It’s Time to End the War on Fat: Dietary Fat Doesn’t Make You Fat or Give You Heart disease.

Most cardiologists don’t spend a lot of time talking about diet with their patients. When they do, they usually cite the mainstream maxim that you should cut down on saturated fat by reducing red meat consumption, choosing low-fat or skim dairy products, and lean cuts of meat. Patients are referred to standard recommendations that conform to this advice that comes from the American Heart Association.
This is certainly what I did for 30 years until I started examining the research supporting these recommendations in detail. It’s a lot easier to give advice to your patients when it conforms to what they are hearing from nutritional authorities. If it doesn’t conform, you have a lot of ‘splaining to do. If doctors spend time teaching or discussing diet with our patients, we do not get reimbursed for it.
However, a close examination of the research on dietary fat and heart disease shows that there is no good evidence supporting these recommendations.
The two major fallacies are:
Eating high fat foods will make you fat.
Eating high fat or cholesterol laden foods raises your cholesterol, thereby promoting the development of heart disease

Although these concepts have become ingrained in the consciousness of Americans, they are not supported by scientific studies; more and more researchers, nutritional scientists, and cardiologists are sounding the warning and trying to change the public’s understanding in this area.
It seems logical that the fat that we consume goes into the body and is then converted into fat that appears on our thighs or belly and lines our arteries. This logic, and weak epidemiologic studies, led to national nutritional recommendations, beginning in 1977, that Americans cut back on fat (particularly saturated fat). The food industry seized on these recommendations and began providing consumers with “low-fat” alternatives to standard foods. To make these low-fat foods palatable, sugar had to be added. Often,  due to a surplus of industrial farm produced corn, sweetening was accomplished with high-fructose corn syrup. This graph shows what happened with weight in the US: 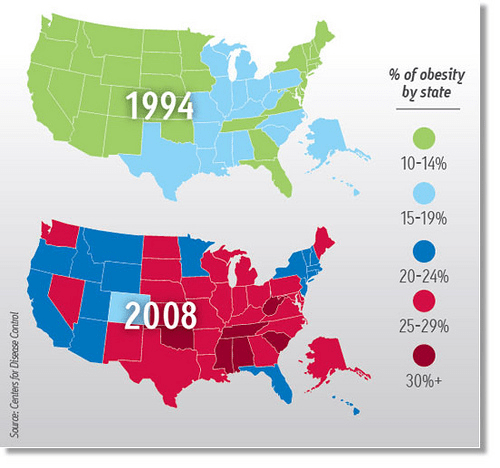 Beginning in the late 1970s, the percentage of people with BMI > 30 (considered obese) increased dramatically.
More and more evidence points to increased consumption of sugar, HFCS, and refined carbohydrates as the root cause of this obesity epidemic.
I tell my overweight patients that reducing sugar and refined starch is the most important thing that they can do to shed excess pounds.  They should avoid processed foods which the food industry have manipulated to make more palatable and less healthy. This means, among other things, avoiding or minimizing drinking sugar-sweetened beverages and avoiding “drinking your calories,” cutting way back on donuts, pastries, and potatoes and when consuming pastas or breads, try to make them whole-grain.

I don’t tell my patients to cut fat consumption; this advice runs counter to everything they have heard about diet and heart disease. I encourage them to consume full fat dairy and this is considered particularly heretical.
However, as I have discussed in previous posts, there is no evidence that dairy fat increases cardiovascular risk. In fact, all studies suggest the opposite: a lower risk of heart disease associated with full fat dairy consumption.
Just as all fats are not the same (consider trans, saturated and unsaturated), all saturated fats are not the same. Some, particularly, the shorter chain fatty acids found in dairy, have beneficial effects on the lipid profile and likely lower overall cardiovascular risk.
What about red meat? All of my patients have received the dogma that they need to cut back on red meat. It hasn’t come from me (not since I began looking at the scientific evidence). When I look at my patients’ cholesterol profile before and after they institute what they perceive as the optimal “heart-healthy“ diet (cutting back on saturated fat and increasing carbohydrates by reducing meat consumption and shifting to skim or low-fat dairy products), their LDL or “bad” cholesterol has dropped a little, but proportionally their HDL or good cholesterol has dropped more and their triglycerides have gone up. What is the overall effect of this dietary change? There are no studies demonstrating that this change improves your heart health.
A recent systematic review and meta-analysis of 20 studies which included 1,218,380 individuals found no relationship between red meat consumption and coronary heart disease, CHD, (or diabetes). Conversely, processed meat intake was associated with a 42% higher rate of CHD and 19% higher risk of diabetes.
Analysis of data from the Multi-Ethnic Study of Atherosclerosis population indicates

There also appears to be no association between red meat consumption and mortality in Asian countries
The Womens Health initiative was started in the early 1990s to test the hypothesis that a low fat diet would lower risk of cancer, stroke and heart attacks.Women were aged 50-79 at trial enrollment in 1993-98 and were followed for an average of 8.1 years. By the end of the first year, the low-fat diet group reduced average total fat intakes to 24 percent of calories from fat, but did not meet the study’s goal of 20 percent. At year six, the low-fat diet group was consuming 29 percent of calories from fat. The comparison group averaged 35 percent of calories from fat at year one and 37 percent at year six. Women in both groups started at 35-38 percent of calories from fat. The low fat diet group also increased their consumption of vegetables, fruits, and grains.
The study design reflected a widely believed but untested theory that reduction of total fat would reduce risks of breast or colorectal cancers. Among the 48,835 women who participated in the trial, there were no significant differences in the rates of colorectal cancer, heart disease, or stroke between the group who followed a low-fat dietary plan and the comparison group who followed their normal dietary patterns.
Yes, “widely believed but untested theory” is a great description of the current recommendation to cut saturated fat because no prospective trial has proven any benefit to this approach in reducing cardiovascular disease.
There is some evidence (but still fairly weak) to support the idea that replacing saturated fat with unsaturated fat is beneficial. Thus, the popularity of the Mediterranean diet which utilizes olive oil liberally. There is good evidence that industrially produced trans-fatty acids (from products designed to take the place of inappropriately demonized butter) increase cardiovascular risk. However, this evidence does not extend to natural trans-fatty acids such as those coming from the udders of cows.
Mounting evidence suggests that replacing fat or saturated fat in the diet with carbohydrates, however, contributes to obesity, insulin resistance, diabetes, and thereby may increase your risk of cardiovascular disease.

18 thoughts on “It’s Time to End the War on Fat: Dietary Fat Doesn’t Make You Fat or Give You Heart disease.”