The Skeptical Cardiologist occasionally wanders into the Doctors Lounge at the hospital and surveys the food choices available to him. One morning, descried amongst the carbohydrate bonanza of donuts, pastries, bagels and muffins was a bin containing little tubs of substances that could be spread on a bagel of slice of bread.
The choice was between something called Promise Buttery Spread
and Wholesome Farms Whipped Butter.. 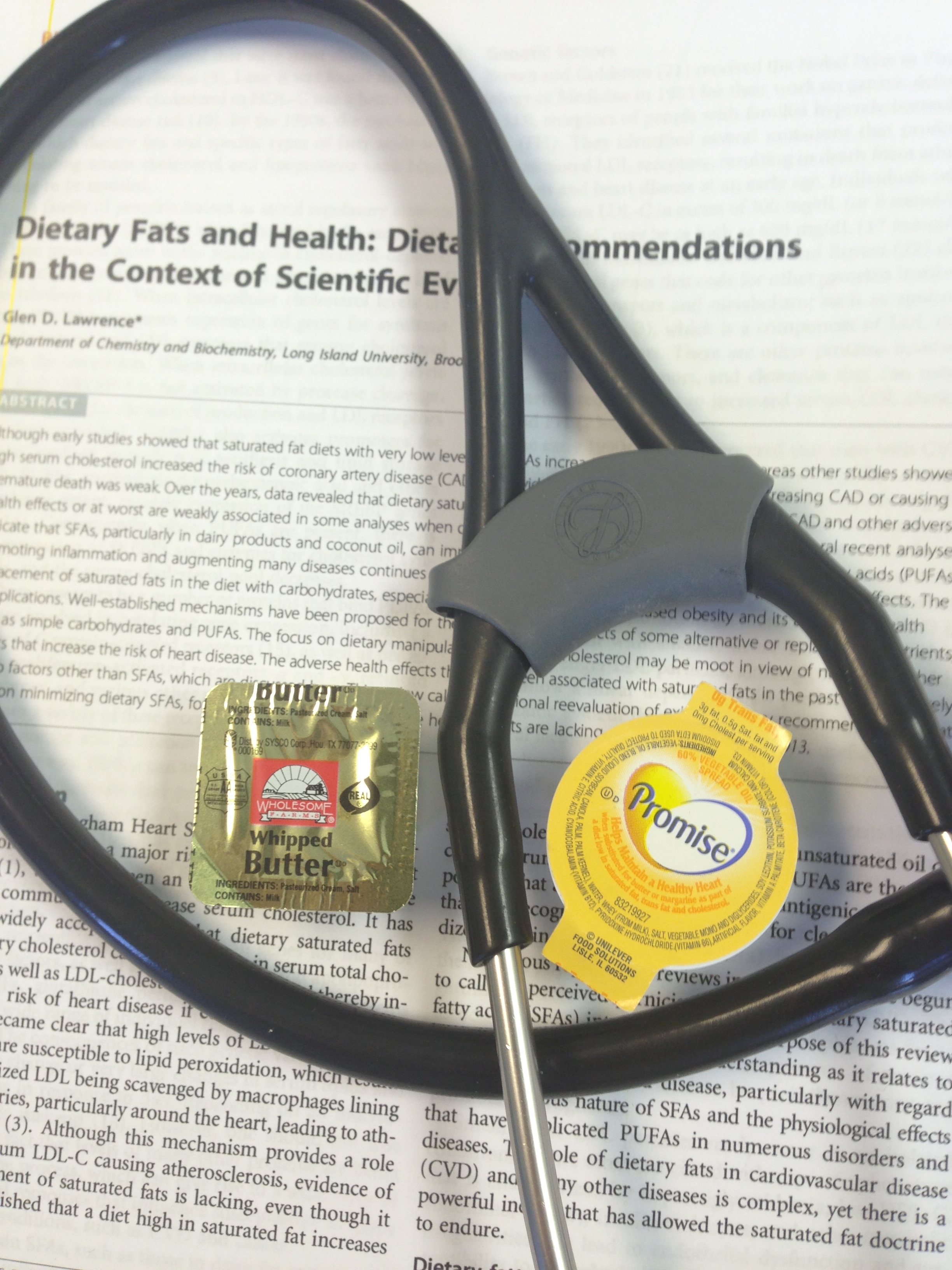 Conventional Wisdom and the recommendation of almost every nutritional authority for the last 30 years tells me that I should choose the Promise Buttery Spread. I would have taken this choice 5 years ago in the belief that butter with its high content of saturated fat was to be avoided. I used to spend a considerable amount of time in the pseudo-butter portion of the grocery aisles trying to determine which, of the myriad of competing alternatives, would be better than butter.
But, as I’ve noted in previous posts, the authorities have gotten it wrong.  Let’s look carefully at the two choices.

Certainly the packaging would suggest that this is a “promising” choice.  It says very clearly in the small print circling the outside of the tub: “heart healthy when substituted for butter.” If you’d like to read the arcane FDA rules on which foods can make this sort of claim, they are here. Basically, if the product has less fat, saturated fat or cholesterol than butter it can make this claim.
From the website of Unilever, the giant food processing conglomerate that makes Promise and all of its siblings, we learn that Promise contains 8 grams of fat, 1.5 grams of which are saturated fat. Uniliver is very happy to provide you with the macronutrient content of Promise and its various variations. After all, they spent a lot of time researching what combination of fats, protein and carbohydrates would satisfy consumers desire for a heart-healthy substitute. Canola oil turns out to be high in monounsaturated fats just like olive oil, the major fat consumed in the heart-healthy Mediterranean diet
But how did they come up with this fine ratio of unsaturated to saturated fats? What actually goes into it?
Here are the ingredients (not obtainable from Unilever’s web site but from another source that, presumably could read the small print that I could not read on the little tub of Promise)
Vegetable Oil Blend (Liquid Soybean Oil, Canola Oil, Palm Oil, Palm Kernel Oil), Water, Whey (Milk), Salt, Vegetable Mono and Diglycerides, Soy Lecithin, (Potassium Sorbate, Calcium Disodium EDTA) Used to Protect Quality, Vitamin E Acetate, Citric Acid, Pyridoxine Hydrochloride (Vitamin B6), Artificial Flavor, Maltodextrin (Corn), Vitamin A Palmitate, Beta Carotene (Color), Cholecalciferol (Vitamin 13), Cyanocobalamin (Vitamin B12).
That’s 21 ingredients, most of which are made in a factory and added back to the mixture of exotic vegetable oils, most of which is canola oil.
What is Canola Oil? Does it come from a canola plant or seed?
A good source of information (and presumably positive) is the Canola Council web site which gives the history of Canola Oil. It all begins with oil from the seed of the rape plant, a crop grown in Canada.

Rapeseed oil naturally contains a high percentage (30-60%) of erucic acid, a substance associated with heart lesions in laboratory animals. For this reason rapeseed oil was not used for consumption in the United States prior to 1974, although it was used in other countries. In 1974, rapeseed varieties with a low erucic content were introduced. Scientists had found a way to replace almost all of rapeseed’s erucic acid with oleic acid, a type of monounsaturated fatty acid.

The Canola council website says that this process of developing rapeseed with low levels of the toxic erucic acid was not accomplished by genetic engineering, but the nongmoproject.org indicates 90% of Canola oil qualifies as genetically modified.
More history from the Canola Council:

By 1978, all Canadian rapeseed produced for food use contained less than 2% erucic acid. The Canadian seed oil industry rechristened the product “canola oil” (Canadian oil, low acid) in 1978 in an attempt to distance the product from negative association with the word “rape.” Canola was introduced to American consumers in 1986. By 1990, erucic acid levels in canola oil ranged from 0.5% to 1.0%, in compliance with U.S. Food and Drug Administration (FDA) standards.

How is Canola Oil Processed?

Again, the Canola Council provides their summary of the process here.
Unlike olive oil which is just expeller expressed from olives, canola oil goes through quite a bit of processing. After pressing, about half of the oil is left, and the remainder is extracted by a solvent called hexane (interestingly, there is a controversy in the world of veggie burgers since hexane is used in processing soy and residual levels of this “neurotoxin” have been detected). This oil then goes through processes called degumming (which often involves mixing with acid), bleaching and deodorizing. To make a more solid form it is heated to hydrogenate the oil or palm kernel oil is mixed with it.

Is Canola Oil healthier than butter?

Unfortunately, none of this research involves canola oil so it is not really applicable. In the 1980s, at the urging of health authorities, the food industry went through a similar process and created butter substitutes that utilized oils hydrogenated in a factory. The result was the consumption by the public of large amounts of trans-fats which subsequent research has shown to be great promoter of coronary heart disease. Does it make sense to put our trust in these newer , factory produced ,butter substitutes?
There are NO STUDIES that would indicate substituting canola oil for butter is a heart-healthy choice. Personally, I have grave concerns about consuming a product that has gone through such a tortured process in order to make it appear safe and palatable.
In the Doctor’s Lounge, my butter choice lists pasteurized cream and salt as the ingredients. I like that, it’s simple and straightforward. I know that most studies that have looked at consumption of dairy fat have found that it lowers risk of heart disease. Wholesome Farms is a Sysco, Inc. label and Sysco says

I have tried to contact Sysco to get more information on where my little tub of butter came from and what the cows were fed but have gotten no information.

The choice between a highly processed, genetically modified, industry promoted vegetable oil (or blend of oils) which has been manipulated to resemble a healthy natural vegetable oil and never shown to be safe or healthy in humans, versus butter, is clear to me. Give me butter every time. I’m not excited about the fact that I can’t be sure the milk used in this little tub of butter came from pasture-raised, grass-fed cows. However, I realize that compromises have to be made for convenience sometimes. I’d rather eat the butter from unknown cows than the vegetable oil from a known factory.