Searching for Subclinical Atherosclerosis: Am I about to drop dead?

Nearly every day I see a patient in the office who has just experienced a friend or relative suddenly “dropping dead.”  Understandably, they are very concerned about this and want to know “Is this going to happen to me?”
There is very good reason to be concerned. Cardiac disease is the leading cause of death in America. Despite considerable progress, regrettably 50% of deaths occur suddenly, without any previous symptoms which would have suggested a cardiac problem. It doesn’t just hit the overweight or the smoker. It not uncommonly strikes the very fit and seemingly healthy, as in the case of the St. Louis Cardinal pitcher, Daryl Kile, who was found dead in his hotel room at the age of 34. This question of who is going to suddenly drop dead (sudden cardiac death or SCD) is one of the fundamental unsolved mysteries in current cardiology.

Most SCD in individuals over the age of 35 is related  to the development of fatty plaques (atherosclerosis) in the arteries that supply blood to the heart (coronary arteries) and the subsequent sudden rupture of these plaques (thrombosis). 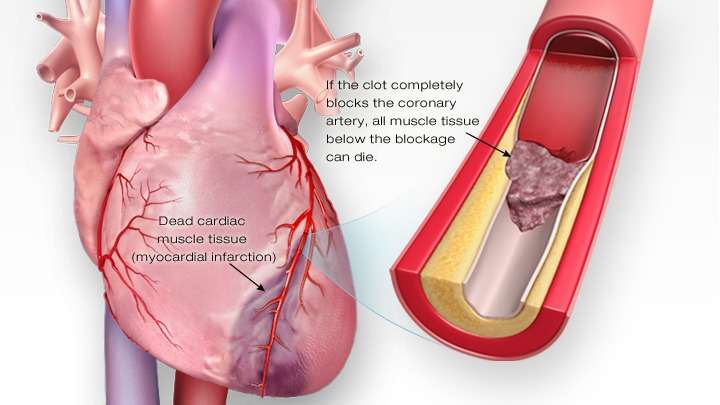 The result of this rupture is the complete blockage of the artery and the total cessation of blood flow to a portion of the heart muscle. When that heart muscle portion becomes starved for oxygen, the muscle cells start dying and a myocardial infarction (MI) or heart attack occurs. You can view an animation of this process here With any MI, the dying muscle cells can become electrically irritable and initiate an abnormal heart rhythm called ventricular tachycardia (VT) or ventricular fibrillation (VF). This abnormal rhythm is what causes people to “drop dead” suddenly. Basically, the heart cannot pump blood efficiently in VT or VF; thus, there is no blood flowing to the brain and other vital organs. This is a long, complicated chain of events, but basically it begins with the development of fatty plaques or atherosclerosis. It makes sense that we can stop people dropping dead from MI by stopping the development and progression of atherosclerosis. Atherosclerosis develops long before any clinical signs or symptoms of disease. You can feel totally fine and have a huge build up of plaque in all of the arteries of your body. This is termed subclinical atherosclerosis. It makes sense, and it has been scientifically proven, that those with a huge buildup of plaque (high plaque burden) are at higher risk for MI and death than those with low or no plaque burden. It also makes sense that treating those patients with high plaque burden will be most beneficial.

How Do you know if you have atherosclerosis

I discussed the standard recommended method for determining risk of MI/SCD in my last post on statins. Basically, this is simply adding up the factors we know contribute to atherosclerosis: diabetes, cigarette smoking, hypertension, age, gender and cholesterol levels. However, most heart attacks and strokes occur in people who are classified by traditional risk factor scoring as low or intermediate risk. Conversely, others are misclassified as high risk and mistakenly advised to take drugs to reduce their risk factors for the rest of their lives.

How Can We Detect Subclinical Atherosclerosis?

In my office practice I offer patients two tests which directly detect and quantify subclinical atherosclerosis. One looks for plaque  and thickening in the larger arteries of the neck, the carotid arteries, and one looks for calcium in the coronary arteries. I’ll go into detail about both of these in subsequent posts. For now, I will just say that the carotid screening technique uses harmless ultrasound while the coronary calcium technique uses ionizing radiation from a CT scan. Neither test is covered by insurance or Medicare. Both tests have been shown to improve our ability to identify those at risk for MI and stroke.
These tests are helpful in two general areas:
*The first scenario is the patient who appears to be at low or intermediate risk for atherosclerosis based on the risk estimator, but who has a strong family history of MI, sudden death or stroke. If we identify significant subclinical atherosclerosis in this patient, statin therapy is more likely to be beneficial.
*The second scenario is the patient who has been put on statins for primary prevention based on standard risk estimator but has no family history of ASCVD and is questioning the need for treatment. In this patient if we find no subclinical atherosclerosis, a strong argument can be made to stop the statin drug.

There is an organization dedicated to promoting the detection of SA by these tests and an algorithm for treatment called SHAPE  (Society for Heart Attack Prevention and Education). Interestingly, after a female Texas state representative suffered an MI, in 2009, Texas Governor Ricky Perry signed off on the Texas Heart Attack Prevention Bill mandating health-benefit plans to cover screening tests for SA. No other state to my knowledge has such a law.

How to Stop Sudden Cardiac Death

The two tests I mentioned are a good second step towards identifying the individual at risk for MI and SCD but we still don’t know who among those with advanced subclinical atherosclerosis is going to experience a sudden rupture of plaque, have an MI and drop dead.
We need a way to identify those patients with vulnerable plaque (one that is about to rupture) and aggressively treat those patients. This is an area of intense research focus. You can view a fascinating video (accompanied by weirdly cool music) created by SHAPE here and another (featuring a gun shooting a heart) here emphasizing the importance of the vulnerable plaque.

19 thoughts on “Searching for Subclinical Atherosclerosis: Am I about to drop dead?”