The skeptical cardiologist participated in the Pedaler’s Jamboree this Memorial Day weekend. This is an annual bicycling/music festival centered around a 30 mile bike ride from Columbia to Boonville, MO along the KT trail as it tracks the Missouri River. It ends at Kemper Park in Boonville with a concert and campout (the highlight of which for me was SHEL)

music. Our favorite moment was listening to an awesome duo from Fort Wayne, Indiana, the White Trash Blues Revival, in a downpour at the McBaine stop. The lead singer/guitarist played a home-made lap steel (made from a skate board and a Red Stripe beer bottle) and the drummer played trash cans, a beer keg and a cardboard box with outstanding results.
During the day, I observed thousands of my fellow pedalers consuming hot dogs and bratwursts at the various stops. In America, during Memorial Day weekend, several million brats and dogs will be consumed which made me ponder: is this increasing Americans’ risk of dying from heart disease?

US dietary-guidelines recommend “eating less” red and processed meat. For cardiovascular disease, these recommendations are based largely on expected effects on blood cholesterol of saturated fat and dietary cholesterol in meats. However, multiple recent published analyses have found no relationships of meat intake with cardiometabolic disease outcomes, including coronary heart disease (CHD), stroke, and diabetes.
This is a really important fact to know when making food choices, so I’m going to highlight it and repeat it:

Scientific studies do not show an association between unprocessed red meat consumption and cardiovascular disease.

“Red meat” is usually defined as unprocessed meat from beef, hamburgers, lamb, pork, or game, and excludes poultry, fish, or eggs.
“Processed meat” is any meat preserved by smoking, curing or salting, or addition of chemical preservatives, such as bacon, salami, sausages, hot dogs, or processed deli or luncheon meats, excluding fish or eggs.
A 2010 meta-analysis of American studies on this showed no increased risk of coronary heart disease for the highest consumers of unprocessed meat versus the lowest.
On the other hand, each serving per day of processed meat was associated with a 42% higher risk of coronary heart disease.  Restricted to US studies, each serving per day was associated with 53% higher risk of diabetes.
A recent European study of 448,000 people found no association between unprocessed red meat consumption and mortality. For processed meats, there was an 18% higher risk of death per 50 gm/day serving.
Scientists really don’t know what it is about processed red meat that makes it associated with higher mortality.
As the table below indicates, the amount of saturated fat and cholestero 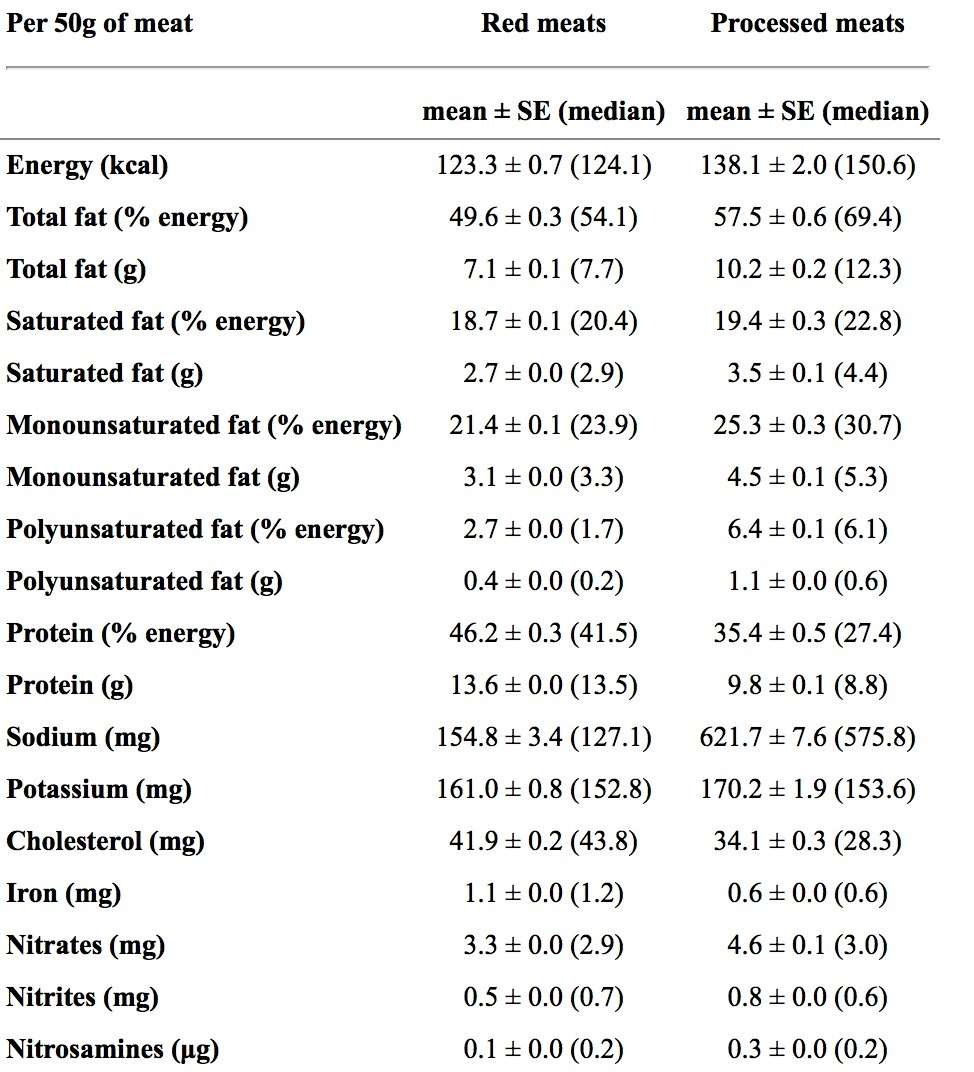 l is not higher, so that does not appear to be the cause.
Because sodium nitrite is used to cure most processed  meats, processed meats have about 4 times the amount of sodium as red meats.
High dietary sodium intake significantly increases blood pressure. Habitual consumption may also worsen arterial compliance and promote vascular stiffness, so It’s possible this is a factor.
Nitrate and nitrite levels are about 40% higher in processed meats and this has been suggested as a contributor to higher CVD and cancer rates.
However, 80-95% of dietary nitrates come from vegetables sources and a very significant source of nitrites is the breakdown of nitrates to nitrites by bacteria in saliva. Recent studies suggest that the blood pressure lowering effect of vegetables may be mediated by their nitrate content.
A recent review concluded

So, there is a signal from observational data that processed meats may increase cardiovascular disease and death, but exactly which ones might be the culprits and how this might work is entirely unclear. I’m still consuming brats, sausages,  and hot dogs on occasion. Riding a bike, listening to music and drinking beer is a fine occasion for that.
I would advise the following