Heart attacks and most sudden cases of sudden death are due to rupture of atherosclerotic plaques. Thus, it makes sense to seek out  such plaques, a process I call searching for subclinical atherosclerosis. I’ve talked about using high frequency ultrasound of the carotid arteries to the brain to look for plaque and for carotid IMT in earlier posts here and here.
There is a third method that looks directly at the coronary arteries, which supply blood to the heart.  It is variously called a heart scan, coronary calcium score, or cardioscan, and it is more widely utilized amongst physicians who are serious about preventing cardiovascular disease.
This technique utilizes the ionizing radiation inherent in X-rays to perform a CT examination of the chest. It does not require injection of any dye or the puncture of any arteries; thus, it is considered noninvasive and has no risk or pain associated with it.
When atherosclerosis first begins to form in the arteries, it generally takes the form of “soft” plaques. Soft plaques are initially full of lipids, but after a period of time, the plaques undergo change: calcium begins to deposit into this plaque.
There is a direct relation 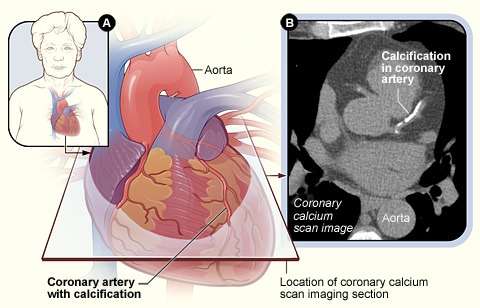 How Is The Calcium Score Used To Help Patients?

The calcium score can be utilized (in a manner similar to the carotid IMT and plaque) to help determine whether a given individual has more advanced atherosclerosis than we would predict based on their risk factor profile. A score of zero is consistent with a very low risk of significantly blocked arteries and confers an excellent prognosis. On the other hand, scores of >400 indicate extensive atherosclerotic plaque burde , high risk of heart attack, and high likelihood of a significantly blocked coronary artery.
The calcium score (similar to the carotid IMT) increases with age and is higher in males versus females at any given age. We have very good data on age and gender normals. The average 50-59 year old woman has a zero score, whereas a man in that age range has a score of 30. The average man has developed some CAC by the fourth decade of life whereas the average woman doesn’t develop some until the sixth decade. More advanced CAC for age and gender is a poor prognostic sign. You can plug your own age, gender, race and CAC score into a calculator on the MESA (Multi-ethnic Study of Atherosclerosis) website here.
2013 ACC/AHA Guideline on the Assessment of Cardiovascular Risk says the following

This guideline recommended utilizing a  CAC score of >300 Agatson Units or >75th percentile for age, gender and ethnicity as a cut-off.

A forty-something year old man came to see me for palpitations. He had a stress echo which was normal except for the development of frequent PVCs and a brief run of non sustained ventricular tachycardia.  His risk factor profile was not particularly bad: no diabetes, hypertension, or cigarette smoking and an average lipid profile. When I calculated his 10 year risk of ASCVD using my iPhone app it came out at 7%: below the level at which statin treatment would be recommended.  Because his father had a coronary stent in his fifties (this does not qualify as a family history of heart disease according to the new guideline, by the way)  I recommended he get a CAC test done.
His CAC score came back markedly elevated, almost 1000.  .  A subsequent cardiac catheterization demonstrated a very high-grade coronary blockage iwhich was subsequently stented. I started him on high intensity statin therapy and he has done well.

Many individuals with high cholesterol values do not develop atherosclerosis.  A zero CAC score in a male over 50 or a woman over 65 (or non-zero CAC score that is <25th percentile for age, gender, ethnicity) indicates that they are not developing atherosclerosis and makes it less likely that they will benefit from statin therapy to lower cholesterol.

Some Caveats About CAC score testing

-Like carotid vascular screening, there is no reason to get a CAC test if you already have had problems related to blocked coronary arteries such as a heart attack or coronary stents or coronary bypass surgery.

-CAC score testing is not covered by insurance (except in Texas) and costs somewhere between $125 and $300 out of pocket.

-The CT scan leads to a small amount of radiation exposure-approximately 1 – 2 milliseiverts of radiation (mSv). To puts things in perspective, the annual radiation dose we receive from natural sources is around 3 mSV per year.

Some of the other approximate radiation doses for tests commonly used in medicine are:

37 thoughts on “Searching for Subclinical Atherosclerosis: Coronary Calcium Score-How Old Is My Heart?”