Cheerios, Soluble Fiber and Your Heart 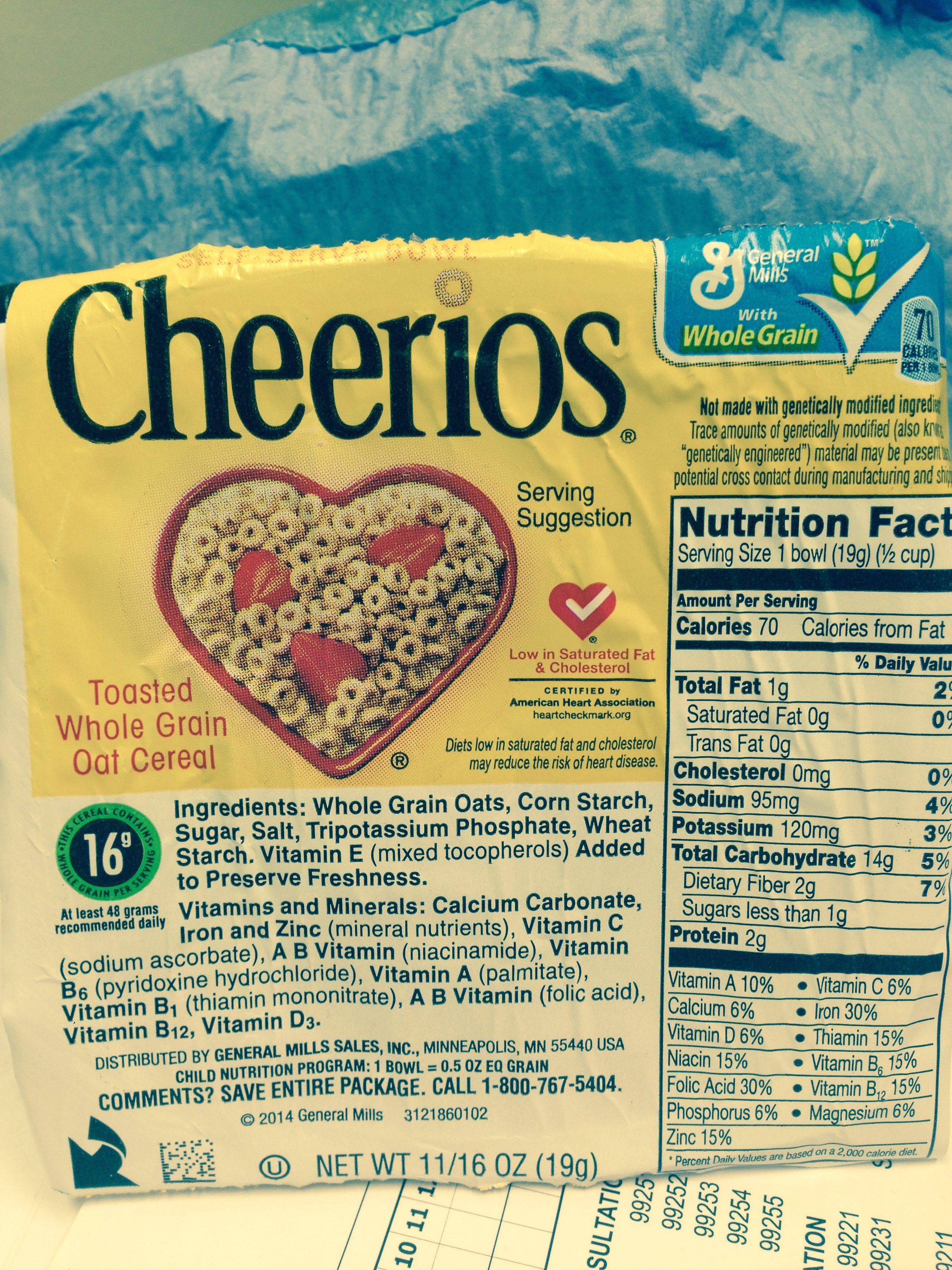 The skeptical cardiologist usually eschews the breakfast offerings in the Doctor’s lounge. I’m not really interested in consuming donuts, muffins, or bagels with their high carbohydrate load. As I’ve ranted out about previously, the only yogurt available is Yoplait low fat , highly sugared-up yogurt which is arguably worse than starting the day with a candy bar.
A selection of breakfast cereals is available including Cheerios, Raisin Bran, and Frosted Flakes. Occasionally, when I have neglected to bring in my own yogurt, granola and/or fruit I will open up one of the Cheerios containers and consume a bowl mixed with 2% milk (full-fat, organic milk which I passionately advocate here and here is not available)
Pondering the Cheerios packaging and the cute little O’s made me wonder whether this highly processed and packaged food with a seemingly endless shelf life was truly a healthy choice.

The “ready-to-eat”  and allegedly heart-healthy cereal

Cheerios and Honey-nut cheerios were  the #4 and #1 breakfast cereals in the US in 2013, generating almost a billion dollars in sales. Both of these GM blockbusters undoubtedly have reached their popularity by heavily promoting the concept that they are heart healthy.
The Cheerios label is all about the heart. The little O’s sit in a heart-shaped bowl. A prominent red heart with a check inside it attests to the AHA having certified Cheerios as part of its checkmark.heart.org program. Additional text states “low  in Saturated fat and cholesterol” and “diets low in saturated fat and cholesterol may reduce the risk of heart disease.”
For those concerned about GMO  the package also states “not made with genetically modified ingredients”

Is the Fiber in Cheerios “heart-healthy” ?

Beta-glucan is a soluble fiber primarily located in the endosperm cell wall of oats. Early studies showed that oats and beta-glucan soluble fiber could reduce total and LDL (bad cholesterol) levels. The mechanism isn’t really known. (see the end of post for possible mechanisms). The Quaker oats web site oversimplifies the mechanism thusly :
“In your digestive tract, it acts as a sponge, soaking up cholesterol and carrying it out of the body”
This narrative fits with the oversimplified and now discredited descriptions of atherosclerosis which attribute it directly to consumption of cholesterol and fatty acids. See here if you’d like to appreciate how complex the process truly is.

In 1997, the FDA reviewed 33 studies (21 showing benefit and 12 not) and decided to allow a health claim for foods that contain oats and soluble fiber. A minimum dose of 3 grams/day of oat beta-glucan was suggested for a beneficial reduction in blood cholesterol and (presumably, although never documented) a subsequent decline in coronary heart disease.
In 1998 Johnson, et al, published the results of a study funded by a grant from General Mills that showed that  inclusion of whole grain oat ready to eat cereal providing 3 grams of beta-glucan as part of a low fat diet reduced  LDL cholesterol by 4% after 6 weeks. HDL was unchanged. Patients in this study consumed 45 grams (1.5 oz) of cheerios at breakfast and then again in the evening. There was a total of 3 grams of soluble fibre in this amount of Cheerios. A control group consumed corn flakes in a similar fashion without change in LDL.
General Mills took this weak data and ran with it and began posting on Cheerios the following statements

Should We Be Treating High Cholesterol or Preventing Heart Disease?

The FDA was telling General Mills that it was OK to say that Cheerios may reduce heart disease but not that it can reduce cholesterol because that made it a drug. It makes no sense.
The only thing that had been demonstrated for oat soluble fiber and Cheerios in particular was a reduction in cholesterol. There has never been a study with oats showing a reduction in heart disease..
It’s the heart disease, the atherosclerosis clogging our arteries and causing heart attacks and strokes that we want to prevent. We could care less about lowering cholesterol if it doesn’t prevent atherosclerosis.
A recent review of studies since the FDA ruling shows that 70% of studies show some reduction in LDL with beta-glucan. Interstingly, the studies which added beta-glucan to liquids were generally positive whereas addition to solids such as muffins usually did not show benefit.
I’m going to accept as evidence-based the claim that whole oats can lower your LDL about 7% if you consume a very large amount of them on a daily basis.
However, the critical question for any drug or dietary intervention is does it prevent atherosclerosis, the root cause of heart attacks and strokes. There has been in the past an assumption that lowering cholesterol by any means would result in lowering of atherosclerosis. This theory has been disproven by recent studies showing that ezetimibe and niacin which significantly lower LDL do not reduce surrogate markers of atherosclerosis or cardiovascular events any more than placebo when added on to statin drugs. The recently revised cholesterol guidelines endorse the concept of treating risk of atherosclerosis rather than cholesterol levels.

Eat Real Foods, Mostly Plants, Not Too Much

If you follow Michael Pollan’s simple dictum you will get plenty of fiber, soluble or otherwise and you will avoid the necessity to obsess over the macronutrients in your diet, fiber or otherwise. Throw in some cheerios and oatmeal every once in a while if you like them, in their unadulterated state they are a healthy food choice.
To quote David Katz

Wholesome foods in sensible combinations, as prevail in the world’s Blue Zones, seemingly take care of all nutrients, by focusing on none. Such dietary patterns can be low in fat, as vegan and traditional Asian diets tend to be; or high in fat, as Mediterranean diets tend to be. Variations on a common theme nicely accommodate personal preference, allowing us all to find a dietary pattern to love that loves our health back.

As promised, for those with inquiring minds and oatmeal-induced fortitude, I present from a recent review of fiber some discussion of proposed mechanisms of cholesterol lowering

The mechanism by which fiber lowers blood cholesterol remains undefined. Evidence suggests that some soluble fibers bind bile acids or cholesterol during the intraluminal formation of micelles. The resulting reduction in the cholesterol content of liver cells leads to an up-regulation of the LDL receptors and thus increased clearance of LDL cholesterol. However, increased bile acid excretion may not be sufficient to account for the observed cholesterol reduction. Other suggested mechanisms include inhibition of hepatic fatty acid synthesis by products of fermentation (production of short-chain fatty acids such as acetate, butyrate, propionate) ; changes in intestinal motility; fibers with high viscosity causing slowed absorption of macronutrients, leading to increased insulin sensitivity; and increased satiety, leading to lower overall energy intake.

and their take on soluble fibers overall importance

The modest reductions in cholesterol expected from intakes of soluble fiber within practical ranges may exert only a small effect on the risk of heart disease. For example, daily intake of 3 g soluble fiber from either 3 apples or 3 bowls (28-g servings) of oatmeal can decrease total cholesterol by ≈0.129 mmol/L (5 mg/dL), a ≈2% reduction. On the basis of estimates from clinical studies of cholesterol treatment,, this could lower the incidence of coronary artery disease by ≈4%.

and a comment on publication bias: the finding that studies that do not show a positive effect of the intervention tend not to get published.

Publication bias toward studies that showed positive results is always a potential issue in meta-analyses and could be operating in this study. If this were true, then the small effect estimates associated with intake of dietary soluble fiber would be further attenuated, further highlighting the need for conservative public health claims. The major benefit from eating fiber-rich foods may be a change in dietary pattern, resulting in a diet that is lower in saturated and trans-unsaturated fats and cholesterol and higher in protective nutrients such as unsaturated fatty acids, minerals, folate, and antioxidant vitamins.

2 thoughts on “Cheerios, Soluble Fiber and Your Heart”