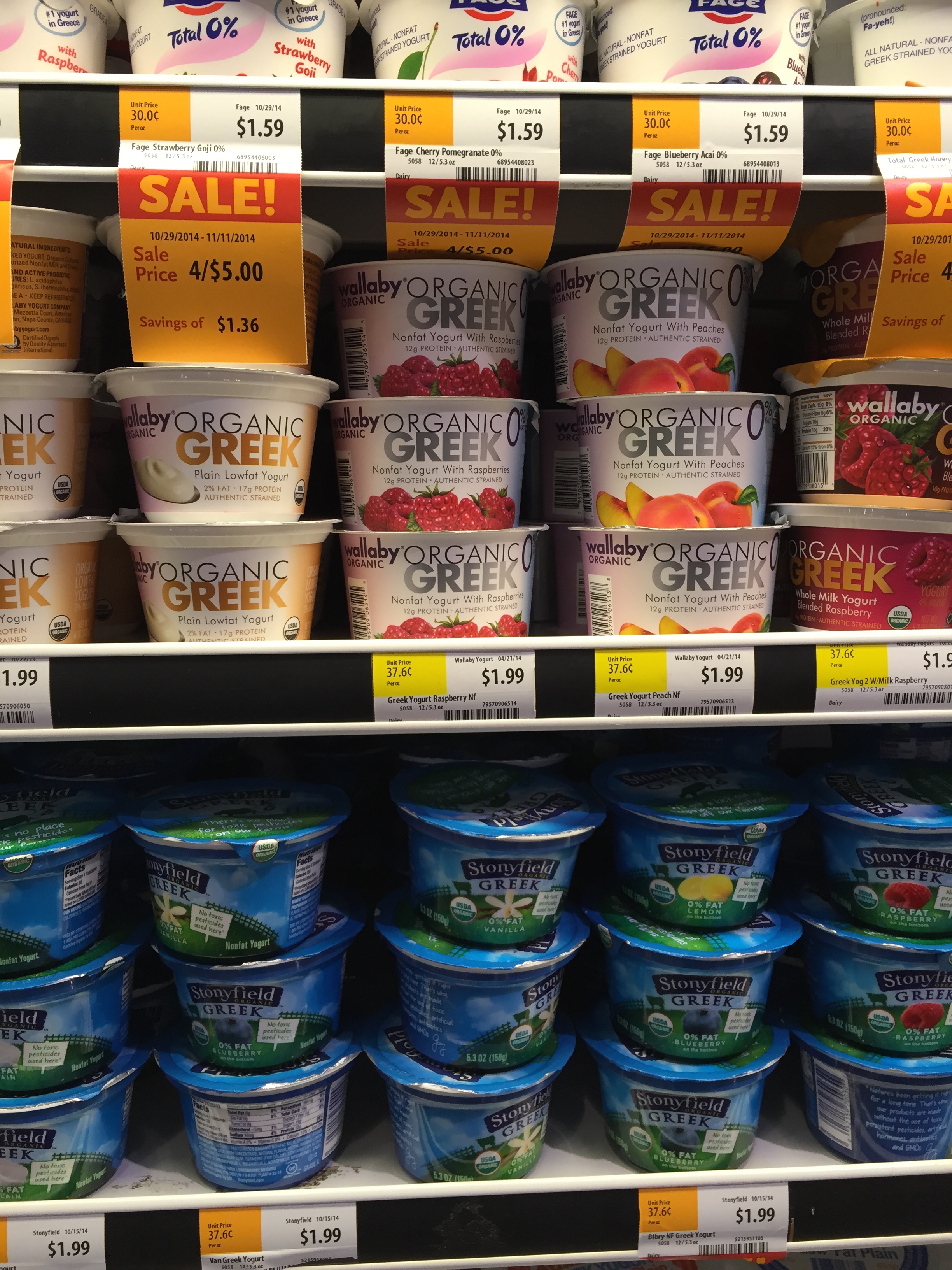 Greek Yogurt sales have skyrocketed  in the last five years by 2500%, driven by a perception that it is a “natural” food, healthier than regular yogurt. Plastic bins of Oikos, Fage  or Chobani Greek Yogurt are dominating supermarket dairy section shelves.
The doctor’s lounge refrigerator still has excluisvely Yoplait non fat yogurt which I have written about here and compared to a Snickers bar here.
Greek Yogurt typically costs twice as much as regular yogurt but affluent women are choosing it because when the natural dairy fat is removed from the milk  it is high in protein, very low in fat, convenient and (apparently) tastes good.

What makes a yogurt Greek?

Traditionally Greek yogurt is made by straining regular yogurt through a t-shirt or cheese cloth for a few hours thus separating out the liquid whey component. The whey contains the milk sugar, lactose, and the  whey protein and is acidic. The resulting yogurt is thicker, has less lactose and a higher protein content.
There are no regulations requiring that yogurt labeled Greek yogurt be created in this way and some yogurt makers have utilized the wonders of food processing and technology to add certain thickeners (powdered protein or starch) to regular yogurt , mimicking Greek yogurt and labeling it as such.
You can make Greek yogurt yourself by straining it in a refrigerator for a few hours. You’ll find the liquid whey in the bowl below the strainer. The large manufacturers of Greek Yogurt, Fage and Chobani  in their large factories in upstate New York are creating so much Greek yogurt they have a problem disposing of the  acidic whey . Ultimately, Chobani has begun paying farmers to take the whey and it is fed to livestock.

Chobani has become the #1 American Greek yogurt by convincing Americans it is the most natural and healthiest. Chobani’s marketing campaign for its 100 calorie products featured messages on the bottom of the aluminum tops one of which stated “Nature got us to 100 calories, not scientists. #howmatters.” When Piper Klemm, a food scientist read this and tweeted a picture of the lid there was a backlash from scientists which ultimately resulted in Chobani apologizing.
One science writer pointed out in detail the contributions of science to all of the ingredients in the Chobani Cherry product including chicory root fiber which is “largely inulin, a polysaccharide that is only partially digested in the human body. It behaves as a soluble fiber and allows the “5 g of fiber” claim on the label”. Other components which owe their origin to science more than nature are “natural flavors” (various compounds extracted from a plant and blended by a flavorist to resemble cherry flavor), and locust bean gum, a “polysaccharide thickener extracted from the seeds of the carob tree”.
It turns out there is a lot of food processing and technology going into Chobani all natural Greek yogurt. In fact, Chobani’s plant in New York was chosen as Food Engineering’s 2013 Plant of the Year. One of the components of that plant is a “separator” manufactured by Westfalia which uses a centrifuge to separate the whey from the yogurt, thus the process of creating Chobani greek yogurt does not involve “straining” the whey from the yogurt in the traditional manner.
Chobani is also disingenuous in its labeling, attempting to hide added sugar by calling it evaporated cane juice. The New York Post reported in June that two separate class action lawsuits were filed against Chobani and Fage for “Defendants purposefully misrepresented and continue to misrepresent to consumers that their products contain ‘evaporated cane juice’ even though ‘evaporated cane juice’ is not ‘juice’ at all – it is nothing more than sugar dressed up to sound like a healthier sweetener,”
Whole Foods Market, Inc. earlier this year said it will stop selling Chobani Inc. yogurt by early next year to make more room for smaller, exclusive brands, especially those that are organic, or don’t contain genetically modified ingredients.

If you can find a Greek Yogurt on your supermarket shelves that hasn’t gone through extensive engineering manipulation to remove the healthy dairy fat and has not had a lot of sugar added back then it should make a fine addition to your diet.

Unfortunately the vast majority of Greek Yogurt sold in the U.S. is non or low fat and is made palatable by adding lots of sugar.

I agree with Chobani that how matters when it comes to yogurt. The less processing, the better when it comes to how food is produced and I choose yogurt made very simply from organic,  grass-fed cow  milk plus  live cultures like  that from Trader’s Point Creamery (which is, by the way, on the shelves of Whole Foods in both St. Louis and Atlanta)!

1 thought on “Greek Yogurt: Extensively Processed and Marketed To Appear Natural and Healthier”