The skeptical cardiologist has been asked by a number of his patients  “Why are you the skeptical cardiologist?”  In essence, I think they are either asking what does “skeptical” mean or what makes you skeptical and why should I care?
In the About section of this blog I wrote “All of these experiences have taught me to cultivate a healthy skepticism for information that has potential bias.”
Whereas skepticism initially was an approach that doubted the veracity of everything and questioned our ability to know anything, healthy skepticism accepts the veracity of information only after it has been evaluated by a scientific or evidence-based approach.
John Byrne, MD, has a wonderful website, skeptical medicine, which describes in detail the skeptical doctors approach.

The modern skeptic is a scientific skeptic. We use proper science and basic ethics to inform our decisions. We withhold acceptance of claims until proper evidence is presented. We use axioms such as ‘Occam’s Razor’, ‘Extraordinary Claims Require Extraordinary Evidence ‘, and ‘Correlation is Not Necessarily Causation’ to evaluate claims. The skeptic recognizes that humans are prone to biases. We recognize that people defend their biases with logical fallacies. Skeptics understand that we are all prone to such biases and fallacies, even skeptics.  To overcome these tendencies, we must learn about biases and fallacies in order to spot and correct them, especially in our own thinking.

Thus, as a skeptical cardiologist, I am doing my best to use scientific approaches to evaluate recommendations for lifestyle, testing and treatment in the world of cardiology. I do not accept recommendations in these areas from cardiology authorities (American Heart Association, American College of Cardiology guidelines, scientific conferences), media, or the government, without carefully examining the scientific studies supporting them. I seek to eliminate biases that can undermine such studies and recommendations.

The Influence of Drug Money on Doctors

Identifying bias in medical recommendations is essential. Just as our politicians are heavily influenced by campaign contributions from special interests, physicians can also be heavily influenced by special interest spending.
I have tried to eliminate any possibility of pharmaceutical company marketing from influencing my medical decisions. I used to believe that I could accept meals and honoraria from drug companies and not be biased by them. However, several years ago, I realized that any time I spent listening to a heavily biased pharmaceutical representative promoting their product was replacing and/or competing in my brain with information about medications and diseases from unbiased sources. In subtle ways, even to the most ethical doctors, this has been shown to effect prescribing practice. If it didn’t, these companies would not be spending billions promoting their drugs directly to doctors.

The American College of Cardiology and Drug Advertisements

The major professional organization for cardiologists is the ACC or American College of Cardiologists. I get lots of emails from the ACC offering educational opportunities and information on the activities of the college. The ACC also mails me, weekly, the Journal of the American College of Cardiology, the major publication for scientific studies on cardiology in the w 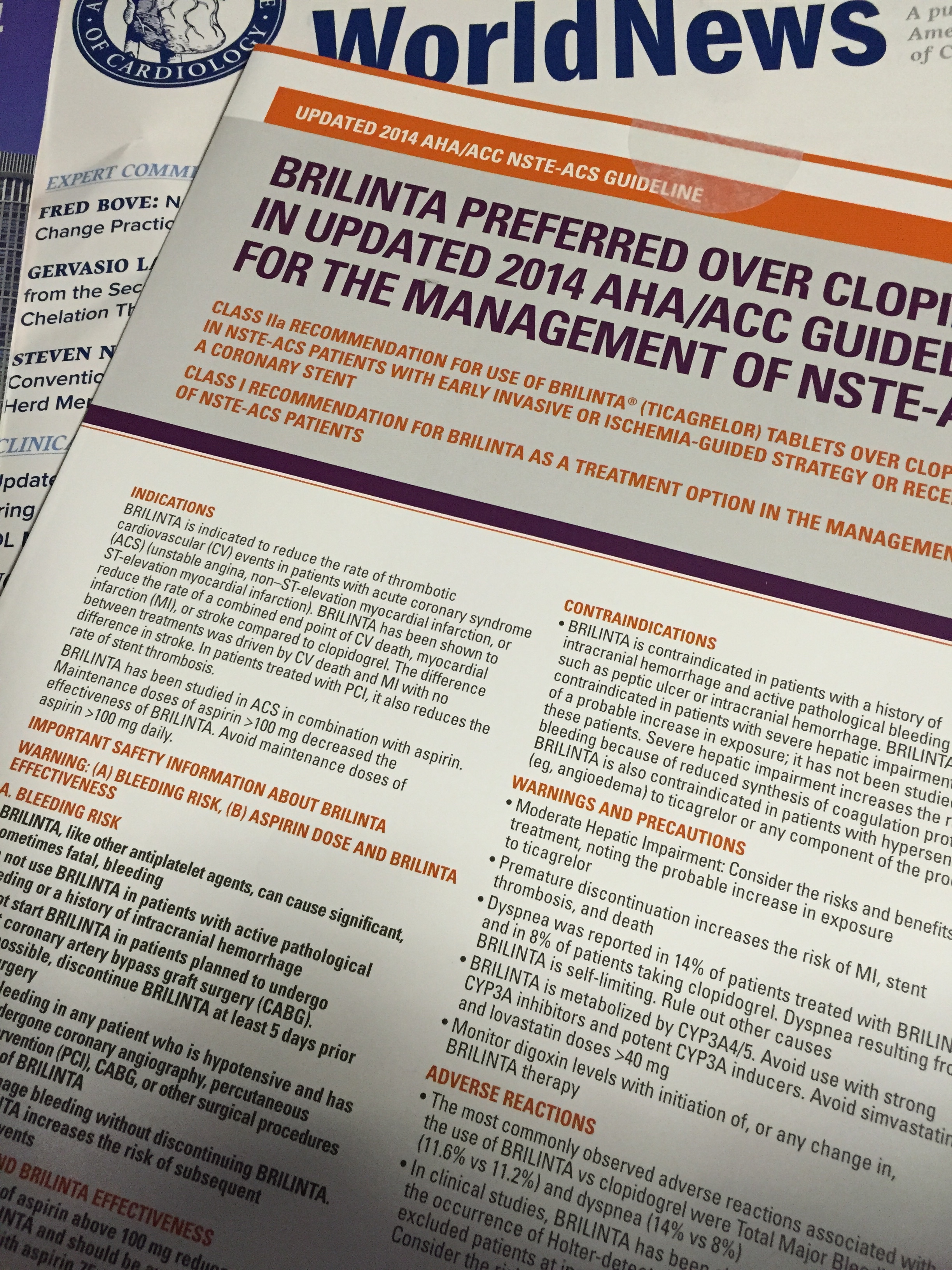 orld. Once a week or so, they send me “Cardiology World News,” which is a summary of relevant articles and developments in cardiology. All of these sources of information from the ACC are riddled with advertisements for drugs. The newer and more expensive the drug, and (it appears) the less the benefit, the larger the advertisements. Accompanying the latest Cardiology World News this last week was the large multipage pamphlet pictured below, touting the fact that Brilinta is “preferred over clopidogrel” for NSTEMI in the updated AHA/ACC guidelines. The skeptical approach is to question the validity of these guideline recommendations by reviewing the studies that they were based on, as well as the possible conflicts of interest of the authors (how many are paid honoraria or have research funded by Astra-Zeneca, the company promoting Brilinta)? 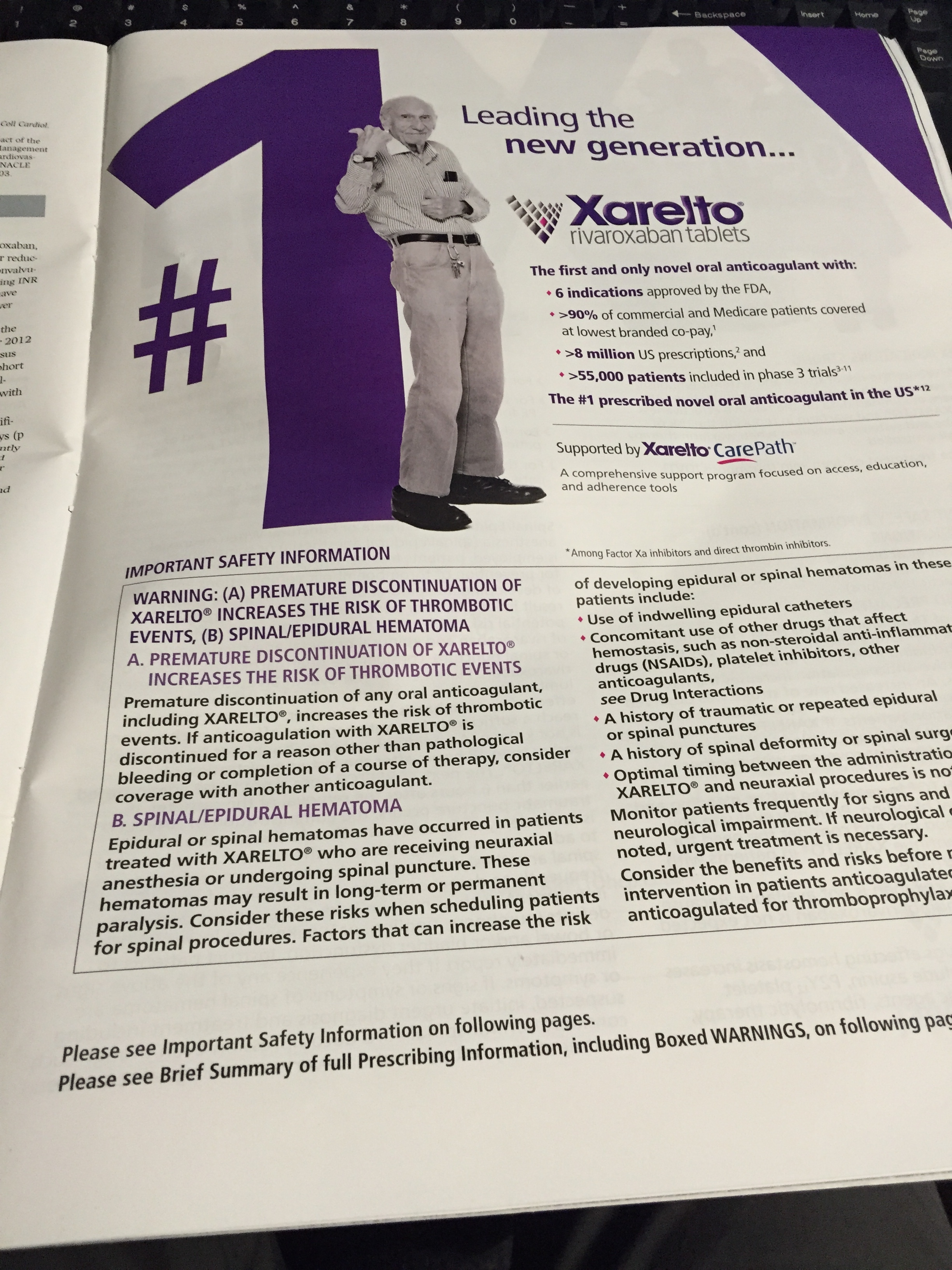 Within the pages of Cardiology World News were several multipage advertisements for drugs, especially for newer oral anticoagulant drugs, such as Xarelto. Even the prestigious Journal of the ACC is stuffed with these annoying advertisements. The emails I get from the ACC often contain banner ads for similar over-priced and over-marketed brand name drugs; the websites of ACC and Medscape are littered with banner ads for drugs. Since I am the skeptical cardiologist, I’ve reviewed the studies that resulted in these drugs being approved, and then make my own conclusions about how to prescribe them to my patients.  Such ads are not useful in my decision making.
When I read journals, studies, editorials or reviews of cardiology information,  I simply want unbiased information. I don’t want my mind cluttered by biased presentations from drug companies.
Why is my professional organization helping to promote these biases?  Obviously, it is for the money.
To the American College of Cardiology I say: “let’s eliminate drug ads from your publications.” With that simple step, we can help reduce the control that pharmaceutical companies have over physicians and move toward ensuring that all of our drug and device recommendations to patients are in their best interest.