The Tie, The White Coat And The Fist Bump

My role models and mentors during my medical training taught me what I considered to be the proper appearance and demeanor of the professional  physician.
The male doctor wore a dress shirt and a tie. The doctor wore a white coat over his/her regular clothes. The more senior the doctor was in the medical hierarchy the longer the white coat and the more impressive the words written on the coat.
Presumably, this professional appearance of the doctor increased the confidence that the patient had in the professionalism of the doctor.
Upon encountering a patient in the hospital room or office exam room, the doctor extends his right hand, greets the patient and smiles and shakes hands.
I wore a tie and a white coat and shook hands consistently during the first 20 years of my practice but gradually these markers of a good doctor have fallen under scrutiny.

The Physician Necktie as Disease Vector

Beginning about 15 years ago studies were published suggesting the physician necktie could become colonized with bacteria and serve as a vector for transmitting bacteria. Some authors, as a result, have called for an end to doctors wearing neckties (bow ties may be an exception).
In the UK, the tie has been banned for those involved in patient care because

“Ties are rarely laundered but worn daily. They perform no beneficial function in patient care and have been shown to be colonised by pathogens.”

After reading about ties as vectors I gradually stopped wearing them at work. Initially, I felt uncomfortable, as if I were not being professional. Somehow, I felt my patients would respect me less. Over time, however, I have reached a point where I only wear a necktie on Wednesdays.
A logical reader might ask why I still wear them at all. I don’t have a good answer for that. Perhaps, I feel a need to wear the dress shirts and ties I have accumulated over the years. Perhaps I don’t really feel the tie is a big contributor to nosocomial infections. Perhaps I want my patients to see that Dr. Pearson can dress professionally on occasion but he chooses not to the majority of the time.
The White Coat As Disease Vector
I’ve been wearing a white coat to make hospital rounds since I was a medical student starting on the wards 37 years ago (Yikes! Has it been that long?). The coat gave me an immediate power and respect and identified me as a caregiver.
My two oldest daughters have both undergone a  “white coat ceremony,” recognizing the important and exciting transition from pre clinical studies to actual patient interactions in the health care field.
The white coat serves other purposes for doctors. I keep my billing cards in one pocket and in another I have a case with my business cards. The lapel serves as a convenient  spot to clip my hospital ID badge. I used to carry around EKG calipers or rulers in my breast pocket but as EKGs have increasingly gone electronic I no longer do this.
Presumably the white coat helps keep dirt and vomit and phlegm from patients from  sullying  the “street” clothes of the physician.
However, the down side of all that stuff landing on the white coat and not on the street clothes may be that the white coat is accumulating bacteria that can then be transmitted to other patients.
In a 2009 study, the white coats of 23% (34 of 149) of medical and surgical Grand Round attendees at a teaching hospital were contaminated with S. aureus, 18% (6 coats) of which were resistant to methicillin.
As a result of studies demonstrating bacterial contamination of white coats, the Society for Health Care Epidemiology of America SHEA recently recommended

White Coats: Facilities that mandate or strongly recommend use of a white coat for professional appearance should institute one or more of the following measures:

Basically, they are strongly suggesting you don’t wear a white coat but if you do, wash it every day and take it off before you interact with the patient.
I must admit it will be difficult for me to stop wearing the white coat. Sometimes I find myself having to pop into the hospital without my white coat (stethoscope around my neck (yes stethoscopes can serve as vectors for bacterial transmission but they can be cleaned between patients)) and I feel like an impostor.
The Handshake As Disease Vector
It has long been my practice to start patient encounter with a hearty greeting and a (somewhat) hearty handshake.
The handshake has a profound cultural role and serves as the international symbol of greeting and departure with connotations of  respect, friendship, congratulations and formal agreement.
In the health care setting, the handshake has been shown to have the power to the improve the perception of the physician’s empathy and compassion. The handshake provides comfort and calms patients.
We’ve known for a long time that shaking hands is an excellent way to transmit diseases. Many of my patients, when they know they have a cold,  will state this up front and decline my handshake. This is something that most people intrinsically understand. Studies have shown that health care workers hands are a common cause of disease transmission in the hospital and this is why hand washing or gelling is mandated in the hospital between patient visits.
Sklansky, et al wrote an editorial in JAMA in 2014 advocating that the hand shake be banned from the health care setting because despite our best efforts at hand hygiene we often fail, either due to poor compliance or limited activity of alcohol based hand rubs against some pathogens (including C. dif).

They suggested some alternative greeting including the hand wave, the bow, placing the right palm over the heart or the namaste gesture from yoga.
Since then, a study has shown that the fist bump (mysteriously termed a dap greeting) does reduce bacterial transmission.
Researchers at Aberystwyth University in Wales (the home country of the skeptical cardiologist!) immersed a donor participants’ sterile-gloved hand into a dense culture of E-coli (a non-pathogenic strain), and after it was dry, exchanged greetings with recipient participants, who also wore sterile gloves. 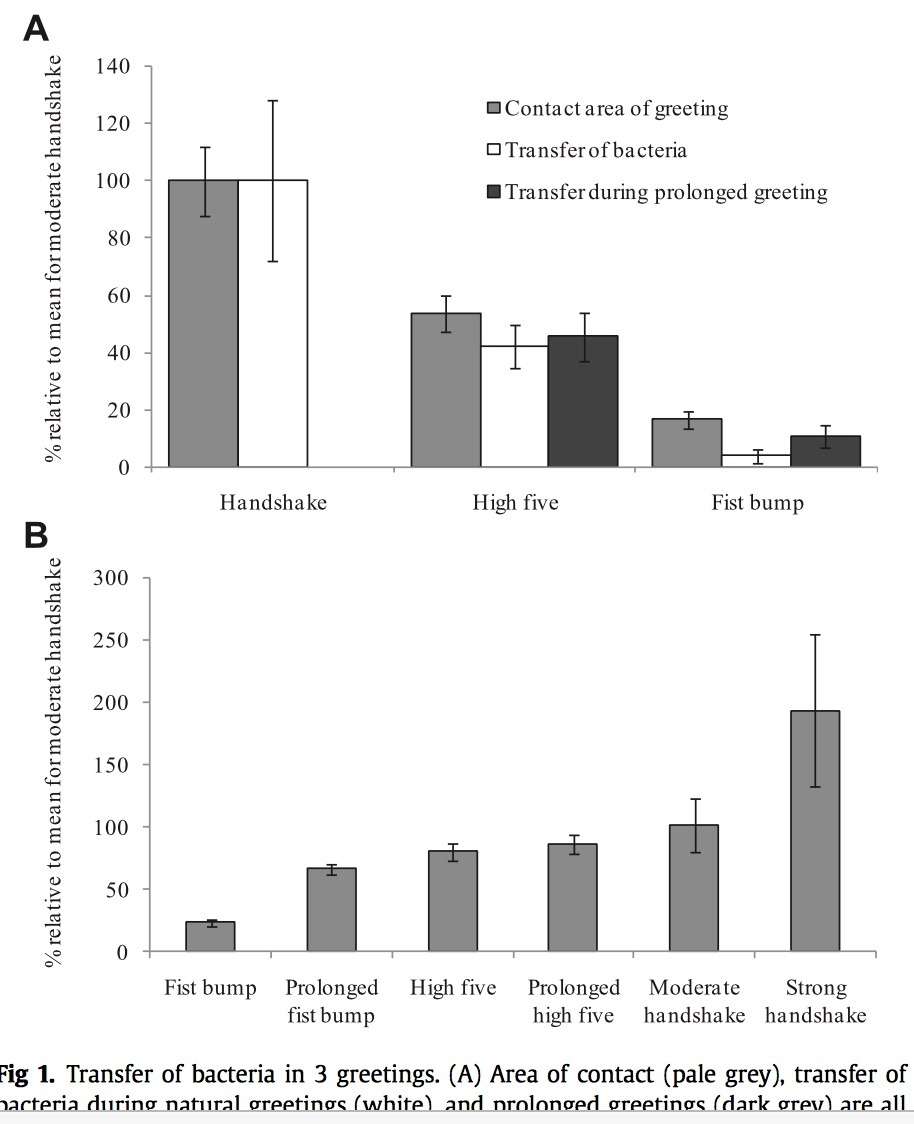 They tested the handshake, the high five, and the fist bump in a crossover design so that each “donor” and each “recipient” tested all greetings, eliminating potential for bias among the volunteers.
The results (graph to left) showed  twice as many bacteria were transferred during the handshake compared with the high-five, but the fist-bump transmitted only about 10% of the bacteria a handshake did.

Is It Time To Lose the Tie, the White Coat and the Handshake?

It’s hard to teach this old dog new tricks but more and more I will be eschewing the handshake in my patient encounters.

I’m going to experiment with the fist bump (especially for my younger patients) and the bow and perhaps I’ll have signs put up in my exam rooms declaring them “No Handshake Zones.”

I don’t think I can abandon the white coat yet. It’s like a security blanket for me. I will experiment more and more with not wearing it and monitor my patient’s reactions.

I will definitely try to wear the white coat for only one day and then send it off to be laundered (I wonder what the environmental consequences of that are?)

7 thoughts on “The Tie, The White Coat And The Fist Bump”