When I was a child in small town Oklahoma, I collapsed walking home from school one day after eating pecans. Apparently I had never encountered pecans in England where I grew up and I had a very severe, life-threatening  allergic reaction (anaphylaxis.)
My pediatrician was promptly called, drove over, picked me out of the street and (legend has it) with one hand on the steering wheel and the other jabbing me with epinephrine drove me to the local hospital (apparently ambulances were not invented at this time). There I spent several days in an oxygen tent recuperating.
Since then I had, until recently,  concluded (based on my own multiple food reactions and research) that I was allergic to “tree nuts.”
I would patiently explain to the uninitiated that I could eat almonds because they are in the peach family and I could eat peanuts because they are in the legume family: neither one of these, therefore, were true “tree nuts.”
To all whom I gave this seemingly erudite explanation I owe an apology for I have learned the earth-shattering truth that pecans are drupes! They are no more a nut than an almond is!
In fact, even walnuts are not nuts as hard as that is to believe.
Pecans, walnuts and almonds are all drupes.
Why, you may wonder, is any of this botanical folderol of any relevance to cardiology?

For those paying attention to media reports on the latest food that will either kill you or make you live for ever you may already know the answer. This paper published in JAMA made big headlines.
Jane Brody of the New York Times wrote a piece extolling the virtues of nuts entitled “Nuts are a Nutritional Powerhouse”. Medical New Today wrote “Eating Nuts Linked to 20% Cut in Death Rates”.
It turns out, however, that most of what the 136,000 Chinese were eating and half of  the “nuts” the 85,000 low income Americans were eating in that JAMA study  were legumes: peanuts or peanut butter. The authors wrote:

“Our findings … raise the possibility that a diet including peanuts may offer some CVD (cardiovascular)  protection. We cannot, however, make etiologic inferences from these observational data, especially with the lack of a clear dose-response trend in many of the analyses. Nevertheless, the findings highlight a substantive public health impact of nut/peanut consumption in lowering CVD mortality, given the affordability of peanuts to individuals from all [socioeconomic status] backgrounds.”

These findings follow another large observational study published in 2013 which also found (in American doctors and nurses) an inverse relationship between nut consumption and mortality.

“compared with participants who did not eat nuts, those who consumed nuts seven or more times per week had a 20% lower death rate. Inverse associations were observed for most major causes of death, including heart disease, cancer, and respiratory diseases. Results were similar for peanuts and tree nuts, and the inverse association persisted across all subgroups.”
We also have a very good randomized trial (the PREDIMED study) that showed that  the Mediterranean diet plus supplementation with extra-virgin olive oil or mixed nuts performed much better than a control diet in reducing cardiovascular events.
Participants in the two Mediterranean-diet groups received either extra-virgin olive oil (approximately 1 liter per week) or 30 g of mixed nuts per day (15 g of walnuts, 7.5 g of hazelnuts, and 7.5 g of almonds) at no cost, and those in the control group received small nonfood gifts (I wonder what these were?)
After 5 years, those on the Med diet had about a 30% lower rate of heart attack, stroke or cardiovascular death.

Nuts versus Drupes versus Legumes

The evidence supporting “nut” consumption as a major part of a heart healthy diet is pretty overwhelming. But what is a nut and which nuts or nut-like foods qualify?
Let’s lay out the basic definitions:
Nut-Generally has a hard outer shell that stays tightly shut until cracked open revealing a single fruit inside. Examples are hazelnuts and acorns.
Drupe-Has a soft, fleshy exterior surrounding a hard nut. Classic drupes are peaches and plums with interior nuts so hard we won’t eat them. Examples are pecans, almonds, walnuts and coconuts.
Legume-generally has a pod with multiple fruit which splits open when ready. Examples are peas, carob, peanuts, soybeans and beans.

What Nuts Were Consumed in Studies Showing Benefits of Nuts?

Initially participants were given a questionnaire and asked
” how often they had consumed a serving of nuts (serving size, 28 g [1 oz]) during the preceding year: never or almost never, one to three times a month, once a week, two to four times a week, five or six times a week, once a day, two or three times a day, four to six times a day, or more than six times a day.”
After initial surveys, the questionnaires split out peanut consumption from “tree nut” consumption and whether you ate peanuts or nuts the benefits were similar.
Thus, for the most part, participants were left to their own devices to define what a nut is.  Since most people don’t know what a true nut is, they could have been eating anything from almonds (drupe related to peaches) to hazelnuts (true nut) to a pistachio “nut” (drupe) to a pine “nut” (nutlike gymnosperm seed).

The nutrient components of these nuts varies widely but one consistency is a very high fat content. For this reason, in the dark days when fat was considered harmful, nuts were shunned.
However, in our more enlightened era we now know that fat does not cause heart disease or make you fat.
Please repeat after me “Fat does not cause heart disease or make you fat.”
A one ounce portion of pecans contains 20.4 grams of fat (11.6 arms monounsaturated and 6.1 polyunsaturated) so that 90% of its 204 calories come from fat.
Nuts, of course, also contain numerous other biologically active compounds that all interact and participate in the overall  beneficial effects that they have on cardiovascular disease and mortality.
They are a whole, real food which can be eaten intact without processing and these are the foods we now recognize provide the best choices in our diets, irrespective of fat or carbohydrate content.
They are also convenient, as they are easy to store and carry with you, providing a perfect snack. 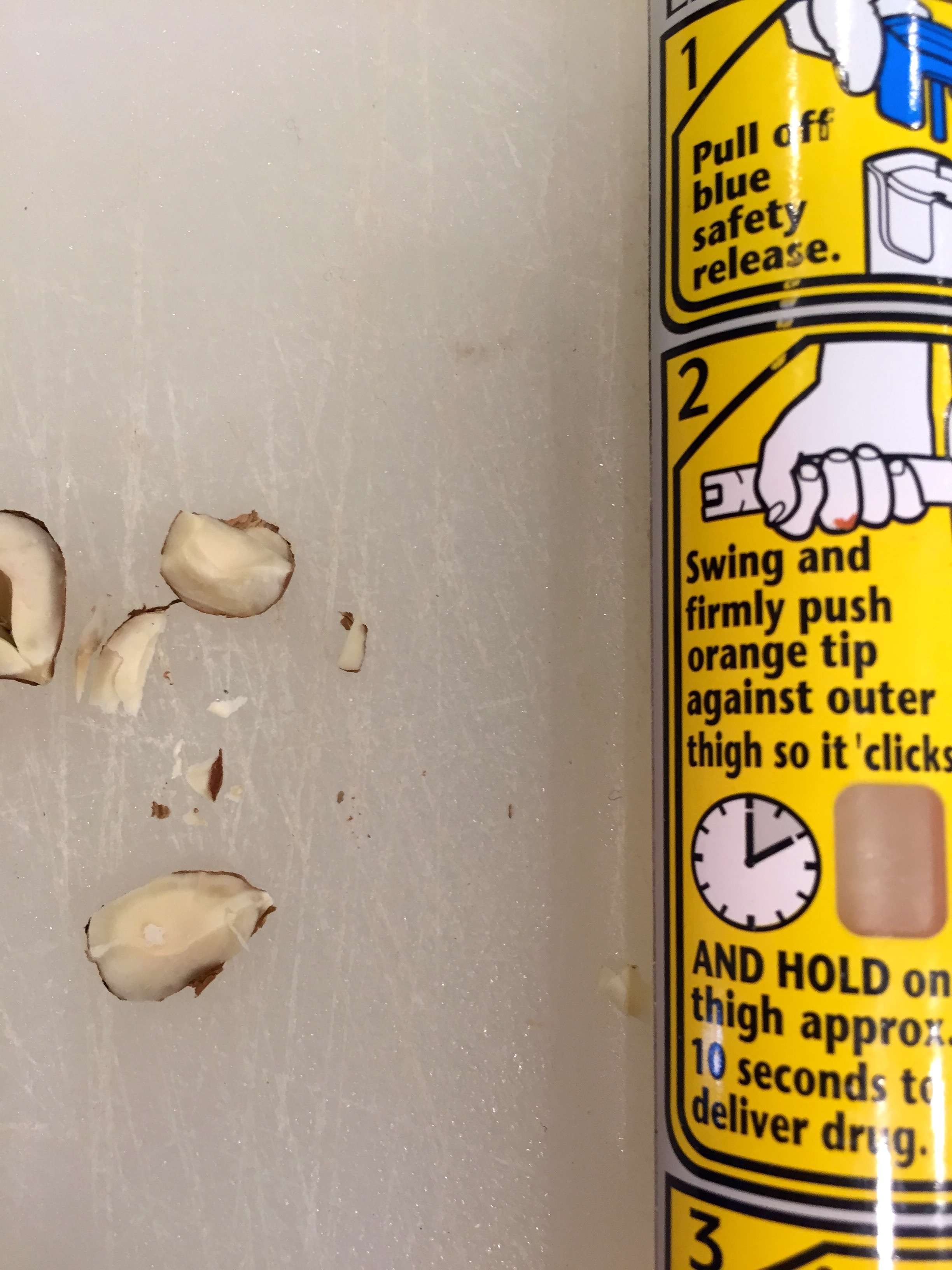 Hazelnut Death Experiment (Don’t try this at home!) A single hazelnut was partitioned into halves, quarters, slivers and little tiny bits. Progressively larger portions were consumed at 5 minute intervals. An Epipen (right) was available in case of anaphylaxis.
It turns out, that my attempts to put pecans and walnuts in to a specific family of nuts that increased my risk of dying if I consumed them were misguided.
I’m allergic to drupes.
In fact, I did an experiment recently and consumed a true nut (a hazelnut) and found I had no reaction.
I’m not allergic to nuts!!!

In the world of allergic reactions, thus,  there is no particular value to partitioning nuts from drupes from legumes.
Similarly, for heart healthy diets, it doesn’t matter if you are consuming a true nut or a drupe as long as you think of it as a nut.
Consume them without concern about the fat content and consume them daily and as along you are not allergic to them they will prolong your life.