Low T and Me: Does Testosterone Therapy Increase Cardiovascular Risk?

In the last year, several of my patients have asked me whether it is safe for them to take testosterone for “low T.” They were responding to media reports suggesting that testosterone therapy raised heart attack risk by one-third.
I must admit, I had been skeptical of the legitimacy of the “low T” diagnosis.  Many of the symptoms attributed to testosterone (T) deficiency, it seemed, were just part of normal male aging: decreased libido, fatigue, weight gain, and loss of muscle mass.
Perhaps, I thought, men should just be more willing to exercise regularly and lose weight and accept the indignities of aging that result despite our best efforts.
On the other hand, in the back of mind was the idea that perhaps I, as a sixty-something male with declining strength and endurance, could somehow forestall the ravages of aging by taking T.
I googled “low T” and immediately found some sponsored sites, including “is it low T.com,” which appears to be an educational site for patients. However, the one treatment option that they provide links to is made by Abbvie, the somewhat hidden host of the site. Abbvie is a pharmaceutical company that makes Androgel, the most widely prescribed testosterone cream. 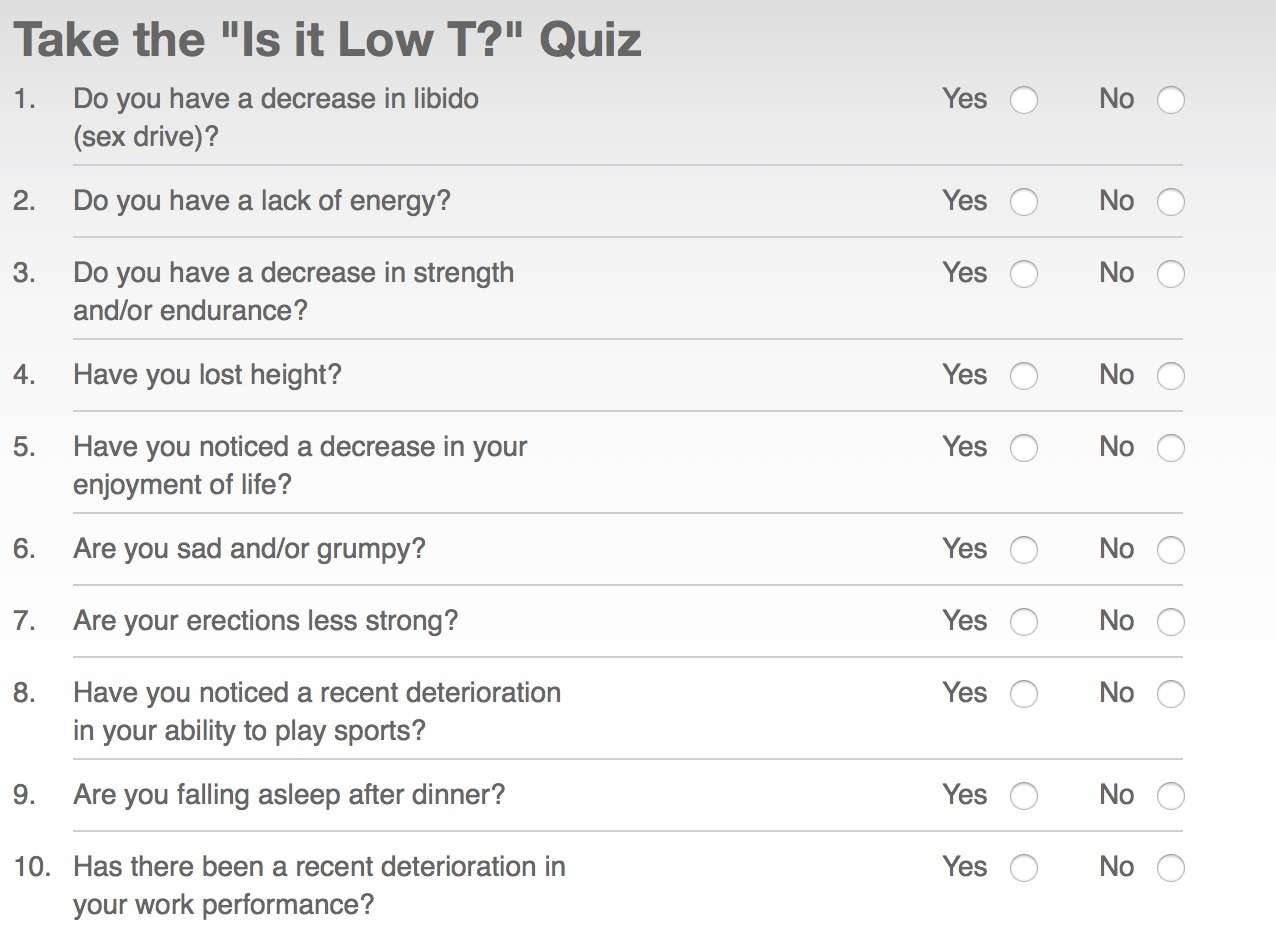 I answered yes to the 3 questions I thought were just uniform consequences of aging:
1. Reduction in strength and/or endurance.
2. Loss of height.
3. Deterioration in your ability to play sports.
After taking the quiz, I was told that answering yes to 3 of the 10 questions strongly suggests you have low T.
In addition, according to the site, if you answered yes to question 1 (decreased libido) or 7 (less strong erections) you have low T.
Based on this quiz, I and 99% of men my age must have low T!!
In the last 10 years, the use of testosterone therapy has quadrupled, driven by better formulations for testosterone delivery and by direct-to-consumer marketing campaigns that suggest that treating low T will reverse these normal consequences of aging.
As a result, in 2013, 2.3 million American men received testosterone therapy and 25% of these men had no baseline testosterone levels tested.
A year ago, the New York Times editorial board opined on the dangers of overprescribing testosterone and the influence of pharmaceutical companies in over-promoting the drug, in a piece entitled “Overprescribing testosterone, dangerously.”  Articles like this are what have raised patients’ concerns about T therapy and increased risk of heart attack.

There is a large body of evidence that shows an association between lower T levels and increased mortality and coronary artery disease. Lower T levels are also associated with higher risk of diabetes and the metabolic syndrome.  Studies also show that T therapy in T-deficient men increase lean mass and reduce fat mass and are associated with a reduction in mortality. A recent review article by Morgenthaler, et al in Mayo Clinic Proceedings, provides a detailed and meticulous summary of these studies and data.
Two recent studies contradict this large body of evidence and gained enormous media attention. The first, by Vigen et al in JAMA 2013, was a retrospective analysis of VA patients which has received extensive criticism for its statistical technique and has been corrected twice. The second study was by Finical, et al in PLoS One 2014, suggesting increased mortality in patients for 90 days after receiving their prescription for T. This study also contains methodologic issues and is hardly conclusive.

Is it Safe to Take T for low T

My recommendation to patients who want to take T after looking at all the data is as follows:
-Make sure that you really have low T.  Your total T levels should be less than 300 ng/dL done in a reliable, certified lab.
-At this time, I don’t see solid evidence that taking T, if you definitely have T deficiency, increases the risk of cardiovascular complications or death.
As with all medications, the shortest duration and smallest effective amount is what you should take. All medications have side effects, some that we know and some that we don’t know. Most of the studies that have been published were on small numbers of patients for short periods of time.
-If you are overweight and/or sedentary, there is good evidence that losing weight and exercising will improve many of the symptoms ascribed to low T.  These will also improve your life expectancy and lower your risk of heart attack.
…And you won’t have to worry about any side effects!
Do I have low T? Like all sixty-somethings my T levels are lower than when I was 30. My endurance is less. I’m losing height. Fat wants to build up in my abdomen, despite my best efforts.
It’s only going to get worse, but I’m willing to accept these as normal consequences of the aging process, rather than introduce external T into my system with its unknown consequences.
I will not go gentle into that good night but will continue to rage against the dying of the light without the wonders of pharmaceutical grade T.
Yours in aging,
-ACP

1 thought on “Low T and Me: Does Testosterone Therapy Increase Cardiovascular Risk?”