Jamón Ibérico and The Mediterranean Diet

The skeptical cardiologist recently spent a week in the Basque region of Spain intensively researching dietary and lifestyle choices of this unique area.

For a good summary of the Mediterranean “diet pyramid” check out this 1995 article.

The definition of the MDiet varies, often based on what bias the definer has for particular foods or macronutrients, but initially was considered to be the food patterns typical of Crete, much of the rest of Greece and southern Italy in the early 1960s. The reason for choosing this time era and geography was based on:

The diet is closely tied to traditional areas of olive cultivation in the Mediterranean region.
The MD of the early 1960s had the following characteristics:

I stayed in a small beach town, Deba, in Spain which is half way between Bilbao (famous for its Guggenheim museum) and San Sebastian. There were very few non-Spanish tourists in Deba so  presumably the dietary and lifestyle choices I observed are representative of current Basque choices although likely different from the early 1960s.

I found the Basque people in Deba to be welcoming and joyful and European statistics show the Basque to be among the most satisfied with their overall life and job conditions.

Walking around the squares of Deba I observed two activities which I would ordinarily have presumed would result in a low life expectancy: lots of cigarette smoking and lots of Jamón consumption. 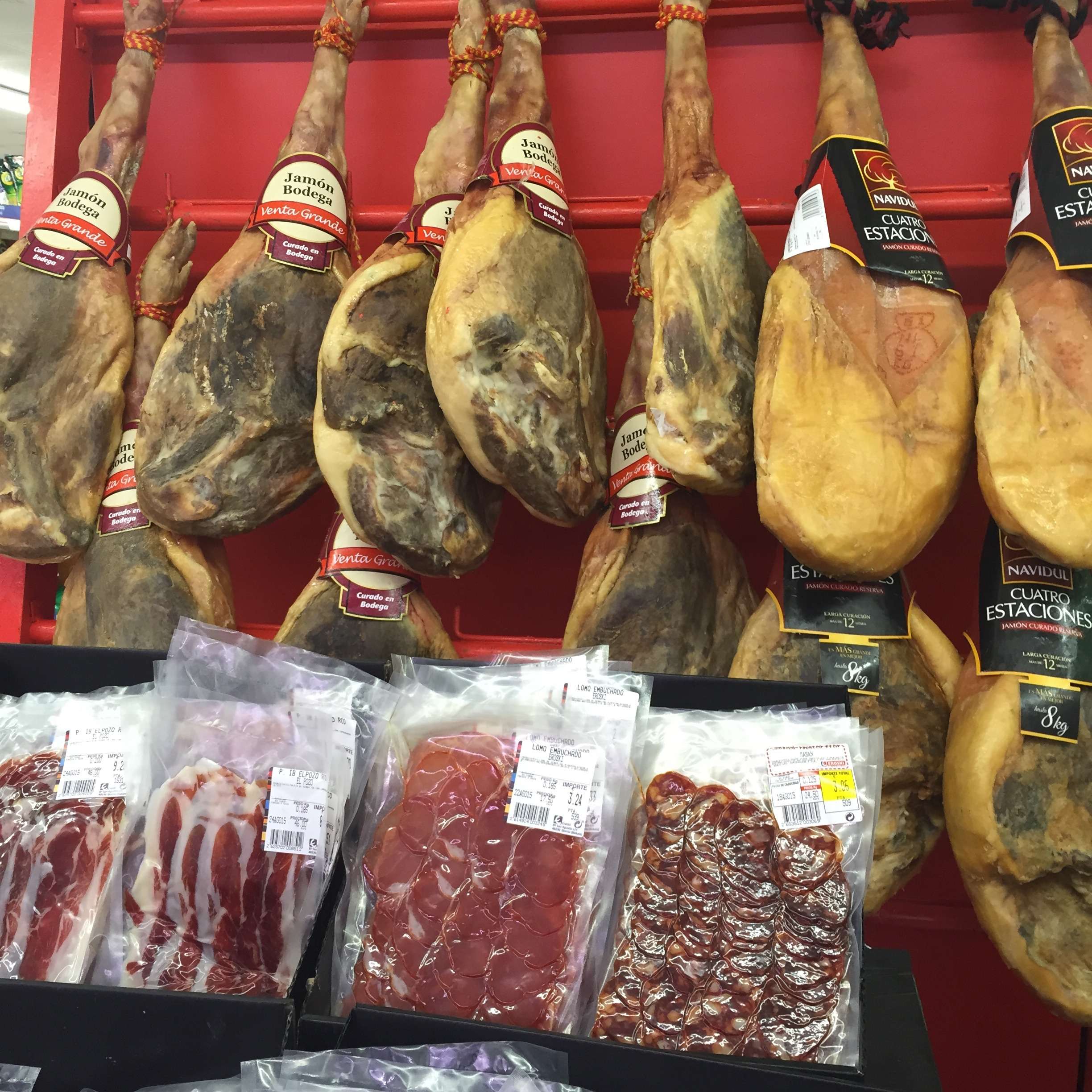 Ham was everywhere in Deba, from the supermarkets to the cafes. A typical appetizer choice was a plate full of Jamón Ibérico. Most of the pintxos (Basque-style tapas) we saw consisted of Jamon on bread.

From  jamon.com (dedicated to the fine art of ham): 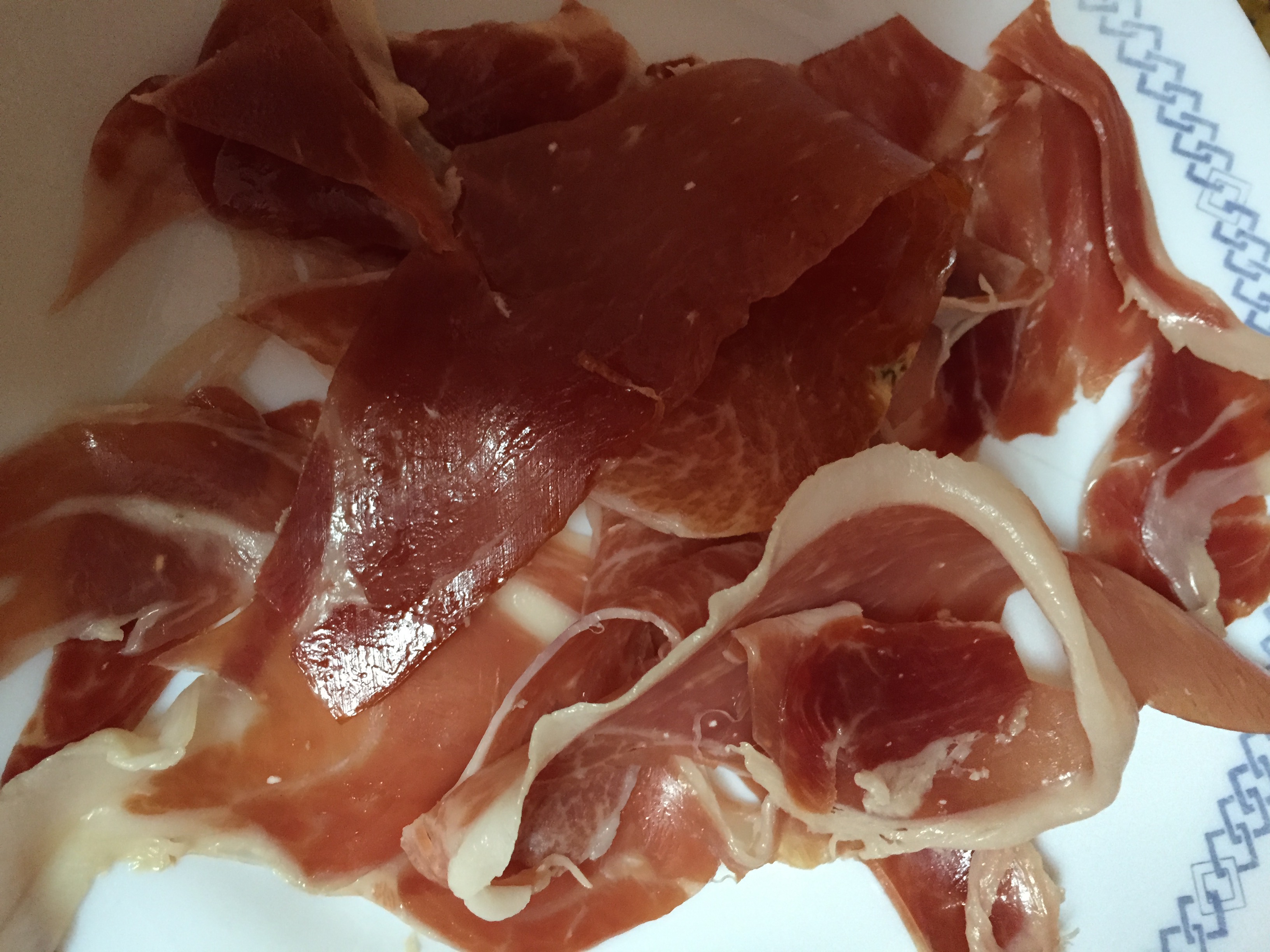 “Picture paper-thin strips of dark red ham like petals ringing a hand painted plate. Imagine big honest hams curing in the mountain air. Picture individual hams resting on stands in family kitchens throughout Spain with a long slim knife at hand for any and all to slice a treat.
In Spain, Jamón is hospitality. Jamón is Spain. Of all the European hams, jamón from Spain is the Gold Standard.”

Jamón, dry-cured ham, has been eaten in Spain and other Mediterranean countries since ancient times. There are basically two kinds: hams from rustic and free-range  pigs (Iberia, Corsican or Cinta Senese) and hams from intensively-reared white pigs (Serrano, Parma, Bayonne).

Both hams involve a moderate salting and a ripening period of 7-14 months for white pigs and over 20 months for Iberian hams.

When they are finished curing, they have an incredibly complex taste,  distinct marbling, a deep red color and an intense ham flavor.

The most sought after ham is Jamón Ibérico de Bellota: a subcategory of Jamón Ibérico where the pigs are free to roam the meadows of the ‘dehesa’. During the autumn prior to their sacrifice, they are encouraged to gorge on acorns (bellotas) from the holm oak and cork trees, sometimes gaining as much as a kilo of weight a day.”

If we follow most current nutritional guidelines we would be advised to avoid Jamon because it is considered a processed meat and it contains lots of salt and saturated fat.
Despite eating lots of Jamon,  however, the Spanish and Basque do very well in terms of longevity and rates of heart disease.

The Basque good health could be related to any number of factors. They consume lots of fresh fish caught in nearby ports and prepared with lots of garlic and olive oil. (I had the best monkfish of my life in a cider house in the hills near Deba). Fish and olive oil are clearly beneficial dietary components.
They also drink alcohol in varied forms, including locally sourced apple cider, beer and fine local wines from Rioja.

They are active and they have long stretches of beautiful coastline to hike (including this geopark), some of the best surfing beaches in the world, and hills for cycling.
Ultimately, a healthy lifestyle consists of enjoyable and sustainable exercise and an enjoyable, sustainable  and palatable diet composed of  a combination of foods (mostly plants) , interacting in myriad unmeasurable ways.

Focusing on specific fat (other than industrially produced trans fats) or sodium content is not a particularly useful approach.

I think Jamon can be considered part of a healthy Mediterranean diet when consumed in moderation and when combined with an active physical lifestyle. It makes a wonderful addition to anyone’s diet.

15 thoughts on “Jamón Ibérico and The Mediterranean Diet”