Avid readers of the skeptical cardiologist know that he is not an advocate of fish oil supplements.

One of my first posts (1/2013) was devoted to taking down the mammoth OTC fish oil industry because recent scientific evidence was clearly showing no benefit for fish oil pills.

Despite a lack of evidence supporting taking them, the fish oil business continues to grow buttressed by multiple internet sites promoting various types of fish oil (and more recently krill oil)  for any and all ailments and a belief in the power of “omega-3 fatty acids”. 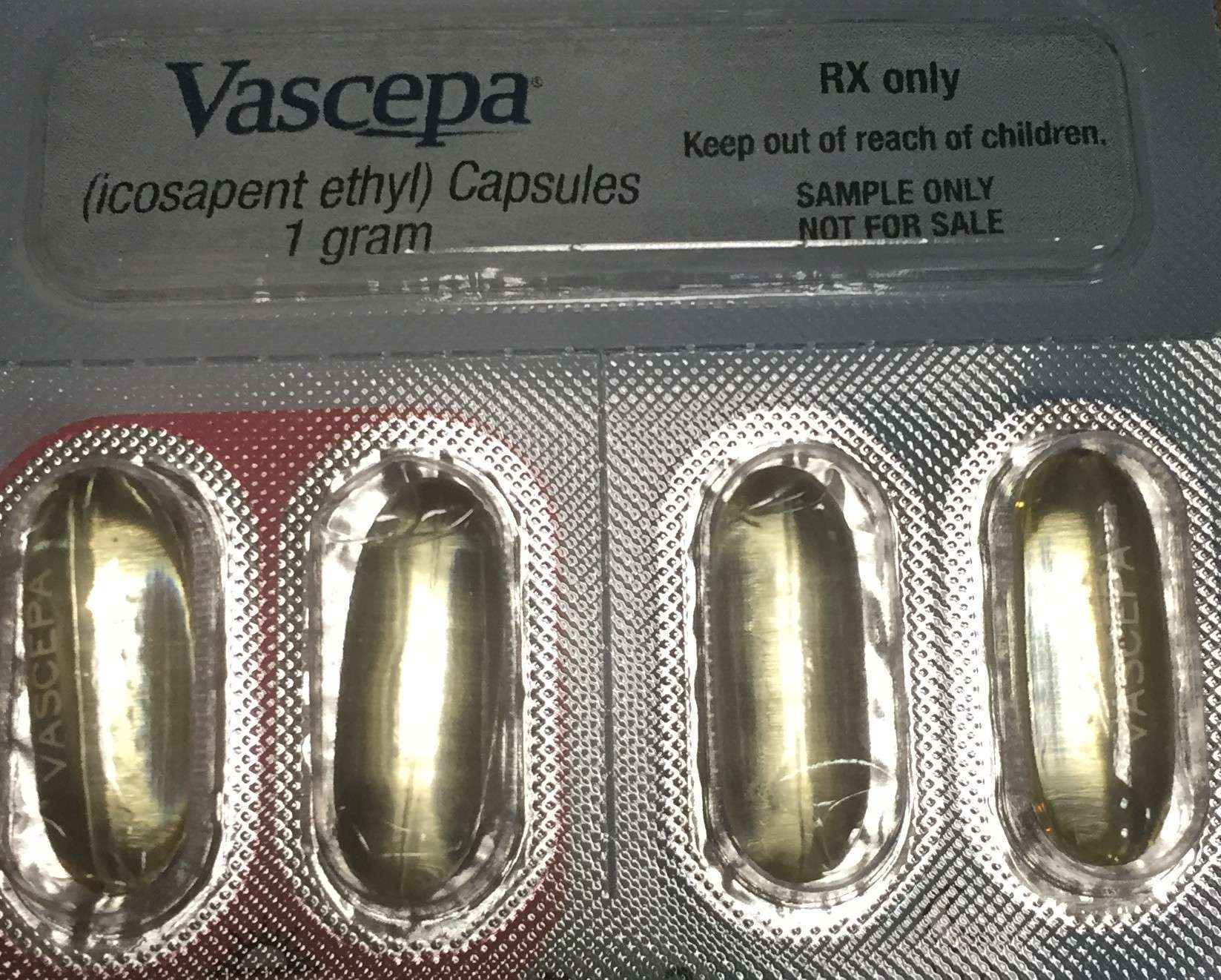 A fish oil preparation, VASCEPA,  available only by prescription, was approved by the FDA in 2013.

Like the first prescription fish oil available in the US, Lovaza, VASCEPA is only approved by the FDA for treatment of very high triglycerides (>500 mg/dl).

This is a very small market compared to the millions of individuals taking fish oil thinking that  it is preventing heart disease.

The company that makes Vascepa (Amrin;$AMRN)would also like to have physicians prescribe it to their patients who have mildly or moderatelyelevated triglycerides between 200 and 500 which some estimate as up to 1/3 of the population.

The company has a study that shows that Vascepa lowers triglycerides in patients with such mildly to moderately elevated triglycerides but the FDA did not approve it for that indication.

Given the huge numbers of patients with trigs slightly above normal, before approving an expensive new drug, the FDA thought, it would be nice to know that the drug is actually helping prevent heart attacks and strokes or prolonging life.

After all, we don’t really care about high triglycerides unless they are causing problems and we don’t care about lowering them unless we can show we are reducing the frequency of those problems.

Data do not exist to say that lowering triglycerides in the mild to moderate range  by any drug lowers heart attack risk.

In the past if a company promoted their drug for off-label usage they could be fined by the FDA but Amrin went to court and obtained the right to promote Vascepa to physicians for triglycerides between 200 and 500.

Consequently, you may find your doctor prescribing this drug to you. If you do, I suggest you ask him if he recently had a free lunch or dinner provided by Amrin, has stock in the company (Vascepa is the sole drug made by Amrin and its stock price fluctuates wildly depending on sales and news about Vascepa) or gives talks for Amrin.

If he answers no to all of the above then, hopefully, your triglycerides are over 500.

-Vascepa does not contain fish oil in a natural form.

Although there marking material states “VASCEPA is obtained naturally from wild deep-water Pacific Ocean fish” the active ingredient is an ethyl ester form of eicosapentoic acid (EPA) which has been industrially processed and distilled and separated out from the other main omega-3 fatty acid in fish oil (DHA or docosohexanoieic acid).

-Vascepa Does Eat Through Styrofoam.

I came across reports of this phenomenon while researching Vascepa: it is commonly cited by fish oil marketers who are using the natural form of fish oil.

I tested this for myself and watched as my little styrofoam cup bottom was eaten away.

I’m not sure what the significance of this is as many concentrated organic oils (like lemon oil apparently) will do the same thing but it does seem to be a marker for the chemically processed, synthetic ethyl esters of EPA or EPA plus DHA.

Fish oil in its natural form which is within the actual fish surrounded by a host of nutrients, vitamins, mineral, antioxidants  and chemicals we don’t fully understand is the best fish oil to consume.

I’m willing to bet that if I put a raw piece of salmon in that cup it would not eat through it (I feel another experiment coming up!).

8 thoughts on “Should You Take Prescription (“Pharmaceutical Grade”) Fish Oil?”