Is Green Tea Better For Your Heart Than Black Tea?

Coffee is the  caffeinated beverage most consumed by Americans and the skeptical cardiologist. It is good for the heart (unless adulterated by titanium dioxide or lots of sugar, a horror that Starbucks likes to promote). 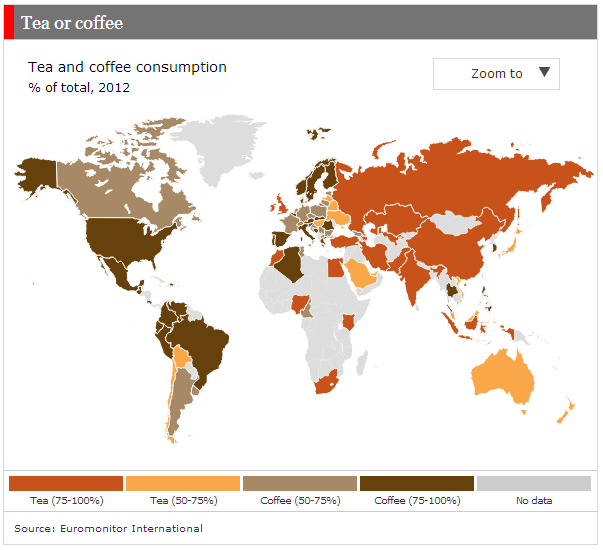 Worldwide, however, as this cool graphic demonstrates (interactive at the Economist)  tea dominates over coffee in lots of places.
Tea in general and particularly green tea is perceived by many to be incredibly healthy: fighting cancer, dementia, obesity and heart disease. But is this perception justified?

If you Google search the health benefits of green tea you might conclude that it is a panacea for all that ails modern civilization. However, bad nutritional advice is the norm on the internet and even  websites like Web MD, which you might consider to be reliable, spread inaccurate, misleading and poorly researched information regularly.
WebMD has an article on green tea that starts off

“Green tea is so good for you that it’s even got some researchers raving.“It’s the healthiest thing I can think of to drink,” says Christopher Ochner, PhD. He’s a research scientist in nutrition at the Icahn School of Medicine at Mount Sinai Hospital.”

Who is Chris Ochner and why is he “raving” about the health benefits of green tea you might ask? That’s certainly what I wanted to know, particularly since this same quote or variations on it are all over the internet on sites like “Herbal Republic” which ups the green tea ante with the title “”Green Tea is Beyond a Superfood”-Dr. Christopher Ochner”  (by the way, any source of nutritional information that uses the term superfood should be considered bogus.) 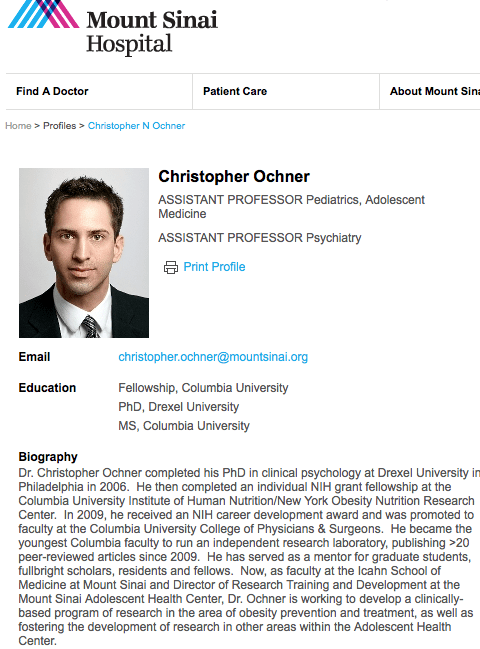 Although no source is provided for this quote from Dr. Ochner, there is a Christopher Ochner, Ph.D listed on the Icahn Medical School Staff. His Ph. D. is in psychology and he works in the areas of adolescent obesity (perhaps he pushes green tea on his obese adolescents).  I can find no publications by him on the topic of green tea and no evidence that he made these comments. I have sent him an email asking for clarification and edification.
The website,  juicing for health.com lists “5 scientifically proven reasons to drink green tea” (by the way, I consider articles with headlines that start with a number, i.e.  “3 health foods that are actually killing you from the inside”,  “5 veggies that kill stomach fat”, and “35 celebs who’ve aged horribly” are worthless and should be ignored and avoided at all costs)

It’s hard to find good studies on green tea that aren’t somehow funded by the tea, nutraceutical or food industry.  For example, one “S Wolfram” has written extensively on the benefits of green tea in marginal scientific journals. He works for DSM Nutritional Products, LTd., a Swiss food conglomerate.(“DSM Nutritional Products is the world’s largest nutritional ingredient supplier to producers of foods, beverages, dietary supplements, feed and personal care products” says one DSM PR release”).
DSM developed a highly concentrated extract of  a catechin called Epigallocatechin Gallate (EGCG) in green tea that had been identified as having potential health benefits for humans.
In one recent “review” Wolfram wrote  in somewhat vague but highly optimistic terms

I’m not sure what “model systems” he is referring to but it is certainly not humans. He may be talking about rodents, because in 2005  Wolfram published  a paper entitled:

“Thus, dietary supplementation with EGCG should be considered as a valuable natural treatment option for obesity.”

Voila! From a few experiments in rodents and a few short-term, small studies in humans performed by heavily biased scientists, DSM’s version of EGCG emerged as a leading nutraceutical (I prefer the term, snakeoil) and now you can buy this online from a host of bogus supplement/nutraceutical sites as Teavigo.

and therefore appeals to Americans who are seeking “natural” ways to prevent or treat the common  chronic  diseases of Western civilization.
Because there is no good scientific evidence supporting a role for green tea extracts or ECGC in preventing any specific disease, there is no FDA scrutiny of

the drug for efficacy and safety. This is fine for nutraceutical manufacturers as they have been granted the ability to  sell their useless products without any regulatory or FDA approval.
Companies like DSM avoid making any specific health claims for their supplements (such as this drug reduces your chances of having a heart attack or stroke) because the FDA can then go after them.
Instead, the Teavigo website makes vague but optimistic statements such as

“Green tea has long been used for health benefits and Teavigo® is the purest and most natural form of the most active substance in green tea – Epigallocatechin Gallate (EGCG). EGCG contains potent natural antioxidants and efficient free-radical scavengers (free radicals being the highly reactive compounds that cause cellular damage).

Notice the key marketing buzzwords in this statement
-Purest
-Natural
-Active
-Antioxidants
-Efficient
-Free-Radical Scavengers
-Cellular Damage
Who wouldn’t want to take a pill that is pure and natural and full of those wonderful antioxidants that stop those nasty free-radicals  from causing cellular damage?
Unfortunately, any time a proposed powerful “anti-oxidant” ( b-carotene, vitamin E, vitamin C, selenium, retinol, zinc, riboflavin, and molybdenum ) has been studied in a well done scientific trial for prevention of cancer or cardiovascular disease it has failed.
We don’ know if this is because the wrong anti-oxidants have  been chosen (for example in green tea  there are hundreds of potential beneficial chemicals)  or because extracting a single chemical from its milieu in a complex food/beverage makes it inactive or if the whole idea of stopping free-radical damage is misguided.
Why take the time to actually brew and drink green tea the website points out after all:

“To get the optimal benefits from ordinary green tea would take an intake of four to eight cups of green tea a day. With Teavigo® you get the same pure, natural and healthy effects, with more convenience and without the caffeine.”

Finally, consumers of Teavigo can be reassured because it is produced using
“A patented and unique production process with constant product quality”
Let me see here, Teavigo is natural but it is made by a “production process” with “constant product quality”.  Isn’t natural production process an oxymoron?
I have asked the Teavigo people to tell me their “production process” but so far I’ve gotten no response. Your guess is as good as mine as to what chemicals or other potentially damaging processes tea undergoes to reach the colorless and tasteless powder that is Teavigo.
Green Tea Reality
The evidence supporting tea and green tea health benefits  is weak, coming from observational studies.  A recent review of all these observational studies (supported in part by the tea industry) concluded that

Although the evidence appears to be stronger for green tea than for black tea, which differ greatly in their flavonoid profiles, it is difficult to compare this evidence because the populations and their baseline risks of cardiovascular disease differ greatly between the individual studies on these 2 types of tea, and few studies of green tea provide evidence in non-Asian populations.
Whereas there is reasonable observational evidence that high tea consumption is associated with lower cardiovascular risk, the evidence for green tea being healthier is mostly marketing hype.

If you like green tea by all means drink it in whatever quantity you desire. It’s not bad for you. Weak observational data suggests it may reduce your stroke risk, especially if you are Asian.
On the other hand, if you like black tea or oolong tea you can feel very comfortable that it is not bad for you.  It might also reduce your risk of stroke.
There is nothing to suggest tea is healthier than coffee.
Don’t add sugar or titanium dioxide to your tea but feel free to add cream or full fat milk.
Don’t worry about caffeine unless it makes you jittery or brings on palpitations. Common sense should tell you what amount you can tolerate.
Please don’t buy or consume green tea extracts or Teavigo or any other nutraceutical.
The makers of these products are cynically preying on consumer desire for “natural” treatments, selling chemicals which have not been proven either safe or effective, and employing  misleading marketing and promotional material that implies “scientific” support that is either nonexistent or comes from very weak studies, often run by researchers employed by the industry.
I guarantea this post was unbiased
-ACP

0 thoughts on “Is Green Tea Better For Your Heart Than Black Tea?”