Why Is The American College of Cardiology Distorting The 2015 Dietary Guidelines for Americans?

The 2015-2020 Dietary Guidelines for Americans (DGA) have finally been released and I’m sure that most of you could care less what they say. You may think that they can’t be trusted because you believe the original science-based recommendations have been altered by political, food and agribusiness forces.  Perhaps you don’t trust science to guide us in food choices. Perhaps, like the skeptical cardiologist, you realize that the DGA has created, in the past, more problems than they have corrected.
This time, the skeptical cardiologist believes they have made a few strides forward, but suffer from an ongoing need to continue to vilify all saturated fats.
As such, the DGA no longer lists a recommended limit on daily cholesterol consumption (step forward) but persists in a recommendation to switch from full fat to non fat or low fat dairy products, which is totally unsubstantiated by science, (see my multiple posts on this topic here).
By now you should have gotten the message that a healthy diet consists of lots of fruits, vegetables, nuts, legumes, fish, olive oil and whole grains. The DGA emphasizes this.
There is general consensus that processed foods and added sugar should be limited.
Most of the controversy is about what to limit and how much to limit foods that are considered unhealthy.
Red meat and processed meat remain in the crosshairs of the DGA (although not stated explicitly), but eggs and cholesterol have gotten a pass, something which represents a significant change for the DGA and which I have strongly advocated (here and here).
But hold on, my professional organization, the American College of Cardiology says otherwise.

Misleading Information From the American College of Cardiology

The American College of Cardiology sent me an email and posted on their website the following horribly misleading title:

The first paragraph of the ACC post reads as follows:
“Physiological and structural functions of the body do not require additional intake of dietary cholesterol according to the 2015 Dietary Guidelines released on Jan. 7 by the U.S. Departments of Health and Human Services (HHS) and of Agriculture (USDA). As such, people should practice healthy eating patterns consuming as little dietary cholesterol as possible. – ”
While technically these statements can be found in the document (by digging way down) the executive summary (infographic below) says nothing about limiting cholesterol. 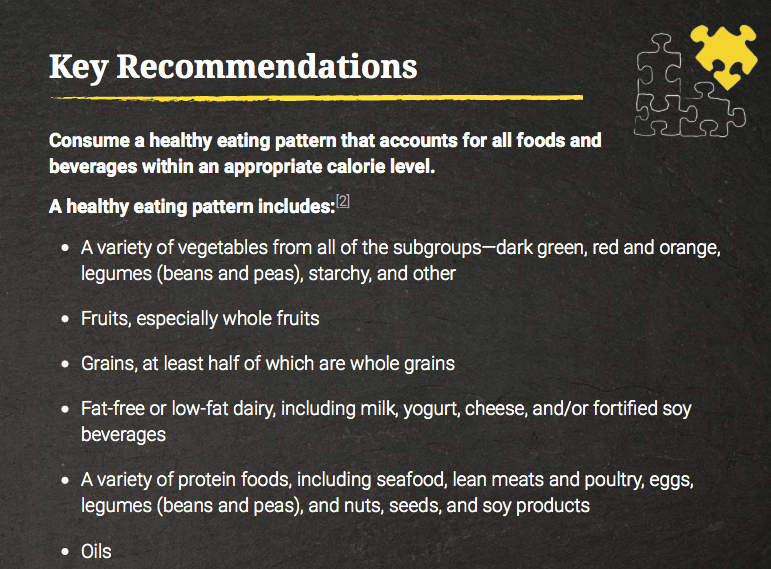 The “Key Recommendations” list eggs as included under a “healthy eating pattern” along with other protein foods. 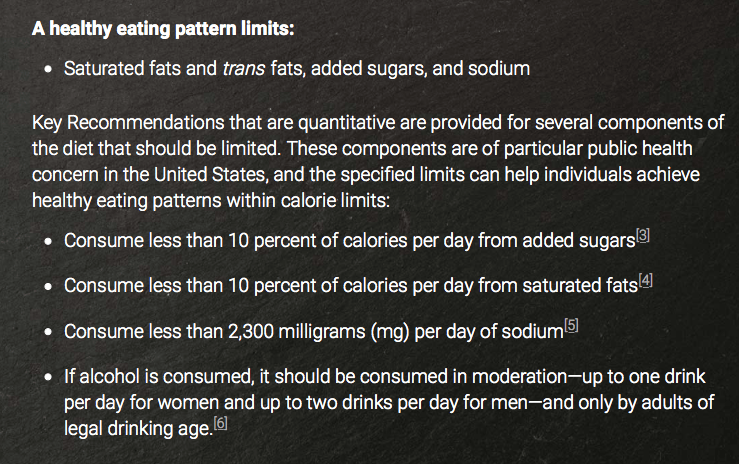 In addition, there is no mention of cholesterol under what a healthy pattern limits.


In the same section on cholesterol that the ACC inexplicably has chosen to emphasize, is this sentence:

So the DGA recommends no specific limit on dietary cholesterol.
This is consistent with what the DG advisory committee recommended when they wrote “dietary cholesterol is no longer a nutrient of concern.”
The DGA goes on to state:

“A few foods, notably egg yolks and some shellfish, are higher in dietary cholesterol but not saturated fats. Eggs and shellfish can be consumed along with a variety of other choices within and across the subgroup recommendations of the protein foods group.”

I have a theory on why the ACC went so wildly astray in reporting this information: they are led by a vegan.

The current president of the ACC, Kim Williams, is an evangelical vegan, unrepentant, as this NY times article points out. Apparently, he tries to convert all his patients to the “plant-based diet.”

He is quoted extensively in the ACC blurb on the DGA and is clearly attempting to put a bizarre vegan spin on the new guidelines, ignoring the evidence and the progressive shift from the 2010 guidelines.

Can any information from the ACC be trusted if such basic and important science reporting was so heavily distorted by its President?

No wonder Americans tune out dietary advice: it can so easily be manipulated by those with an agenda.

-May the forks and knives be with you

0 thoughts on “Why Is The American College of Cardiology Distorting The 2015 Dietary Guidelines for Americans?”