In the name of research and inspired by reading a biography of Robert Atkins, a few days ago the skeptical cardiologist embarked on an ultra low carb diet designed to put him in a state of ketosis. 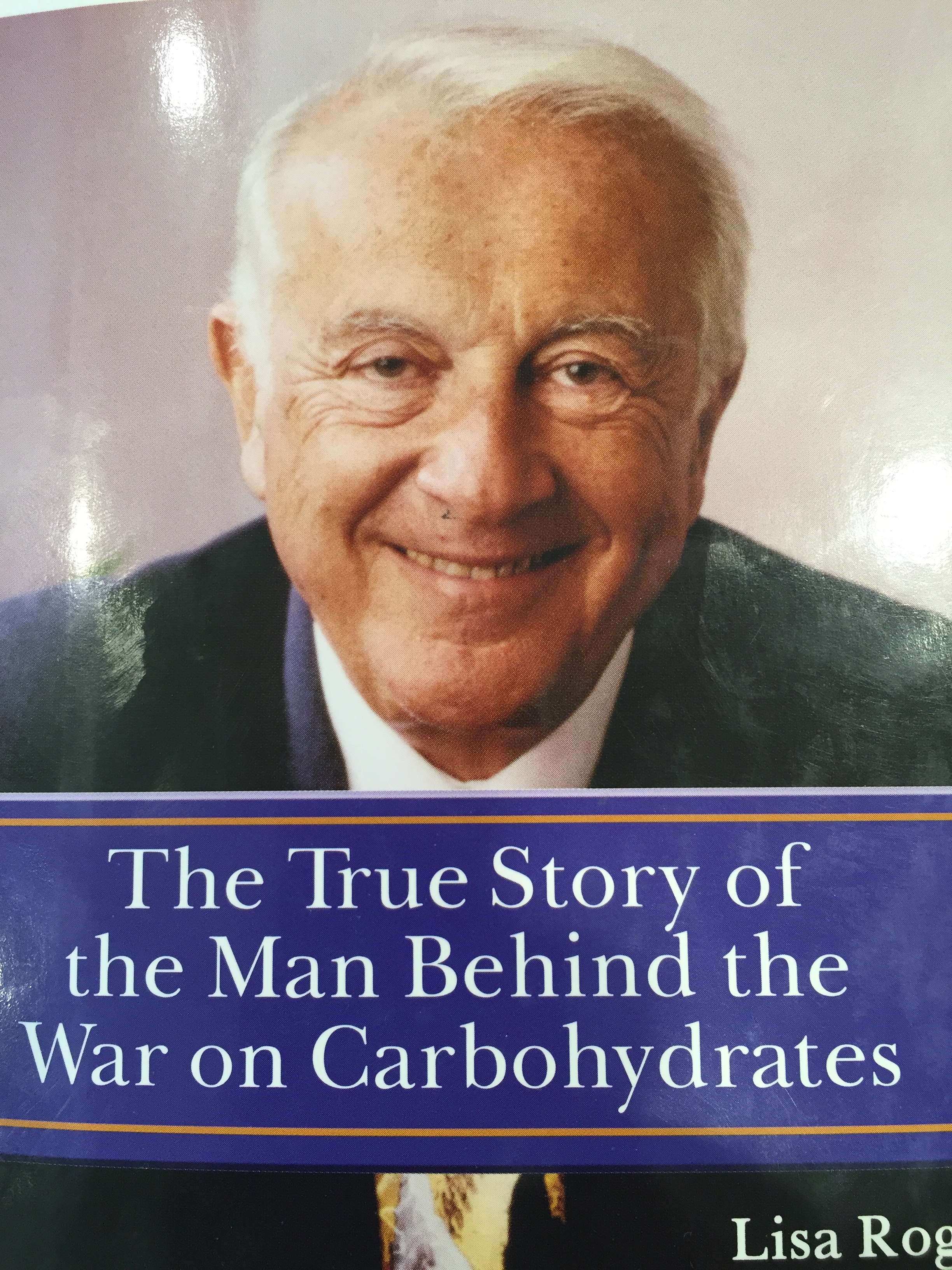 Robert Atkins, the “cardiologist” who popularized the ultra low carbohydrate, high fat diet (LCHF) with his 1972 book “Dr. Atkins Diet Revolution,” admonished his patients: “Now remember, happiness is a purple stick!”
When the body shifts to utilizing fat for energy rather than glucose, the result is the production of ketone bodies which can be detected in the urine by use of a ketostick. When your urine turns the stick purple, you have become ketotic and have successfully kept your carbohydrate intake low.
Entering ketoland, as I like to term it, is not for the faint of heart. It requires a fanatical devotion to the LCHF pope, a steely determination, and meticulous monitoring of your food for anything that resembles a dreaded carb.

My first experience of ketosis was as a third year medical student on the vast, communal wards of St. Louis City Hospital. Here, the teeming indigents, the IV drug abusers and the criminals of the city came to share graciously their noxious diseases with we innocent disciples of Hippocrates.
Amongst the patients with AIDS and endocarditis, pheochromocytoma and Mallory-Weiss syndrome, there were many insulin-dependent diabetics who, for themselves, poorly did care or who had decompensated due to infection.
Emanating from their mouths and other orifices, I, not uncommonly,   noted a peculiar odor. It smelled like pear drops or ripe apple or perhaps, (had I been familiar with it at the time) nail polish remover, and was quite distinctive. Most of my fellow students could not smell it and relied on blood or urine tests to confirm what I had already detected-KETONES!
These diabetics had gone into diabetic ketoacidosis (DKA), a life-threatening complication and I was smelling acetoacetic acid.
Peter Attia has written eloquently and interestingly about the difference between DKA and nutritional ketosis here. You can only get the dangerous type of DKA if you are unable to produce insulin like type I diabetics.
Attia tells this embarrassing story:

“I remember exactly where I was sitting in a clinic at Johns Hopkins in 2002 explaining to (admonishing, really) a patient who was on the Atkins diet how harmful it was because of DKA.  I am so embarrassed by my complete stupidity and utter failure to pick up a single scientific article to fact check this dogma I was spewing to this poor patient. If you’re reading this, sir, please forgive me. You deserved a smarter doctor. “

I’m pretty sure that,to this day, there are many doctors who only think of DKA when they hear the term ketosis.

The ketoland I have entered is not pathological: Atkins and, increasingly in the last decade, evidence-based and academic nutrition scientists, believe that ketosis may be a healthier state for our body to be in, free of wildly fluctuating,  inflammatory insulin cycles.
The cost of admission, however, is eschewing all bread, pasta, rice, potatoes, sugar-sweetened beverages, pastries, processed foods and, obviously, candy…that’s right out.
The tantalizing part of the diet is that it does not restrict your intake of fat in any way. In fact, to have your ticket punched into ketoland you must seek out fat in as pure a form as possible.
This morning, for example, I made myself a cup of coffee and adulterated it with heavy whipping cream (0 carbs, 50 calories of fat). Before leaving the house I took two boiled eggs and mixed them with mustard and safflower oil mayonnaise (30 grams of fat, no carbs) to eat later in the day.
I eat burgers, no fries, no buns, and I carry with me macadamia nuts, sunflower seeds, and almonds. I bought a huge jar of coconut oil and eat it by the teaspoon.

Ketoland is foreign territory for most of us. I had to enter foods into the myfitnesspal app to help me determine what the carbohydrate contents were.  I found myself paying close attention to portion size, not for the calories, but to help me better estimate how many carbs I was consuming.
For example, I thought that cauliflower would be a good snack, but 4 pieces of cauliflower cost me almost 5 carbs.

Happiness Is A Purple Stick 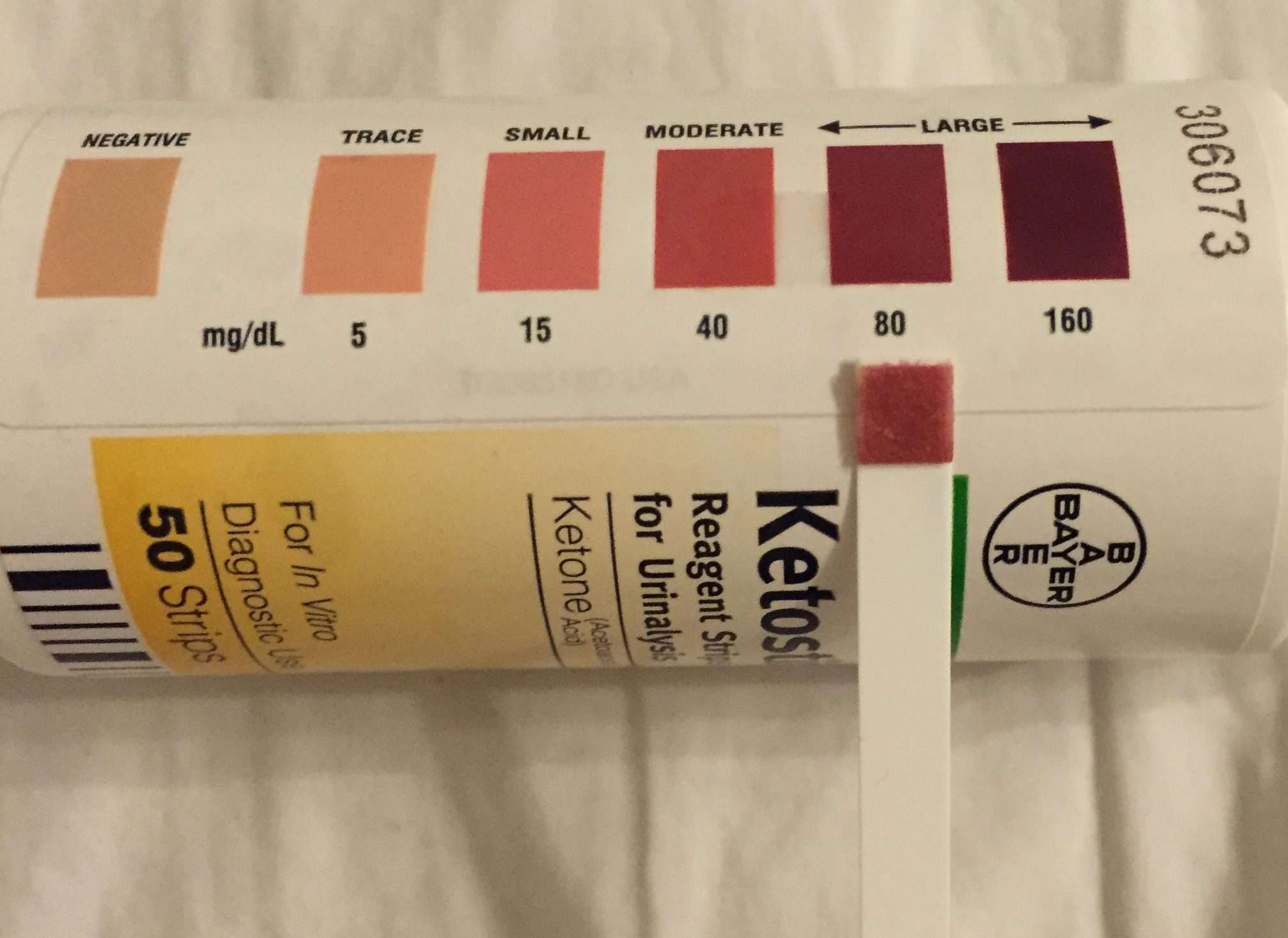 After 12 hours, during which I consumed 123 grams of fat, and only 26 grams of carbohydrates, my ketostick turned purplish.

What is it like in ketoland? Well, for one thing I only need 4 hours of sleep.  Asthma, which has plagued me all my life, is now nonexistent. Wrinkles have melted from my face, like wax from a burning candle. I have boundless energy. The best comparison I can come up with is the transformation Jeff Goldblum underwent in David Cronenberg’s (1986) The Fly. Come to think of it, he was probably also on a LCHF diet. Hopefully, I won’t experience his complete transformation.

****Warning. The above paragraph is an attempt at humor. None of it is true. Warning******

Seriously, I think it is too early to tell whether the tediousness of this diet will be worth it for me, but if I can last for a few weeks, I will have some good anecdotal short-term data to share with my patients on the diet’s effects on weight, energy, hunger, and personality.

If you are wondering why we make ketones, here’s a simple answer from Peter Attia.

For starters, it’s a vital evolutionary advantage.  Our brain can only function with glucose and ketones.  Since we can’t store more than about 24 hours worth of glucose, we would all die of hypoglycemia if ever forced to fast for more than 24 hours.  Fortunately, our liver can take fat and select amino acids (the building blocks of proteins) and turn them into ketones, first and foremost to feed our brains.  Hence, our body’s ability to produce ketones is required for basic survival .

If you’d like to watch a very well done 11 minute video on low carb high fat diets click here. You have to give an email address, which will send you Andreas Eenfeldt’s Diet Doctor updates. His site is very well done, free of ads and free of any industry influence.
You should be able to watch his diet revolution video, full of Swedish humor here.