A Farewell to Ketosis: Banting, Dickens and The Roots of Atkins

The skeptical cardiologist spent an interesting week in ketoland, counting carbs, and turning ketostix purple,  but ultimately decided this was not a world he wanted to inhabit long term. 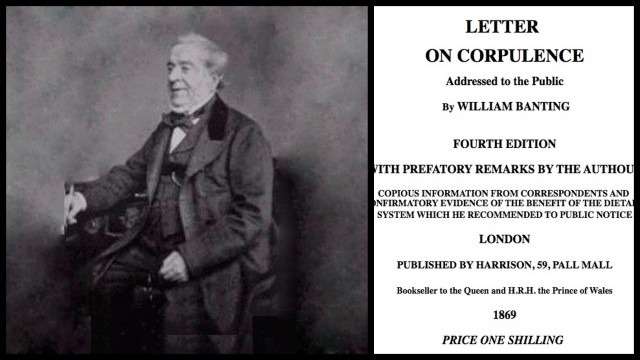 During that week I paid 1.99$ to download William Banting’s “Letter on Corpulence”(available here for free.) Banting, writing in 1869, first popularized a low carb, high fat diet for obesity with this pamphlet. He starts it off with these words:

“OF all the parasites that affect humanity I do not know of, nor can I imagine, any more distressing than that of Obesity, and, having emerged from a very long probation in this affliction, I am desirous of circulating my humble knowledge and experience for the benefit of other sufferers, with an earnest hope that it may lead to the same comfort and happiness I now feel under the extraordinary change,—which might almost be termed miraculous had it not been accomplished by the most simple common-sense means.”

The pamphlet was enormously popular and sold over 60,000 copies. Banting donated his 225 £ of profit to various charities, including:

In my last post, I closed with a paragraph  describing the benefits I had experienced of consuming a really high fat, very low carb diet: more energy, less sleep needed, asthma cured, wrinkled skin “melting away. This was supposed to be a humorous parody of how enthusiastic supporters of fad diets feel after they have jettisoned their bad eating habits but apparently most readers, unaware of my dry sense of humor (or perhaps not familiar with David Cronenberg’s The Fly) took this seriously.
Certainly, if I had felt significantly better on the Atkins diet I, like William Banting,  would still be on it. Alas, if anything, I felt worse.
My sleep was unaffected. Unllike, Robert Atkins, who noted his sleep requirements went from 8 hours a night to 5 hours a night, my sleep patterns were unchanged.
Energy levels in the morning were good but periodically in the afternoon, especially after even minor exertion but particularly after an intense workout, I would feel uncharacteristically exhausted.
Although my weight dropped 3-4 pounds this is typically what happens if I cut out alcohol from my diet for a week so it’s hard to say what the independent role of the extremely low carb intake and ketosis was.
My blood pressure dropped during the week and I had to cut back on my blood pressure medications to avoid dizziness. There were too many other variables occurring simultaneously that week (weight loss, lack of alcohol consumption) to know if this was independently associated with the ketogenic diet, however.
To be fair, supporters of ketogenic/Atkins diets warn us that during  the initial weeks, we may feel worse, experiencing the so-called “low carb flu.” To fully test it I should have stayed on it for 3-6 weeks and entered a maintenance phase in which I could have consumed more carbohydrates.
However, after a week of having to analyze in detail the carb or net carb content of everything that I consumed, I realized this was not something I wanted to do long term.
For the significantly obese like William Banting who  struggle to achieve weight loss the ketogenic/Atkins diet is likely to be a much better experience than for someone like me who is not overweight. Banting’s diet prior  to his “miraculous change” consisted primarily of bread, milk and beer and it is likely that cutting out the bread and beer alone would have had a dramatic effect on his weight and well-being.
My adventure in ketoland inspired me to update my dietary recommendations , the pdf of which is here (What Diet Is Best For Heart Health).
It would nice if we had some sort of genetic test that would tell us what diet is perfect for us. Unfortunately, until that is developed, trial and error is the only viable approach. Some, like William Banting, Robert Atkins and the  lady at zerocarbizen.org will thrive on very low carbs whereas others, like Dean Ornish and Nathan Pritikin prosper on a very low fat diet.
Most individuals will be served best by a diet of real, minimally processed food with lots of different vegetables growing both above and below ground and eaten in moderation.
Unbantingly Yours
-ACP
N.B. Here, in a nutshell, in Banting’s own words ,is the essence of the Banting diet:
“I never eat bread unless it is stale, cut thin, and well. toasted. I very seldom take any butter, certainly not a pound in a year. I seldom take milk (though that called so, in London, is probably misnamed), and I am quite sure that I do not drink a gallon of it in the whole year. I occasionally eat a potato with my dinner, possibly to the extent of 1 lb. per week. I spoke of sherry as very admissible, and I am glad of this opportunity to say, that I have since discovered it promoted acidity. Perhaps the best sherry I could procure was not the very best, but I found weak light claret, or brandy, gin, and whisky, with water, suited me better; and I have been led to believe that fruit, however ripe, does not suit me so well taken raw as when cooked, without sugar. I find that vegetables of all kinds, grown above ground, ripened to maturity and well boiled, are admirable; but I avoid all roots, as carrot, turnip, parsnip, and beet. ”
Excerpt From: William Banting. “Letter On Corpulence.” Foster, 2014. iBooks. https://itun.es/us/fOKP3.l

11 thoughts on “A Farewell to Ketosis: Banting, Dickens and The Roots of Atkins”