Donald Trump recently appeared on the Dr. Oz show and handed a letter to the celebrity medical charlatan and TV host, Mehmet Oz.
The letter was written by his personal physician , Dr. Harold Bornstein, 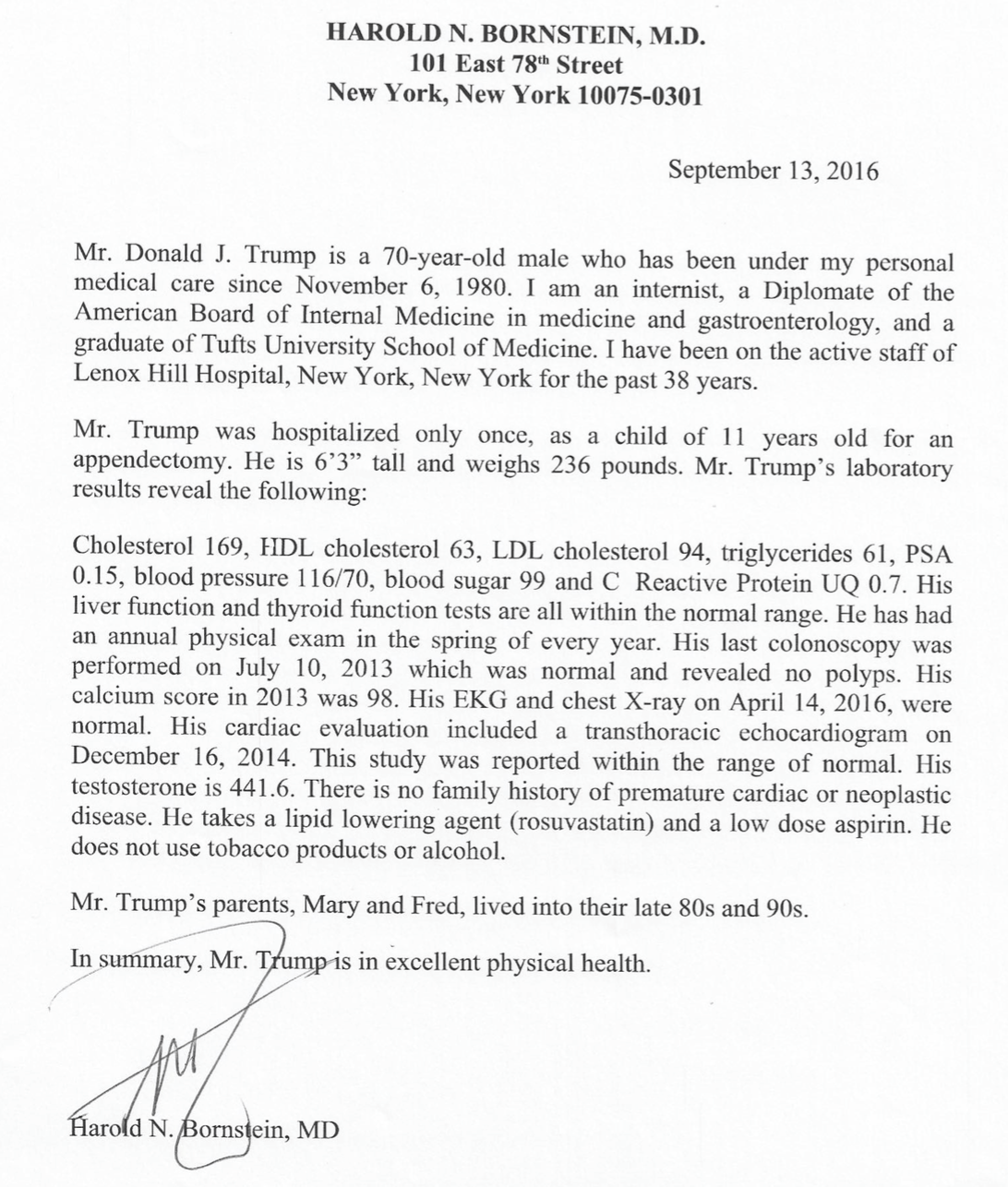 and summarized various  laboratory and test  results which led Bornstein to conclude  that Mr. Trump is in excellent health (Bornstein did not repeat his earlier, bizarre statement that “If elected, Mr. Trump, I can state unequivocally, will be the healthiest individual ever elected to the presidency.”)
From a cardiovascular standpoint the following sentence stood out:

Regular readers of the skeptical cardiologist should be familiar with the coronary calcium scan or score (CAC) by now.  I’ve written about it a lot (here, here, and here) and use it frequently in my patients, advocating its use to help better assess certain  patient’s risk of sudden death and heart attacks.

The CAC scan utilizes computed tomography (CT)  X-rays, without the need for intravenous contrast, to generate a three-dimensional picture of the heart. Because calcium is very apparent on CT scans, and because we can visualize the arteries on the surface of the heart that supply blood to the heart (the coronary arteries), the CAC scan can detect and quantify calcium in the coronary arteries with great accuracy and reproducibility.

What Does Donald’s Trump’s Calcium Score Tell Us About His Risk Of A Major Cardiac Event?

We know that, on average, even if you take a statin drug (Trump is taking rosuvastatin or Crestor), the calcium score goes up at least 10% per year which means that 3 years after that 98 score we would predict Trump’s calcium score to be around 120.
Based on large, observational studies of asymptomatic patients, Calcium scores of 101 to 400 put a patient in the moderately high risk category for cardiovascular events.
When I read a calcium score of 101-400, I make the following statements (based on the most widely utilized reference from Rumberger

Clinton versus Trump: Zero is Better

Since we know that Hillary Clinton recently had a calcium scan with a score of zero, we can estimate that Trump’s risk of having a heart attack or dying from a cardiac event is markedly  higher than Clinton’s.
Clinton, born October 26, 1947 is 68 years old and we can enter her calcium score into the MESA calcium calculator to see how she compares to other women her age. A  coronary calcium score of 6 is at the 50th percentile for this group.
Interestingly, Trump’s score of 98 at age 67 years was exactly at the 50th percentile. In other words half of all white men age 67 years are below 98 and half are above 98, creeping into the moderately high risk  category.
(This should not be surprising, I touched on the high estimated cardiovascular risk of all aging men in my post entitled “Should all men over age sixty take a statin drug?”)
So, based on his coronary calcium score from 2013, Donald Trump has a  moderate build up of atherosclerotic plaque in his coronary arteries and is at a seven-fold higher risk of a cardiac event compared to Hilary Clinton.
Let the law suits and tweets begin!
Electorally Yours,
-ACP