Every two years the skeptical cardiologist has to get recertified in Basic Life Support for medical personnel. This involves a review of what, the American Heart Association has decided, are important changes in guidelines for Emergency Cardiac Care and cardiopulmonary resuscitation (CPR).
I highly recommend all of you undergo such training. Although the survival rate of patients with “out of hospital cardiac arrests” is very low, your appropriate actions could be crucial in saving the life of a stranger or a loved one.
About a year ago one of my patients suddenly, and without any warning symptoms, collapsed at work. Fortunately for him, a co-worker had undergone CPR training and initiated chest compressions right away. When paramedics arrived 15 minutes later he was defibrillated from ventricular fibrillation and taken to a nearby hospital.
Our best information on cardiac arrest suggests that without CPR, irreversible brain damage (due to lack of oxygen) develops in about four minutes after the heart stops beating. Even with good CPR, the longer the time interval from arrest to defibrillation, the less likely the patient is to survive with good brain function.
Thus, the two keys to helping someone who drops dead next to you are beginning effective CPR (and compression only is OK) and defibrillating a fibrillating heart as soon as possible.
My patient was comatose on arrival to the hospital and was put into a hypothermic state, a process which has been shown to improve neurological outcome in cardiac arrest victims. Doctors informed his wife that they thought his prognosis was bad-less than 5% chance of surviving with intact brain function.  After three days he awoke from his coma and was transferred to my hospital.
I visited him in the ICU and other than a sore chest and an inability to remember the events surrounding his cardiac arrest, he was mentally normal and felt great. He continues to do very well to this day, but without the bystander CPR that he received (followed by the defibrillation) he would be one of the 350,000 who die of cardiac arrest in the US each year.
If the co-worker had not initiated CPR for the many minutes it took for EMRs to arrive, my patient’s brain would have been dying from lack of oxygen and it is most likely he would have suffered severe encephalopathy or brain death.

Recognizing when someone needs CPR is a critical first step in the chain of events that can improve survival in cardiac arrest.

You are looking for two things before starting CPR:

Agonal respirations have also been described as “snoring, snorting, gurgling, or moaning or as barely, labored, noisy, or heavy breathing.”  Studies have shown that agonal respirations are common in the early minutes after cardiac arrest and are associated with good outcomes.

Two Steps To Save A Life

The two key components of resuscitation are CPR and defibrillation.

Performing these steps is simple and straightforward.
The earlier they are started, the more likely the victim is to survive.
If someone collapses near you and they are unresponsive and not breathing, they need CPR and an AED. Call for help as you are starting CPR. 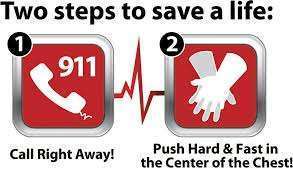 CPR consists of repeated compressions of a victim’s chest.

Everyone has seen dramatizations of CPR and it is quite simple to do even without training. Basically, you want to “push hard and fast in the center of the chest.”
CPR training undergoes some tweaking over time as more scientific data is obtained but the fundamentals remain the same. The changes that the AHA is emphasizing in their current CPR courses are:
-depress the chest at least 2 inches
-depress the chest 100-120 times per minu 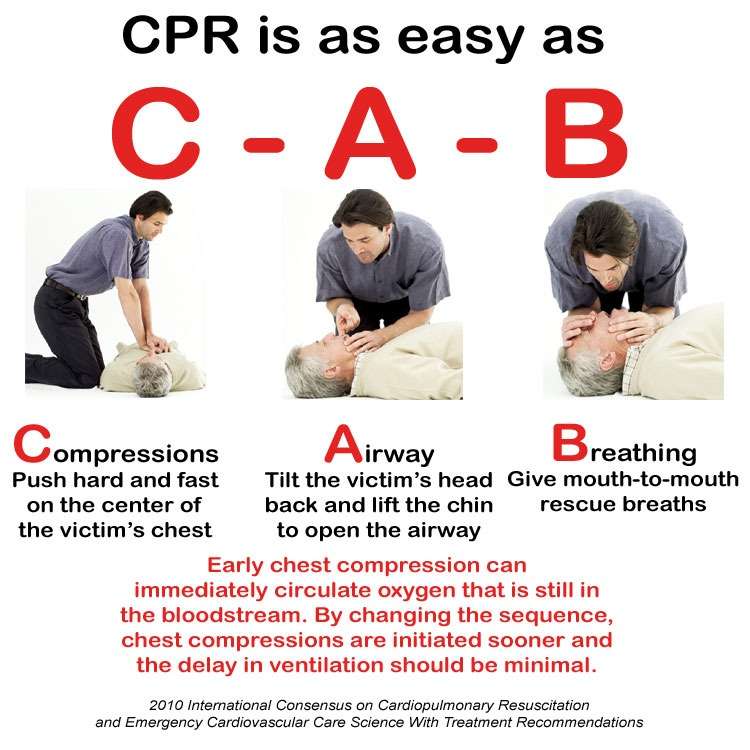 te (as opposed to just >100 time per minute).
Of note, the recommended sequence has changed from A, B, C, to C, A, B. Compressions right away followed by assessment of airway and then mouth-to-mouth breathing.  In fact, because compressions without breaths have been shown to be as effective as with breaths, if you are uncomfortable giving breaths, recommendations now are to just do CPR.


Initiating CPR and calling 911 are the greatest initial things you can do for the person who collapses next to you.
However, the earlier you can defibrillate that person from ventricular fibrillation, the better their chance of survival.
Ambulatory electronic defibrillators or AEDS , if available, are very easy to use devices that can shorten the time to defibrillation and are the second key to successful resuscitation of cardiac arrest victims in the community.
I’ll talk about using them in a subsequent post.
antimortatorially yours
-ACP