The skeptical cardiologist spent way too much time soliciting and analyzing the arguments against Amendment 3 on a gorgeous fall Sunday.
I found two sites to be very helpful in sorting through the “smokescreen” put up by opponents: Campaign for Tobacco-free Kids and the blog of Megan Green.  Both of these sites I have concluded are only interested in helping children and have unimpeachable credentials.
If you take the time to read these discussions I think you will conclude as I have that Amendment 3 should be supported as a measure that will both reduce cigarette smoking and enhance early childhood education in Missouri.
Megan Green points out that the complexity of the Amendment relates to :

Washington University in St. Louis put out studies in 2009 and 2012 about the reasons that the last two cigarette tax increases failed. It was largely because proponents of the tax were fighting big tobacco, wholesale tobacco, convenience stores, and pro-life, each of which are very powerful lobbies. It is nearly impossible to fight all of them and win.

Here’s what I concluded:

Misguided Argument 1 :There are restrictions on the money being used on stem cell research. This appears to be why Washington University sent an email to all their faculty urging them to vote no.

Utilizing lessons learned from the 2006 campaign detailed in the study, an attempt was made to neutralize the opposition by adding specific language stating that the money would not be used to support abortions or stem cell research in the 2012 initiative, which also failed. As detailed in a 2012 study also from Washington University in St. Louis, the pro-life groups were still not satisfied, but were not as active as in prior campaigns due to the ballot language excluding funding of stem cell research.

Fast forward to 2016, and once again proponents of a cigarette tax took the recommendations of the Washington University in St. Louis study, (ironically, the same group that is now opposing us) and added the protective language to the policy. The Washington University report recognized the 2012 anti-abortion, anti-stem cell language helped, but it was not strong enough to stop all pro-life opposition. In order to neutralize opposition, we made adjustments and used the following language:

2016 language: “None of the funds collected, distributed, or allocated from the Early Childhood Health and Education Trust Fund shall be used for human cloning or research, clinical trials, or therapies or cures using human embryonic stem cells, as defined in Articles IX, section 38(d).”

The effect of this language is ensuring the revenue from this specific 60-cent tobacco increase can only go towards early childhood and smoking cessation/prevention programs. The language does nothing to change Missouri’s existing laws as they relate to abortion or stem cell research or funding. A legal opinion was even issued by retired Missouri Court of Appeals Judge James R. Dowd where he stated that “It is evident that there is no risk that a Missouri court could read the proposed amendment as a repeal of Amendment 2 (the Amendment authorizing stem-cell research), either expressly or by implication.”

Misguided Argument #2. The measure will fund religious and private schools with public money.

Raise Your Hands for Kids (an excellent site devoted to supporting the amendment which addresses in detail all of these concerns)  has a succint document that addressess all the opponents issues which answers this concern by saying:

The Establishment Clause of the U.S. Constitution prohibits public dollars going towards religious instruction. Missouri education leaders suggest that to adequately serve our birth through 5 population and deliver quality pre-K, Missouri must have a blended funding model.

For a really detailed analysis of the early childhood education 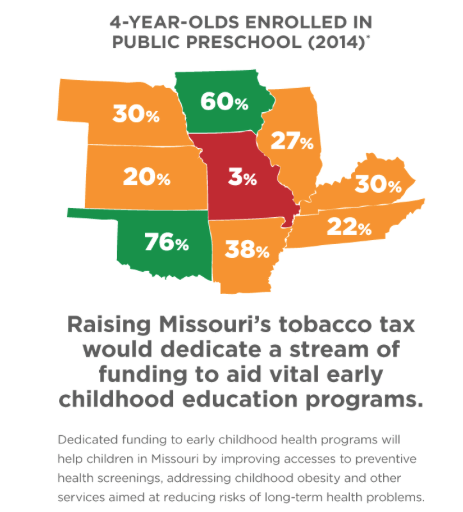 situation in Missouri (which is shockingly lagging other states) take the time to read Megan Green’s answer to this argument:

As the daughter of a retired NEA Local President there are few things that matter more to me than the protection of public education. I also think that it is important to understand a few things about the landscape of early childhood education in Missouri. First, the Establishment Clause of the U.S. Constitution prohibits public dollars from going toward religious instruction. Funds cannot be used on religious education, period. With that said, religious organizations, such as the YMCA already receive public money to provide early childhood programing so long as that funding does not go toward religious education.

Second, it’s important to understand how the current system of early childhood education is funded. In Missouri we already have a blended funding model between public and private institutions. Private schools already receive early childhood programs and, in fact, most programs in this state are private. Parents receive child care subsidies, or for lack of a better term, vouchers. Programs also receive food and other health related government funding. In return, these programs must adhere to state licensing standards.

Although I would love for Missouri to have a completely public early education system, it is irrational to think we could move to a completely public system. Most of the supply in Missouri is in the private sector, and we also use public money at private institutions in the form of child care subsidies and child and adult food care program reimbursement. A prime example of this are Head Start programs, which are often private organizations, such as Grace Hill, the YWCA, and the Urban League, who receive government contracts to run the program.

Facilities have to be licensed or accredited in Missouri to receive those funds. Missouri recently passed a quality rating system this past year that ensures quality. Although I support when St. Louis Public Schools added pre-k programming to its elementary schools, the decision was done without the consultation of those in the private sector, and as a result, some really high quality programs serving low-income kids went out of business because they couldn’t compete with free.

The best delivery model for early childhood education services for children ages birth through 5 is a public/private model. Public schools are not in the business of taking care of infants and toddlers. The only way we can reach all children is through a blended model, and we already do that in Missouri — Head Start and Missouri Preschool Project public money’s go to private providers.

If we already had the bulk of our early childhood programs in the public sector, then I would be all for it going just to the public sector, but that is not the system we have. Only having the funds in the public sector would disenfranchise many children in rural areas where schools would have to build additions to accommodate rather than being able to use existing programs. Couple that with the travel times induced by closing programs in small towns and having to bus or drive kids that young to school districts is not in the best interest of kids. There has to be a public/private partnership where school districts can contract with quality programs to replicate their programs in a public setting rather than starting from scratch. I’m rarely on the opposite side as the teachers unions, but I am in this case because we have real financial, logistical, and educational reasons to not switch to a completely public system.

Unless we are ready to draw those hard lines in the sand, that no non-profit or Head Start Program should be receiving government money since they are not public entities, I encourage you to vote YES on Amendment 3.

Misguided Argument #3. Studies have shown that the increase in cigarette tax proposed is not enough to impact cigarette smoking. This seems to be the argument of the major health organizations that have come out against the tax.

I really searched hard to find any study that supports this claim and couldn’t find one. For a discussion of how effective cigarette taxes are in reducing smoking read this pdf from The Campaign for Tobacco-Free Kids

Misguided Argument #4. This is a regressive tax which will hurt the poor more than the affluent.
From a review in Tobacco Control:

The regressivity of existing taxes, however, does not necessarily imply that tax increases are regressive as well. In many countries, tobacco use among the lowest income/SES populations is most responsive to price, while use among the highest income/SES populations is least responsive. Thus, a tax increase that raises tobacco product prices will lead to the largest declines in smoking among the lowest income persons, and the burden of tax increase will fall more heavily on higher income consumers whose smoking behaviour changes little in response to the tax increase.

I urge all Missouri readers to educate yourself on Amendment 3 by reading the source documents and fully understanding the document.

Antinicotinely Yours
-ACP
And here’s some more stuff to ponder
The St. Louis Post Dispatch supports Amendment 3 after a judge ruled that verbiage in the Amendment would not limit funding for stem cell research in the state
Quotes from Transnational and U.S. Tobacco Companies (from tobaccofreecenter.org)