The skeptical cardiologist stopped wearing his initial wearable piece of technology (a Garmin device that constantly prompted him to move, described here), within 6 months of purchasing it; it just wasn’t worth the effort of charging and putting on the the wrist.
I am not alone in finding FitBit type devices not worth wearing after awhile. ConscienHealth points out that sales and stock price of FitBit are down significantly.  Part of this is competition, part saturation of the market, but part must be due to individuals going through a process similar to mine.
The great promise that wearable fitness/sleep/activity tracking devices would make us healthier has not been fulfilled.
A recent study showed that among obese young adults, the addition of a wearable technology device to a standard behavioral intervention resulted in less weight loss over 24 months.

However, knowing I was a fan of all things Apple, the eternal fiancee  bought me a Series 1 Apple Watch, which I have come to love. This love has little to do with how the device tracks my steps or my sleep or my pulse or my movement.
Let me count the ways I do love my Apple Watch…

During a busy day of seeing patients in the office I typically will receive multiple calls from the ER or other doctors I have to talk to immediately.  Now, I can rapidly screen my calls with a tilt of my wrist and excuse myself to take the call. If I’ve been trying to get ahold of Dr. X to discuss a mutual patient, and he calls while I’m doing a transesophageal echocardiogram, I can have someone touch my watch instead of reaching into my pants for my iPhone, or searching in my office for it, or missing the call altogether.

And although previously I would take calls while driving, the watch makes this process much simpler and therefore much safer.

2. Receiving and responding to text messages does not require accessing my iPhone.

This doesn’t seem like that big of a deal, but again, the ability to rapidly scan incoming texts with just a tilt of the wrist greatly facilitates expeditious screening and processing.

The Apple Watch allows response via either audio recording (translated seamlessly and quickly to text) or pre-set standard responses or emojis.

4. Checking the time is a lot easier (I know, all watches do this, but I’ve haven’t worn a watch for about 20 years).


5. If I misplace my iPhone (this happens roughly once per hour when I am at home), I can “ping” it by pushing a button on my Apple Watch: follow the ping and “voila!” I have found my iPhone. Most of the time it is lying under a piece of paper or article of clothing within a few feet of where I’m working, but sometimes it is in an obscure corner for obscure reasons.
Here’s a true story which illustrates my tremendous absent-mindeness and the value of the “ping.”

I left my office Friday evening and after stepping outside I realized I did not have my iPhone in its usual location, the left front pocket of my pants. I searched the pockets in my pants and in the jacket I was wearing to no avail. I began heading back to my office believing that I had left it on my desk but then realized that I might have put it in my satchel. Not in my satchel. A bright idea then occurred to me: ping the iPhone to see if it was in the satchel, but hidden.
Sure enough I heard the iPhone ping. But it was not in the satchel; it was (for obscure reasons) in my shirt pocket (a place that apparently makes it undetectable to me).
6. Information on local weather is immediately available. I have 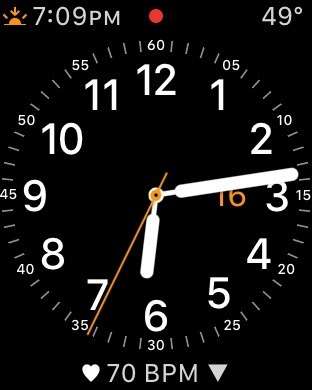 configured my watch “dial” to show me the local temperature. Right now with a flick of my wrist I can see that it’s 17 degrees outside and I’m going to have to dress warmly. I’ve also configured my watch dial to tell me when sunrise/sunset is and what my heart rate is.
These last two things, although immensely interesting, are not that helpful.
Oh, excuse me, my watch timer is telling me my eggs are done.
Pingophilically Yours,
-ACP
P.S. I’m still in the process of evaluating the work-out/sleep/move/mindfulness features of Apple Watch and hope to write about it in the near future.
Feel free to share the things you love or hate about your Apple Watch below.