The skeptical cardiologist has been testing the comparative accuracy of two hand-held mobile ECG devices in his office over the last month. I’ve written extensively about my experience with the AliveCor/Kardia (ACK) device here and here. Most recently I described my experience with the Afib Alert (AA) device here.
Over several days I had my office patients utilize both devices to record their cardiac rhythm and I compared the device diagnosis to the patient’s true cardiac rhythm.

In 14 patients both devices correctly identified normal sinus rhythm. AFA does this by displaying a green check mark , ACK by displaying the actual recording on a smartphone screen along with the word Normal.
The AFA ECG can subsequently uploaded via USB connection to a PC and reviewed in PDF format. The ACK PDF can be viewed instantaneously and saved or emailed as PDF.

Normal by AFA/Unreadable or Unclassified by AliveCor

In 5 patients in normal rhythm (NSR) , AFA correctly identified the rhythm but ACK was either unreadable (3) or unclassified (2). In the not infrequent case of a poor ACK tracing I will spend extra time adjusting the patient’s hand position on the electrodes or stabilizing the hands. With AFA this is rarely necessary.

In this 70 year old man the AFA device recording was very good and the device immediately identified the rhythm as normal.

ACK recording was good quality but its algorithm could not classify the rhythm. 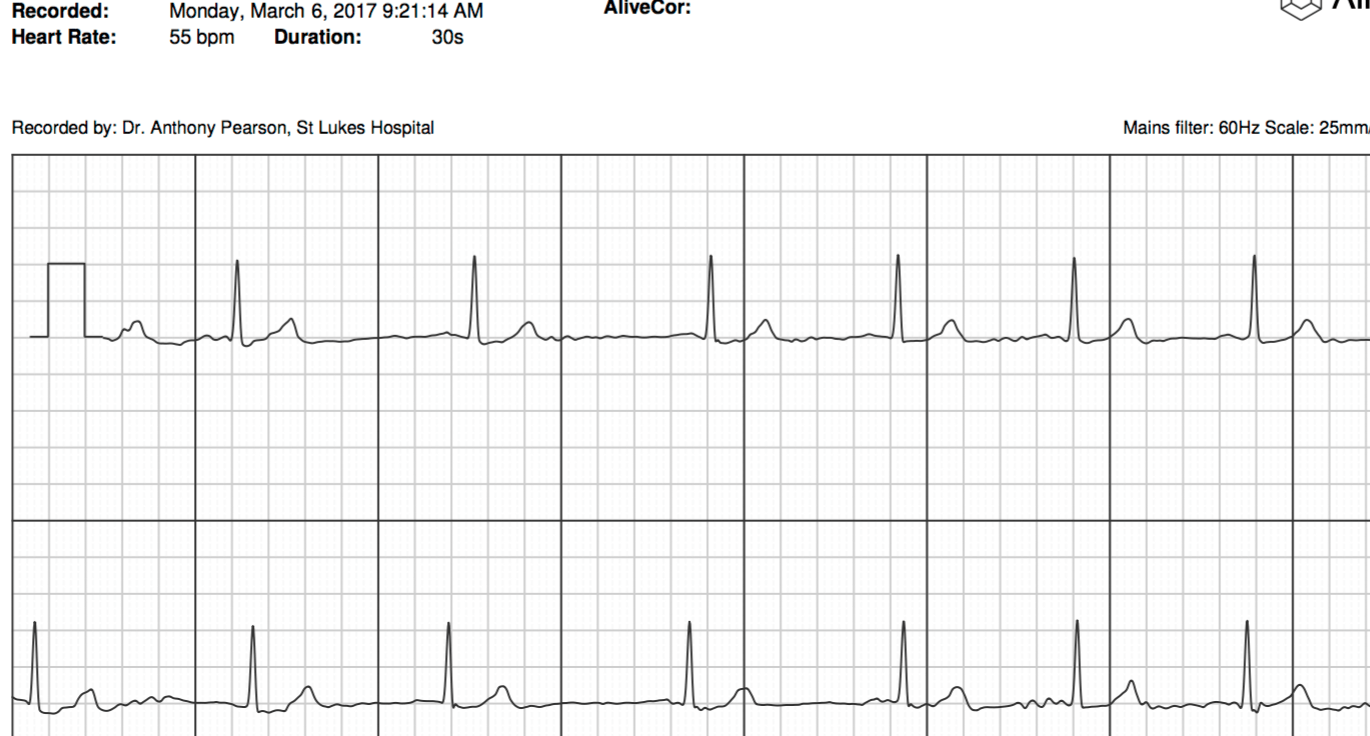 There were 3 cases were AFA diagnosed atrial fibrillation (AF) and the rhythm was not AF. These are considered false positives and can lead to unncessary concern when the device is being used by patients at home. In 2 of these ACK was unreadable or unclassified and in one ACK also diagnosed AF.

A 90 year old woman with right bundle branch block (RBBBin NSR was classified by AFA as being in AF.

The ACK algorithm is clearly more conservative than AA. The ACK manual states:

If you have been diagnosed with a condition that affects the shape of your EKG (e.g., intraventricular conduction delay, left or right bundle branch block,Wolff-Parkinson-White Syndrome, etc.), experience a large number of premature ventricular or atrial contractions (PVC and PAC), are experiencing an arrhythmia, or took a poor quality recording it is unlikely that you will be notified that your EKG is normal.

One man’s rhythm confounded both AFA and AC. This gentleman has had atrial flutter in the past and records at home his rhythm daily using his own AliveCor device which he uses in conjunction with an iPad. 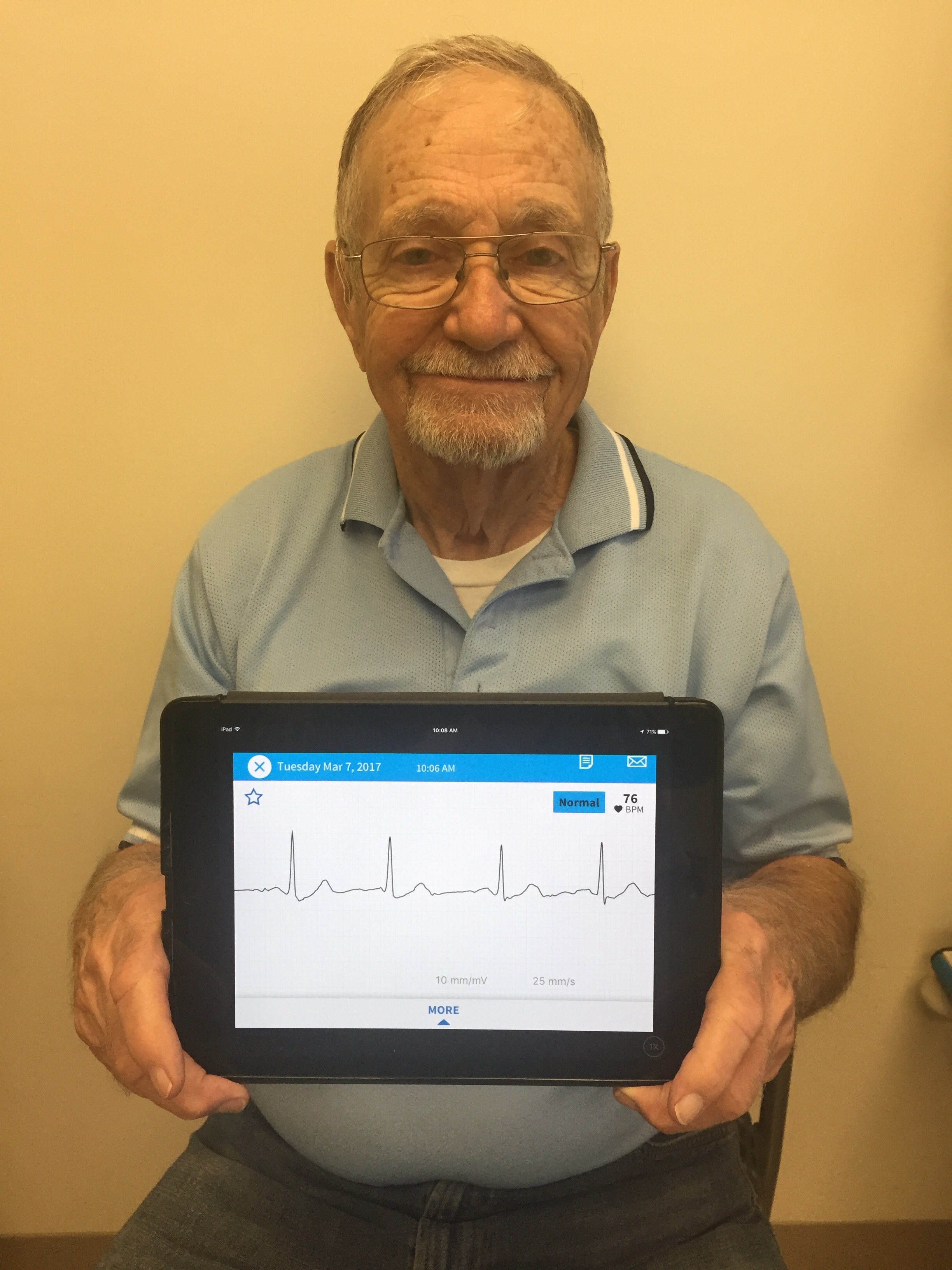 During our office visits we review the recordings he has made. He was quite bothered by the fact that he had several that were identified by Alivecor as AF but in fact were normal.

A recording he made on May 2nd at 845 pm was read as unclassified but with a heart rate of 149 BPM. The rhythm is actually atrial flutter with 2:1 block. 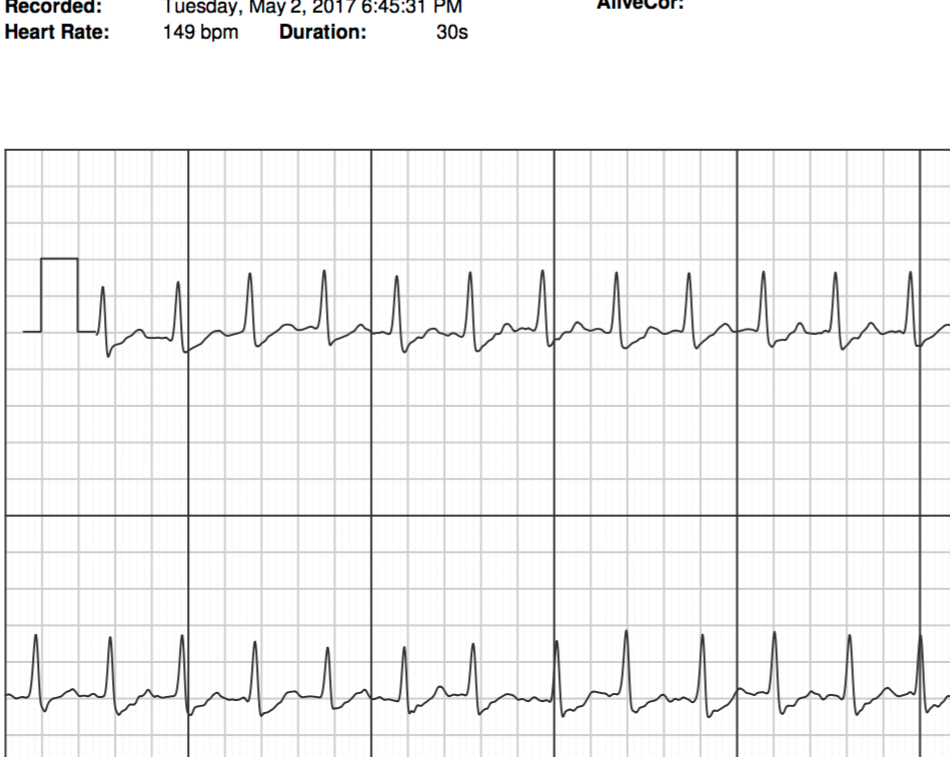 Sure enough, when I recorded his rhythm with ACK although NSR (with APCS) it was read as unclassified 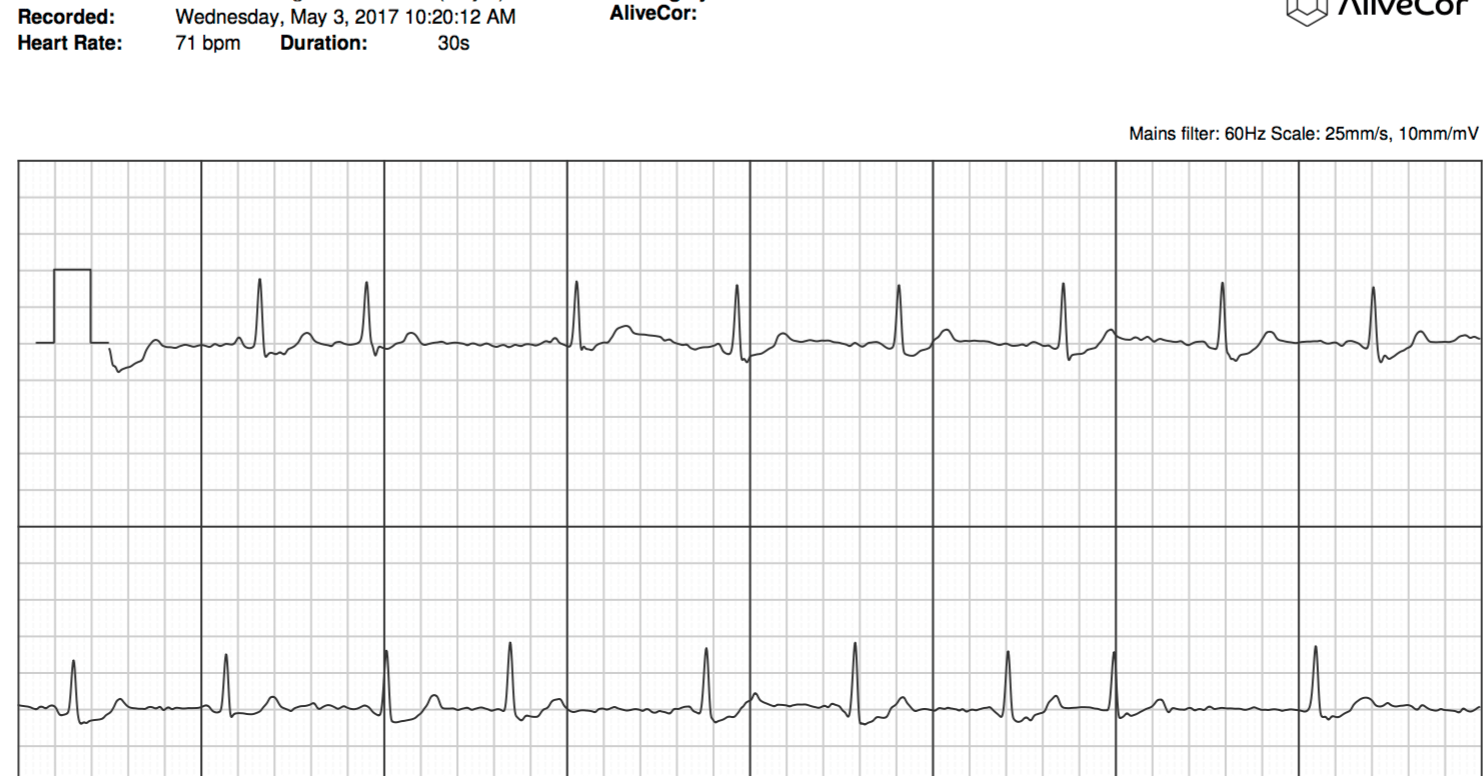 AFA classified Lawrence’s rhythm as AF when it was in fact normal sinus with APCs.

One patient a 50 year old woman who has a chronic sinus tachycardia and typically has a heart rate in the 130s, both devices failed.
We could have anticipated that AC would make her unclassified due to a HR over 100 worse than unclassified the tracing obtained on her by AC (on the right)was terrible and unreadable until the last few seconds. On the other hand the AFA tracing was rock solid throughout and clearly shows p waves and a regular tachycardia. For unclear reasons, however the AFA device diagnosed this as AF.


Accuracy in Patients In Atrial Fibrillation

In 2/4 patients with AF, both devices correctly classified the rhythm.. 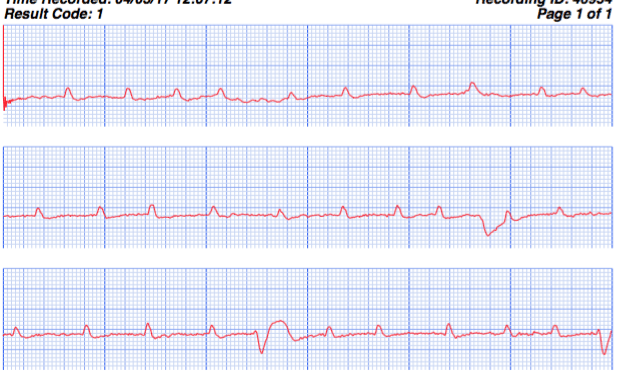 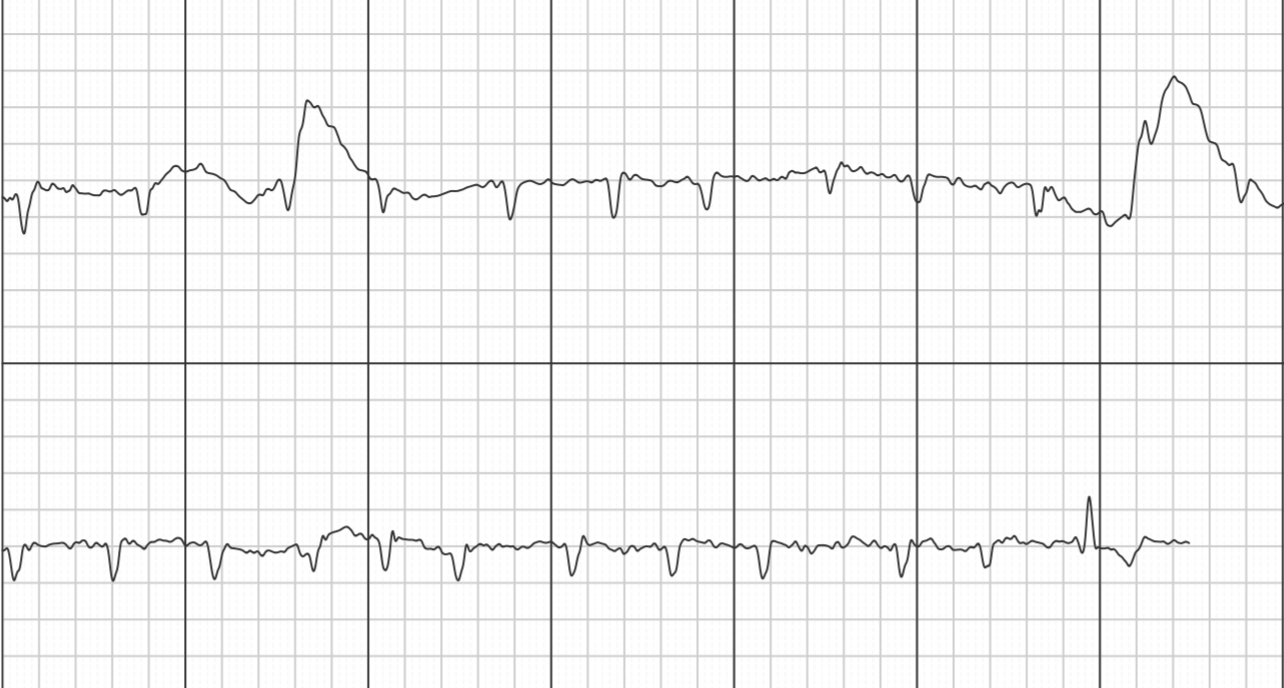 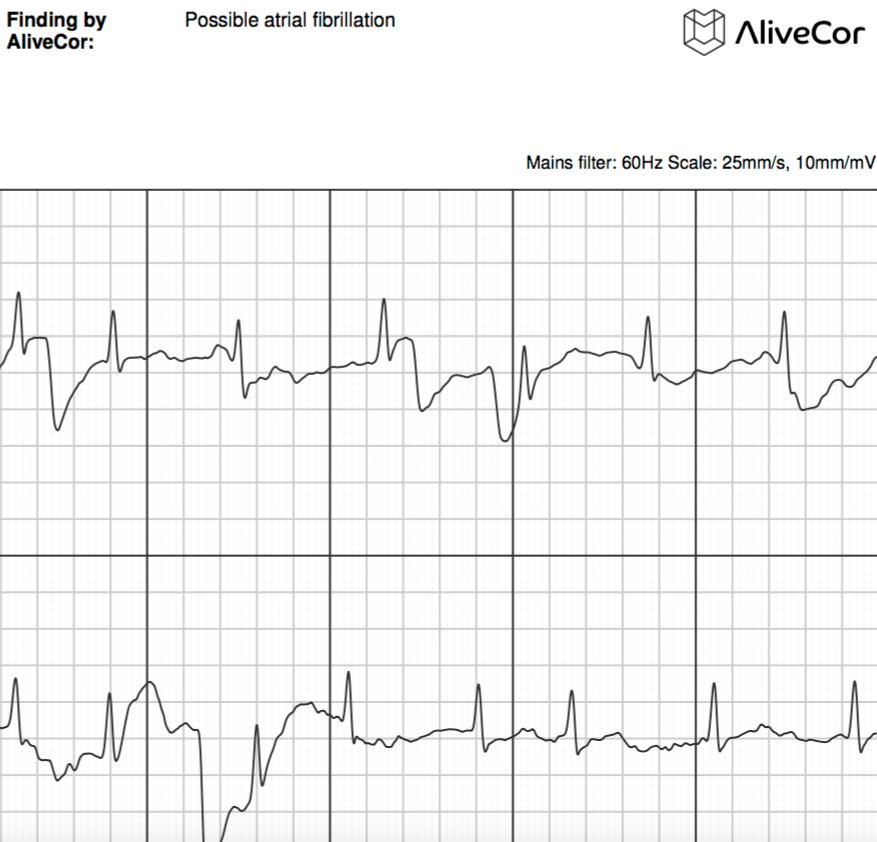 One patient who I had recently cardioverted from AF was the only false positive ACK. AliveCor tracing is poor quality and was called AF whereas AFA correctly identified NSR> 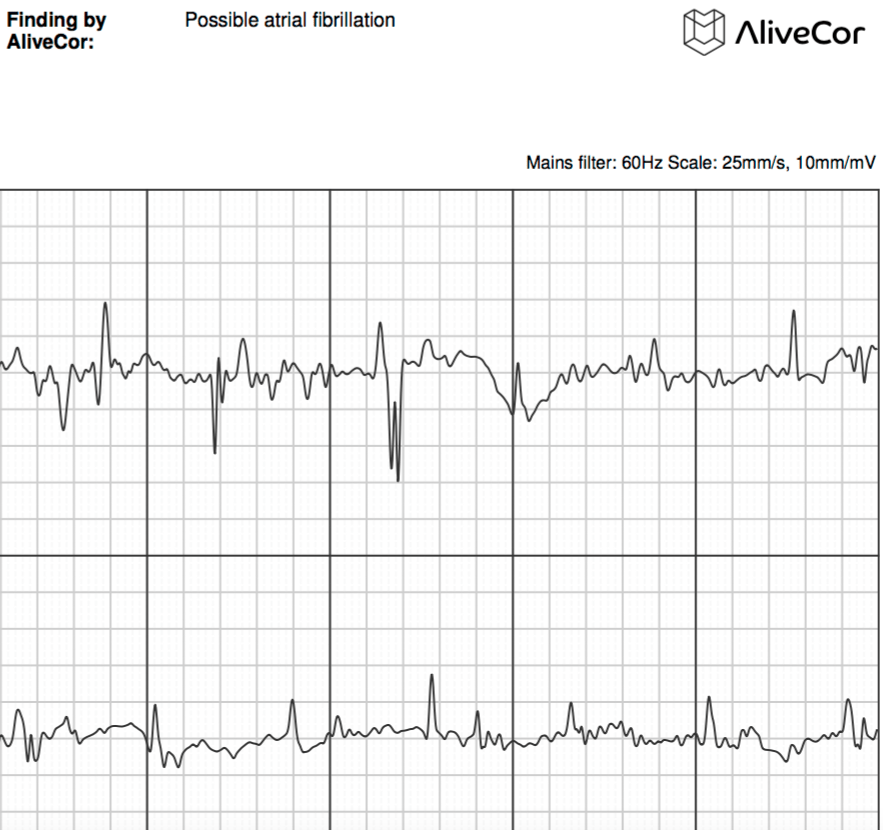 The sensitivity of both devices for detecting atrial fibrillation was 75%.
The specificity of AFA was 86% and that of ACK was 88%.
ACK was unreadable or unclassified 5/26 times or 19% of the time.

The sensitivity and specificity I’m reporting is less than reported in other studies but I think it represents more real world experience with these types of devices.

In a head to head comparison of AFA and ACK mobile ECG devices I found
-Recordings using AfibAlert are usually superior in quality to AliveCor tracings with a minimum of need for adjustment of hand position and instruction.
-This superiority of ease of use and quality mean almost all AfibAlert tracings are interpreted whereas 19% of AliveCor tracings are either unclassified or unreadable.
-Sensitivity is similar. Both devices are highly likely to properly detect and identify atrial fibrillation when it occurs.
-AliveCor specificity is superior to AfibAlert. This means less cases that are not AF will be classified as AF by AliveCor compared to AfibAlert. This is due to a more conservative algorithm in AliveCor which rejects wide QRS complexes, frequent extra-systoles.
Both companies are actively tweaking their algorithms and software to improve real world accuracy and improve user experience but what I report reflects what a patient at home or a physician in office can reasonably expect from these devices right now.
-ACP

19 thoughts on “AfibAlert Versus AliveCor/Kardia: Which Mobile ECG Device Is Best At Accurately Identifying Atrial Fibrillation?”