Why Are The Dutch So Heart Healthy and Happy (And Tall)? Part I: Is It Their Diet?

The Skeptical Cardiologist and his  eternal fiancee’ recently spent 5 days in the Netherlands trying to understand why the Dutch are so happy and heart healthy.
We were driven by Geo (former statin fence-sitter) from Bruges to Haarlem, a city of 150,000, which lies about 15 km west of Amsterdam and about 5 km east of the North Sea. 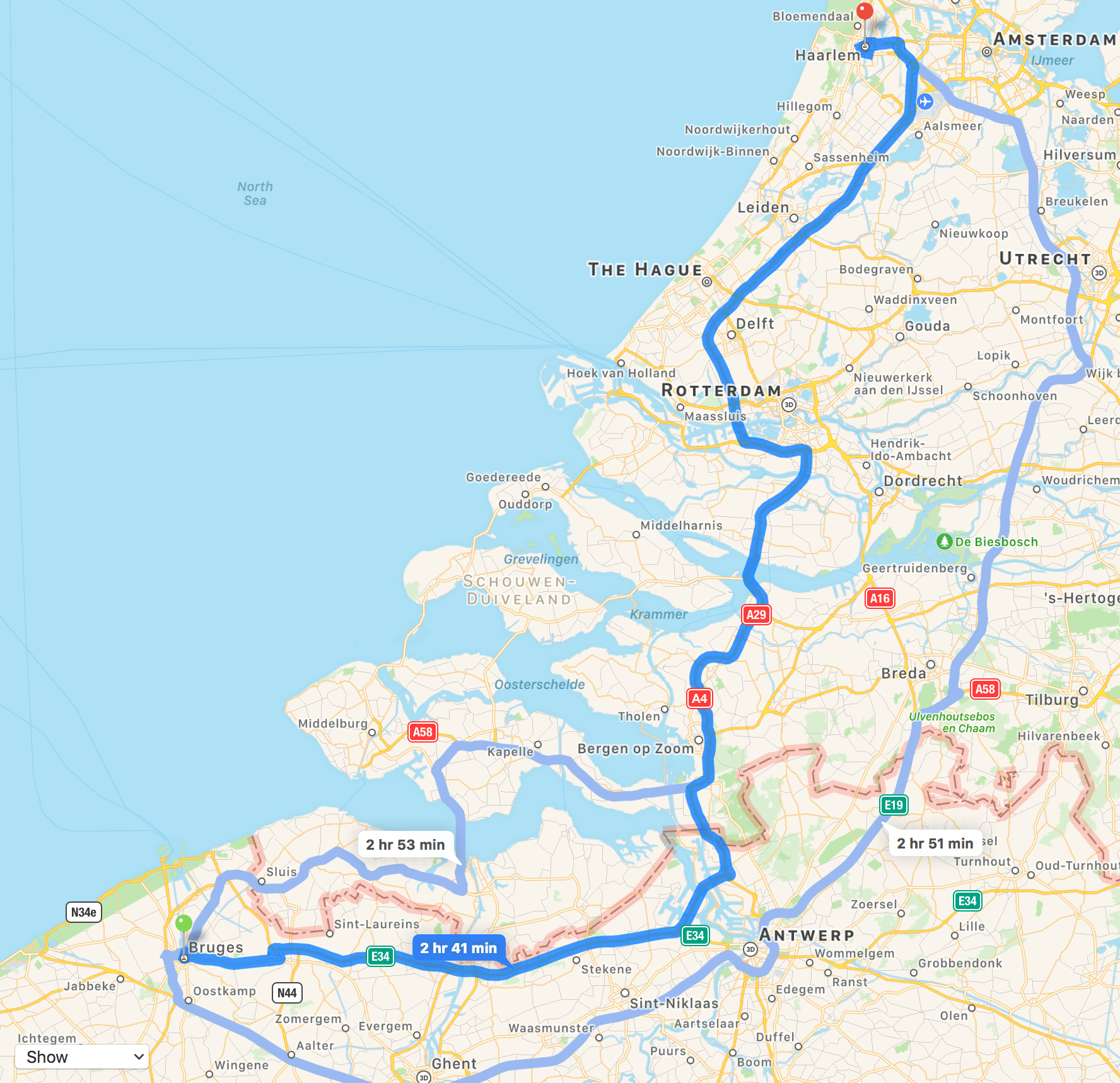 Haarlem is one of the most delightful towns I’ve ever stayed in. 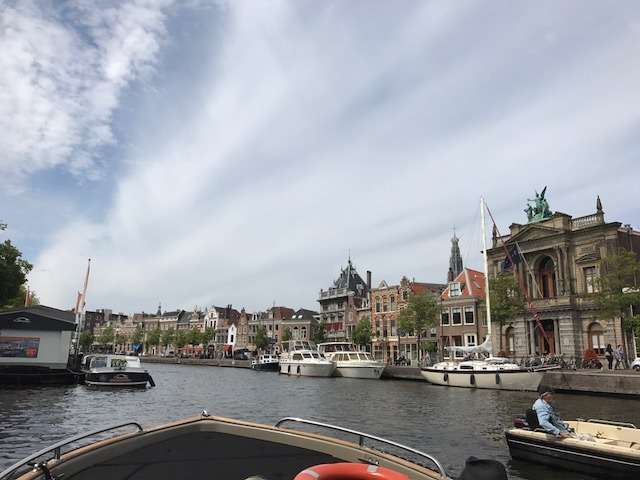 I was struck by  the beauty of its architecture, its canals and the happiness, height and friendliness of its inhabitants.
I was lucky enough to have a bike at my disposal. One day I set off randomly, and after 20 minutes of riding on delightfully demarcated bike lanes, I scrambled up a sand dune and looked out at the North Sea.
Just down the road was the  beach resort of Zandvoort, where one can enjoy sunbathing, surfing or a fine meal while gazing at a glorious sunset. 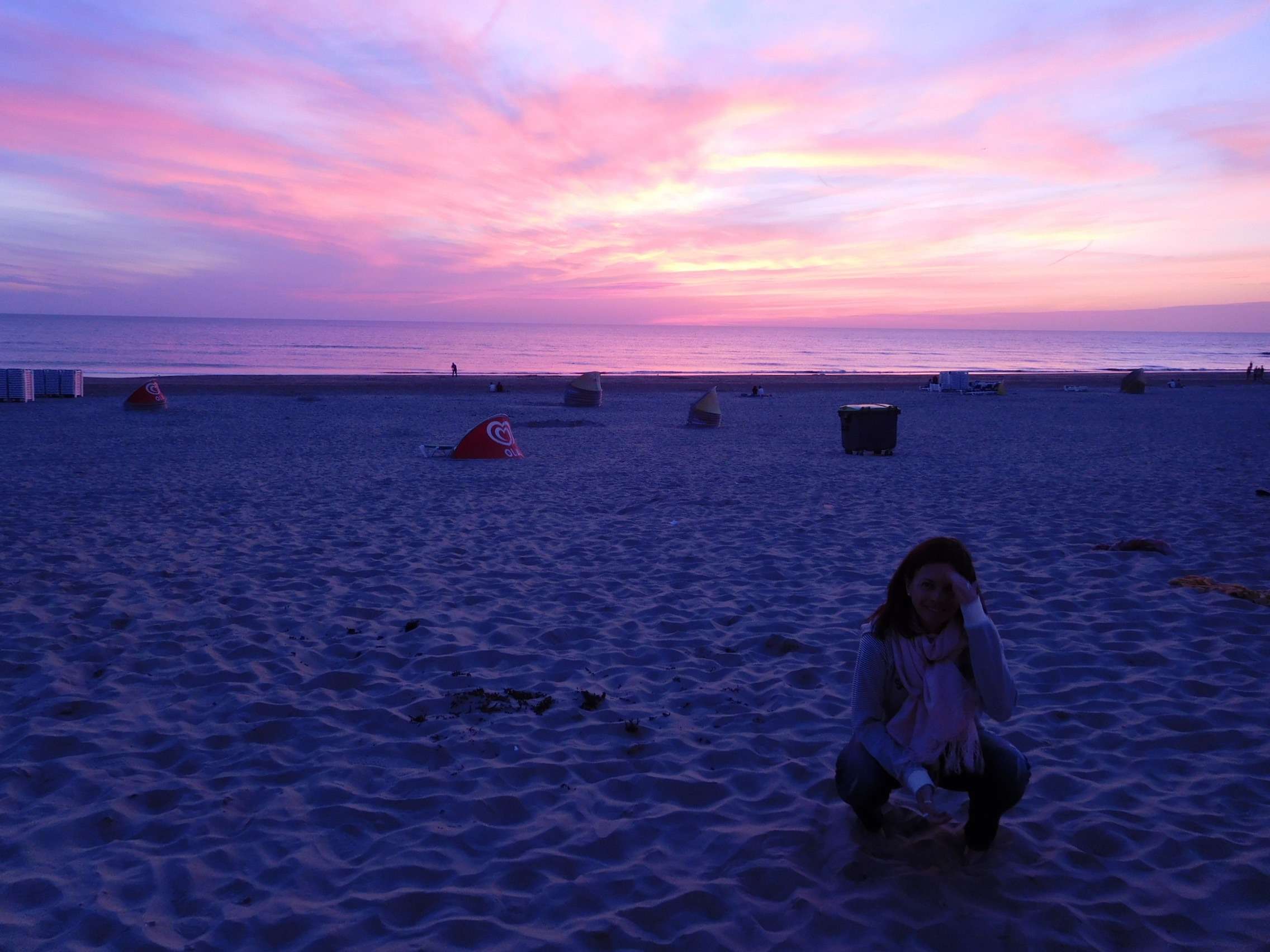 Like Amsterdam, which is a 15 minute train ride away, bikes and biking abound in Haarlem, but unlike Amsterdamers, the Haarlemers were universally engaging, polite and friendly. Everything and everyone seemed clean, well-organized, relaxed and pretty…and, well, …happy. 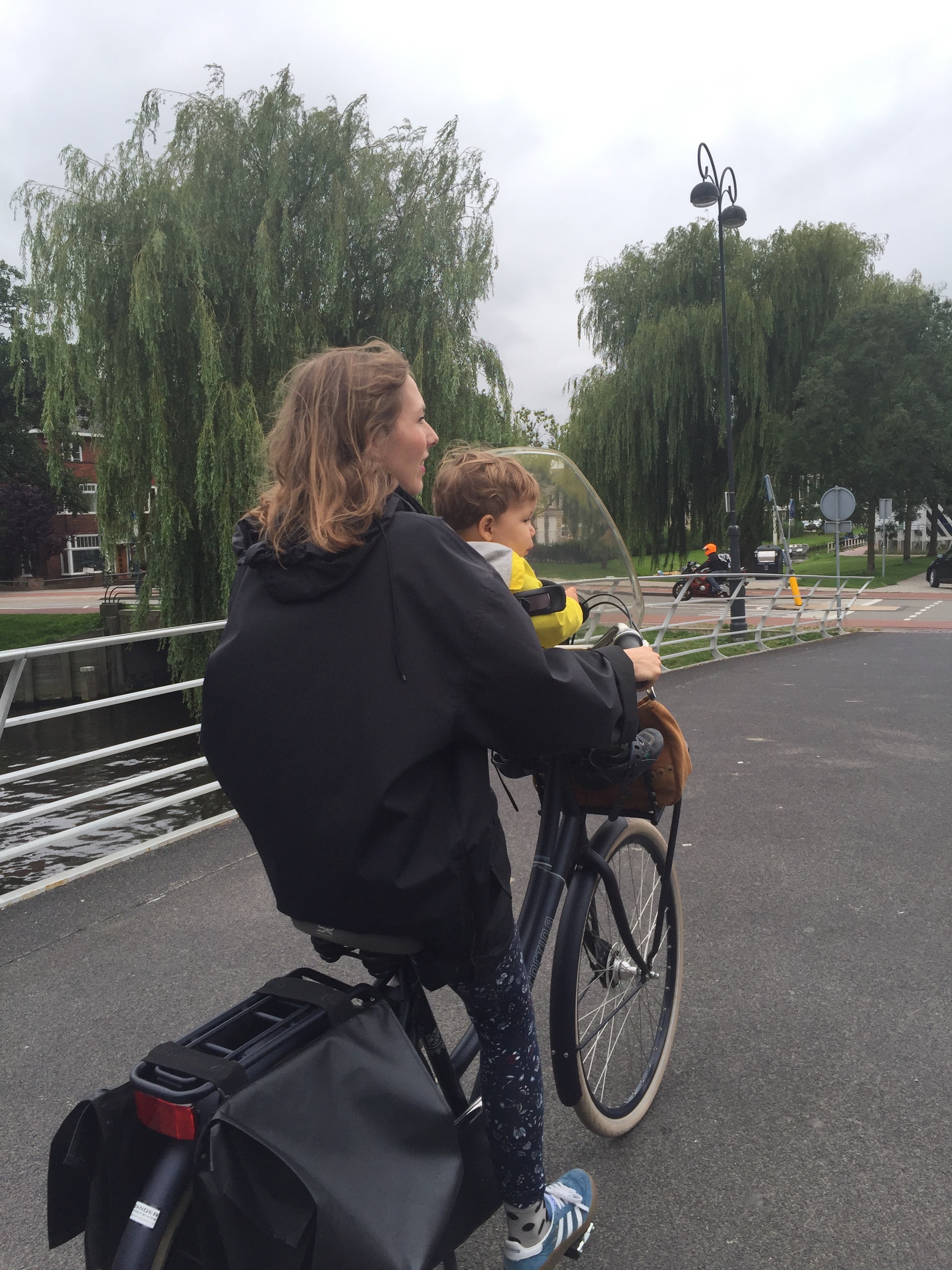 The World Happiness Report 2017, which ranks 155 countries by their happiness levels, was released in March of this year at the United Nations at an event celebrating The International Day of Happiness.
The report notes that:

Increasingly, happiness is considered to be the proper measure of social progress and the goal of public policy

Norway was at the top of the happiness list but

All of the other countries in the top ten also have high values in all six of the key variables used to explain happiness differences among countries and through time – income, healthy life expectancy, having someone to count on in times of trouble, generosity, freedom and trust, with the latter measured by the absence of corruption in business and government.

The top 4 were closely bunched with Finland in 5th place, followed by the Netherlands, Canada, New Zealand, and Australia and Sweden all tied for the 9th position.
Despite the immense wealth of Americans, the report notes:

The USA is a story of reduced happiness. In 2007 the USA ranked 3rd among the OECD countries; in 2016 it came 19th. The reasons are declining social support and increased corruption  and it is these same factors that explain why the Nordic countries do so much better.

Dutch children seem to be especially happy.
A UNICEF report from 2013 found that Dutch children were the happiest of the world’s 29 richest industrialized countries.  America ranked 26th, barely beating out Lithuania and Latvia.

Cardiovascular Disease in The Netherlands

Ischemic heart disease (IHD) deaths are due to blockages in the coronary arteries. Typically, this comes from the build up of atherosclerotic plaques in the arterial system and in most countries heart attacks from this process are the major cause of death.
The Netherlands has the third lowest rate of IHD deaths in developed countries, only slightly higher than France and less than half the rate of the USA. 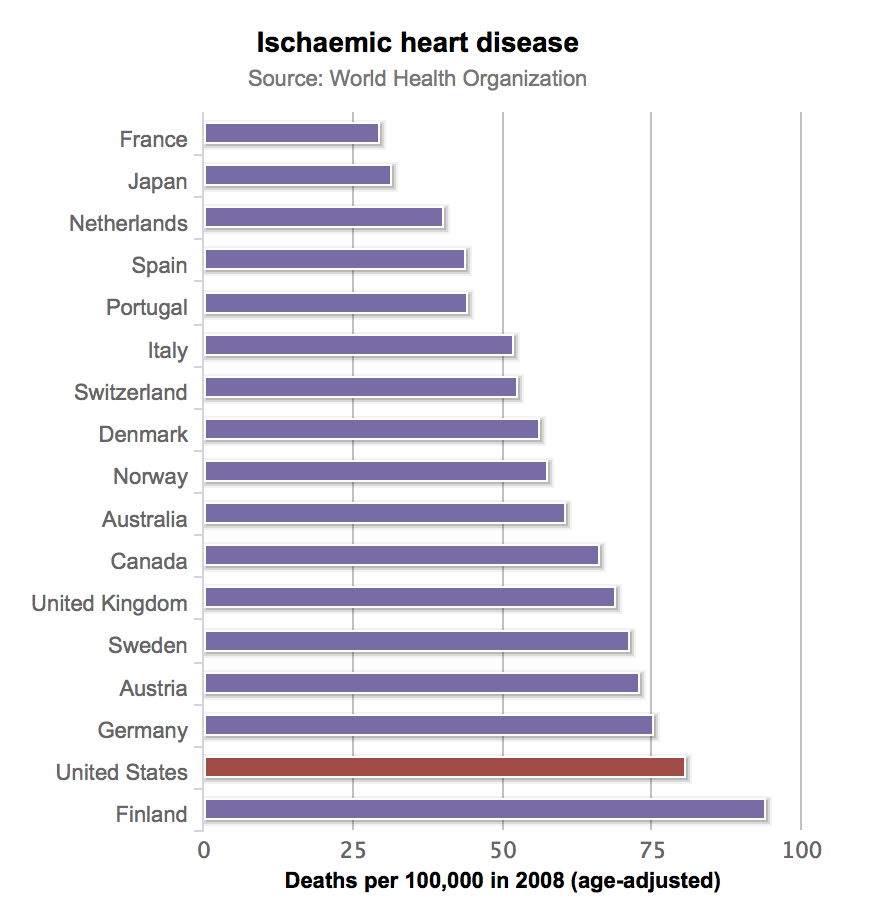 In all developed countries over the last thirty years we have seen a marked drop in deaths due to IHD. In The Netherlands it has dropped 70% and the rate in 2013 was nearly as low as France’s rate. 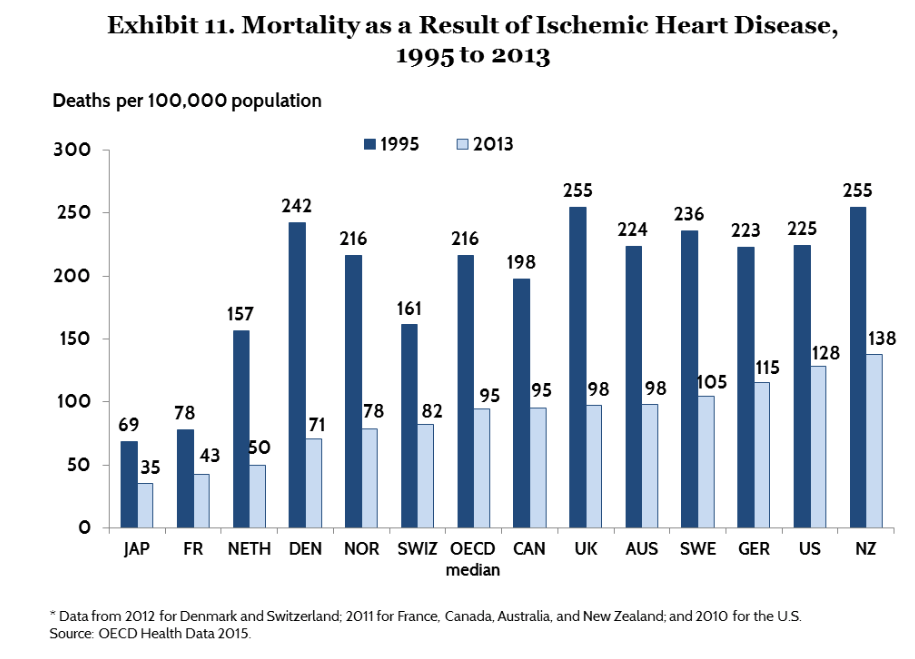 In addition, the Netherlands has a very low rate of deaths from  hypertensive heart disease. This table from 2008 shows that they are second only to Japan and their mortality rate is a third of that in the US. 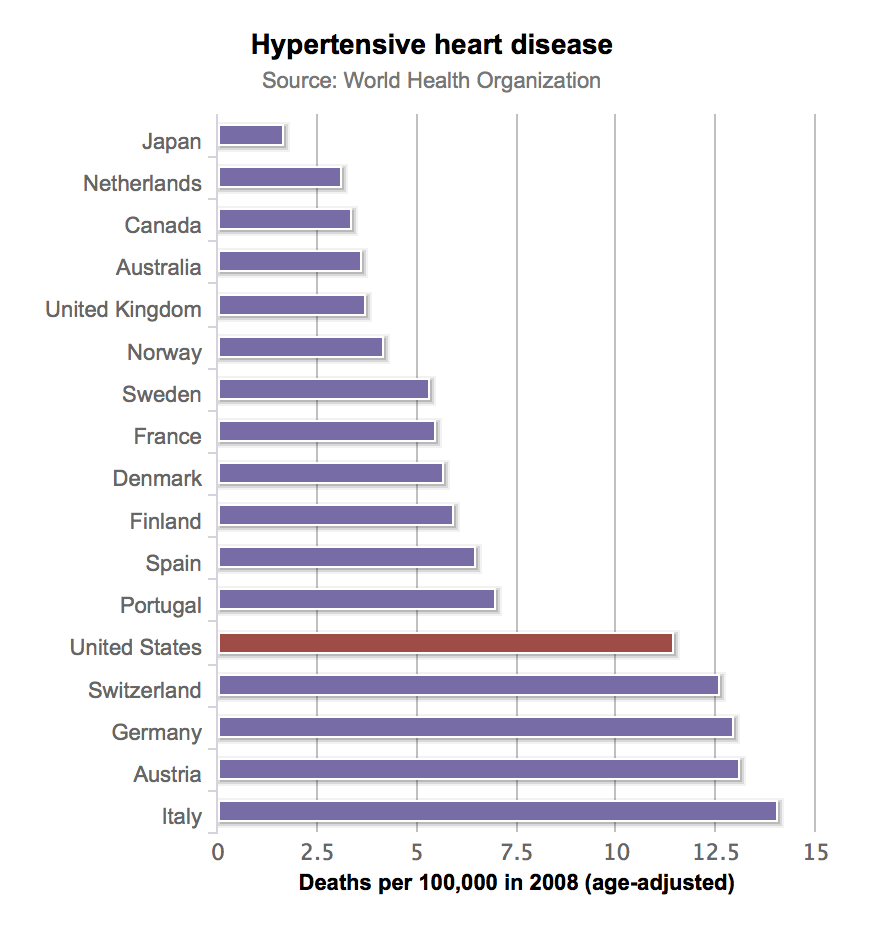 What factors could be causing all this happiness and heart healthiness?

We have been programmed to believe that heart attack rates are related to saturated fat in our diets.
The fact that the French consume lots of saturated fat and rank so low in IHD deaths has been called the French Paradox as it seems to contradict the expected association.
One thing is clear-the Dutch are not following a whole foods, plant-based diet. They are among the world leaders in consumption of both fat and sugar as the graph below indicates. 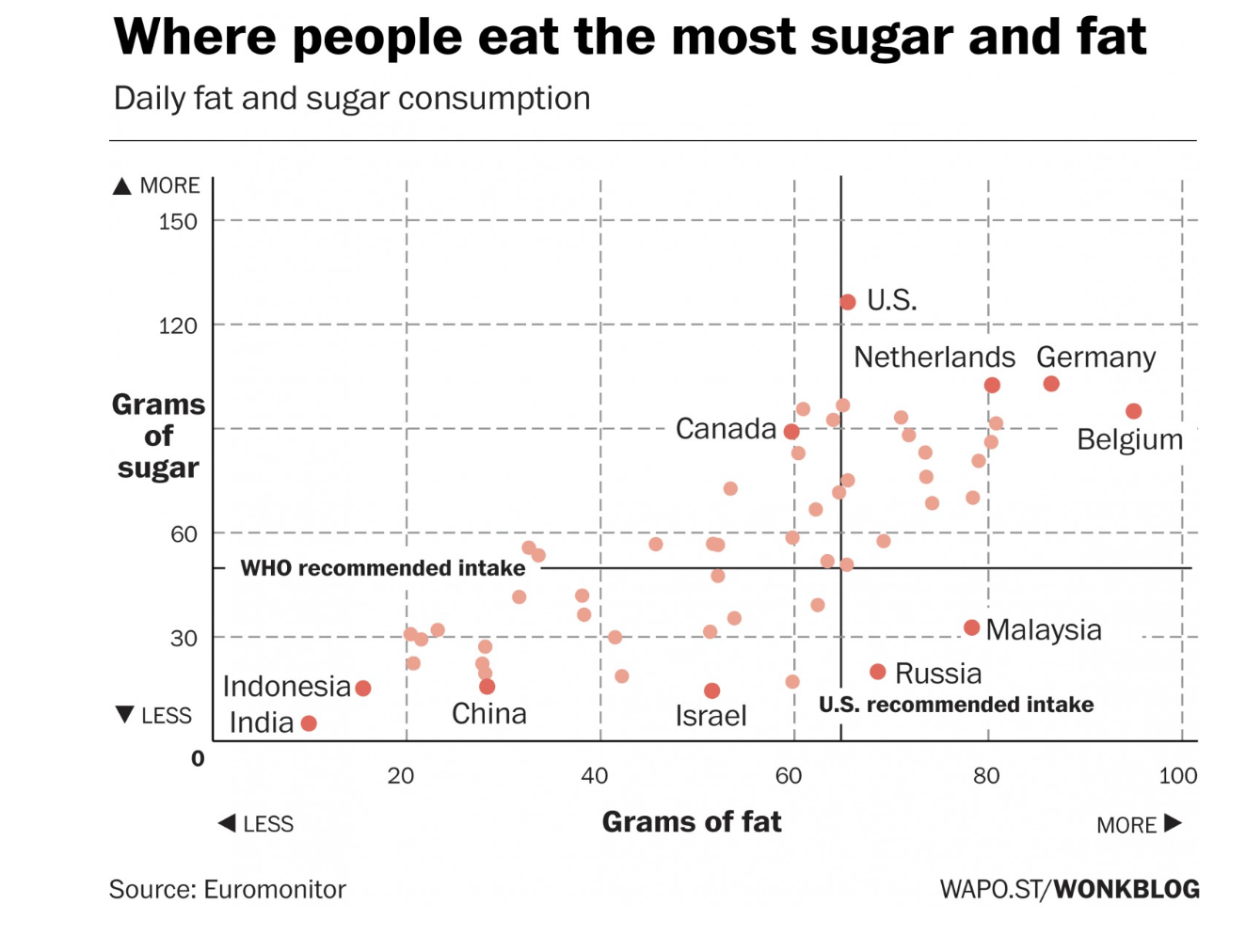 While in The Netherlands I sought out raw herring,  a dish which Rick Steves and others indicate is a Dutch obsession.
Since there is evidence that fish consumption, especially fatty ones like herring and mackerel, is associated with a lower risk of coronary heart disease, perhaps this was protecting the Dutch.
I didn’t see much herring consumption in Haarlem (a native Haarlemer informs me that the Dutch raw herring consumption might be confined to older generations or tourists).
It turns out that the Dutch aren’t meeting their own nutritional guidelines for healthy food .
The recommendation to eat fish at least twice a week, of which at least once fatty fish such as salmon, herring or mackerel, is followed by a mere 14 percent of the population. Less than 25% of them meet the recommended daily amount of fish, fruit, and vegetable consumption.


They do catch and export a lot of fish and shellfish and are in the top 10 of seafood exporting countries (99% of all those mussels consumed in Belgium come from The Netherlands).
And, to my great surprise, they eat lots of French, or as I have started calling them, Flanders fries. 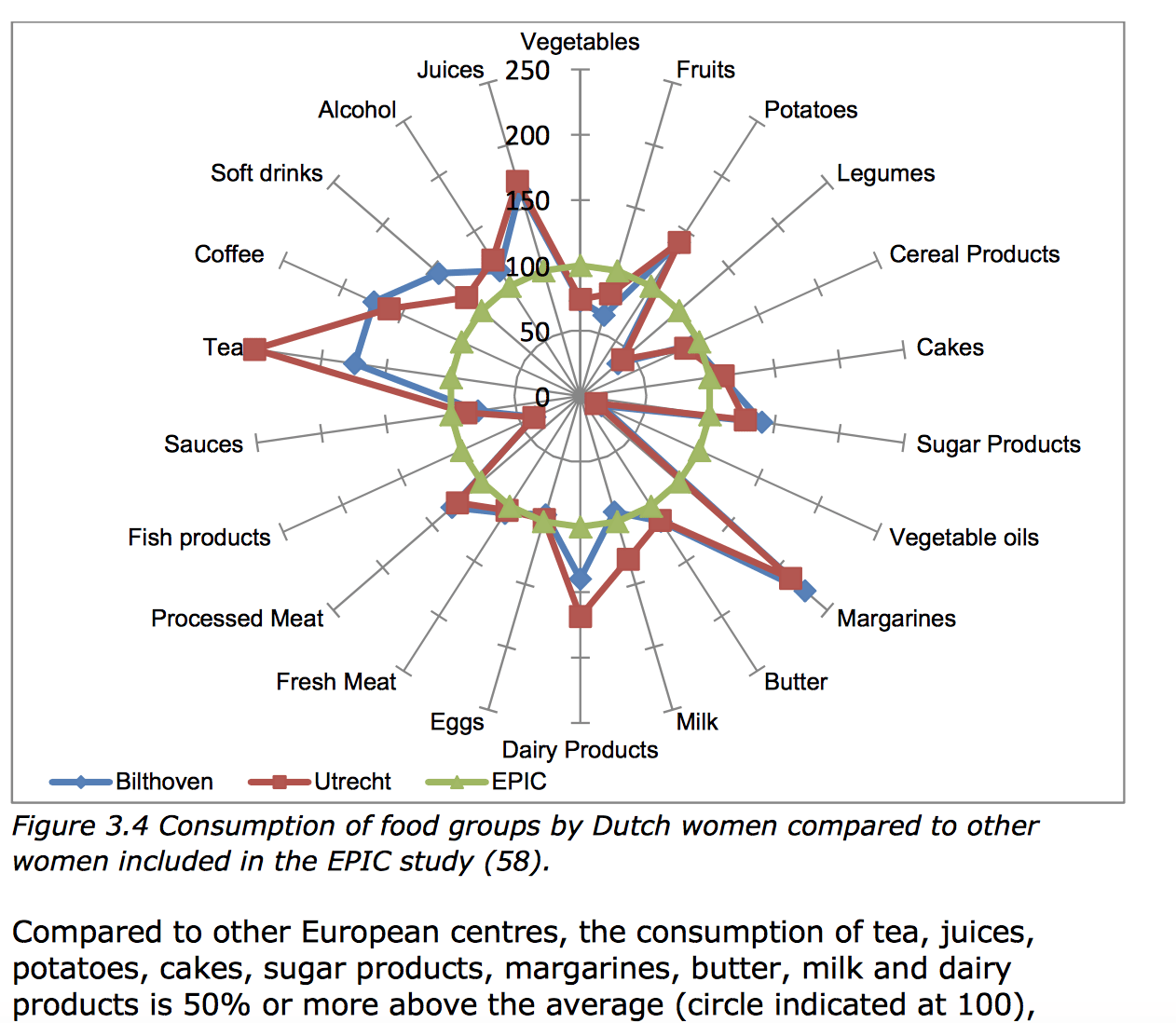 I personally witnessed  massive amounts of cheese and butter consumption.
In fact, the Dutch average 15% of calories from saturated fat, which is far above the 10% recommended by the Dietary Guidelines for Americans.
A recent analysis of Dutch fat consumption found:

The mean baseline intake of total saturated fatty acids (SFAs)  in the population was 15.0% of energy. More than 97% of the population exceeded the upper intake limit of 10% of energy/d as recommended by the Health Council of the Netherlands.

Data shows that  the Dutch are eating lots of saturated fat from dairy and meat, but it appears to be lowering their risk for heart attacks
Yes, despite 40 years of high saturated fat consumption, the Dutch have seen a 70% drop in mortality from heart attacks. Their rate of dying from ischemic heart disease is lower than the US and only slightly higher than the French.
Thus, rather than talk about a French paradox, we should be talking about the Dutch paradox.

For the French paradox many theories, both fanciful and serious,  have been proposed
The one most laypeople remember (due to a 60 Minutes episode in 1991) is that the French are protected by their high red wine consumption. Although this theory proved a great boon to the red wine industry (sales rose 40% the year after Morley Safer made his presentation on 60 Minutes), it has never had any serious scientific credibility.  Current thinking is that all forms of alcohol in moderation are equally protective.
Others have proposed garlic or onion or faux gras consumption. My own theory for the French is that it is fine cheese and chocolate consumption that protects them.
In subsequent posts I’ll lay out the evidence for my startling new theory to explain the Dutch paradox.

13 thoughts on “Why Are The Dutch So Heart Healthy and Happy (And Tall)? Part I: Is It Their Diet?”