A friend recently sent the skeptical cardiologist  a link to a very disappointing NY Times article  entitled “The Case For A Breakfast Feast”
The writer, Roni Rabin (who has a degree in journalism from Columbia University)  struggles to support her sense that there is a “growing body of research” suggesting we should all modify our current dietary habits in order to eat a  breakfast and make breakfast the largest meal of the day.

Many of us grab coffee and a quick bite in the morning and eat more as the day goes on, with a medium-size lunch and the largest meal of the day in the evening. But a growing body of research on weight and health suggests we may be doing it all backward.

Rabin’s first  discussion is of an observational study of Seventh Day Adventists published in July which adds nothing to the evidence in this area because (as she points out):

The conclusions were limited, since the study was observational and involved members of a religious group who are unusually healthy, do not smoke, tend to abstain from alcohol and eat less meat than the general population (half in the study were vegetarian)

She then discusses experiments on mice from 2012 with a Dr. Panda, a short term feeding trial in women from 2013 and studies on feeding and circadian rhythm in a transgenic rat model from 2001.
There is nothing of significance in the NY Times piece that changes my previous analysis  that it is perfectly safe to skip breakfast and that it will neither make you obese nor give you heart disease.

In what follows I’ll repost my initial post on breakfast (Breakfast is Not The Most important Meal of the Day: Feel Free to Skip it) followed by a follow up post (Feel Free To Skip Breakfast Again) I wrote in 2015.
Finally, I’ll take a close look at a statment from the American Heart Association  from earlier this year which Rabin quotes and which many news outlets somehow interpreted as supporting the necessity of eating breakfast for heart health when, in fact, it confirmed the lack of science behind the recommendation.

It always irritates me when a friend tells me that I should eat breakfast because it is “the most important meal of the day”. Many in the nutritional mainstream have propagated this concept along with the idea that skipping breakfast contributes to obesity. The mechanism proposed seems to be that when you skip breakfast you end up over eating later in the day because you are hungrier.
The skeptical cardiologist is puzzled.
Why would i eat breakfast if I am not hungry in order to lose weight?
What constitutes breakfast?
Is it the first meal you eat after sleeping? If so, wouldn’t any meal eaten after sleeping qualify even it is eaten in the afternoon?
Is eating a donut first thing in the morning really healthier than eating nothing?
Why would your first meal be more important than the last?
Isn’t it the content of what we eat that is important more than the timing?
The 2010 dietary guidelines state

A recent study anayzes the data in support of the “proposed effect of breakfast on obesity” (PEBO) and found them lacking.
This is a fascinating paper that analyzes how scientific studies which are inconclusive can be subsequently distorted or spun by biased researchers to support their positions. It has relevance to how we should view all observational studies.
Observational studies abound in the world of nutritional research. The early studies by Ancel Keys establishing a relationship between fat consumption and heart disease are a classic example. These studies cannot establish causality. For example, we know that countries that consume large amounts of chocolate per capita have large numbers of Nobel Prize winners per capitaChocolate Consumption and Nobel Laureates
Common sense tells us that it is not the chocolate consumption causing the Nobel prizes or vice versa but likely some other factor or factors that is not measured.
Most of the studies on PEBO are observational studies and the few, small prospective randomized studies don’t clearly support the hypothesis.
Could the emphasis on eating breakfast come from the “breakfast food industry”?
I’m sure General Mills and Kellogg’s would sell a lot less of their highly-processed, sugar-laden breakfast cereals if people didn’t think that breakfast was the most important meal of the day.
My advice to overweight or obese patients:
-Eat when you’re hungry. Skip breakfast if you want.
-If you want to eat breakfast, feel free to eat eggs or full-fat dairy (including butter)
-These foods are nutrient-dense and do not increase your risk of heart disease, even if you have high cholesterol.
-You will be less hungry and can eat less throughout the day than if you were eating sugar-laden, highly processed food-like substances.

The “must eat breakfast” dogma reminds me of a quote  from Melanie Warner’s excellent analysis of the food industry, “Pandora’s Lunchbox.”

“Walk down a cereal aisle today or go onto a brand’s Web site, and you will quickly learn that breakfast cereal is one of the healthiest ways to start the day, chock full of nutrients and containing minimal fat. “Made with wholesome grains,” says Kellogg’s on its Web site. “Kellogg’s cereals help your family start the morning with energy by delivering a number of vital, take-on-the-day nutrients—nutrients that many of us, especially children, otherwise might miss.” It sounds fantastic. But what you don’t often hear is that most of these “take-on-the-day” nutrients are synthetic versions added to the product, often sprayed on after processing. It’s nearly impossible to find a box of cereal in the supermarket that doesn’t have an alphabet soup of manufactured vitamins and minerals, unless you’re in the natural section, where about half the boxes are fortified.”

The Kellogg’s and General Mills of the world strongly promoted the concept that you shouldn’t skip breakfast because they had developed products that stayed fresh on shelves for incredibly long periods of time. They could be mixed with easily accessible (low-fat, no doubt) milk to create inexpensive,  very quickly and easily made, ostensibly healthy breakfasts.
Unfortunately, the processing required to make these cereals last forever involved removing the healthy components.
As Warner writes about W.K. Kellogg:

“In 1905, he changed the Corn Flakes recipe in a critical way, eliminating the problematic corn germ, as well as the bran. He used only the starchy center, what he referred to as “the sweetheart of the corn,” personified on boxes by a farm girl clutching a freshly picked sheaf. This served to lengthen significantly the amount of time Corn Flakes could sit in warehouses or on grocers’ shelves but compromised the vitamins housed in the germ and the fiber residing in the bran”

This is a very familiar story in the world of food processing;  Warner covers, nicely, the same processes occurring with cheese and with milk, among other things.

I pick on the American heart Association (AHA) a lot in this blog but the AHA scientific statement on “Meal Timing and Frequency: Implications for Cardiovascular Disease Prevention” published earlier this year in Circulation is for the most part a balanced summary of research in the field.
Unfortunately, the media grossly distorted the statement and we ended up with assertive headlines such as this one from Reuters:
Eating Breakfast and Eating Mindfully May Help The Heart
Reuters went on to say (red added by me for emphasis):

“Planning meals and snacks in advance and eating breakfast every day may help lower the risk of cardiovascular disease, new guidelines from U.S. doctors say.”

however, the AHA statement says nothing close to that.
This is the summary that was actually in the AHA paper:

“In summary, the limited evidence of breakfast consumption as an important factor in combined weight and cardiometabolic risk management is suggestive of a minimal impact. There is increasing evidence that advice related to breakfast consumption does not improve weight loss, likely because of compensatory behaviors during the day. …… Additional, longer-term studies are needed in this field because most metabolic studies have been either single-day studies or of very short duration”

“We know from population studies that eating breakfast is related to lower weight and healthier diet, along with lower risk of cardiovascular disease,” .
“However, interventions to increase breakfast consumption in those who typically skip breakfast do not support a strong causal role of this meal for weight management, in particular,” St-Onge cautioned. “Adding breakfast, for some, leads to an additional meal and weight gain.”
“The evidence, St-Onge said, is just not clear enough to make specific recommendations on breakfast.”

Health New Review published a  nice summary of news reports on the AHA statement with a discussion on the overall problem of making broad public policy dietary recommendations from very weak evidence.

New York Times Gets It Right

The New York Times does have writers who can put together good articles on health. One of them, Aaron Carroll wrote a piece in 2016 entitled “Sorry, There’s Nothing Magical About Breakfast” which does a great job of sorting through weak evidence in the field.
Carroll is a professor of pediatrics at Indiana University School of Medicine and writes excellent articles on The New Health Care blog for the Times.
His conclusions are identical to mine from 2013:

“The bottom line is that the evidence of breakfast is something of a mess. If you’re hungry, eat it. But don’t feel bad if you’d rather skip, and don’t listen to those who lecture you. Breakfast has no mystical powers.”

If you read the AHA statement completely you come across a lot of mumbo-jumbo on intermittent fasting, meal frequency and “mindful” eating.  The abstract’s last sentence is

Intentional eating with mindful attention to the timing and frequency of eating occasions could lead to healthier lifestyle and cardiometabolic risk factor management.

and they reference this table: 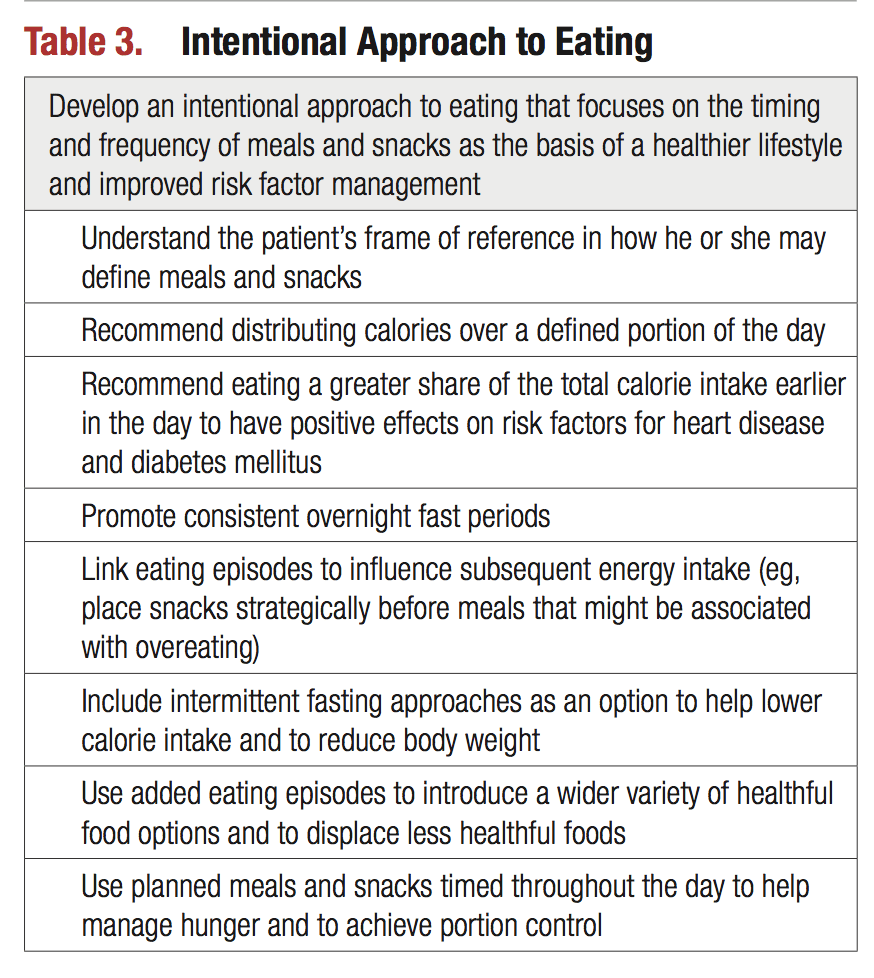 Yikes! I have no idea what they are talking about.
For those of us who need to get to work early in the morning, breakfast is likely to be the worst time for “mindful” eating.
I have a cup of coffee first thing upon arising and only eat much later in the day when I feel very hungry.
Dinner, on the other hand we can plan for, prepare with loved ones and consume  in  a very mindful and leisurely fashion with a glass of heart healthy wine or beer while enjoying good conversation.

So, ignore what apparently authoritative sources like the New York Times, Reuters, and  the AHA tell you about eating breakfast like a king, lunch like a prince, and dinner like a pauper, mindfully or otherwise.
After all, in the Middle Ages, kings likely didn’t eat breakfast as the Catholic church frowned on it. Per Wikipedia: 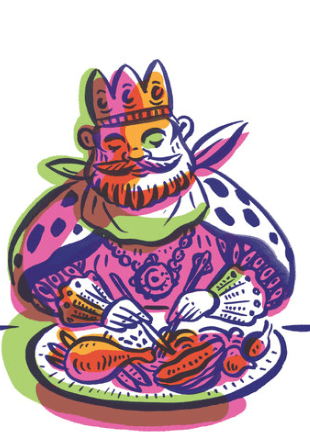 Breakfast was under Catholic theological criticism. The influential 13th-century Dominican priest Thomas Aquinas wrote in his Summa Theologica (1265–1274) that breakfast committed “praepropere,” or the sin of eating too soon, which was associated with gluttony.[2]Overindulgences and gluttony were frowned upon and were considered boorish by the Catholic Church, as they presumed that if one ate breakfast, it was because one had other lusty appetites as well, such as ale or wine.

Gluttonously Yours,
-ACP
Image of king and pauper eating from the New York Times article created by Natalya Balnova.