How Much Does or Should An Echocardiogram Cost?

One might assume the skeptical cardiologist has a quick and accurate answer to this question given that he has spent a very large amount of his career either researching, teaching or interpreting echocardiograms.
Surprisingly, however, it turns out to be extremely difficult to come up with a good response.
An echocardiogram is an ultrasound test that tells us very precisely what is going on with the heart muscle and valves. I’ve written previously here and here on how important they are in cardiology, and how they can be botched.
As in the  example of a severely leaking aortic valve  below, we get information on the structure of the heart (in grey scale) and   on  blood flow (color Doppler). This type of information is invaluable in assessing cardiac patients.

In the last week I’ve had 2 patients call the office indicating that even with insurance coverage, their out of pocket costs for an echocardiogram were unacceptably high – almost a thousand dollars.

Wide Variations In Equipment, Recording and Interpretation Expertise For Echocardiograms

A small, handheld ultrasound machine that performs the basics of echocardiography can now be purchased for 5 to 10K. More sophisticated systems with more elaborate capabilities cost up to 200K. In my echo lab the machines are typically replaced about every 5 years, but in smaller, more cost sensitive labs they can be used for decades.
An echo test typically takes up to an hour, and a sonographer performs up to 8-10 tests per day. At facilities trying to maximize profit, tests are shortened and sonographers might perform 20 per day.
In the U.S., echos are performed by sonographers who have trained for several years (specifically in the field of ultrasound evaluation of the heart) and earn on average around 30$ per hour, however, Medicare and third party payors usually don’t require any sonographer certification for echo reimbursement.
Physicians who read echocardiograms vary from having rudimentary training to having spent years of extra training in echocardiography, and gaining board certification documenting their expertise.
Interpretation of a normal echocardiogram takes less than 10 minutes, whereas a complicated valvular or congenital examination requiring comparison to previous studies, review of clinical records and other imaging modalities, could take more than an hour.
Given these wide parameters, estimating what one should charge for the technical or physician portions of the average echo is challenging.

Elizabeth Rosental wrote an excellent piece for the NY Times in 2014 in which she described the striking discrepancy between 2 echos a man underwent at 2 different locations:

Len Charlap, a retired math professor, has had two outpatient echocardiograms in the past three years that scanned the valves of his heart. The first, performed by a technician at a community hospital near his home here in central New Jersey, lasted less than 30 minutes. The next, at a premier academic medical center in Boston, took three times as long and involved a cardiologist.

And yet, when he saw the charges, the numbers seemed backward: The community hospital had charged about $5,500, while the Harvard teaching hospital had billed $1,400 for the much more elaborate test. “Why would that be?” Mr. Charlap asked. “It really bothered me.”

Testing has become to the United States’ medical system what liquor is to the hospitality industry: a profit center with large and often arbitrary markups”

This graph shows the marked variation across the US in price of an echo.  In all the examples, however, what the hospitals were paid was around 400$ which is the amount that CMS pays for the complete echo CPT code 93306. 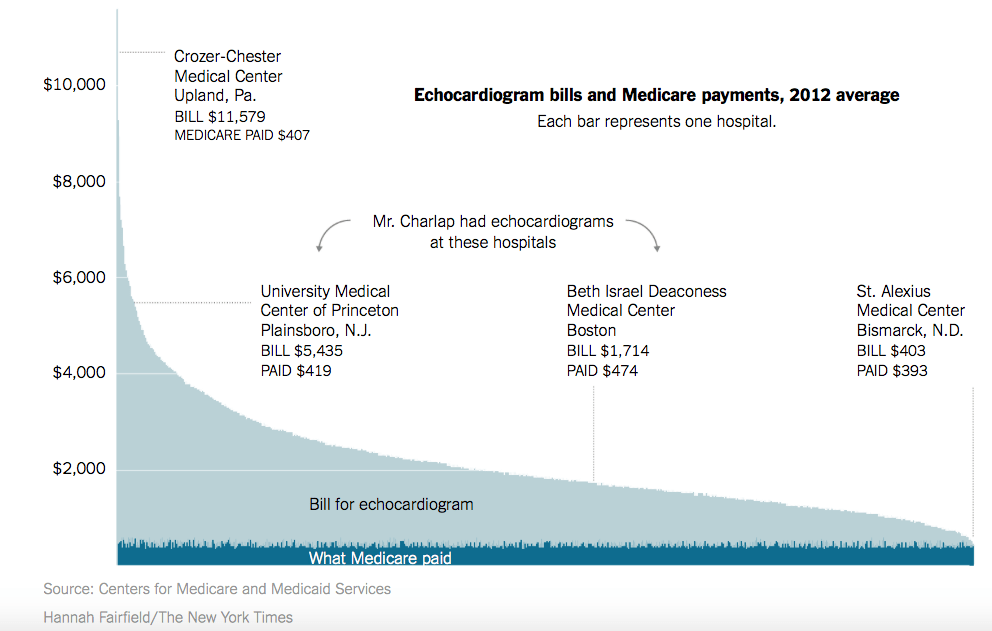 Costs Outside the US

At the Primus Super Specialty Hospital in New Delhi, India, apparently you can get an echocardiogram for $50.
This site looks at prices for private echos across the UK. The cheapest is in Bridgend in Wales (where suicide is rampant) at 175 pounds. You can get an echo for 300 pounds at the Orwell clinic (where their motto is “War is peace. Freedom is slavery. Ignorance is strength.”)
At one private  UK clinic, you can have your echo read by Dr. Antoinette Kenny, who appears extremely well qualified  for the task.

“In 1993, at the relatively young age of 33, she was appointed Consultant Cardiologist and Clinical Head of Echocardiography at The Regional Cardiothoracic Centre, Freeman Hospital, Newcastle upon Tyne.  At that time only 19 (<5%) of consultant cardiologists in the UK were female and an even smaller percentage of cardiologists had achieved consultant status by the age of 33, facts which serve to highlight Dr. Kenny’s postgraduate career achievements.”

Whereas I would not be interested in getting an echo done in India or Mexico, I would definitely have one done in Dr. Kenny’s center if I lived nearby.

My hospital, like most, will write off the costs of an echo for indigent patients. I will read the tests on such patients pro bono (although doctors never use that term because we feel it makes us sound to lawyeresque).
The hospital also has a price it charges for those patients who are not indigent, but who have excessively high deductibles or co-pays with their insurance. In some cases this “self-pay” charge is significantly less than what the patient would pay with their insurance.
Paying out of the pocket for the echocardiogram may also make sense if the patient and/or physician really thinks the test is warranted, but the patient’s insurance deems it unncessary.
If you find yourself in a situation where a needed echocardiogram performed at your ordering doctor’s preferred facility is prohibitively high, it makes sense to look around for a more affordable option.
However, I must advise readers to be very cautious. In the NY Times example, the hospital charges for Mr. Charlap seemed inversely proportional to the quality of the echo he received.
This is not necessarily the case for a self pay echo. It is more likely that a cheap upfront out-of-pocket cost quote in a doctor’s office or a screening company reflects cheap equipment with minimal commitment to quality and brevity of exam and interpretation time.
I have encountered numerous examples of this in my own practice.
One of my patients who has undergone surgical repair of her mitral valve decided to get an echocardiogram as part of a LifeLine screening (see here and here for all the downsides of such screenings).
The report failed to note that my patient had a bicuspid aortic valve and an enlarged thoracic aorta.  These are extremely significant findings with potentially life threatening implications if missed.
If a high quality echo recording and interpretation is indicated for you make sure that the equipment, technician and physician reader involved in your case are up to the task.
Ultrasonically Yours,
-ACP

29 thoughts on “How Much Does or Should An Echocardiogram Cost?”