Is Chocolate Good For The Heart?

While in Paris recently,  allegedly researching the French Paradox, the skeptical cardiologist and his Eternal Fiancee’ participated in a Food Tour (Paris By Mouth).  Along with 2 other American couples, we were guided and educated by a Parisian food/wine expert as we wandered from one small shop to another in the St. Germain district of the Left Bank.
We collected the perfect Baguette Monge from Eric Kayser, delicious rillettes, terrine, and saucisson from Charcuterie Saint Germain, amazing cheese from Fromager Laurent Dubois, delightful  pastries from Un Dimanche a Paris, and unique and delicious chocolate from Patrick Roger.
The tour ended at La Cave du Senat wine shop, where we descended into a stone cellar and tasted all of the delicious foods while drinking wonderful wines.
The French Paradox refers to the fact that the French are among the world’s highest consumers of saturated fat, but have among the world’s lowest rates of cardiovascular disease. For those nutritional experts still obsessed with the dangers of all saturated fats, this poses a conundrum.

Cheese And The French Paradox

France consumes more cheese (27 kg per person per year) than any other country in the world (the US only consumes 16 kg per capita). Unlike Americans who have embraced low fat or skim versions of cheese, the French predominantly consume full fat cheese.

I wrote In Defense of Real Cheese  in 2014 and extolled the heart-healthy virtues of eating full fat , non factory-processed cheese.
Perhaps the French are protected against heart disease by their high consumption and love of real cheese ?

Chocolate And The French Paradox

Whereas cheese contains saturated fat and has been unfairly stigmatized as unhealthy, chocolate, similarly with high saturated fat content, seems to have been coronated as the king of food that is yummy but paradoxically is also heart healthy.
Could chocolate be the enigmatic protector of the hearts of the French?
Back on Boulevard Saint-Germain we entered the shop of Patrick Roger, who won the coveted Meilleur Ouvrier de France, in the craft 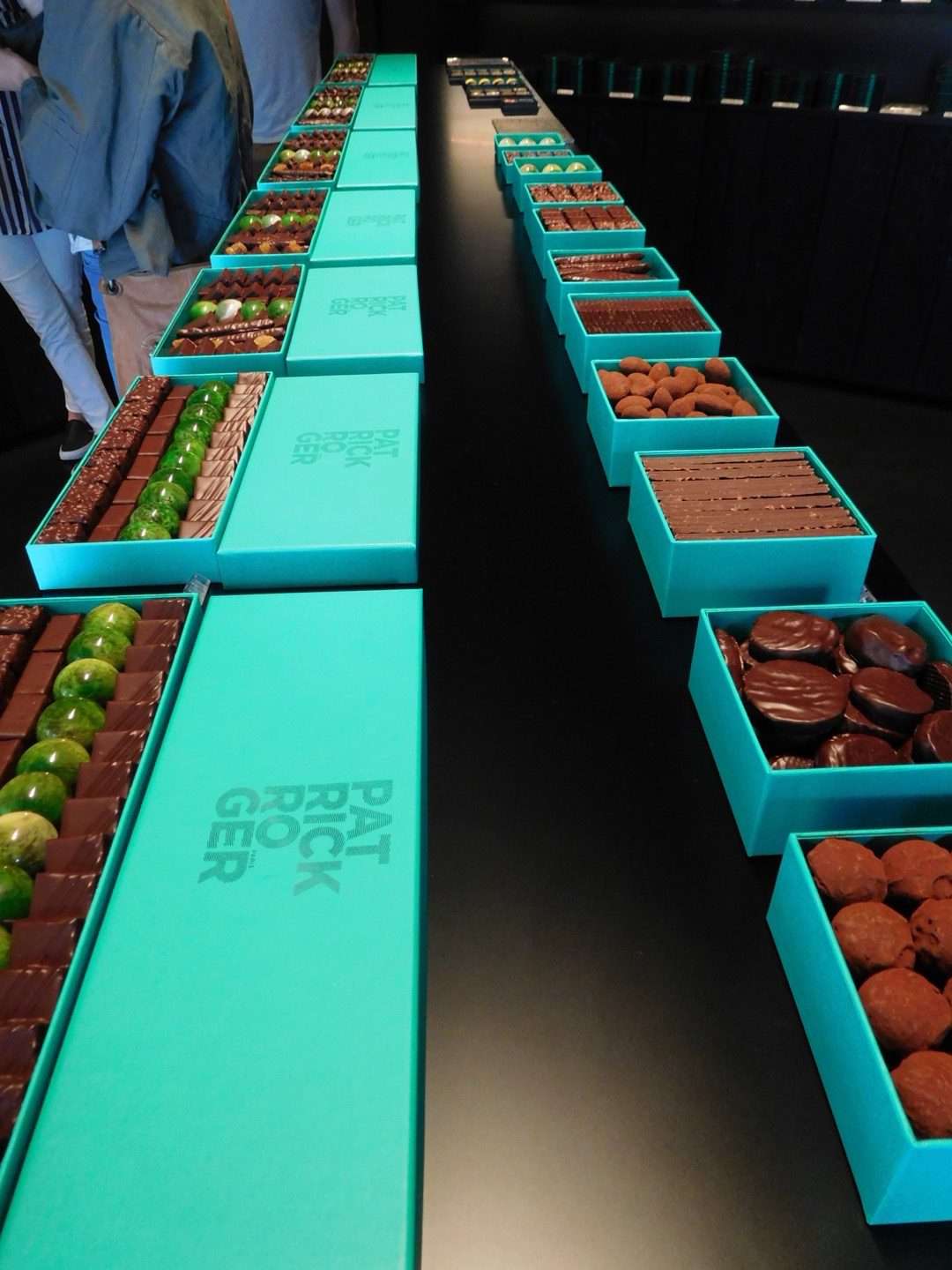 of chocolate in 2000. The MOF is France’s way of recognizing the best artisans in various fields and occurs every 4 years. The standards are so high that in 2015 none of the 9 chocolatier competitors were felt to merit receiving the award.
The French clearly take their chocolate seriously but they don’t top the international charts at per capita consumption.
The Swiss consume 20 pounds of chocolate per year, whereas the French and US are tied for 9th, consuming 9.3 and 9.5 lbs. (Infographic from Forbes 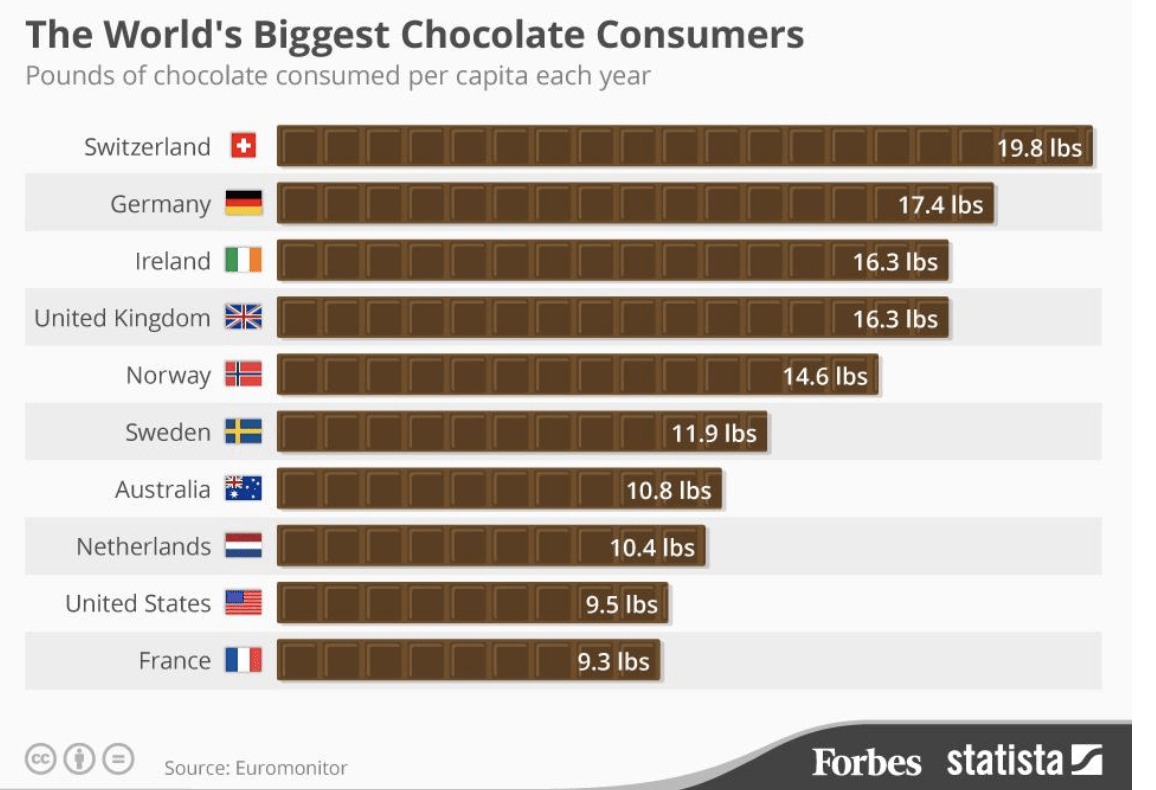 Chocolate And The Heart

I’ve been meaning to write a post on chocolate and the heart since my encounter with high end chocolatiers in Paris and Bruges, and especially since May when there was much fanfare over a Danish study showing less atrial fbrillation in high chocolate consumers.
A NYTimes piece stimulated by the Danish study and entitled “Why Chocolate May Be Good For The Heart” typified the media headlines  and summarized the study thusly:

Scientists tracked diet and health in 55,502 men and women ages 50 to 64. They used a well-validated 192-item food-frequency questionnaire to determine chocolate consumption.

Previous large, well done observational studies also show that high chocolate consumption compared to no consumption is associated with a lower risk of cardiovascular disease.
Of course these being observational studies with only weak (but significant) associations, we cannot conclude that chocolate consumption actually  lowers the risk of developing afib or cardiovascular disease (causation.)
My favorite graph to hammer home this point is below and plots how much each country consumes in chocolate, versus the number of nobel laureates. 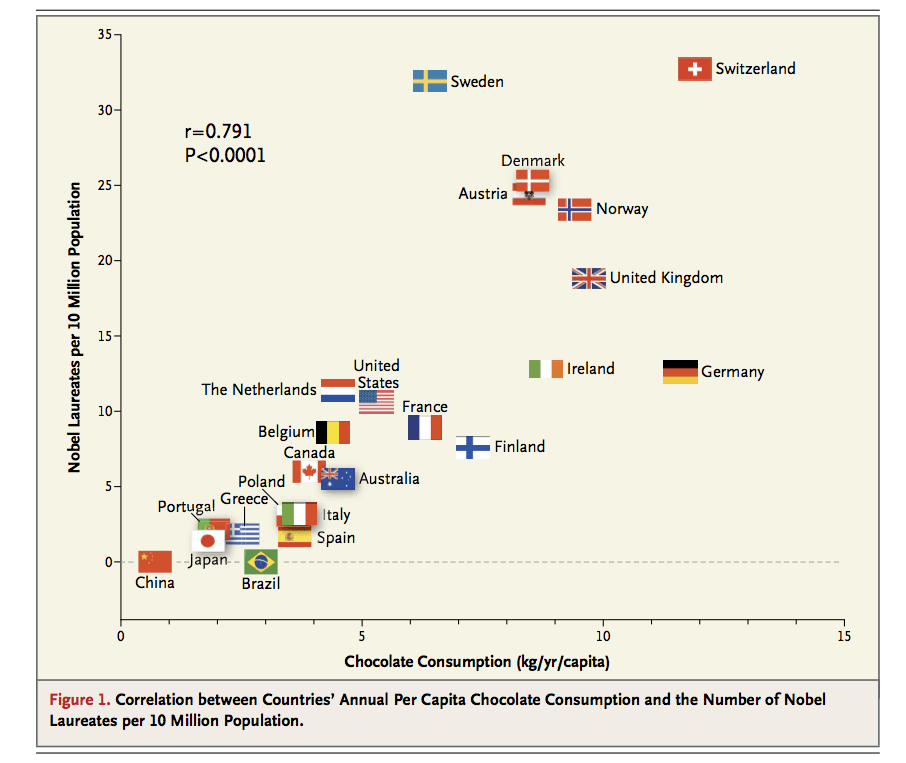 There is a good correlation here (Pearson’s (no relation unfortunately) correlation coefficient or r value) which is highly significant (p value <.0001). But does anyone seriously think a country can boost its Nobel Laureate production by promoting chocolate consumption?
The authors of the Danish afib trial, admit the possibility of residual or unmeasured confounding variables as a limitation in their discussion:

Although we had extensive data on diet, lifestyle and comorbidities, we cannot preclude the possibility of residual or unmeasured confounding. For instance, data were not available on renal disease and sleep apnoea. However, after adjusting for age, smoking status and other potential confounders, the association was somewhat attenuated but remained statistically significant.

Most chocolate authorities proclaim the health  benefits of dark chocolate over milk chocolate but in this Danish study: 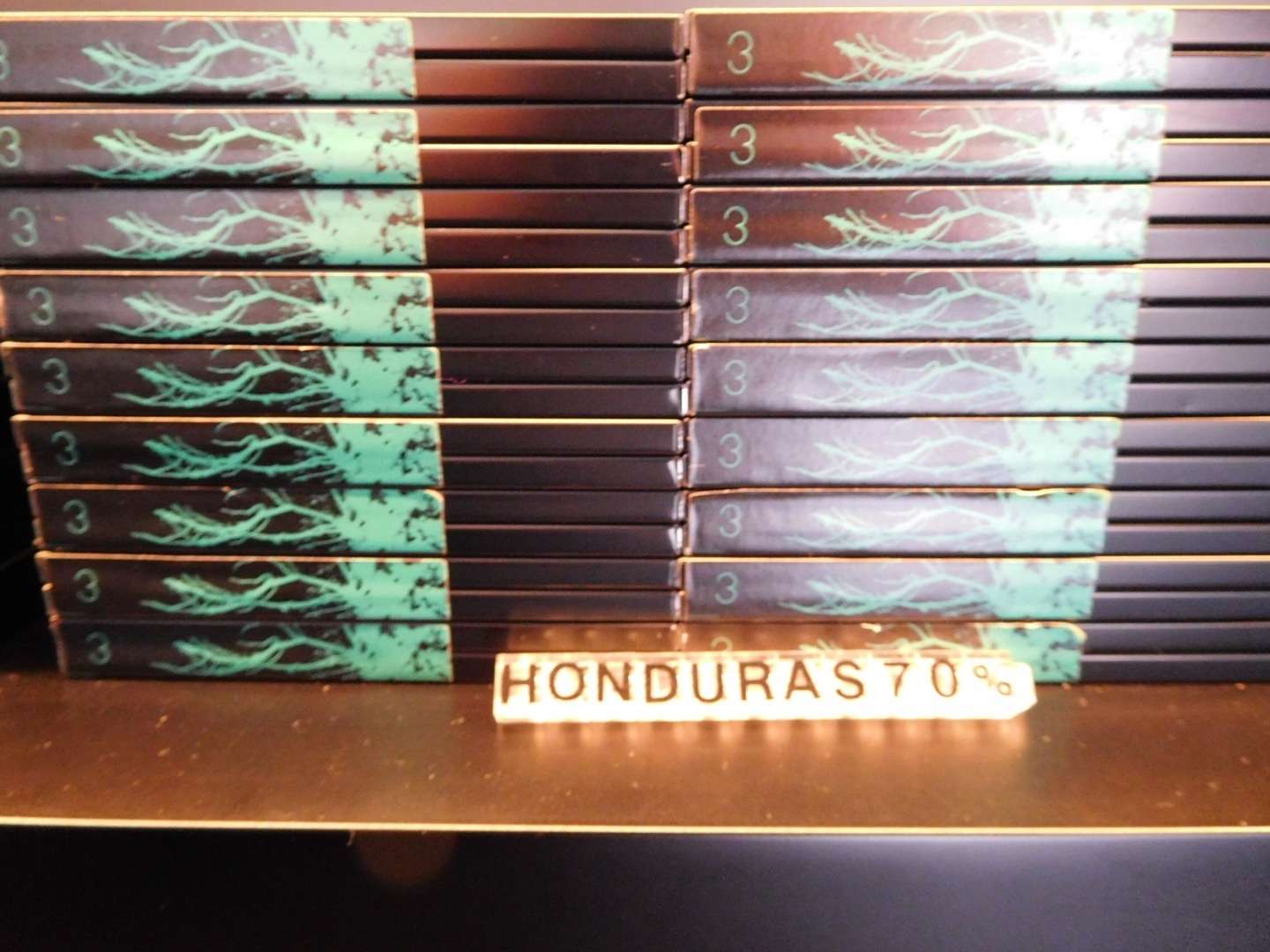 likely mostly consuming  milk chocolate rather than dark chocolate,  the lead author of the study has been quoted as saying “dark chocolate with higher cocoa content is better… because it is the cocoa, not the milk and sugar, that provides the benefit.”

Julia Volluz, in a nicely written piece at Vox  entitled “Dark chocolate is now a health food. Here’s how that happened.” describes how “over the past 30 years, food companies like Nestlé, Mars, Barry Callebaut, and Hershey’s— among the world’s biggest producers of chocolate — have poured millions of dollars into scientific studies and research grants that support cocoa science.”

Here at Vox, we examined 100 Mars-funded health studies, and found they overwhelmingly drew glowing conclusions about cocoa and chocolate — promoting everything from chocolate’s heart health benefits to cocoa’s ability to fight disease. This research — and the media hype it inevitably attracts — has yielded a clear shift in the public perception of the products.

“Mars and [other chocolate companies] made a conscious decision to invest in science to transform the image of their product from a treat to a health food,” said New York University nutrition researcher Marion Nestle (no relation to the chocolate maker). “You can now sit there with your [chocolate bar] and say I’m getting my flavonoids.”

Dark chocolate and cocoa products are rich in chemical compounds called flavanols. Flavanols have attracted interest as they might help to reduce blood pressure, a known risk factor for cardiovascular disease. The blood pressure-lowering properties of flavanols are thought to be related to widening of the blood vessels, caused by nitric oxide.
The latest Cochrane Review on this topic commented on the poor quality of the studies involved:

Studies were short, mostly between two and12 weeks, with only one of 18 weeks. The studies involved 1804 mainly healthy adults. They provided participants with 30 to 1218 mg of flavanols (average of 670 mg) in 1.4 to 105 grams of cocoa products per day in the active intervention group. Seven of the studies were funded by companies with a commercial interest in their results, and the reported effect was slightly larger in these studies, indicating possible bias.

This graph from Volluz’s Vox article demonstrates how much chocolate you would need to consume to get the average amount of flavanols that participants in these studies received: 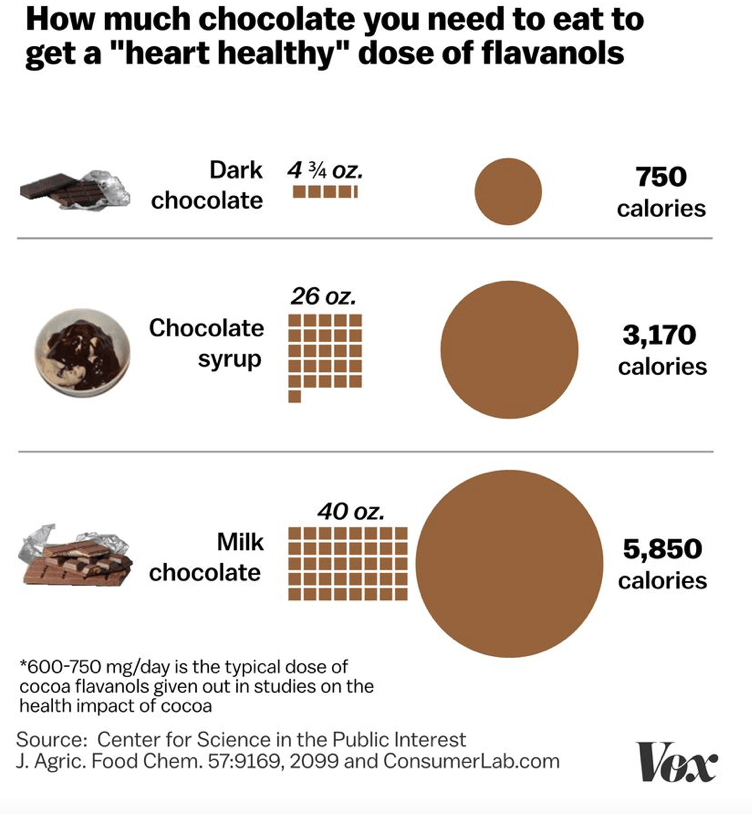 The Cochrane review felt there was

moderate-quality evidence that flavanol-rich chocolate and cocoa products cause a small (2 mmHg) blood pressure-lowering effect in mainly healthy adults in the short term.

Thus, for a very small drop in blood pressure you would have to make chocolate the main source of calories in your daily diet.
Consuming such large amounts of chocolate, even dark chocolate, would drastically increase your sugar consumption.
Further weakening any conclusions on the benefit of chocolate are that these are very short-term studies with markedly different baseline BPs, ages, and large variations in flavanol dosage.

Is Your Chocolate Produced By Slaves?

After reading the Danish AFib article, I purchased several bars of Tony’s Chocolonely chocolate that caught my eye at the Whole Foods checkout counter. The bars had interesting wrappers and on the inside of the wrapper I discovered that Tony’s Chocolonely’s claim to fame is that it is “slave-free.”
Per Wikipedia:

Tony’s Chocolonely is a Dutch confectionery company focused on producing and selling chocolate closely following fair trade practices, strongly opposing slavery and child labour by partnering with trading companies in Ghana and Ivory Coast to buy cocoa beans directly from the farmers, providing them with a fair price for their product and combating exploitation.

The slogan of the company is: “Crazy about chocolate, serious about people“.

I was previously unaware of the problem of child slavery and cocoa production. If you’d like to read more about it start here.
The Tony’s Chocoloney was so tasty I ended up consuming vast quantities of it at the end of the day and it disappeared rapidly. Currently the skeptical cardiologist’s house is chocolate free.

Should Chocolate Be Considered A Super Food or A Slave Food?

I can’t recommend chocolate to my patients as a treatment for high blood pressure or to reduce their risk of heart attack or stroke on the basis of the flimsy evidence available.
If you like chocolate, the evidence suggests no adverse effects of consuming it on a regular basis.
As far as flavanols obtained from cocoa and their benefits for cardiovascular disease, I eagerly awaiit the result of the ongoing Cocoa Supplement and Multivitamin Outcomes Study (COSMOS), a randomized trial looking at whether daily supplements of cocoa extract and/or a standard multivitamin reduces the risk of developing cardiovascular disease and cancer.
Patients and readers should recognize that there is an ongoing research/media campaign by Big Chocolate to convince them that chocolate is a SuperFood which can also be a dessert.
Flavanoidly Yours,
-ACP

13 thoughts on “Is Chocolate Good For The Heart?”