Medical Emergencies On Airplanes: Should Doctors "Heed The Call"?

In a recent episode of Larry David’s hilarious HBO series,  Curb Your Enthusiasm, (“Accidental Text on Purpose”), Larry, (after giving up his aisle seat to a woman with a supposedly overactive bladder) finds himself sitting next to Dr. Nathan Winocour. When a call for medical assistance for a stricken airplane passenger is issued, Larry is perturbed that the doctor fails to “heed the call.”
Winocour justifies his inaction with two comments:
“Give it a minute. He’s gonna be fine.” and
“Have you ever been part of an emergency landing? Is that what you want, Larry? To spend the night in Lubbock, Texas, at a Days Inn with a $15 voucher from Cinnabon? Think about it.”
He’s correct that the vast majority of medical “emergencies” resolve without any specific intervention.
And if he had attended on a patient with a serious non-transient medical problem he would suddenly find himself having to make an incredibly difficult and life-deciding decision on whether or not to  divert the plane or make an emergency landing with insufficient diagnostic tools and inadequate information.
Dr. Winocour is not alone in this failure to heed the call. Many physicians are conflicted about identifying themselves as a physician in medical emergencies-on planes or elsewhere.
Last year, a British physician was described in an article as having assisted in 3 medical emergencies while on American Airlines flights in the previous year. This man is so eager to assist in in-flight emergencies that he “pre-identifies” himself as a physician as he boards the plane.
I wondered how many physicians enthusiastically pre-identify themselves as ready to heed the call, so I posted a poll in 2017 on the physician social media site, SERMO.

A majority of physicians indicated that they were not interested in assisting in medical emergencies in flight. 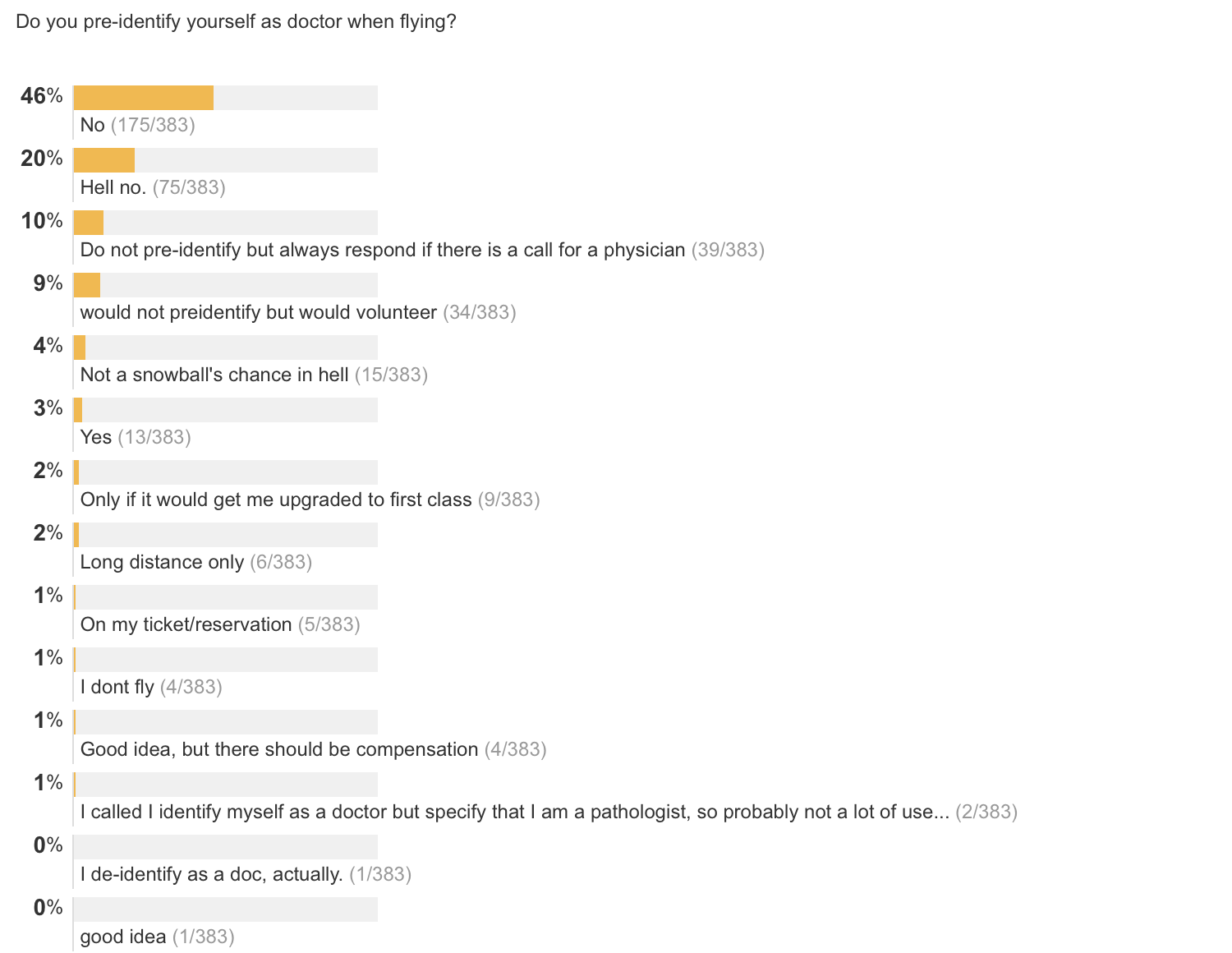 Only 3% would pre-identify (with another 2% agreeing to pre-identify if they were upgraded to first class). Another 19% would not pre-identify but would respond it there was a call for a physician.

“An individual shall not be liable for damages in any action brought in a Federal or State court arising out of the acts or omissions of the individual in providing or attempting to provide assistance in the case of an in-flight medical emergency unless the individual, while rendering such assistance, is guilty of gross negligence or willful misconduct.”

Despite this apparent protection, many physicians left comments like the one below on SERMO indicating they would not heed the call due to concerns about medical liability:

Yes, I am aware of good samaritan docs trying to come to the rescue but were sued anyway. The standard of care still applies to doctors rendering care, whether they are acting as a good samaritan or not- thus we are held to a much higher standard of care than any bystander would be rendering aid. Good samaritan laws in several states note that doctors remain bound to the physician standard of care whether charging the patient or not. Even if it is a life threatening situation involving a complete stranger, the doctors are held to a higher standard of care that permits the patient or their families to sue you. In Florida, there are no caps on malpractice, therefore you can be held personally liable for all your assets, with the exception of those held in “tenancy in entirety”. Therefore I never identify myself as a doctor when coming on a scene to help anyone outside my office, and never give my name if rendering aid.

Other physicians noted the lack of appropriate medical supplies on airplanes and the hassle factor.

I’ve responded several times. The last time was when the plane hit an air pocket and the drink cart came down on a flight attendant’s foot. I needed an Ace bandage. Opened the small kit–lots of stuff but no Ace. Opened the big kit to see the contents list. I could have run a code or taken out a GB–but nothing for a compression dressing. Finally wrapped her foot with her panty hose and put an ice pack on it. Then they insisted I fill out a raft of forms about opening the kits, although nothing had been touched. They had my name and address but didn’t bother to say thanks. I did hear from the flight attendant–her foot was fractured.
Never fill out those damn forms unless they agree to pay you for it. And take your own ace bandage.

One MD expressed concerns that failure to heed the call could lead to legal consequences:

I don’t think the risk is zero (in the US) if no other passenger identifies himself/herself as a physician in the event of a flight emergency. For example, if a passenger dies en route and it was later discovered you were on that flight and that had you intervened you might have saved a life, the family members could come after you.

Hm. Now I have another reason to wear ear plugs and close my eyes when flying; can’t be dinged when I did not hear/see the announcement for a physician.

This urologist’s comments are typical of those who have volunteered, but feel like they didn’t help too much and were inadequately thanked or compensated for their time and effort.

I assisted on a flight from Ireland back to the states. Woman had a vasovagal episode and passed out. Spent about 15 minutes and only thanks I got was asking me for my name and license number “just in case.” It was United Airlines. Will never offer my services again unless someone needs a foley.

Dr. Winocour’s failure to heed the call ended up costing him dearly. When he desperately needed a joke for a speech he was giving,  Larry refused to heed the comedian call.
How do you feel? Should physicians heed the call in the air?

9 thoughts on “Medical Emergencies On Airplanes: Should Doctors "Heed The Call"?”