Low-Fat Versus Low-Carb Diet: DIETFITS Show Both Can Work If They Are "Healthy"

In the ongoing nutritional war between adherents of low-fat and low-carb diets, the skeptical cardiologist has generally weighed in on the side of lower carbs for weight loss and cardiovascular health.
I’ve questioned the vilification of saturated fat and emphasized the dangers of added sugar. I’ve even dabbled in nutritional ketosis.
The science in  nutrition is gradually advancing and the DIETFITS study recently published in JAMA is a welcome addition.
DIETFITS is a  really well done study which provides important insights into three huge questions about optimal diet:

The Details Of DIETFITS

Stanford investigators recruited 609 San Francisco area individuals between the ages of 18 to 50 years with BMI of 28 to 40  and randomized them to a “healthy” low-fat diet or a “healthy” low-carb diet.
During the first 8 weeks of the study, low-fat participants were instructed to reduce fat consumption to <20 gm/ day while the low carb participants were instructed to reduce digestible carbohydrate to <20 gms/day.
Then individuals were allowed to add back fats or carbs back to their diets in increments of 5 to 15 g/d per week until “they reached the lowest level of intake they believed could be maintained indefinitely.”  Importantly no explicit instructions for energy restriction were given.
The “healthy” instructions for both groups were as follows

Thus both diets were successful for weight loss and both improved risk markers for cardiovascular disease after a year.

Surprisingly, the study found no significant diet-genotype interaction and no diet-insulin secretion interaction with weight loss.
This means that they could not predict (as many believed based on earlier studies) who will benefit from a low carb diet based on either currently available genetic testing or a generally accepted measure of insulin resistance.
As the authors point out, these findings “highlight the importance of conducting large, appropriately powered trials such as DIETFITS for validating early exploratory analyses.”

As you can imagine this study has led to quite an uproar and backlash from dedicated combatants in the macronutrient wars.
A reasoned summary and response from Andreas Eenfeldt, a low carb proponent can be found on his excellent low carb/keto Diet Doctor site here.
Eenfeldt concludes

If I’m allowed to speculate, the reason that we did not see any major additional benefit from low carb in this study is that the groups ended up so similar when it came to bad carbs. The low-fat group ended up eating fewer carbs too (!) and significantly less sugar, while the low-carb group ended with a somewhat weak low-carb diet, reporting 130 grams of carbs per day.

Larry Husten at Cardiobrief.org in his analysis of the study quotes a number of experts including Gary Taubes, the low carb pioneering journalist

Taubes speculates “that the weight loss may have been similar not because any diet works if you stick with it and cut calories (one possible interpretation) but because of what these diets had in common — avoid sugar, refined grains, processed foods. Whether the low-carb arm would have done even better had Gardner kept their carbohydrates low is something this study can’t say. (And Ornish [low-fat diet proponent] would probably say the same thing about fat consumption.)”

The low-fat or vegan disciples seem to have had a muted response to this study. I can’t find anything from John McDougal , Dean Ornish, Caldwell Esselstyn or Joel Fuhrman.
Readers feel free to leave comments which  link to relevant analysis from the low-fat proponents.

Julia Volluz at Vox wrote a fascinating piece recently which involved interviewing some of the participants in this study.
She points out that although the average DIETFITS participant lost over 10 pounds, “Some people lost more than 60 pounds, and others gained more than 20 during the year.” 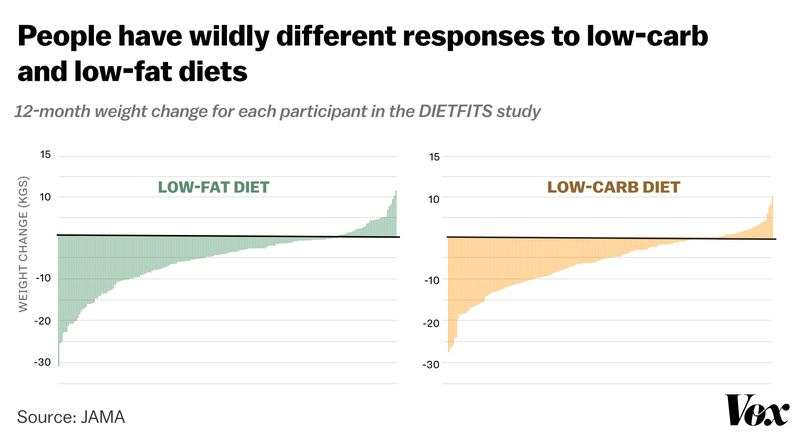 She obtained permission from the lead author, Christopher Gardner  and interviewed  “Dawn, Denis, Elizabeth*, and Todd — two low-fat dieters and two low-carb dieters — about their experiences of succeeding or faltering in trying to slim down”

And that leads us to one of the burning mysteries of diets: how to explain why some people fail where others succeed — or the extreme variation in responses. Right now, science doesn’t have compelling answers, but the unifying theme from the four study participants should be instructive: The particulars of their diets — how many carbs or how much fat they were eating — were almost afterthoughts. Instead, it was their jobs, life circumstances, and where they lived that nudged them toward better health or crashing.

Most likely the success of both of these diets is due to the instruction that both groups received on following a “healthy” diet. This guidance is remarkably similar to what I advocate and is something that combatants in the diet wars ranging from paleo to vegan can agree on.
The JAMA paper only provides the description I listed above but Volluz adds that participants were instructed to:

… focus on whole, real foods that were mostly prepared at home when possible, and specifically included as many vegetables as possible, every day … choose lean grass-fed and pasture-raised animal foods as well as sustainable fish ... eliminate, as much as possible, processed food products, including those with added sugars, refined white flour products, or trans-fats … prepare as much of their own food as possible. …

Indeed, if you want to see a very detailed description of the instructional process for participants check out the very detailed description of the methods here.
Yours in Health,
-ACP
N.B. I was searching for a reasoned response to this study from the low fat camp and to my surprise came across this fascinating video featuring the lead author of the study, Christopher Gardner, on (no fat/vegan) John McDougal’s YouTube site. Gardner is clearly on the side of sustainable, local , ethical food consumption but to his credit, his research , publications and comments on DIETFITS don’t reveal this.

7 thoughts on “Low-Fat Versus Low-Carb Diet: DIETFITS Show Both Can Work If They Are "Healthy"”