Joe’s Cafe: A Cornucopia of Visual and Musical Delights

The coolest music venue in St. Louis in my opinion is Joe’s Cafe.

Fortunately, for the skeptical cardiologist, the venue remains fairly obscure, even to music lover’s who reside in Saint Louis.

For example, last Thursday the Eternal Fiancee’ and I, along with Doug, the Guitarist of the Band of the skeptical cardiologist (GOBOSC) and his wife were able to sit within a couple of feet of Spencer Bohren as he played roots, blues, folk and Americana on a banjo, a lap steel or two, and an acoustic guitar.

Bohren, based out of New Orleans, also sang and told stories, often at the same time.

The GOBOSC and I, being musicians, appreciated the proximity which allowed us to observe closely what Bohren did with his non-finger-pick covered fingers and thumb.

You can watch a video of Bohren relating the history of a Blues song using five guitars here:

I’ve also seen Kinky Freidman at Joe’s. I’ve been a fan of Kinky’s since I heard “Get Your Biscuits In The Oven And Your Buns In The Bed” from his 1973 album Sold American. His wikipedia entry pretty accurately summarizes his career as follows:

American singer, songwriter, novelist, humorist, politician, and former columnist for Texas Monthly who styles himself in the mold of popular American satiristsWill Rogers and Mark Twain.[2] He was one of two independent candidates in the 2006 election for the office of Governor of Texas. Receiving 12.6% of the vote, Friedman placed fourth in the six-person race.

I had forgotten about the Kinkster since reading one of his (18) detective novels a few decades ago; I figured he had retired from the music business. To my surprise one day last year, I received an email from Joe’s Cafe indicating he would be playing there on an upcoming Thursday night.

Joe’s Cafe is the brain child of Bill Christman, a one time sign painter, now fine artist, and lover of good live music.

Bill decides who will perform, and introduces the acts, always with a quirky sense of humor, but a stern warning that we audience members should be listening when the artist is performing, and not talking or playing on iphones.

Christman’s studio, Ars Populi sits next to Joe’s Cafe. According to the RFT:

Christman quit the sign-painting business more than two decades ago in order to devote himself full-time to fine art — Ars Populi doubles as his studio — and today St. Louisans can find his handiwork all over town, perhaps most famously at Beatnik Bob’s Museum of Mirth, Mystery & Mayhem inside the City Museum. His homage to bohemia, Joe’s Café, is the stuff of legend in Christman’s Skinker-Debaliviere neighborhood and beyond; its sporadic schedule of music events and invite-only policy have combined to create a speakeasy vibe that — improbable as it might seem in this day and age — is uncontrived and genuine.

Arrive early to Joe’s Cafe for the best seats (although there are no “bad” seats-some do require a climb up a wooden ladder to the balcony) so you can wander through the wonder of the back yard.

Words are insufficient to describe what one encounters either inside or outside Joe’s Cafe, so let’s savor some snapshots of both.

First, some relatively random shots from outside: 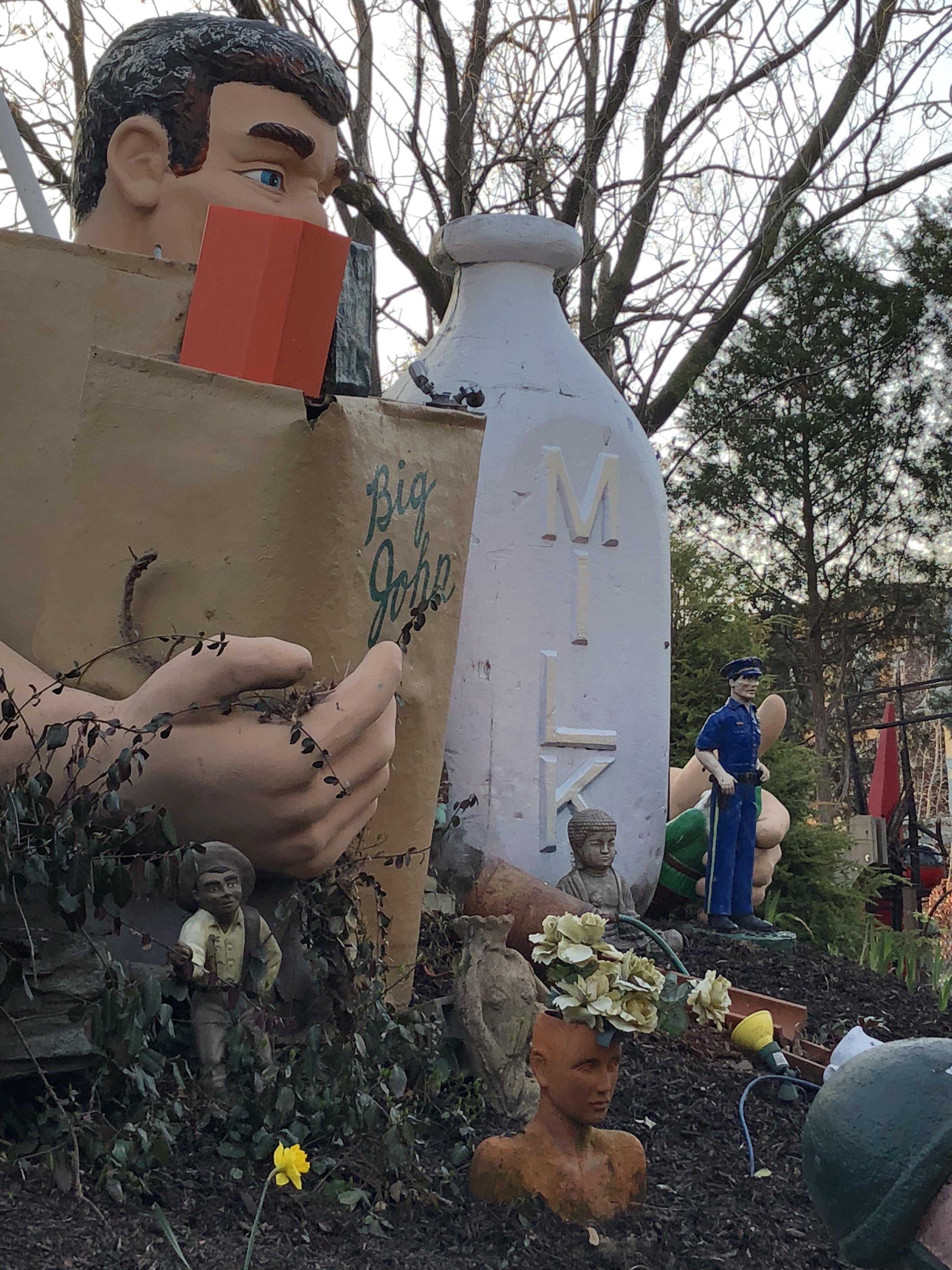 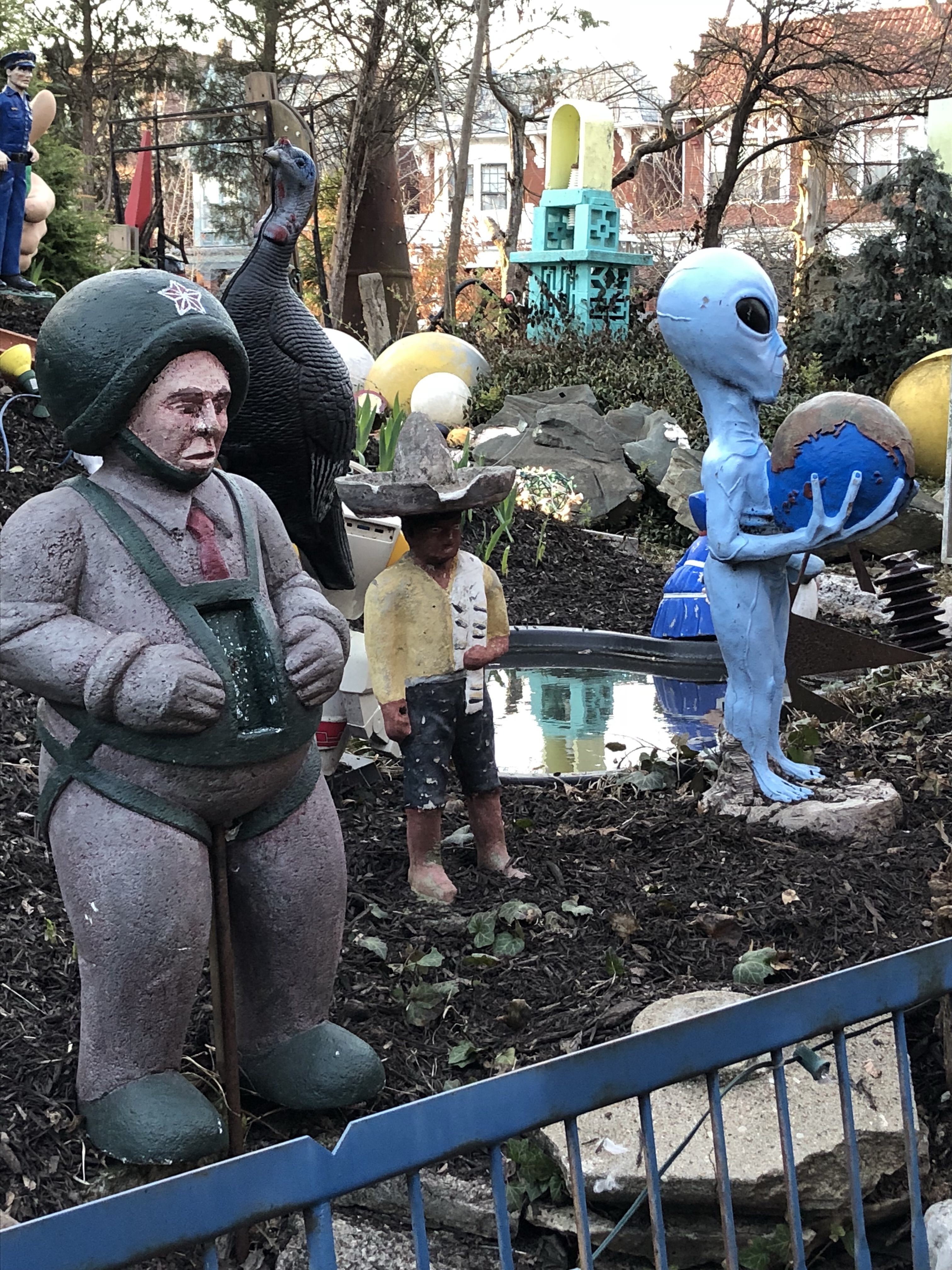 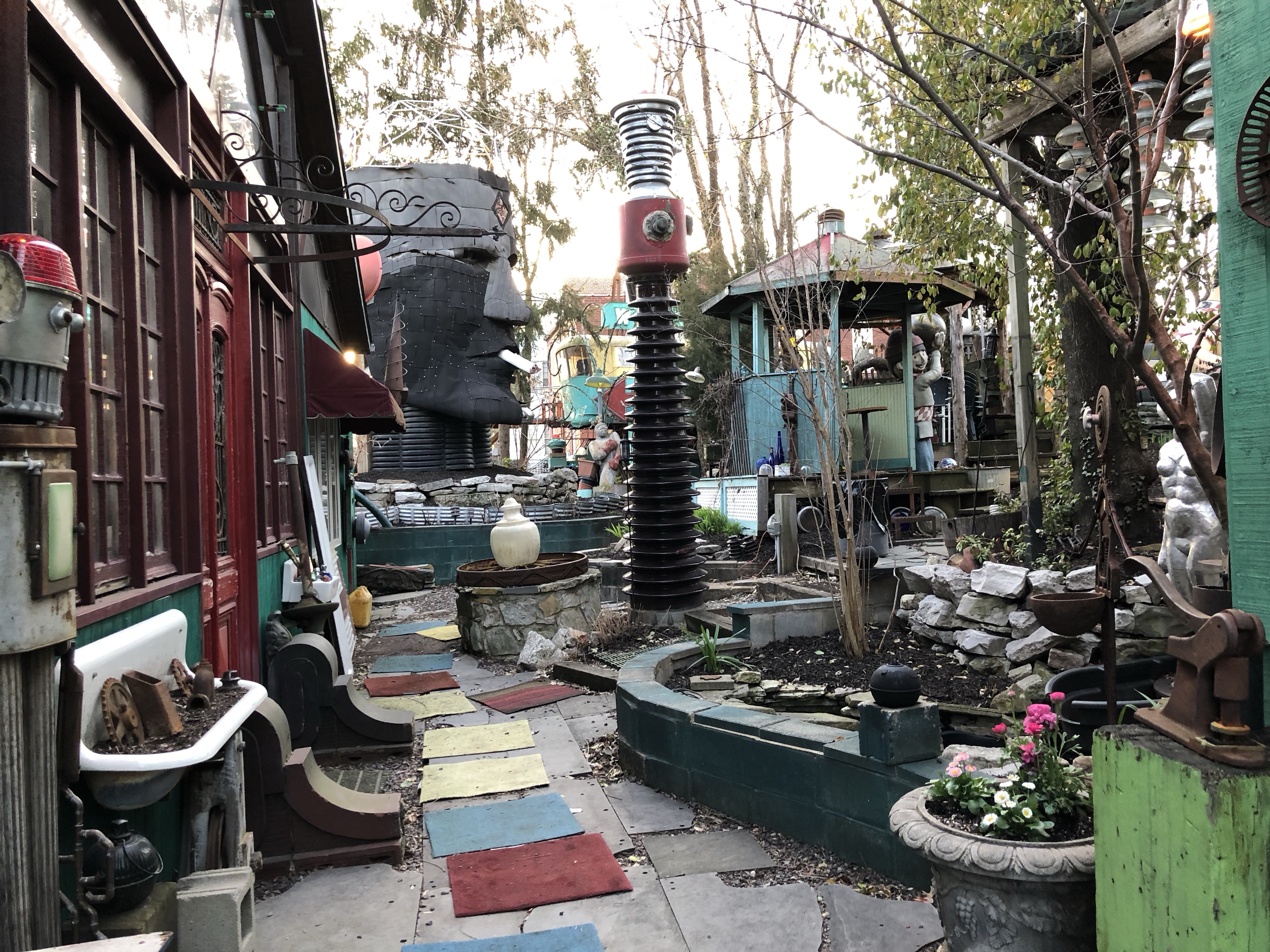 It has been said of the interior:

at Joe’s, you enter another dimension, a place lit by red neon and dusty yellow incandescent marquee bulbs

The Eternal Fiancee’ describes the decoration as “the interior of Joe’s Cafe is the reality of what TGI Friday’s does a bad job of imitating.”

If you end up going to Joe’s Cafe be sure and tell them the skeptical cardiologist sent you. And please, don’t tell your friends and neighbors how cool it is.

Here’s the Joe’s Mostly Official Facebook page https://www.facebook.com/stlouisjoescafe/
which often has better information than these emails.

Joe’s is a BYOB, BYOF music club.
Admission: $10
Doors open around 7:00
Music starts at 8:00
Alcohol consumption ends at 10:15
Recycle your own stuff
Smoking outside only
Park on Des Peres Ave. Thou shalt not annoy our neighbors.

1 thought on “Joe’s Cafe: A Cornucopia of Visual and Musical Delights”