Heart Attacks and E-cigarettes: Are America's Teens Putting Themselves At Risk?

Many of the skeptical cardiologist’s patients managed to quit cigarette smoking by using e-cigarettes . They often continue to vape, prolonging their addiction to nicotine but overall I felt they were probably better off than smoking cigarettes. However,  a couple of recent articles have me very concerned about the overall effect of e-cigarettes on public health.
The first article came from the PR department at  UCSF with the headline:
Smoking E-Cigarettes Daily, Doubles Risk Of Heart Attacks”
It focused on an abstract presented in Baltimore in February 2018 by Stanton Glantz, UCSF professor of medicine and director of the UCSF Center for Tobacco Control Research and Education. The abstract (paper yet to be published) was an observational study of about 70,000 individuals. Since it was observational the causality implied by the headline is not justified but the findings are still worrisome:

So e-cigarettes might be safer than real cigarettes but if you don’t quit smoking you are worse off:

Juul and The Rise In Teenage Vaping

The second article was from The New Yorker and is fascinating. Entitled “The Promise of Vaping and the Rise of Juul.” ,  it details an alarming rise in teenage vaping which often involves a particular brand of e-cigarette, Juul,  which resembles a flash drive.

To Juul (the brand has become a verb) is to inhale nicotine free from the seductively disgusting accoutrements of a cigarette: the tar, the carbon monoxide, the garbage mouth, the smell. It’s an uncanny simulacrum of smoking. An analyst at Wells Fargo projects that this year the American vaporizer market will grow to five and a half billion dollars, an increase of more than twenty-five per cent from 2017. In the latest data, sixty per cent of that market belongs to Juul.

In March, a congressionally mandated report on the health effects of e-cigarettes  from the National Academies of Sciences, Engineering, and Medicine concluded:

With respect to cardiovascular diseases, their conclusions were:

Long term, it is anyone’s guess what the consequences of vaping on the cardiovascular system will be.
As the New Yorker article makes abundantly clear, however, the youth of America are taking up vaping and Juuling increasingly and the National Academies are appropriately worried:

However, their long-term health effects are not yet clear. Among youth — who use e-cigarettes at higher rates than adults do — there is substantial evidence that e-cigarette use increases the risk of transitioning to smoking conventional cigarettes

Are Your Kids Vaping?

In 2015 there was a 40% chance your middle school or high school child had used e-cigarettes. The chart below from the CDC shows how rapidly rates are climbing. 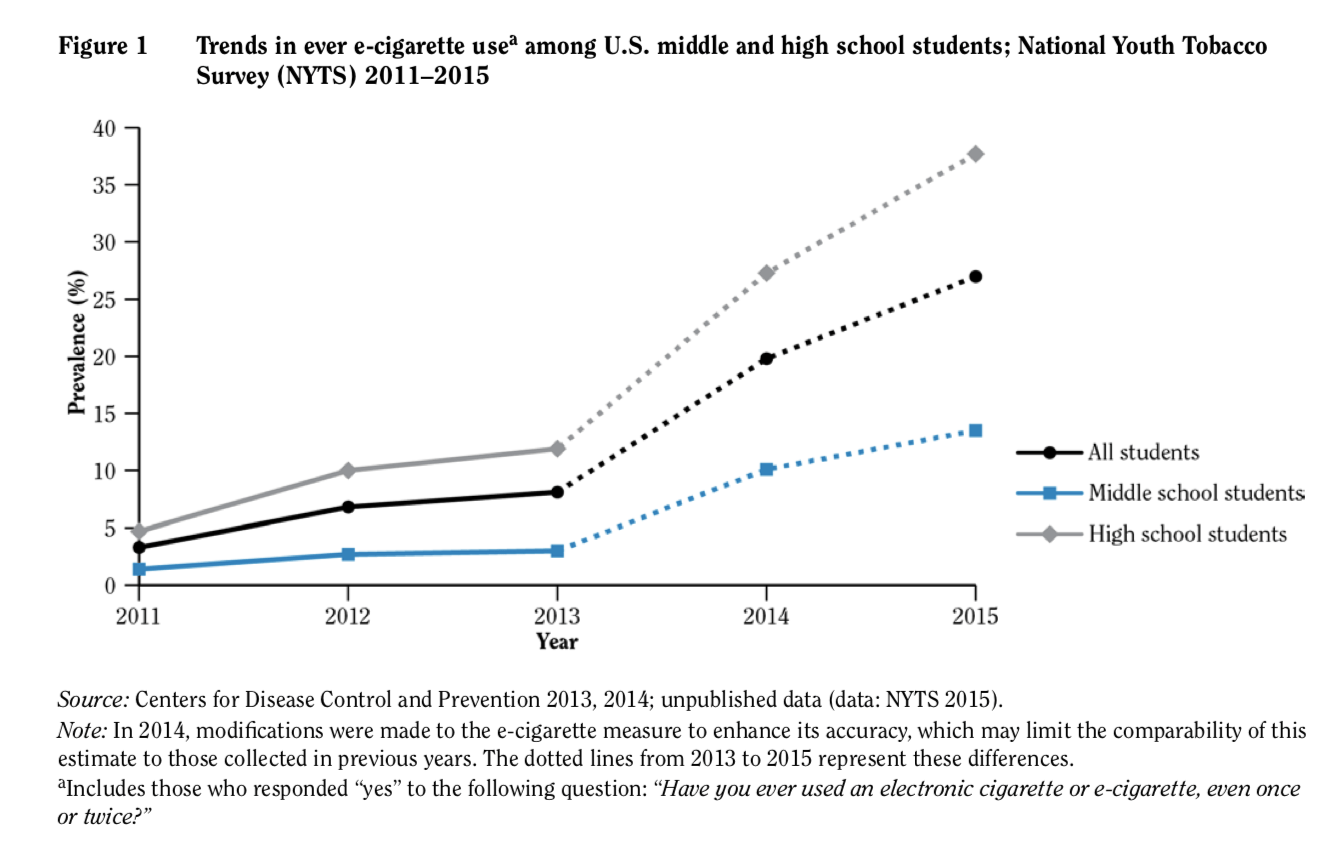 The surgeon general/CDC issued a warning in 2016, writing:

E-cigarette use among U.S. youth and young adults is now a major public health concern. E-cigarette use has increased considerably in recent years, growing an astounding 900% among high school students from 2011 to 2015. These products are now the most commonly used form of tobacco among youth in the United States, surpassing conventional tobacco products, including cigarettes, cigars, chewing tobacco, and hookahs. Most e-cigarettes contain nicotine, which can cause addiction and can harm the developing adolescent brain.
Compared with older adults, the brain of youth and young adults is more vulnerable to the nega- tive consequences of nicotine exposure. The effects include addiction, priming for use of other addic- tive substances, reduced impulse control, deficits in attention and cognition, and mood disorders. Furthermore, fetal exposure to nicotine during pregnancy can result in multiple adverse consequences, including sudden infant death syndrome, altered corpus callosum, auditory processing deficits, effects on behaviors and obesity, and deficits in attention and cognition. Ingestion of e-cigarette liquids con- taining nicotine can also cause acute toxicity and possibly death if the contents of refill cartridges or bottles containing nicotine are consumed.

Vaping devices no longer clearly look like cigarettes. Here are some examples from the CDC report. 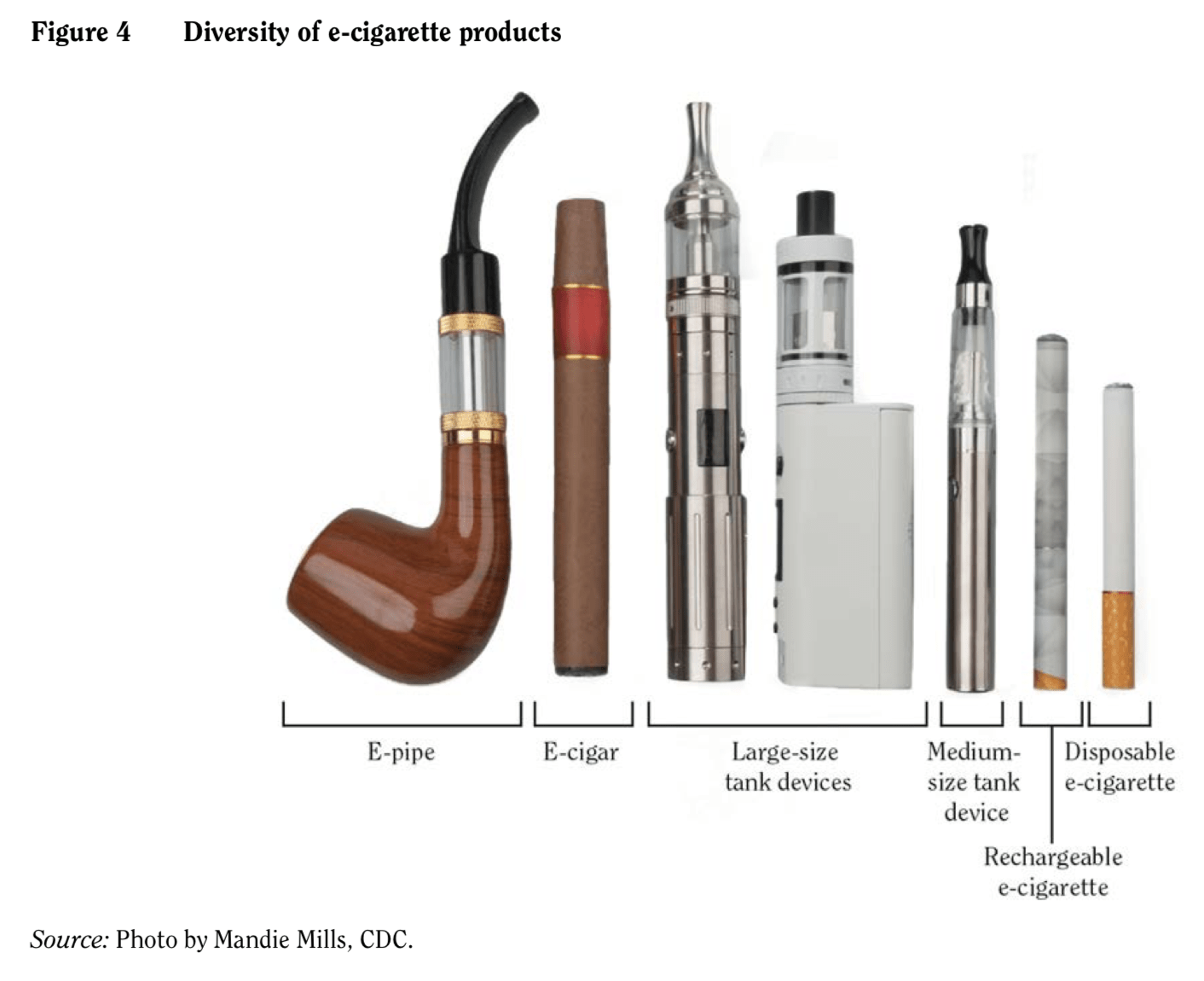 Note, however, that the Juul is not depicted.

It doesn’t look like a cigarette or a device that would be facilitating your child’s addiction to nicotine. And it has a USB port so it can be recharged from a laptop.


This wasn’t an issue as far as I can tell when my children were teens but I’m pretty sure if I had teenagers I would ban vaping and would confiscate anything that resembled an e-cigarette including  flash or thumb drives that aren’t flash or thumb drives.
Skeptically Yours,
-ACP

4 thoughts on “Heart Attacks and E-cigarettes: Are America's Teens Putting Themselves At Risk?”