The skeptical cardiologist has a confession to make: he’s been adding ground flaxseed to his typical late morning full fat yoghurt plus berries and almonds.
Adding flaxseed seems dangerously close to dietary behaviour I have been advising against: supplementing instead of eating real food.
Also, I am philosophically opposed to going out of my way to eat any edible that is consistently promoted as a “super food” or a “functional food.” To me, these are meaningless terms and marketing blather
When I began writing this post in 2017 I was getting my flaxseed from Stober Farms (Est. 1901) who had been producing “for over 100 years  the finest flax in the world.”  Stober Farms provided me with “organic Golden Flax Seed which has been Cold-Milled Processed.”
Stober Farms (who have since mysteriously gone into bankruptcy) also informed me:

Flax is digested most effectively when ground. Some grinding methods generate heat when milled, spurring early omega-3 oxidation. Stober Farms uses a unique cold-milled process, which gently grinds the seed without significantly raising the temperature. This proprietary method preserves the nutrients, flavor and extends the shelf life to 22 months.

Honestly, I don’t recall exactly why I began “flaxing” but I suspect I felt it was a good way to boost the fat content in my full fat yoghurt (yes, I am now spelling yoghurt with an h) and berries and perhaps sufficiently satiate me that it would be the only food I would need to consume until dinner or late afternoon.
Two tablespoon (14 grams) is what I typically  imprecisely add. 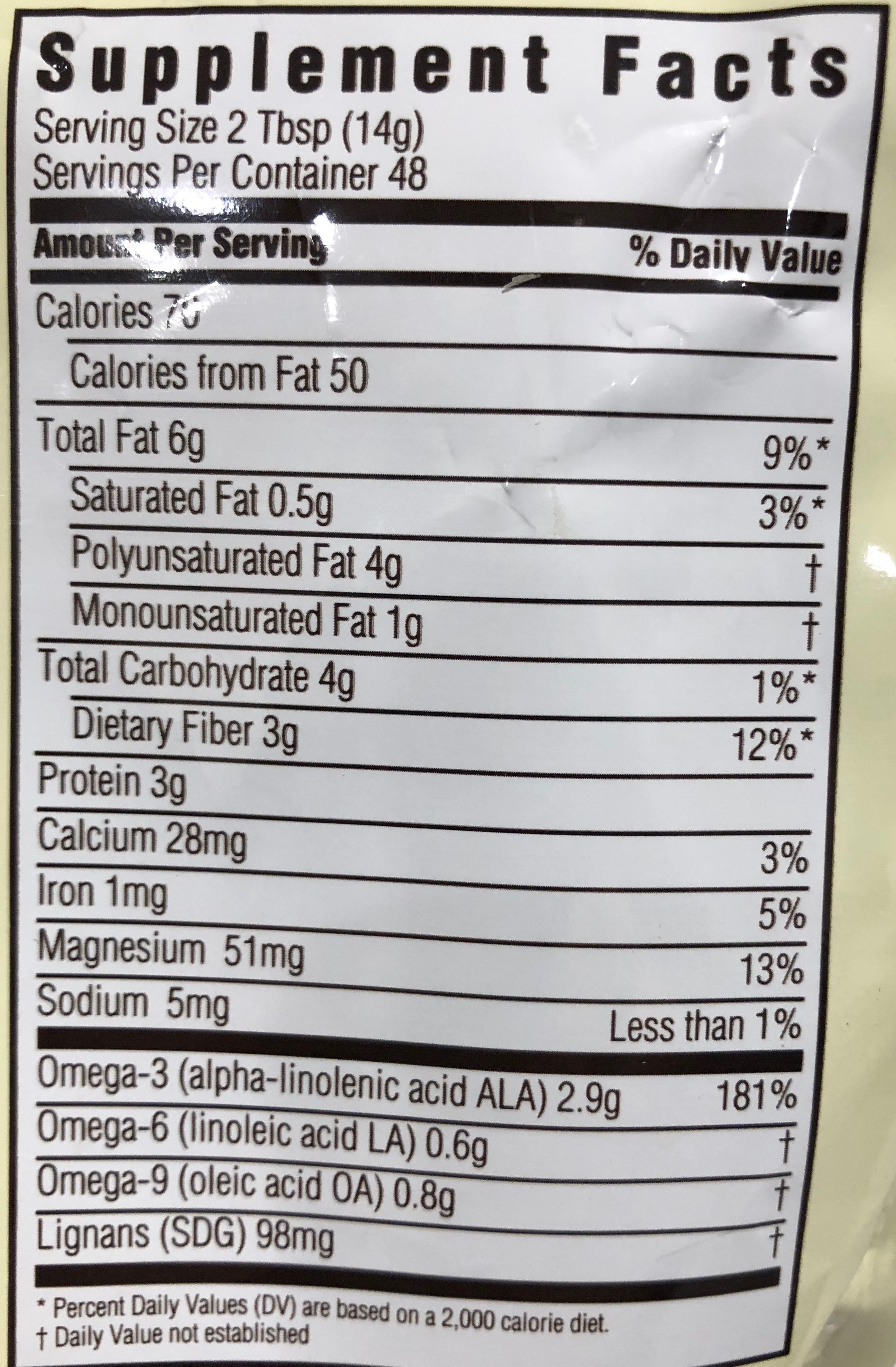 These tablespoons provide 75 kcal of energy which comes from 3 grams of protein, 6 grams of fat, and 4 grams of carbs.  Three of the four carb grams are soluble fibre.
About half of the fat in flaxseed is in the form of alpha-linolenic acid (ALA)(18:3) an omega-3 polyunsaturated (PUFA) fat.  Flaxseed oil contains five times more ALA than walnut oil or canola oil, which are the next highest sources of ALA.

Is Flaxseed A Super Functional Food?

Many seemingly authoritative sites on the internet proclaim that flaxseed is incredibly healthy. For example, Healthline.com’s “Authority Nutrition” (they must be authoritative as authority is in their name)  presents their 10 health benefits of eating flaxseed “backed by science”  and concludes:

They can be used to improve digestive health, lower blood pressure and bad cholesterol, reduce the risk of cancer and may benefit people with diabetes.

But typical of  Authority Nutrition’s overblown claims  these are not truly proven by science. The studies cited are weak; typically short-term tests of biomarkers or animal studies or human studies with very small numbers. Most importantly. these studies , which are often funded by flaxseed promoters are highly likely to be biased in favor of positive results.
Most websites tout the cardiovascular benefits of the omega-3 PUFA in flaxseed, the high percentage of soluble fibre and  the benefits of a chemical which cannot be named (due to a name which is too difficult to pronounce), SDG.
Omega-3 PUFAs and fibre I’ve touched on previously (and positively) but what about the mysterious and unpronounceable SDF. Per a 2010 review article

Flaxseed is the richest source of the lignan secoisolariciresinol diglucoside (SDG). After ingestion, SDG is converted to secoisolariciresinol, which is further metabolised to the mammalian lignans enterodiol and enterolactone. A growing body of evidence suggests that SDG metabolites may provide health benefits due to their weak oestrogenic or anti-oestrogenic effects, antioxidant activity, ability to induce phase 2 proteins and/or inhibit the activity of certain enzymes, or by mechanisms yet unidentified.

Like so many putative wonder phytochemicals, SDG has a “growing body of evidence” for lots of things but actual proof that it does anything worthwhile in humans is lacking and awaits  well done randomized clinical trials
Poorly researched articles on flaxseed are highly likely to tout its anti-inflammatory properties. These properties are seen in rats but unfortunately haven’t been proven in my favorite species, Homo Sapiens ,  Flaxseed doesn’t seem to decrease the inflammatory marker CRP in humans as reported in this systematic review and meta-analysis.

ALA and Cardiovascular Disease

As I’ve indicated in previous posts, evidence supports fatty fish consumption as beneficial in reducing cardiovascular disease presumably by increasing levels of marine omega-3 PUFAs in the body.
The value of fish oil supplementation, however, is not proven (see here).
How does ALA compare to the seafood omega 3s  in preventing cardiovascular disease (CVD)?
In 2012, researchers at the Harvard School of Public Health published a systematic review and meta-analysis of the existing data on ALA and the risk of CVD..
Their introductory paragraph nicely lays out why ALA could be very important to public health:

A large body of evidence supports a potential protective effect of seafood omega-3 (n−3) fatty acids, particularly EPA (20:5n−3) and DHA (22:6n−3), on coronary heart disease (CHD. However, fewer studies have evaluated how the plant-derived omega-3 fatty acid α-linolenic acid (ALA; 18:3n−3) relates to risk of CHD and other cardiovascular disease (CVD) outcomes, and the results have been inconsistent As an essential fatty acid that cannot be synthesized by humans, ALA is mainly consumed from plant sources, including soybeans, walnuts, and canola oil. Compared with seafood omega-3 fatty acids, ALA from plant sources is more affordable and widely available globally. Thus, whether ALA can reduce the risk of CVD is of considerable public health importance.

If plant-derived ALA can provide our omage-3 PUFA needs then perhaps we can stop stripping the ocean of all the menhaden.
In the Harvard analysis when all 27 studies were combined the authors found a significant risk reduction of 14% in CVD events with flaxseed.
There were lots of issues with the data which I won’t bore you with leading the authors to conclude that “ALA consumption may be beneficial “.  They emphasized the need for additional well-designed observational studies and randomized clinical trials in the area.
Since observational studies cannot prove causality, I await a good randomized clinical trial of ALA supplementation before I can recommend ALA supplementing to prevent heart disease.

After Performing This Review Is The Skeptical Cardiologist Still “Flaxing”?

I am. Because I’ve found that when I consume flaxseed I feel 20 years younger, full of vitality. and with a youthful golden sheen to my hair, nails and skin.

Actually, that last sentence is untrue.
I’m still adding ground flaxseed to my yoghurt but not with any expectation that it is reducing my risk of heart attack and definitely not because I perceive it as a super or functional food.
I like the taste, the convenience, and the extra (presumably healthy) calories it provides but I’m still an advocate of just eating real food rather than trying to identify specific nutrients, nutraceuticals or supplements and add them to your diet.
Flaxseedingly Yours,
-ACP
N.B. I did not touch on omega-6/omega-3 ratios in the diet. I’ve been examining that inflammatory (enjoy the pun) topic for years and once I come across a good study that adds to understanding in the area I will likely publish a post on it.