We Are Soon Bound For The Galapagos Islands In Search Of Darwin, The Giant Tortoise, and Dangerous Ideas


In August, the skeptical cardiologist and his eternal fiancée (and our friends Dave and Barb) will be visiting the Galapagos Islands on the 78 foot yacht, the Samba.
I’ve long wanted to visit this archipelago with its fascinating geographic and biologic features and its connection with Charles Darwin.
Darwin, born in 1809, was the son of a successful Shropshire 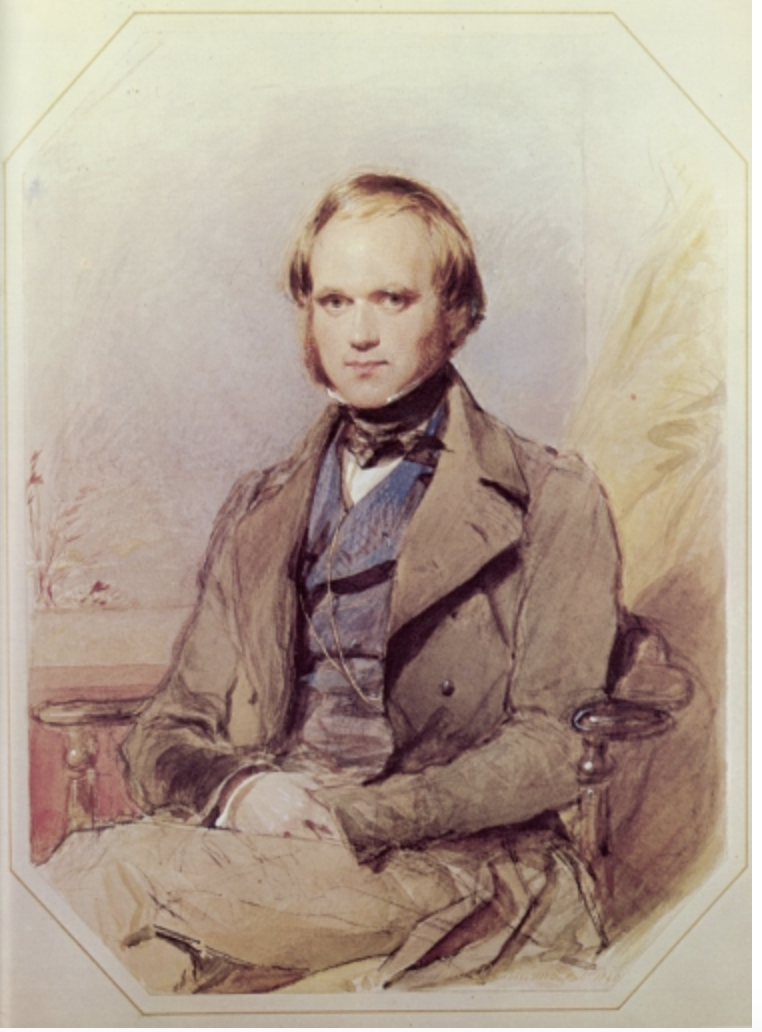 physician and financier. By the age of 8, he writes in his Autobiography, “my taste for natural history, and more especially for collecting, was well developed. I tried to make out the names of plants and collected all sorts of things, shells, seals, franks, coins, and minerals. The passion for collecting, which leads a man to be a systematic naturalist, a virtuoso or a miser, was very strong in me, and was clearly innate, as none of my sisters or brother ever had this taste.”
After 2 years of studying medicine at Edinburgh University, Darwin writes, “my father perceived or he heard from my sisters, that I did not like the thought of being a physician, so he proposed that I should become a clergyman.”
In the course of obtaining the undergraduate degree needed to join the ministry, Darwin  developed a passionate interest in natural history, and two books in particular, instilled in him the desire to be a scientist:

During my last year at Cambridge I read with care and profound interest Humboldt’s Personal Narrative. This work and Sir J. Herschel’s Introduction to the Study of Natural Philosophy stirred up in me a burning zeal to add even the most humble contribution to the noble structure of Natural Science.

After graduating Cambridge, Darwin, being recognized as “a young man of promising ability, extremely fond of geology, and indeed all branches of natural history,” was offered a position on a ship destined for a 5 year voyage around the world. This would profoundly influence his life and mankind’s vision of its origin.

The Voyage of the Beagle

In preparation for my visit to the Galapagos and our voyage on the Samba, I have been reading (from a free digital download) Darwin’s account of that historic voyage:  “The Voyage of the Beagle” (originally entitled “Journal of researches into the natural history and geology of the countries visited during the voyage of HMS Beagle round the world,” published in 1839), which Darwin introduces thusly:

HIS MAJESTY’S ship, Beagle, under the command of Captain FitzRoy, was commissioned in July, 1831, for the purpose of surveying the southern parts of America, and afterwards of circumnavigating the world. In consequence of Captain FitzRoy having expressed a desire that some scientific person should be on board, and having offered to give up part of his own accommodations, I volunteered my services; and through the kindness of the hydrographer, Captain Beaufort, my appointment received the sanction of the Admiralty.

The Beagle was only 12 feet longer than the Samba motored sailing boat that we, along with 12 other adventurous passengers, 5 crew men and a guide, have selected for our Galapagos tour. However, Darwin’s vessel carried, in addition to Fitzroy and Darwin, 71 other passengers (whose names you can ponder here).

On the 27th of December, 1831, the Beagle sailed from Devonport with the object of completing:

“the survey of Patagonia and Tierra del Fuego, commenced under Captain King in 1826 to 1830, — to survey the shores of Chile, Peru, and of some islands in the Pacific — and to carry a chain of chronometrical measurements round the World. ”

The Beagle spent four years surveying the east coast of South American and didn’t reach the Galapagos until the fall of 1835, nearly 4 years after its launch.  Darwin describes the islands as follows:

“SEPTEMBER 15th. — This archipelago consists of ten principal islands, of which five exceed the others in size. They are situated under the Equator, and between five and six hundred miles westward of the coast of America. They are all formed of volcanic rocks; a few fragments of granite curiously glazed and altered by the heat, can hardly be considered as an exception. 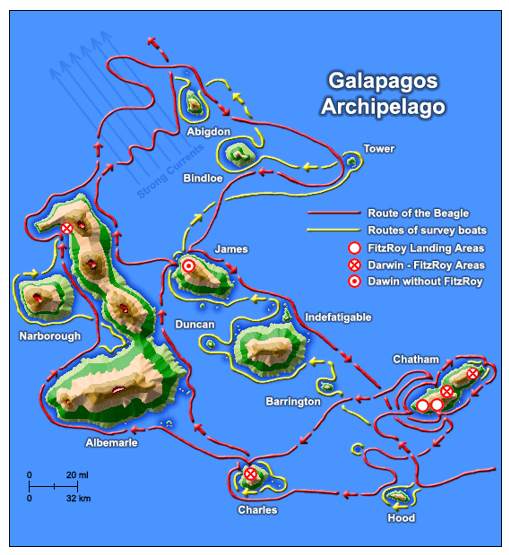 FitzRoy and his officers developed updated charts of the archipelago, while Darwin collected geological and biological specimens on the islands.
(Our voyage below, visits the northwestern Galapagos, islands crossing paths with Darwin when we land in Isabella and Floreana

The Giant Tortoises of the Galapagos Islands

Darwin learned much on his voyage, not just about the geology and biology of the islands, but also about himself and the importance of reason and observation:

I discovered, though unconsciously and insensibly, that the pleasure of observing and reasoning was a much higher one than that of skill and sport. The primeval instincts of the barbarian slowly yielded to the acquired tastes of the civilized man.

Apparently his acutely observant father identified these changes in thinking just by looking at Charles:

That my mind became developed through my pursuits during the voyage, is rendered probable by a remark made by my father, who was the most acute observer whom I ever saw, of a sceptical disposition, and far from being a believer in phrenology; for on first seeing me after the voyage, he turned round to my sisters and exclaimed, “Why, the shape of his head is quite altered.”

So, dear friends and patients, pay close attention to the shape of my head upon my return from the Voyage of the Samba. You might assume the large occipital protuberance is a result of a nasty fall from the top of a giant tortoise when, in fact, it is the outward representation of all the brilliant observations and dangerous ideas I have acquired on my trip.
Galapaghostly Yours,
-ACP
N.B. Of the many observations that Darwin made while he was on the Galapagos Islands, I found his comments on the pericardium of the giant tortoises the most intriguing. My next post on Darwin and the Galapagos will explore in detail this fascinating cardiologic observation.

0 thoughts on “We Are Soon Bound For The Galapagos Islands In Search Of Darwin, The Giant Tortoise, and Dangerous Ideas”