Were They Visions of Quilotoa Or The Birthplace Of Little Rocket Man?

The skeptical cardiologist periodically updates the “header image” for this blog, typically uploading an iPhone “pani” of somethinng he considers beautiful, cool or quirky from one of his travels.
I can’t recall any comments on the header images so I had presumed that nobody really cares what is up there.
However, for my last header image (which at the time of this writing should still be above) I used a picture from my recent trip to Ecuador.

After returning from the Galapagos we drove north from Quito for 4 hours to Quilotoa and took the picture that is the current header image.
Per Wikipedia

Quilotoa (Spanish pronunciation: [kiloˈto.a]) is a water-filled caldera and the most western volcano in the EcuadorianAndes. The 3-kilometre (2 mi)-wide caldera was formed by the collapse of this dacite volcano following a catastrophic VEI-6 eruption about 600  years ago.

A reader, commenting on my aspirin post, added the following cryptic words:

Also, I would be (very) interested to know about your ‘attachment’ / interest in Chang Bai Shan (‘Great White Mountain’ on the border of China / N Korea; one of the world’s largest stratovolcanoes)??? FWIW, we have(nick-)named one of our grandchildren (boy) with this name. My wife is Chinese/Taiwanese; my daughter has lived for 15? years in Beijing… All speak Mandarin (& English)…

I had no idea what he was talking about until I googled chang bai shan and looked at this image of “Heavenly Lake” which looks remarkably similar to the view we had over the Lagoon inside Quilotoa. 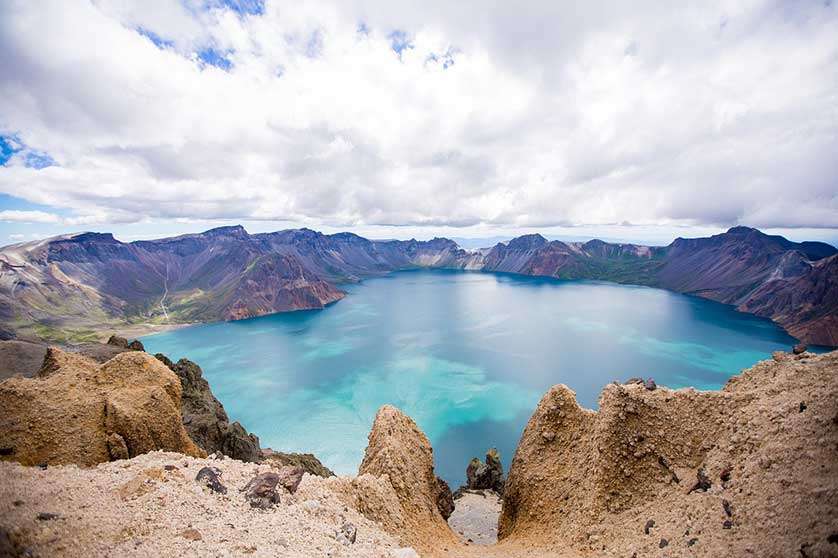 “Changbaishan Nature Reserve is the largest reserve in China, covering over 850 square miles. The rocks of Changbaishan supposedly have a white shimmer, giving the area its name (changbai means “ever white” in Chinese). The vast reserve comprises a collection of craggy peaks encircling Heavenly Lake, which occupies the crater of a long dormant volcano.”
This Chinese tourism site notes that a third of the Heavenly Lake lies in North Korea ” and its environs are considered sacred by both the Chinese and North Koreans; in Korean the area is known as Paektusan, and the North Korean leader Kim Jong Il claimed it as his “birthplace”. The imperial Qing dynasty, a Manchu family, revered Changbaishan as a holy land and the cradle of the Manchurian race.”
Despite the attraction of seeing the birthplace of Little Rocket Man, I have decided not to put Changbaishan on my bucket list because

Heavenly Lake’s cross-border status demands careful hiking – as recently as 1998 a British tourist was incarcerated for a month in North Korea for accidentally stepping across the poorly demarcated international line.

Stratovolcanically Yours,
-ACP
N.B. One of our party (who shall remain eternally nameless) experienced symptoms likely related to the rapid ascent to 13000 feet.

Here’s  a cool graphic from JAMA related to it

8 thoughts on “Were They Visions of Quilotoa Or The Birthplace Of Little Rocket Man?”