The skeptical cardiologist had been avoiding reader pleas to comment on a paper recently published in the Lancet from the PURE study which showed that full fat dairy consumption is associated with a lower risk of mortality and cardiovascular disease. It felt like beating a dead horse since  I’ve been writing for the last 5 years that the observational evidence nearly unanimously shows that full fat dairy is associated with less abdominal fat, lower risk of diabetes and lower risk of developing vascular complications such as stroke and heart attack. However, since bad nutritional advice in this area stubbornly persists and the PURE study is so powerful and universally applicable, I felt compelled to post my observations.

What Did the PURE Study Show?

The PURE (Prospective Urban Rural Epidemiology)  study enrolled 136, 00 individuals aged 35–70 years from 21 countries in five continents. Dietary intakes of dairy products ( milk, yoghurt, and cheese) were recorded.. Food intake was stratified  into whole-fat and low-fat dairy. The primary outcome was the composite of mortality or major cardiovascular events.
Consumption of 2 servings of dairy per day versus none was associated with a 16% lower risk of the primary outcome. The high dairy consumers had an overall 17% lower risk of dying. They had a 34% lower risk of stroke.
People whose only dairy consumption consisted of  whole-fat products had a significantly lower risk of the composite primary endpoint (29%).
Here’s how one of the authors of the PURE study summarized his findings (quoted in a good summary at TCTMD)

“We are suggesting that dairy consumption should not be discouraged,” lead investigator Mahshid Dehghan, PhD (McMaster University, Hamilton, Canada), told TCTMD. “In fact, it should be encouraged in low-to-middle income countries, as well as in high-income countries among individuals who do not consume dairy. We have people in North America and Europe who are scared of dairy and we would tell them that three servings per day is OK. You can eat it, and there are beneficial effects. Moderation is the message of our study.”

Despite these recent  findings and the total lack of any previous data that indicates substituting low or no fat dairy for full fat dairy is beneficial,  the American Heart Association (AHA)and major nutritional organizations continue to recommend skim or low fat cheese, yogurt and milk over full fat , non-processed  dairy products.

The AHA Continues Its Misguided Vilification Of All Saturated Fat

Medpage today quoted an AHA spokesman as saying in response to the PURE study:

“Currently with the evidence that we have reviewed, we still believe that you should try to limit your saturated fat including fat that this is coming from dairy products,” commented Jo Ann Carson, PhD, of UT Southwestern Medical Center in Dallas and a spokesperson for the American Heart Association.
“It is probably wise and beneficial to be sure you’re including dairy in that overall heart-healthy dietary pattern, but we would continue to recommend that you make lower fat selections in the dairy products,” Carson told MedPage Today regarding the study, with which she was not involved.

Bad Nutritional Advice From The AHA Is Not New

Of course, the AHA has been notoriously off base on its nutritional advice for decades. selling its “heart-check” seal of approval to sugar-laden cereals such as Trix, Cocoa Puffs, and Lucky Charms and promoting trans-fat laden margarine. These products could qualify as heart-healthy because they were low in cholesterol and saturated fat.
To this day, the AHA’s heart-check program continues to promote highly processed junk food as heart-healthy while raking in millions of dollars from food manufacturers.
The AHA’s heart-check program is still using low cholesterol as a criteria for heart-healthy food whereas the 2015 Dietary Guidelines concluded that dietary cholesterol intake was no longer of concern.
Why would anyone believe the AHA’s current nutritional advice is credible given the historical inaccuracy of the program?
I’ve noticed that the dairy industry has done nothing to counter the idea that Americans should be consuming skim or low fat dairy product and discussed this with a dairy farmer who only sells full fat products a few years ago.
I posted his comments on this in my blog In April, 2016 and thought I would repost that posting for newer readers below:

The Skim Milk Scam:Words of Wisdom From a Doctor Dairy Farmer

Full fat dairy is associated with less abdominal fat, lower risk of diabetes and lower risk of developing vascular complications such as stroke and heart attack. 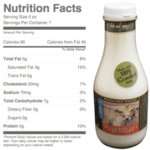 I’ve been consuming  full fat yogurt and milk  from Trader’s Point Creamery in Zionsville, Indiana almost exclusively since visiting the farm and interviewing its owners a few years ago.
Dr. Peter(Fritz) Kunz, a plastic surgeon, and his wife Jane, began selling milk from their farm after researching methods for rotational grazing , a process which allows  the cows to be self-sustaining: the cows feed themselves by eating the grass and in turn help fertilize the fields,  . After a few years of making sure they had the right grasses and cows, the Kunz’s opened Traders Point Creamery in 2003.
Two more studies (summarized nicely on ConscienHealth, an obesity and health blog)  came out recently solidifying the extensive data supporting the health of dairy fat and challenging the nutritional dogma that all Americans should be consuming low-fat as opposed to full fat dairy.

Dr. Kunz opened my eyes to the dirty little secret of the dairy industry when i first talked to him: dairy farmers double their income by allowing milk to be split into its fat and non-fat portions therefore the industry has no motivation to promote full fat dairy over nonfat dairy.
Recently, I  presented him with a few follow-up questions to help me understand why we can’t reverse the bad nutritional advice to consume low-fat dairy.
Skeptical Cardiologist: “When we first spoke and I was beginning my investigation into dairy fat and cardiovascular disease you told me that most dairy producers are fine with the promotion of non fat or low fat dairy products because if consumers are choosing low fat or skim dairy this allows the dairy producer to profit from the skim milk production as well as the dairy fat that is separated and sold for butter, cheese or cream products.”
I  don’t have a clear idea of what the economics of this are. Do you think this, for example, doubles the profitability of a dairy?

Dr. Kunz: “Yes, clearly. Butter, sour cream, and ice cream are highly profitable products… All these processes leave a lot of skim milk to deal with, and the best opportunity to sell skim milk is to diet-conscious and heart-conscious people who believe fat is bad.”
Skeptical Cardiologist:” I’ve been baffled by public health recommendations to consume low fat dairy as the science would suggest the opposite. The only reason I can see that this persists is that the Dairy Industry Lobby , for the reason I pointed out above, actually has a vested interest from a profitability standpoint in lobbying for the low fat dairy consumption.. Do you agree that this is what is going on? ”
Dr. Kunz: “Yes, definitely. The obsession with low-fat as it relates to diet and cardiac health has been very cleverly marketed. Fat does NOT make you fat.
Skeptical Cardiologist: “Also, I have had trouble finding out the process of production of skim milk. I’ve come across sites claiming that the process involves injection of various chemical agents but I can’t seem to find a reliable reference source on this. Do you have any information/undestanding of this process and what the down sides might be? I would like to be able to portray skim milk as a “processed food” which, more and more, we seem to be recognizing as bad for us.”
Dr. Kunz: “The PMO pasteurized milk ordinance states that when you remove fat you have to replace the fat soluble vitamins A & D. Apparently the Vitamin A & D have to be stabilized with a chemical compound to keep them miscible in basically an aqueous solution. The compound apparently contains MSG!! We were shocked to find this out and it further confirmed that we did not want to do a reduced fat or skim milk product.”
Skeptical Cardiologist: ” Any thoughts on A2? Marion Nestle’, of Food Politics fame, was recently in Australia where there is a company promoting A2 milk as likely to cause GI upset. It has captured a significant share of the Aussie market.”
Dr. Kunz: “We have heard of this and have directed our farm to test and replace any A1 heterozygous or homozygous cows.  We believe that very few of our herd would have A1 genetics because of the advantage of using heritage breeds like Brown Swiss and Jersey instead of Holstein.  Because few people are actually tested for lactose intolerance and because of the marketing of A2, it’s imperative not to be left behind in this – whether or not it turns out to be a true and accurate cause of people’s GI upset.
Skeptical Cardiologist:” I like that your milk is nonhomogenized. Seems like the less “processing” the better for food.  I haven’t found any compelling scientific reasons to recommend it to my patients, however. Do  you have any?”
Dr. Kunz: The literature is fairly old on this subject, but xanthine oxidase apparently can become encapsulated in the fat globules and it can be absorbed into the vascular tree and cause vascular injury.  I will look for the articles.  Anyway, taking your milk and subjecting it to 3000-5000 psi (homogenization conditions) certainly causes damage to the delicate proteins and even the less delicate fat globules.  Also remember that dietary cholesterol is not bad but oxidized cholesterol is very bad for you. That’s why overcooking egg yolks and high pressure spray drying to make powder products can be very dangerous – like whey protein powders that may contain some fats.
Skeptical Cardiologist: I spend a fair amount of time traveling in Europe and am always amazed that their milk is ultrapasteurized and sits unrefrigerated on the shelves. any thoughts on that process versus regular pasteurization and on pasteurization in general and its effects on nutritional value of dairy.
Dr. Kunz :“Absolutely crazy bad and nutritionally empty.. don’t know why anyone would buy it. The procedure is known as aseptic pasteurization and is how Nestle makes its wonderful Nesquik. If they made a full fat version of an aseptically pasteurized product it may have more oxidized cholesterol and be more harmful than no fat!!”
So there you have it, Straight from the  doctor dairy farmer’s mouth:
Skimming the healthy dairy fat out of  milk is a highly profitable process. Somehow, without a shred of scientific support,  the dairy industry, in cahoots with misguided and close-minded nutritionists, has convinced the populace that this ultra-processed skim milk pumped full of factory-produced synthetic vitamins is healthier than the original product.
Lactosingly Yours
-ACP
The two  recent articles (mentioned in this post) supporting full fat dairy are:

–Circulating Biomarkers of Dairy Fat and Risk of Incident Diabetes Mellitus Among US Men and Women in Two Large Prospective Cohorts
which concluded ‘In two prospective cohorts, higher plasma dairy fatty acid concentrations were associated with lower incident diabetes. Results were similar for erythrocyte 17:0. Our findings highlight need to better understand potential health effects of dairy fat; and dietary and metabolic determinants of these fatty acids
and from Brazilian researchers
Total and Full-Fat, but Not Low-Fat, Dairy Product Intakes are Inversely Associated with Metabolic Syndrome in Adults1