The Pearson Potato Theory of Obesity

The skeptical cardiologist developed “Pearson’s Potato Hypothesis” aka the potato theory of obesity a few years ago but became bogged down in frying oil and never published it.
Now I’m really glad I never got around to finishing my post on the theory-it appears that defenders of the potato are legion and vocal. ConscienHealth points out that a NY Times piece on the dangers of french fries quoted a Harvard epidemiologist  (Eric Rimm) as calling potatoes “starch bombs” and weapons of “dietary destruction.”

Potatoes rank near the bottom of healthful vegetables and lack the compounds and nutrients found in green leafy vegetables, he said. If you take a potato, remove its skin (where at least some nutrients are found), cut it, deep fry the pieces in oil and top it all off with salt, cheese, chili or gravy, that starch bomb can be turned into a weapon of dietary destruction.

The article goes on to recommend portion size control when dealing with French fries and further quoted Rimm:

“There aren’t a lot of people who are sending back three-quarters of an order of French fries. I think it would be nice if your meal came with a side salad and six French fries.”

Apparently the notion of limiting one’s French fries is abhorrent to many and Rimm has been attacked by thousands in the twitter-sphere.
I happen to think he’s right so I’ll go out on a limb here and post the essence of my theory without all the backing references and statistics with which I had hoped to buttress it.

Because potatoes are cheap,  restaurants add lots of them to dishes to make the dishes seem larger and (to some) better and more satiating. Because the potatoes are so gosh darn tasty when sliced up thinly and fried and salted patrons can’t resist eating them even when they are not hungry. Eating any food when you are full is a recipe for….obesity.

To illustrate this issue I’ve started noting what restaurants serve along with the main dish that I’m interested in.
The vast majority of time breakfast orders come with fried potatoes like those below that came with the egg dish that I ordered. 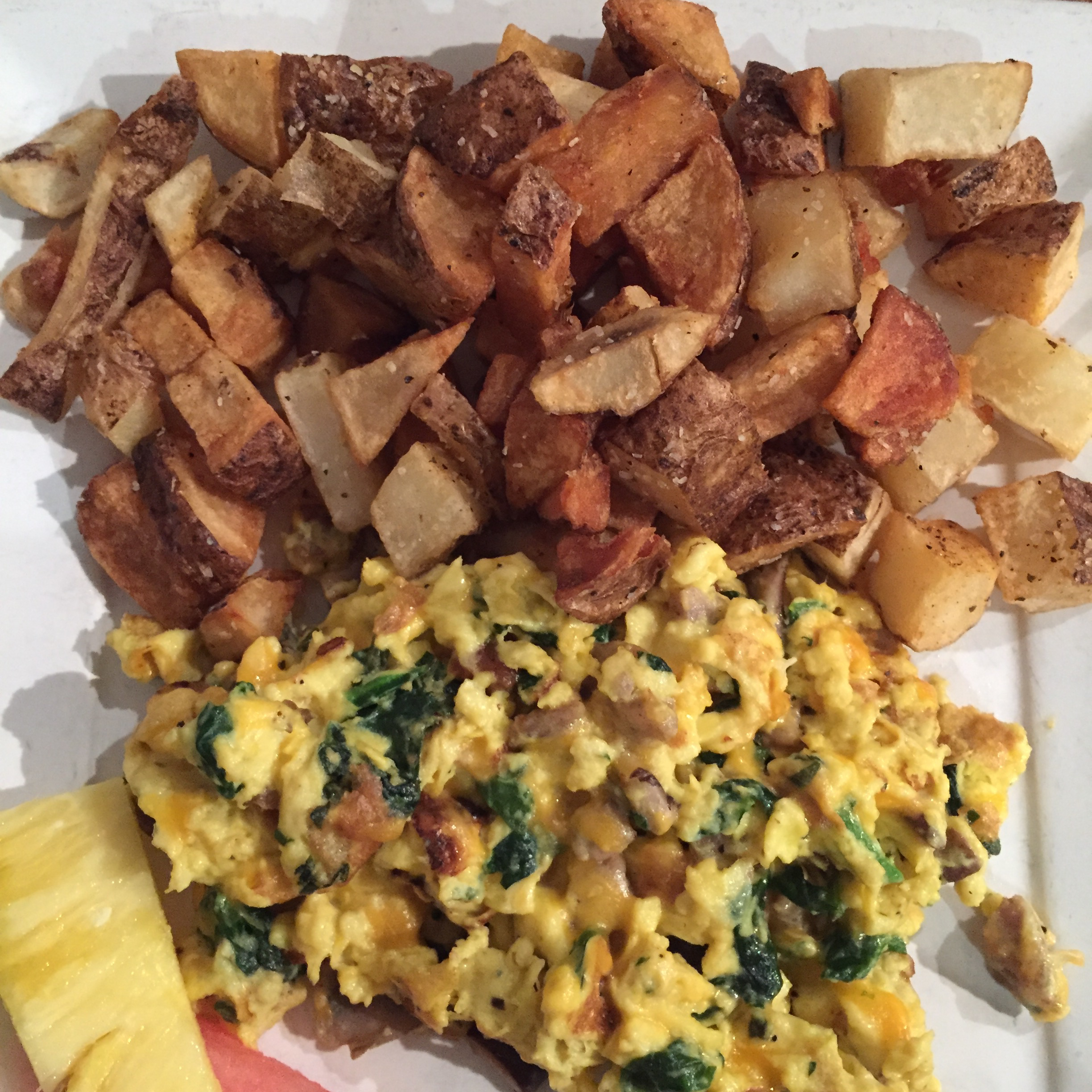 I was sorely tempted to eat all these fried potatoes although full from my egg dish because when cooked properly the combination of the crispy fat, salt and warm fluffy potato interior is irresistible. Instead I ate just a few and put the rest in a to-go box, took them home, weighed them on a scale and took this picture. 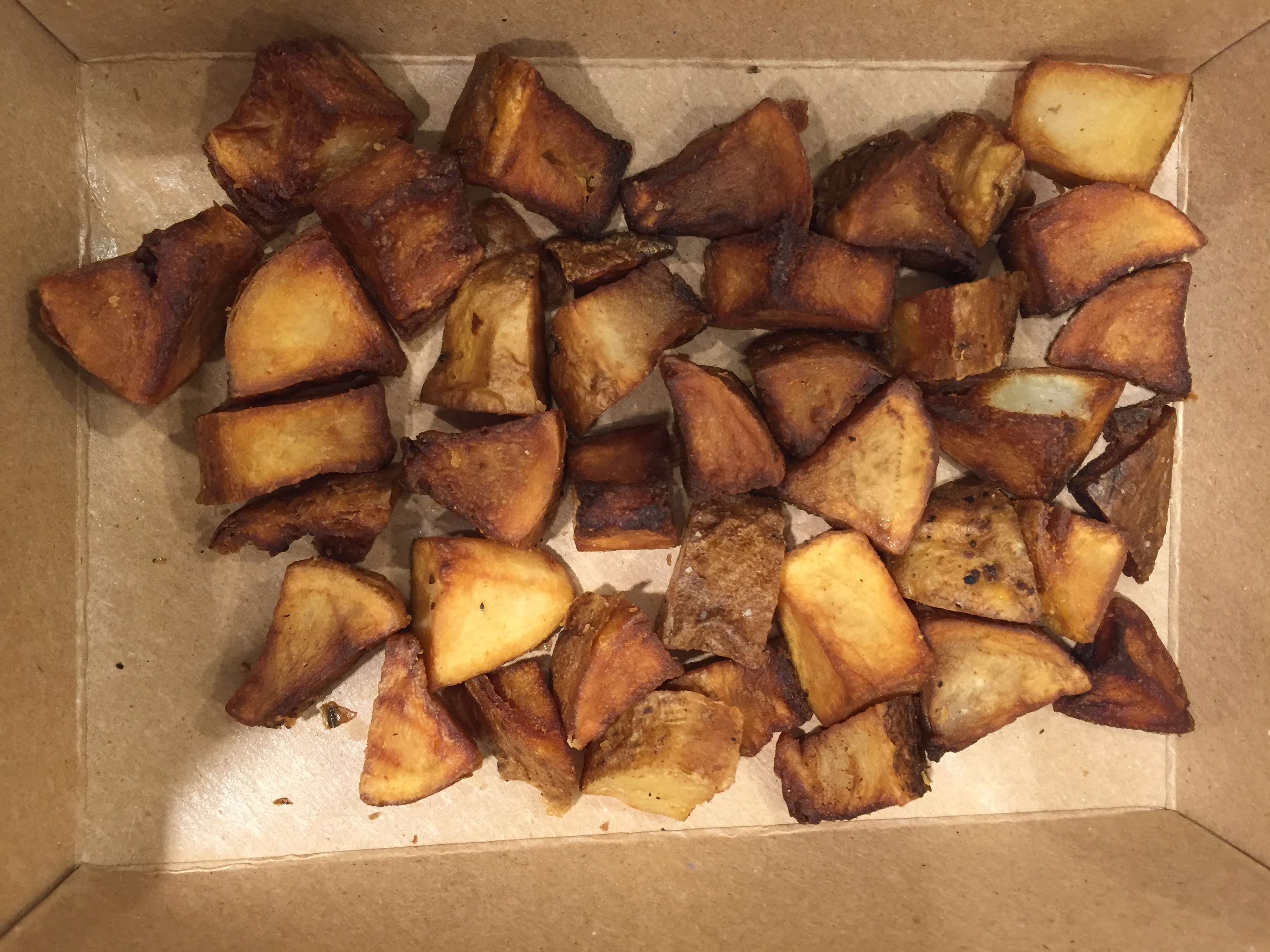 Interestingly, the weight of the potatoes that I had not consumed was 150 grams which is roughly equivalent to a large order of fries at McDonald’s. A large order of McDonald’s fries gives you 500 calories with 66 grams of carbohydrates,.
Thus, if I had not been disciplined that morning I likely would have ended up consuming more calories in fried potatoes than the main dish and over half of the calories I consume in a typical full day.
French fries (and their (equally addictive to me) cousin the potato chip) are the side for almost all hamburgers and sandwiches served in the US thus the possibility of unintended excess starch bomb consumption extends from breakfast to lunch to dinner in meals consumed outside the home.

In 2015 I pointed out that sweet potatoes which are embraced by nutrition experts are very similar nutritionally to potatoes.
A serving of either one provides 37 grams of carbohydrates and 4 grams of protein. Sweet potatoes have more fiber ( 6 grams vxs 4 grams) but more sugars (12 grams vs 2 grams.)
The Harvard School of Public health has decided potatoes are not a vegetable:

“However, potatoes don’t count as a vegetable on Harvard’s Healthy Eating Plate because they are high in carbohydrate – and in particular, the kind of carbohydrate that the body digests rapidly, causing blood sugar and insulin to surge and then dip (in scientific terms, they have a high glycemic load).”

but gives sweet potatoes a pass.
If sweet potatoes were as ubiquitous as potatoes and became a staple of fast food restaurants and a side for any and all dishes (and if they were separated out from the rest of the vegetable world), I suspect they would also be associated with weight gain.
If, on the other hand, potatoes were not markers of fast, tasty, and easily prepared and consumed food and were only eaten at trendy locavore restaurants or prepared at home, I think they would no longer be associated with obesity.
So, yes it does make sense to ask for a side salad and limit your fries to six (or perhaps seven on days of debauchery) in place of the typical mountain of potato if you are seeking weight loss.
Spudlimitingly Yours,
-ACP

5 thoughts on “The Pearson Potato Theory of Obesity”