In 2010 President Obama signed into law the “Healthy, Hunger-free kids  act (HHKA) of 2010” which funded child nutrition programs and free school lunch programs in schools. New nutrition standards for schools were a point initiative of then First Lady Michelle Obama as part of her fight against childhood obesity and her “Let’s Move” initiative.
In May of 2017, President Trumps’s new secretary of agriculture, Scotty Perdue, issued a proclamation (Entitled Ag Secretary Perdue Moves To Make School Meals Great Again) which pledgee to loosen some of Obama’s school nutrition standards with respect to whole grains, salt and milk.
These changes have been finalized recently and have received considerable criticism. For example, Vox’s Julia Belluz wrote a piece entitled  “The Trump administration’s tone-deaf school lunch move” with a subtitle implying that the USDA’s loosening of standards would contribute to already soaring childhood obesity rates.
Belluz summarized the changes

Criticism of the loosening implies that the original school lunch standards were appropriate and based on state of the art nutritional science, but were they?
The HHKA relied on guidance from the Institute of Medicine which established a committee to put together its report which was published in 2009 and was heavily based on the scientific guidance provided in the 2005 Dietary Guidelines for Americans and the IOM’s Dietary Reference Intake books”
Unfortunately, the 2005 Dietary Guidelines for Americans were not privy to  dramatic changes in our understanding of nutritional science which have occurred in the 13 years since they were written.
The IOM report copied the 2005 DGA in recommending the consumption of low fat or non fat dairy and defined low fat as 1%.
To achieve its aim of reducing saturated fat intake to <10% the IOM chose to force schools to only utilize low fat or skim milk. 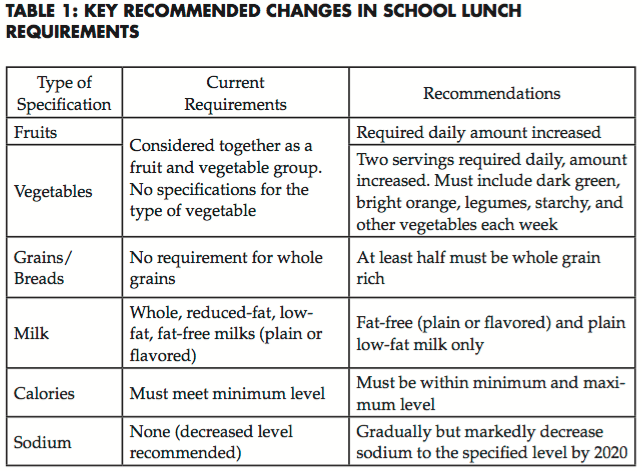 The IOM and school lunch program recommended eliminating whole milk entirely and only allowing
-fat-free (plain or flavored) or
-plain low-fat (meaning 1%) milk
In 2018 it is very clear to anyone who examines the relevant data (see here, here and here) that dairy fat, despite being predominantly saturated fat is not associated with higher rates of cardiovascular disease, obesity, diabetes or total mortality.
A 2013 editorial in JAMA Pediatrics from Ludwig and Willet challenged recommendations for children to consume 3 glasses of low fat or non fat milk daily and noted:

Therefore, one of the key components of the HHK is misguided and not science-based.  It has in effect committed all of our children to a vast experiment with unknown health consequences.

The change the USDA recently announced is to allow flavoring in 1% milk. Perdue is quoted as saying:

Because milk is a critical component of school meals, and providing schools with the discretion to serve flavored, 1 percent fat milk provides more options for students selecting milk as part of their lunch or breakfast, I am directing USDA to begin the regulatory process to provide that discretion to schools.

Prior to the mandated changes, the IOM report noted that dairy intake in children was predominantly from milk with >1% dairy fat.

The dairy industry basically demanded the right to flavor 1% milk because the mandate to force all school children to drink low fat or skim milk has resulted in less children drinking milk.
And the government’s solution to making unpalatable skim milk tastier to children is to add sugar, something we have learned in the last decade we should not be doing to our food.
As Ludwig and Willet noted:

Consumption of sugar-sweetened, flavored (eg, chocolate) milk warrants special attention. While limit ing whole milk, some healthy beverage guidelines con done, and many schools provide, sugar-sweetened milk, with the aim of achieving recommended levels of total milk consumption in children. Not surprisingly, children prefer sweetened to unsweetened milk when given the choice, leading to a marked increase in the proportion of sweetened milk consumption in recent years. This trend may reflect, to some degree, compensation for the lower palatability and satiety value of fat-reduced milk. However, the substitution of sweetened reduced-fat milk for unsweetened whole milk—which lowers saturated fat by 3 g but increases sugar by 13 g per cup—clearly undermines diet quality, especially in a population with excessive sugar consumption.

The bulk of the dairy industry actually prefers you and your children drink skim milk (see here) and they are happy to adulterate the tasteless, nutritionless beverage with anything that makes it more palatable.
Witness this quote from AgWeb:

This is great news, not only for dairy farmers and processors, but also for schoolkids across the U.S.,” says John Rettler, president of FarmFirst Dairy Cooperative. “This is a step in the right direction in ensuring that school cafeterias are able to provide valuable nutrition in options that appeal to growing children’s taste buds. Their good habits now have the potential to make them lifelong milk-drinkers.”

Adding sugar to mandated unpalatable low fat milk might increase consumption of the beverage but it is definitely not a  step forward for our kid’s health.
This unethical, unscientific experiment might be contributing already  to higher rates of childhood obesity and diabetes.
Making Skepticism Great Again,
-ACP

N.B. To help understand how skim milk despite having less calories than whole milk could actually worsen obesity Ludwig and Willet provide the following instructive  paragraph:

Suppose a child, who habitually consumes a cup of whole milk and two 60-kcal cookies for a snack, instead had nonfat milk. Energy intake with that snack would not decrease if that child felt less satiated and consequently ate just  extra cookie. Rather than weight loss, this substitution of refined starch and sugar (ie, high glycemic index carbohydrate) for fat might actually cause weight gain. Consumption of a low-fat, high glycemic index diet may not only increase hunger, but also adversely affect energy expenditure compared with diets with a higher proportion of fat. In an analysis of 3 major cohorts, high glycemic index carbohydrates, such as refined grains, sugary beverages, and sweet desserts, were positively associated with weight gain, whereas whole milk was not. Of particular relevance, prospective studies in young children, adolescents, and adults observed the same or greater rates of weight gain with consumption of reduced-fat compared with whole milk, suggesting that people compensate or overcompensate for the lower calorie content of reduced-fat milk by eating more of other foods.