How Important Are Grapefruit (OR CBD Oil)-drug Interactions? David Bailey vs The Florida Dept. of Citrus

Previously, the skeptical cardiologist described a patient  with atrial fibrillation who was taking the blood thinner apixaban (Eliquis ) and developed a nose bleed after consuming a large amount of grapefruit (see here.)
In researching the whole subject of grapefruit-drug interactions I came across a fascinating intellectual battle between David Bailey, the researcher who first identified a significant grapefruit-drug interaction, and clinicians and researchers, some of whom are supported by the Florida Citrus Board, who feel this interaction is not significant.

What Does The Internet Tell Us?

It’s always interesting to see what patients doing a Google search will see on important medical topics. When I Googled  “grapefruit Eliquis interaction” I saw the following: 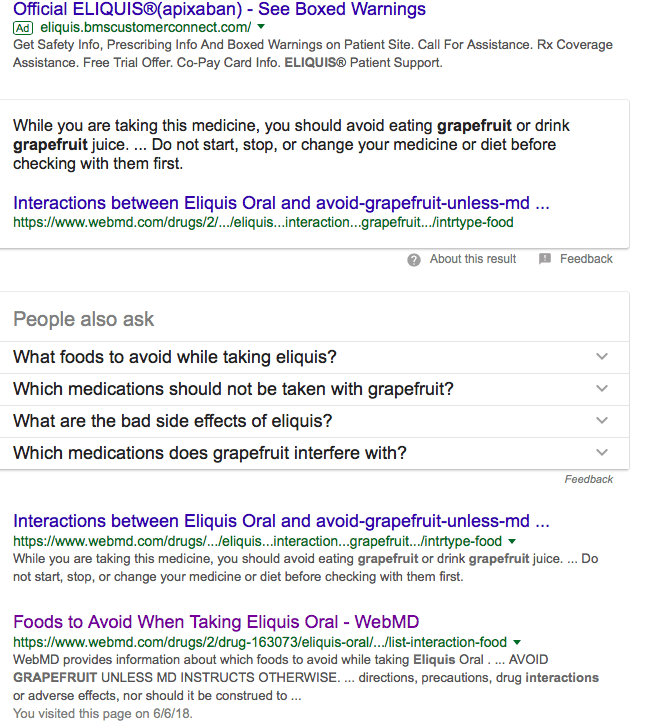 The first item is an ad from the company that makes Eliquis which takes you to their patient-oriented Eliquis site and immediately presents you with important patient safety information. Nowhere on the site is the word grapefruit listed (as of July, 2018).
The second item is what Google calls a snippet and which they will present to you as what they think is the best answer to your Google search question. In this case the snippet  (and the first 4 hits) is lifted from Web MD an absolutely unreliable source of information (see my post on entitled Web Md:Purveyor of bad health information and snake oil) but one which Google (and thus millions of unsuspecting Googlers) relies on for answers to medical questions . Web MD advises you to avoid grapefruit if you’re taking eliquis.
Close inspection of the WebMD article proffering this advice reveals the sole reference that actually bears on this topic: (Bailey et al , 2012 , CMAJ).
The main author of this paper (which has  the oddly phrased title Grapefruit–medication interactions: Forbidden fruit or avoidable consequences? ) is David Bailey.

David Bailey may be  better  known as the first Canadian to run a mile in under 4 minutes. His Wikipedia entry spends equal time on his running career and on his major claim to fame: grapefruit drug interactions (GDI).
Bailey serendipitously discovered that grapefruit increased levels of the antihypertensive drug felodipine in his own body in 1987,  information which was pretty much ignored until he published a research paper in the Lancet in 1991 showing a doubling of felodipine levels in 6 volunteers who consumed grapefruit.
Since then studies have shown that grapefruit juice  acts by reducing presystemic felodipine metabolism through selective post-translational down regulation of cytochrome P450 3A4 (CYP3A4) expression in the intestinal wall.
Bailey has taken the grapefruit (and Seville orange) ball and run with it. His publications emphasize the broad scope and potential dangers of multiple grapefruit-drug interactions.  A 2012 Bailey paper  lists 85 drugs with the potential to interact with grapefruit juice including, you guessed it, apixaban.
Despite these potential interactions the actual number of clinically significant interactions or harm reported is minuscule. This has not deterred Bailey from emphasizing the importance of the interaction he discovered.
He is  quoted in a 2012 NY Times article as saying:
“The bottom line is that even if the frequency is low, the consequences can be dire,” he said. “Why do we have to have a body count before we make changes?”

“For 43 of the 85 drugs now on the list, consumption with grapefruit can be life-threatening, “

What Can We Learn From The Florida Department of Citrus?

In fact, in a letter to the editor in response to Bailey’s 2012 review, two researchers point out that their is little solid evidence to suggest that the grapefruit-drug interactions are important

We know of no validated evidence that coadministration of grapefruit juice with a drug has caused a dangerous interaction, resulting in serious adverse effects or actual harm to a patient’s health. We point readers to 2 extensive review articles on grapefruit juice–drug interactions that have appeared in peer-reviewed medical literature.2,3 These articles provide a review of primary research literature, a compilation of the extent of interactions with specific drugs, and an evaluation of their clinical importance; however, neither of these publications is cited in the CMAJ article.

Whereas David Bailey has a bias to promote and exaggerate an interaction that is his claim to scientific fame most of the research and reviews that counter his claims come from researchers who are likely heavily biased to minimize the importance of the interaction: they are funded by the Florida Department of Citrus.

David Bailey would like  us to believe that the GFDI he identified in 1998 is hugely important. If only doctors would spend more time investigating the grapefruit consumption of their patients we would realize this.  He writes

But how big a problem are such interactions? Unless health care professionals are aware of the possibility that the adverse event they are seeing might have an origin in the recent addition of grapefruit to the patient’s diet, it is very unlikely that they will investigate it. In addition, the patient may not volunteer this information. Thus, we contend that there remains a lack of knowledge about this interaction in the general health care community. Consequently, current data are not available to provide an absolute or even approximate number representing the true incidence of grapefruit–drug interactions in routine practiceThe chemicals in grapefruit involved in this interaction are the furanocoumarins.7

Bailey, goes on to warn us that all forms of grapefruit consumption can lead to dangerous interactions and other citrus fruits are to be feared as well

Because these chemicals are innate to grapefruit, all forms of the fruit (freshly squeezed juice, frozen concentrate and whole fruit) have the potential to reduce the activity of CYP3A4. One whole grapefruit or 200 mL of grapefruit juice is sufficient to cause clinically relevant increased systemic drug concentration and subsequent adverse effects.11,12 Seville oranges, (often used in marmalades), limes and pomelos also produce this interaction.13–15 Varieties of sweet orange, such as navel or valencia, do not contain furanocoumarins and do not produce this interaction.2

You can follow his references but they are not to patients who were harmed by grapefruit-drug interactions. Indeed, I am unaware of any of my patients reporting such harm until my patient with the nose bleed. I tend to agree with this unbiased editorial from BMJ in 2013

In our experience, and in that of our experienced colleagues, we have yet to come across clinically meaningful interactions of drugs and GFJ. This is despite our day to day experience of managing patients on statins, calcium channel antagonists, anti-platelet agents and anti-arrhythmics, which covers over 10,000 patients in the last 10 years alone. Likewise, there is little formal evidence of an impact, even from large scale clinical trials, with adjudicated and well documented endpoints.

After considerable research and communication with Pfizer, the maker of Eliquis, I ended up agreeing with Pfizer’s conclusion that the grapefruit-Eliquis interaction was unlikely to be significant:

When consumed in usual dietary volumes, grapefruit juice is considered a moderate inhibitor of CYP3A4. Therefore a dose adjustment of apixaban is not expected to be required.

I was reminded of the grapefruit-drug interaction in the last few weeks as several of my patients have started using CBD oil for various problems and have asked if it is safe to use with their cardiac medications.
I haven’t fully researched the CBD oil-drug interaction but the top Google search (“grapefruit and CBD oil”) result (from CBD school)  states the following:

CBD interacts with other medications in your body in the same way as grapefruit, only even stronger.

However, the site that CBD school references (Project CBD) is not that definitive about grapefruit-drug interactions being a guide to CBD-grapefruit interactions.
And a recent scholarly article on the topic (see here) concludes

The drug-drug interactions between cannabinoids and various drugs at the CYP level are reported, but their clinical relevance remains unclear.

Which sounds very similar to where we are at with grapefruit-drug interactions in general.

I had my patient perform an experiment to see if the grapefruit actually caused her nose bleed. She repeated her consumption of large amounts of grapefruit and had no nosebleed this time.
Nonepistaxisly Yours,
-ACP

1 thought on “How Important Are Grapefruit (OR CBD Oil)-drug Interactions? David Bailey vs The Florida Dept. of Citrus”