Jellyfish Memory Supplement Prevagen Is A "Clear-Cut Fraud" According To The FTC: Stop Buying This And Other Useless Brain Supplements

A JAMA viewpoint article entitled “The Rise of Pseudomedicine for Dementia and Brain Health ” caught my eye recently and I immediately thought of the widely advertised,  jellyfish-derived and totally useless supplement,  Prevagen.
The  article, written by three prominent neurologists and dementia researchers at UC San Francisco, discusses the lack of science behind the $3.2 billion  industry promoting unproven supplements for improved cognition and  brain health.
Unproven supplements like Prevagen (made from jellyfish! and with a hard to pronounce crucial ingredient!) utilize a facade of “proven benefits” and succeed by promoting themselves as science-backed on radio, television and the internet.
The JAMA articles notes that this industry thrives due to the increasing prevalence of Alzheimer’s disease, and it’s lack of effective treatments.
Consumers, it goes on to say,  who are intent on finding methods to prevent dementia need to know three things:

The Facade of Science-Backed Research.

Companies like Quincy Bioscience, the maker of Prevagen,  utilize sophisticated techniques that supply false scientific backing for brain health interventions.
The website for Prevagen states “prevagen improves memory” and “has been clinically shown to help with mild memory loss associated with aging.”
A tab promises to show the research behind this claim:

As the JAMA articled pointed out, these bogus brain supplement companies quote scientific articles which appear valid yet lack essential  features such as “sufficient participant characterization, treatment randomization and fail to include limitations.”  These bad papers are often published in predatory open access journals.
In the case of Prevagen, despite marketing which includes “The Science Behind Prevagen” there isn’t even a single study published  in the peer-reviewed scientific literature, predatory or otherwise. 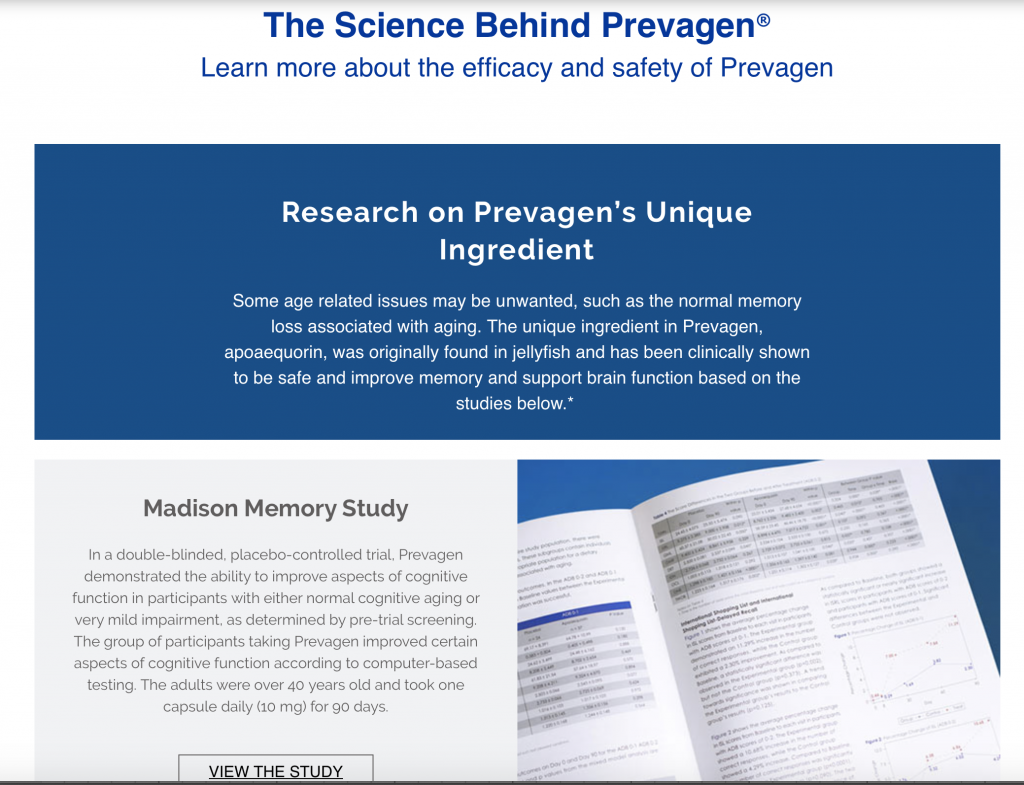 According to the Federal Trade Commission (FTC), which charged Quincy Bioscience with false and deceptive advertising in 2017, the initial version of this company study found that Prevagen was no more effective than a placebo at improving any of the nine cognitive skills, including memory, that the company measured.

“The marketing for Prevagen is a clear-cut fraud, from the label on the bottle to the ads airing across the country,” said New York Attorney General Eric Schneiderman. “It’s particularly unacceptable that this company has targeted vulnerable citizens like seniors in its advertising for a product that costs more than a week’s groceries, but provides none of the health benefits that it claims.”

“The marketers of Prevagen preyed on the fears of older consumers experiencing age-related memory loss,” said Jessica Rich, director of the FTC’s Bureau of Consumer Protection. “But one critical thing these marketers forgot is that their claims need to be backed up by real scientific evidence.”

Since then Quincy went back and “re-analyzed” their in-house data coming up with 3  parameters that improved and challenging the FTC in court. This process is called p-hacking and any significant findings gathered through this process are highly suspect.
A great article on the Prevagen case from the McGill University Office  of Science and Society summarizes the problems with this re-analysis.

This is an after-the-fact, unplanned exploration of the data to see if anything else of interest happened in the trial. Some might call it a fishing expedition. Scientists do this all the time, but with a big caveat: post hoc results are considered tentative, not conclusive. Before they’re accepted as valid outcomes, they need to be confirmed by additional studies.
That’s because random events happen all the time in scientific studies. Some of them may seem statistically significant, but they’re flukes and not the result of cause-and-effect.  And the more post hoc analyses you do (like the more than 30 Quincy Bioscience did), the more likely you’ll encounter these chance results.
Scientists guard against accepting them as real by setting a high bar for statistical significance and by not accepting post hoc findings until they’ve been tested again.

Despite the total lack of proven efficacy and the  lawsuit  by the FTC the company continues to heavily market Prevagen and reap millions of dollars in profits from the gullible. Prevagen is sold at the pharmacies of the companies below which should immediately remove this snake oil if their aim is to help consumers.

Anamnestically Yours,
-ACP
For more in-depth analysis see below.
Jann Bellamy at Science-Based Medicine delves deeply into the case and cases against Prevagen in “Prevagen goes P-hacking.”

And see here for the McGill University office of Science and Society: Separating Sense From Nonsense

5 thoughts on “Jellyfish Memory Supplement Prevagen Is A "Clear-Cut Fraud" According To The FTC: Stop Buying This And Other Useless Brain Supplements”