Supporters of vegetarian/ultra low fat diets like to claim that there is solid scientific evidence of the cardiovascular benefits of their chosen diets.

To buttress these claims they will cite the studies of Esseslystn, Pritikin and Ornish.

I’ve previously discussed the bad science underlying the programs of Esselsystn and Pritikin but have only briefly touched on the inadequacy of Dean Ornish’s studies.

The Ornish website proclaims that their program is the first program “scientifically proven to undo (reverse) heart disease.” That’s a huge claim. If it were true, wouldn’t the Dietary Guidelines for Americans, the American Heart Association, and most cardiologists and nutrition experts be recommending it?

Who Is Dean Ornish?

Dean Ornish has an MD degree from Baylor University and trained in internal medicine but has no formal cardiology or nutrition training (although many internet sites including Wikipedia describe him as a cardiologist.)

Ornish, according to the Encyclopedia of World Biographies became depressed and suicidal in college and underwent psychotherapy “but it was only when he met the man who had helped his older sister overcome her debilitating migraine headaches that his own outlook vastly improved. Under the watch of his new mentor, Swami Satchidananda, Ornish began yoga, meditation, and a vegetarian diet, and even spent time at the Swami’s Virginia center.”

After his medical training Ornish founded the Preventive Medicine Research Institute and has has widely promoted his Ornish Lifestyle Program.  the website of which claims:

The Ornish claims are based on a study he performed between 1986 and 1992 which originally had 28 patients with coronary artery disease in an experimental arm and 20 in a control group. You can read the details of the one year results here.and the five year results here.

There are  so many limitations to this study that the mind boggles that it was published in a reputable journal.

If this were truly a 1:1 randomization the numbers would be equal and the baseline characteristics equal.

Only 23 of the 53 assigned to the experimental group agreed to participate and only 20 of the control group.

The control group was older, less likely to be employed and less educated.

“The primary reason for refusal in the experimental group was not wanting to undergo intensive lifestyle changes and/or not wanting a second coronary angiogram; control patients refused primarily because they did not want to undergo a second angiogram.”

Needless to say this was not blinded and the researchers definitely knew which patients were in which group.

Control-group patients were “not asked to make lifestyle changes, although they were free to do so.”

There is very little known about the 20 slackers in the control group. I can’t find basic information about them-crucial things like how many smoked or quit smoking or how many were on statin drugs.

Progression or regression of coronary artery lesions was assessed in both groups by quantitative coronary angiography (QCA) at baseline and after about a year.

QCA as a test for assessing coronary artery disease has a number of limitations and as a result is no longer utilized for this purpose in clinical trials. When investigators  want to know if an intervention is improving CAD they use techniques such as intravascular ultraound or coronary CT angiography (see here) which allow measurement of total atherosclerotic plaque burden.

Rather than burden the reader  with the details at this point I’ve included a discussion of this as an addendum.

Ornish has widely promoted  this heavily flawed study as showing “reversal of heart disease” because at one year the average percent coronary artery stenosis by angiogram had dropped from 40% to 37.8% in the intensive lifestyle group and increased from 42.7% to 46.1% in the control patients.

In other words even if we overlook the huge methodologic flaws in the study the  so-called  “reversal” was minuscule.

Utlimately, dropping coronary artery blockages by <5 % doesn’t really matter unless that is also helping to prevent heart attacks or death or strokes or some outcome that really matters.

There were no significant differences between the groups at 5 years in hard events such as heart attack or death.
In fact 2 of the experimental group died versus 1 of the control group by 5 years.

There were less stents and bypasses performed in the Ornish group but the decision to proceed to stent or bypass is notoriously capricious when performed outside the setting of acute MI. The patients in the experimental group under the guidance of Ornish and their Ornish counselors would be strongly motivated to do everything possible to avoid intervention.

I’ve gotten a lot of flack for humorously suggesting that Nathan Pritikin killed himself as a result of the austere no fat diet he consumed but the bottom line on any lifestyle change is both quality and quantity of life.

It is a trial of multiple different interventions with frequent counseling and meetings to reinforce and guide patients.

The interventions included things that we know are really important for long term health-regular exercise, smoking cessation, and weight management. These factors alone could account for any differences in the outcome but they are easily adopted without becoming a vegetarian.

The patients who agreed to the experimental arm were a clearly highly motivated bunch who agreed to this really strict regimen. Even in this population there was a 25% drop out rate.

Since investigators clearly knew who the “experimental patients” were and they were clearly interested in good outcomes in these patients there is a high possibility of bias in reporting outcomes and referring for interventions.

Despite all the limitations the study does raise an interesting hypothesis. Should we all be eating vegan diets?

if Ornish really wanted to scientifically prove his approach he should have repeated it with much better methodology and much larger numbers.

Finally, this tiny study has never been reproduced at any other center.

Because of the small numbers, lack of true blinding, lack of hard outcomes and use of multiple modalities for lifestyle intervention, this study cannot be used to support the Ornish/Esselstyn/Pritikin dietary approach.

It most certainly doesn’t show that the Ornish Lifestyle Program “reverses heart disease.” Consequently, you will not find any evidence-based source of nutritional information or guideline (unless it has a vegan/vegetarian philosophy or is being funded by the Ornish/Pritikin lifestyle money-making machines) recommending these diets.

N.B.1 A recent paper on noninvasive assessment of atherosclerotic plaque has a great infographic which shows how coronary artery disease progresses and how and when in the progression various imaging modalities are able to detect plaque: 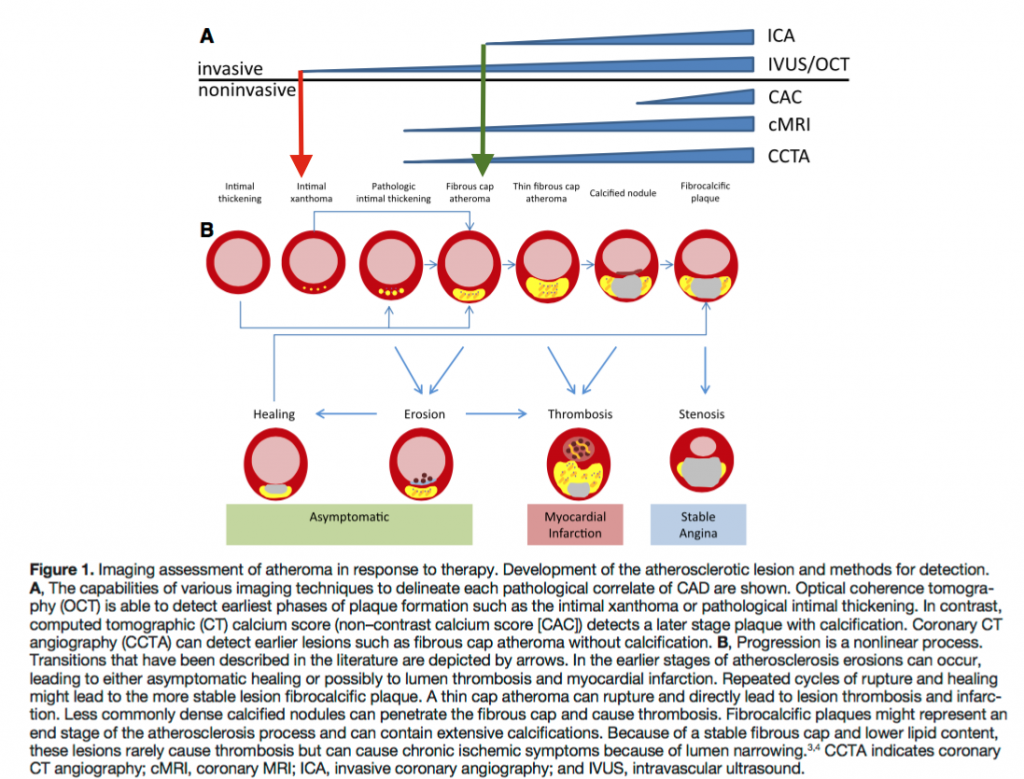 I’ve inserted a vertical red arrow which shows how IVUS detects very early atheroma whereas angiography (ICA, green line) only detects later plaque when it has started protruding into the lumen of the artery.

The paper notes that “Intravascular ultrasound (IVUS)  constitutes the current gold standard for plaque quantification. Multiple studies using IVUS and other techniques have revealed a robust relation between statin therapy and plaque regression. In the ASTEROID trial coronary atheroma volume regressed by 6.8% during 24 months of high-intensity lipid therapy. A meta-analysis of IVUS trials including 7864 patients showed an association between plaque regression and decreased cardiovascular events.”

While I believe Ornish started off as a legitimate scientist several authors have pointed out that he has joined the ranks of pseudoscientific practiioners.

Here’s one analysis from Science Blogs :

In the end, the problem is that Dr. Ornish has yoked his science to advocates of pseudoscience, such as Deepak Chopra and Rustum Roy. Why he’s done this, I don’t know. The reason could be common philosophy. It could be expedience. It could be any number of things. By doing so, however, Dr. Ornish has made a Faustian deal with the devil that may give him short-term notoriety now but virtually guarantees serious problems with his ultimately being taken seriously scientifically, as he is tainted by this association. Let me yet again reemphasize that this relabeling of diet, exercise, and lifestyle as somehow being “alternative” is nothing more than a Trojan Horse. Inside the horse is a whole lot of woo, pseudoscience and quackery such as homepathy, reiki, Hoxsey therapy, acid-base pseudoscience, Hulda Clark’s “zapper,” and many others,