Thank You, America, From A Non-Refugee Immigrant

This being July 4,  the skeptical cardiologist is reminded of how much he owes the United States for allowing him to become a legal citizen and resident. I asked my sister, Vickie, who emigrated with me from England in 1959 what she was thankful for in the United States and she texted back:

The opportunities this country gives so many refugees. I am friends with so many that love the USA for the freedom we have and wonderful people who have supported them! Thanks for asking!

The US  has been kind to refugees in the past, especially around the time my family immigrated to the US in the late 1950s.

In January of 1959, Fidel Castro overthrew Batista in Cuba and, thousands of Cubans were  admitted to the US as political refugees. Eventually, all these Cubans were made US citizens.

The United States eventually enacted the 1966 Cuban Adjustment Act to allow permanent resident status to Cuban refugees who arrivee after 1959. About one million Cubans emigratee to the United States between 1959 and 1990.

Given recent turmoil surrounding immigrants and immigration I felt compelled to look back on what the immigration process looked like when I entered the US.

The process of my gaining citizenship began in 1959 when my dad and mom decided to emigrate from England and come to the United States.

The Immigration and Nationality Act of 1952 made it easy for us to come here because  it  “(1) reaffirmed the national origins quota system, (2) limited immigration from the Eastern Hemisphere while leaving the Western Hemisphere unrestricted, (3) established preferences for skilled workers and relatives of U.S. citizens and permanent resident aliens; and (4) tightened security and screening standards and procedures.”

Decisions on who to allow into the country it seems have long been a source of controversy as this summary of post-world war II US immigration policy makes clear. The 1952 Immigration Act under which we entered  ended policies dating from the 1890s that excluded Asian immigrants. However, only 100 immigrants from each country in Asia were allowed.

The bill upheld the ethnicity-based quota system for new immigrants that favored white Europeans, revising limitations to admit one-sixth of 1 percent of each group already in the United States.

Under the 1952 act my family was welcomed into the US. When my dad visited the American consulate in Liverpool he was told he was a shoe-in since he was a white European who was trained as a chemist. In addition, my mother’s sister resided in the U.S.A. (Coffeyville, Kansas to be exact).

I Become A Citizen

In 1968, after 9 years in America, my parents were sworn in as United States Citizens.

It was at that time that I became naturalized under section 341 of that 1952 Immigration Act which allowed children under the age of 18 to become citizens when their parents had passed all the citizenship requirements and were sworn in. 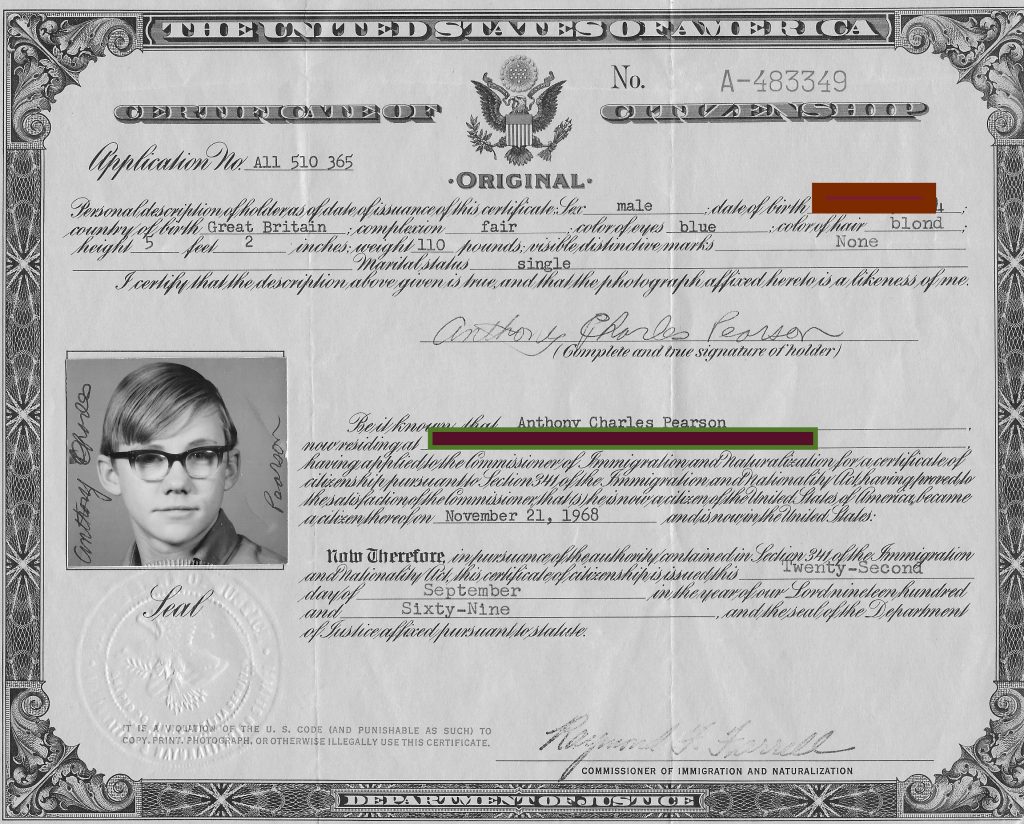 There is so much that I take for granted in the US. I feel like  even the poorest Americans are better off  than 99.9% of the people who have ever lived. The framers of the US constitution were really brave, insightful men and that first amendment is something I am profoundly grateful for.

Amendment I. Congress shall make no law respecting an establishment of religion, or prohibiting the free exercise thereof; or abridging the freedom of speech, or of the press; or the right of the people peaceably to assemble, and to petition the government for a redress of grievances.

I won’t bore you with a long list of other great things about the US (like free public bathrooms and high doctor salaries) but will end with a paean to the great National Park System which has preserved the beauty and the wildness of vast swaths of unique areas across the continent.

I have taken my family hiking in as many of these wonders as time allowed: Zion, Rocky Mountain, Bryce, Yosemite, Great Smoky Mountains, Grand Canyon, Yellowstone, Grand Tetons, US Virgin Islands and Saguaro.

My first paean to the national park system was at the end of my Saguaro post:

Since my kids became old enough to appreciate hiking and nature I have tried to focus family vacations on visits to National parks. I can’t think of any more valuable experience for them than hiking in some of the most beautiful places on earth and experiencing diverse and fascinating flora and fauna.  And all of this comes at a ridiculously low price for the user.

For example, because I’m 62 years old I qualify for a Lifetime senior pass to all National parks and monuments. Cost? 10$!!!! I’m finally seeing the perquisites of becoming a senior citizen.

I sure hope the vision of prior Presidents, Congressman and ardent conservationists (all praise be to Teddy Roosevelt!) who established the federal system that protects these national treasures continues.

8 thoughts on “Thank You, America, From A Non-Refugee Immigrant”