Are You Taking A Statin Drug Inappropriately Like Eric Topol Because of the MyGeneRank App?

The skeptical cardiologist was listening to a podcast discussion between Sam Harris and Eric Topol recently and became  flabbergasted.
Topol, the “world-renowned cardiologist” who is seemingly everywhere in media these days was discussing what he considers the overuse of imaging technology during the podcast which Harris’s website describes as follows:

In this episode of the Making Sense podcast, Sam Harris speaks with Eric Topol about the way artificial intelligence can improve medicine. They talk about soaring medical costs and declining health outcomes in the U.S., the problems of too little and too much medicine, the culture of medicine, the travesty of electronic health records, the current status of AI in medicine, the promise of further breakthroughs, possible downsides of relying on AI in medicine, and other topics.

Personally, I have been amazed at the hype and promotion that artificial intelligence (AI) has been getting given the near total absence in cardiology of any tangible benefits from it and I wanted to hear what the man who wrote ” Deep Medicine: How Artificial Intelligence Can Make Healthcare Human Again ” had to say about it.
About 28 minutes into the podcast, Harris, who has lately been preoccupied with promoting meditation as a cure for all ills, begins describing a procedure he underwent:

Harris, who in neuroscience and philosophy might speak precisely, here is very vague. Did he get a coronary calcium scan (CAC) or a coronary CT angiogram? There is a huge difference and he is conflating the two imaging procedures.
Apparently he is unhappy with having undergone it but:

I might be telling a different story if my life was saved by it.

And his doctor’s rationale  for getting the scan was lacking:

The way this was dispensed to me. We now have this new tool, let’s use it.

Let me just say at this point that if your doctor’s rationale for performing a test is that he has a machine that performs the test just say no. Or demand an explanation of how the results will change your management or prognosis.
Apparently the scan that Harris had didn’t turn out either horrifically worse than expected or remarkably better and didn’t change management:

In my case at the end it didn’t make sense.

Now, I can forgive Sam Harris for being somewhat naive and misguided when it comes to coronary artery scans or coronary CT angiograms but Eric Topol , the world’s leading talking cardiology head should fully understand the value of coronary artery calcium scans.
This is where I first become flabbergasted.
Topol says in response at this point that coronary artery calcium scans are “terribly overused” and that “I’ve never ordered one.”
Eric, you cannot be serious!
Are you telling me that you wouldn’t order one on your 60 year old airline pilot friend whose father dropped dead of a massive MI at age 50 but whose lipids look fine?
Why doesn’t Eric order CACs?
Because “There are so many patients who have been disabled by the results of their calcium score even though they have no symptoms.”
This is where the degree of my flabbergastment increased by an order of magnitude.
Our job as preventive cardiologists is to identify those at high risk and lead them to lifestyle choices and medicine that dramatically lowers that risk.  We educate them that the large build up of subclinical atherosclerosis we identified does not have to result in sudden death, crippling heart attacks or strokes. We reassure them that with the right tools we can help them live a long, productive and happy life.
Eric, what do you tell these people? The calcium score is irrelevant? You’re fine. You shouldn’t have gotten it. Surely not! This would be the preventive cardiology equivalent of sticking one’s head in the sand.
This is not the first time Topol has opined on the dangers of CAC. An excerpt from his book, ‘The Patient Will See You Now: The Future of Medicine Is in Your Hands” posted on Scientific American describes the ills created in a 58 year old man who had a CAC score of 710.

My patient was told that he had a score of 710—a high calcium score—and his physician had told him that he would need to undergo a coronary angiogram, a roadmap movie of the coronary anatomy, as soon as possible. He did that and was found to have several blockages in two of the three arteries serving his heart. His cardiologists in Florida immediately put in five stents (even though no stress-test or other symptoms had suggested they were necessary), and put him on a regimen of Lipitor, a beta-blocker, aspirin and Plavix.

This case is not an example of inappropriate usage of CAC it is an example of really bad doctoring and failure to utilize the CAC information properly.
One should never order a cardiac catheterization/coronary angiogram solely on the basis of a high CAC score. Even ordering a stress test in this situation is debatable as I discuss here.
And Topol’s patients symptoms were most likely related to a beta-blocker that he didn’t need (see here).

Later in the podcast I reached maximum flabbergast  levels when Topol announced that as a result of a high score for CAD risk he received using an iPhone app called MyGeneRank he had started taking a statin drug.
He enthusiastically promoted the app which his Scripps Translational Science Institute developed and urged listeners to utilize this approach to better refine the estimate of their risk of heart attack and stroke.
Per the Scripps website:

The MyGeneRank mobile app is built using Apple’s ResearchKit, an open source framework that enables researchers and programmers to build customized mobile apps for research purposes. With user permission, the app connects with the 23andMe application program interface and automatically calculates and returns a genetic risk score for coronary artery disease.
In addition, the app calculates a 10-year absolute risk estimate for an adverse coronary event, such as heart attack, using a combination of genetic and clinical factors. Users are able to adjust behavioral risk factors to see the influence of lifestyle habits on their overall risk.

“We are excited to launch a unique study that combines an iOS app and genomics to help guide important health decisions,” says Eric Topol, MD, Founder and Director of the Scripps Translational Science Institute and Professor of Molecular Medicine at The Scripps Research Institute. “Not only does participating in the study arm individuals with their own data, but it also gives them the opportunity to participate in new type of research – one that is driven by and for patients.”

Curious, I downloaded the MyGeneRank app, answered some questions and gave it permission to access my 23 and Me data. After requiring me to complete a survey on my health it then  yielded  my coronary artery disease risk score. 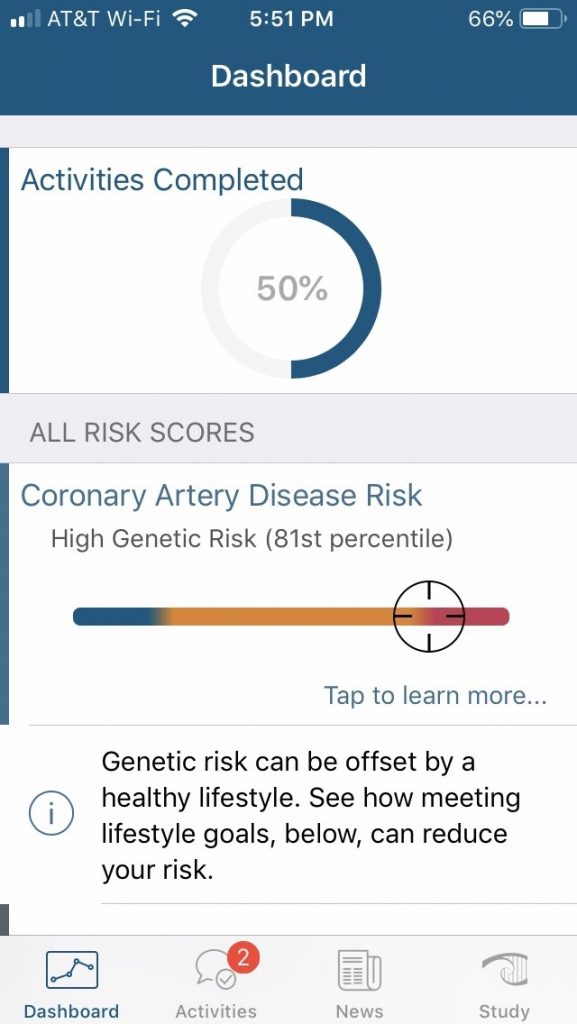 Oh, no! My genetic risk score was at the 81st percentile! In the red zone.  According to Eric Topol I should take a statin like him. Based on these results I probably should be incredibly anxious and crippled by fears of cardiac death.
Fortunately, I have superior information to allay my fears. I’ve had CAC scans in the past which are well below average for men my age. Despite my dad’s history of early CAD, a recent coronary CT angiogram showed minimal plaque. I know exactly where I stand risk-wise.
How many cardiac cripples has Topol’s MyGeneRank inappropriately created?
Is the data that MyGeneRank utilizes superior to that from CAC scans?
For coronary artery calcium scanning there is a wealth of data supporting improved risk prediction and we are looking directly at the atherosclerotic process that eventually causes the diseases we want to prevent.
It’s interesting that a recent study looking at a polygenetic risk score’s ability to predict cardiac events was comparing the risk score’s ability to predict subclinital atherosclerosis:

In the Scientific American article Topol quotes Mark Twain:, “To a man with a hammer, a lot of things looks like nails that need pounding.”
Topol’s hammer is artificial intelligence. We eagerly await the day he discovers a nail that he can bang on that  significantly advances medical care.
In the meantime I and the vast majority of progressive preventive cardiologists will be utilizing CAC scores intelligently to identify both those patients at high risk for cardiovascular events who need more aggressive treatment and those at low risk who can be reassured and have treatment de-escalated.
Polygenetic CAD risk scores do show promise to improve our predictive powers but more study is needed in this are before we make clinical treatment decisions based on the results.
Astoundingly Yours,
-ACP

11 thoughts on “Are You Taking A Statin Drug Inappropriately Like Eric Topol Because of the MyGeneRank App?”