The skeptical cardiologist was quite enthusiastic about AliveCor’s Kardia Band for Apple Watch upon its release late in 2017.

I was able to easily make high fidelity, medical grade ECG recordings with it and its AI  algorithm was highly accurate at identifying atrial fibrillation  (see here). This accuracy was subsequently confirmed by research.

Many skepcard readers spent $200 dollars for the Kardia Band and had found it to be very helpful in the management of their atrial fibrillation.

However, in December of 2018 Apple added ECG recording to its Apple Watch 4, essentially building into the AW4  the features that Kardia Band had offered as an add on to earlier Apple Watch versions.

In my evaluation of the Apple Watch I found it to be “an amazingly easy, convenient and straightforward method for recording a single channel ECG” but its algorithm in comparison to AliveCor’s yielded more uncertain diagnoses.

Given it size, prominence and vast resources, Apple’s very publicized move into this area seemed likely to threaten the viability of AliveCor’s Kardia Band.

“We’re not convinced that Apple’s excellent, engaging product is a competitor yet,” he said in February. “We believe that from a price perspective, this product is least accessible to the people who need it most. If you’re not an Apple user, you’ve got to buy an Apple Watch, you’ve got to buy an iPhone to make the system work. So their technology is excellent, but we think the platform is both complicated and expensive and certainly not, from a marketing perspective, targeting the patient populations we target.”

Indeed, AliveCor’s Mobile ECG device and its recently released 6 lead ECG are doing very well but the threat to the viability of KardiaBand was real and MobiHealth News announced Aug. 19 that AliveCor had officially ended sales of the Kardia Band.

An AliveCor representative told MobiHealthNews that the company “plans to continue supporting KardiaBand indefinitely” for those who have already purchased the device. The company’s decision was first highlighted by former MobiHealthNews Editor Brian Dolan in an Exits and Outcomes report.

Mr. Bahr has confirmed to me that AliveCor does plan to continue supporting KardiaBand indefinitely. This includes replacement of KardiaBand parts.

The informed reader who notified me of AliveCor’s decision also notes:

The official reason is that they could not keep up with the Apple Watch updates and therefore the Smart Rhythm feature did not work properly.

I think many of us knew from the beginning that smart rhythm was not very accurate But in spite of that the Kardia band provided a valuable convenience over their other products.

It does appear that Smart Rhythm is no more.

AliveCor’s website was updated 6 days ago to state that Smart Rhythm was discontinued:

” due to changes beyond our control in the Apple Watch operating system, which caused SmartRhythm to perform below our quality standards”

Likely, as my reader was told, the frequent  AW4 updates plus the lack of a large KardiaBand user base made it unprofitable for AliveCor to continue to support Smart Rhythm.

Smart Rhythm, of course was AliveCor’s method for watch-based detection of atrial fibrillation. It clearly had limitations, including false positives but given AliveCor’s track record of dedication to high quality and accuracy I assumed it would improve over time.. 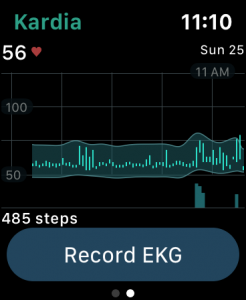 Apple, on December 6, 2018  with the release of its watchOS 5.1.2 for AW4 announced its own version of Smart Rhythm at the same time it activated the ECG capability of AW4.

Apple called this feature “the irregular rhythm notification feature” and cited support for its accuracy from the widely ballyhooed Apple Heart Study (which I critiqued here.)

Despite widely publicized reports of lives being saved by TIRNF we still don’t know whether its benefits outweigh its harms. It is not clear what its sensitivity is for detecting atrial fibrillation and I have reported one patient who was in atrial fibrillation for 3 hours without her AW4 alerting her to its presence.

For AW4 users, absence of an alert should not provide reassurance that your rhythm is normal.

Thus is does appear that the Goliath Apple hath smote the David AliveCor in the watch-based afib battle. This does not bode well for consumers and patients as I think as competition in this area would make for better products and more accountability.

Per AliveCor the KardiaBand currently works with all all Apple Watches except the original one.

The Apple TIRNF per Apple:

is available for Apple Watch Series 1 and later and requires iPhone 5s or later on iOS 12.1.1 in the US, Puerto Rico, Guam and US Virgin Islands. The irregular rhythm notification feature does not detect a heart attack, blood clots, a stroke or other heart-related conditions including high blood pressure, congestive heart failure, high cholesterol or other forms of arrhythmia.