It has been estimated that patients with paroxysmal atrial fibrillation (PAF) have health care costs 5 times those without  afib. More than 50% of those costs are attributed to ER visits and acute care hospitalizations. The pill in the pocket (PIP)  approach can substantially reduce those hospital visits.
PIP addresses the complimentary patient priorities of minimizing daily drug burden and empowering patients to self-manage their episodes of sustained PAF thereby reducing the need to visit the ER or be hospitalized.

How Doth The Pill In Pocket Work?

With this approach, the patient upon experiencing a symptomatic episode of atrial fib takes (or as we doctors like to say “self-administers”) a single bolus of oral flecainide or propafenone (two so-called antiarrhythmic drugs or AADs.)
It is not necessary that the pill be in the pocket of the patient, indeed the pill might be in the pocket of the pastor of the patient or perhaps in the purse of the paramour of the patient. Indeed, the pill only need be near enough that the patient can pop it into his or her pie hole within a reasonable time period after the AF begins.
In properly selected patients, generally within 3 hours, the rhythm will suddenly pop back to normal
Prior to popping the AAD pill it is wise to have the patient pop a pill that slows the heart rate such as a beta blocker or cardizem or verapamil.
After popping the pill it wise to have the patient assume a supine position or at least a sitting position for a few hours or until the heart pops back to normal.

One Man And One Woman’s PIP Experience

I first saw Pete in 2017 on the day after his 60th birthday.  He awoke in the middle of the night feeling his heart fluttering. He was weak  and very light headed and came to our ER where he was noted to be in rapid atrial fibrillation.
He was given intravenous  cardizem which slowed his heart rate and made him feel better but did not convert him back to normal rhythm. We started him on the newer oral anticoagulant, Eliquis, to reduce his stroke risk.
The next day I performed a cardioversion on him after excluding the presence of left atrial thrombus with a transesophageal echocardiogram.
He did well for some time without recurrent afib but two years later he was again awoken from sleep around 1130 PM with a feeling of his heart fluttering and shortness of breath.
In the ER afib with rapid ventricular response was again noted and this time the ER doctor suggested that an electrical cardioversion be performed right away. Pete was told  there were “slight risks” to the procedure but he was nervous about doing it without me being on the case. His heart rate  was 106 and he was given an intravenous beta-blocker,  metoprolol to slow the heart rate.
The next morning we discussed options with him and decided to try the PIP approach to convert him back to normal rhythm. He received 300 mg flecainide orally at 11 AM and 1.5 hours later he converted to the normal rhythm.. The monitor strips recorded below captured the transition nicely. 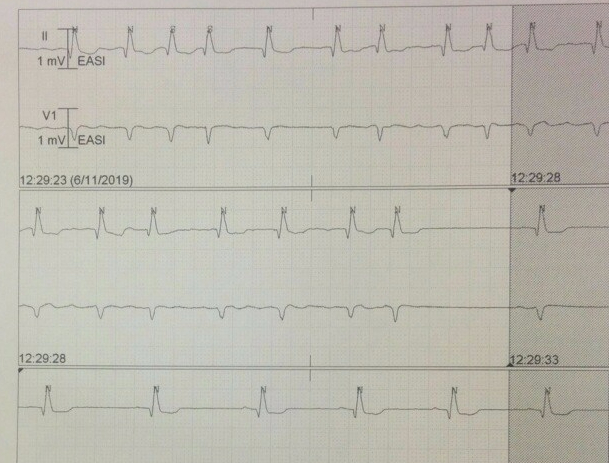 A 72 year old woman whom we shall call Miss Mystery X  presented with a sensation of weakness and dizziness beginning at noon. She had a history of paroxysmal afib. We had her come into office and ECG demonstrated atrial fibrillation at a rate of 100 BPM.
She was admitted to telemetry and given 300 mg flecainide and 45 minutes later the telemetry ECG strip below indicated conversion to normal sinus rhythm without any pauses, symptoms or hypotension. We discharged her later that day.

For both of these patients we have carefully documented that they have a structurally normal heart by echocardiography and stress testing which is essential when utilizing flecainide. In addition, we carefully assess for stroke risk and anticoagulate them accordingly.
They now have available as outpatients a method for converting from afib to SR which is proven safe and effective for them.
I recently saw Miss X in the office after her hospital visit. She had just returned from a trip to Peru and Bolivia. Among other fascinating adventures she had flown over the Nazca Lines.


Fortunately, she had no episodes of afib but should she have started fibrillating she knew that she had a safe and effective treatment that could convert her back to normal without the need of engaging foreign doctors and hospitals.
One of these two patients has acquired  the AliveCor Kardia Mobile ECG and will have the capability of transmitting to me his ECG via KardiaPro should his device alert him to the presence of atrial fibrillation. This capability further enhances the control that patient’s can have over the diagnosis and treatment of their afib episodes

The Science Behind The PIP Approach

The seminal article on the PIP approach was published in the New England Journal of Medicine in 2004 by Alboni, et al.
The paper reported on 268 patients with PAF presenting to the ER who had a structurally normal heart and were without disabling symptoms or low BP who were given larges oral doses of oral flecainide or propafenone. Overall, 210 patients converted to normal rhythm and were felt appropriate for out patient treatment.
This approach was quite successful:

ER visits and hospitalizations for PAF were markedly reduced.
I tracked down Dr. Alboni through the scientific research social media site ResearchGate.net and asked him if he was still utilizing this approach and if he had any new data.
He responded.

the follow-up was terminated as reported in the paper. However, I have then observed that in patients > 75 years there are many side effects (unpublished data) and I do not utilize anymore the pill-in-the-pocket approach in these patients. I am still using flecainide and propafenone according to the doses and the methods described in the paper.

His 2004 paper enrolled patients 18 to 75 years of age and I have tended to restrict the PIP approach to my patients under age 76 due to concerns about more conduction disease and occult CAD in older patients.

When I pressed Dr. Alboni for more data or info on this he responded:

There is a nice paper on recent experience with the PIP approach which was published in 2018 by Josh Andrade who runs a multidisciplinary AF clinic in Vancouver, Canada

Consecutive patients aged 18-75 years of age attending the Vancouver multidisciplinary AF clinic and receiving PIP treatment were studied over a 3 year period. Entry criteria included, sustained symptomatic episode lasting >2 hours, frequency <1/month, absence of severe or disabling symptoms with AF episode
Patients with significant structural heart disease (LVEF<50%, “active ischemic heart disease”, severe LVH) were excluded along with those with the following features:
-Abnormal conduction (QRS>120ms, pr>200 ms, pre excitation)
-Clinical or ECG evidence of sinus node dysfunction/bradycardia or AV block
-hypotension with systolic blood pressure <100 mm Hg
Participating patients received their first PIP treatment while being monitored on telemetry in either an ER or hospital telemetry.  They were given the instructions below to give to the doctors in the ER. 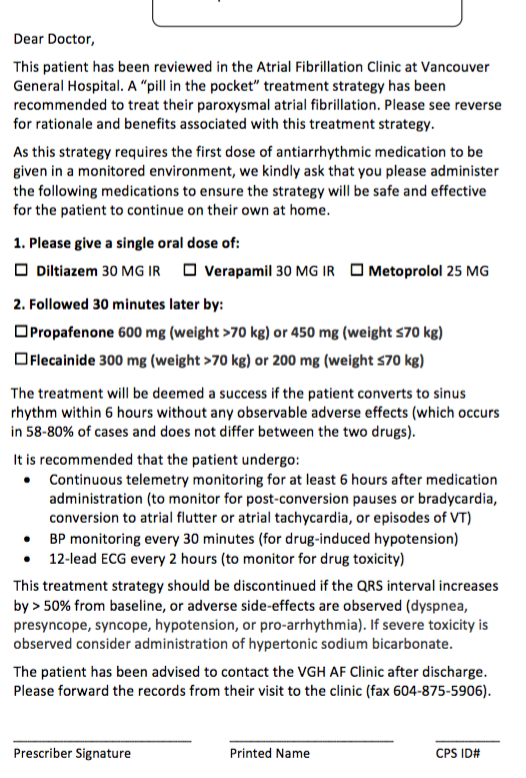 And they were provided with these instructions: 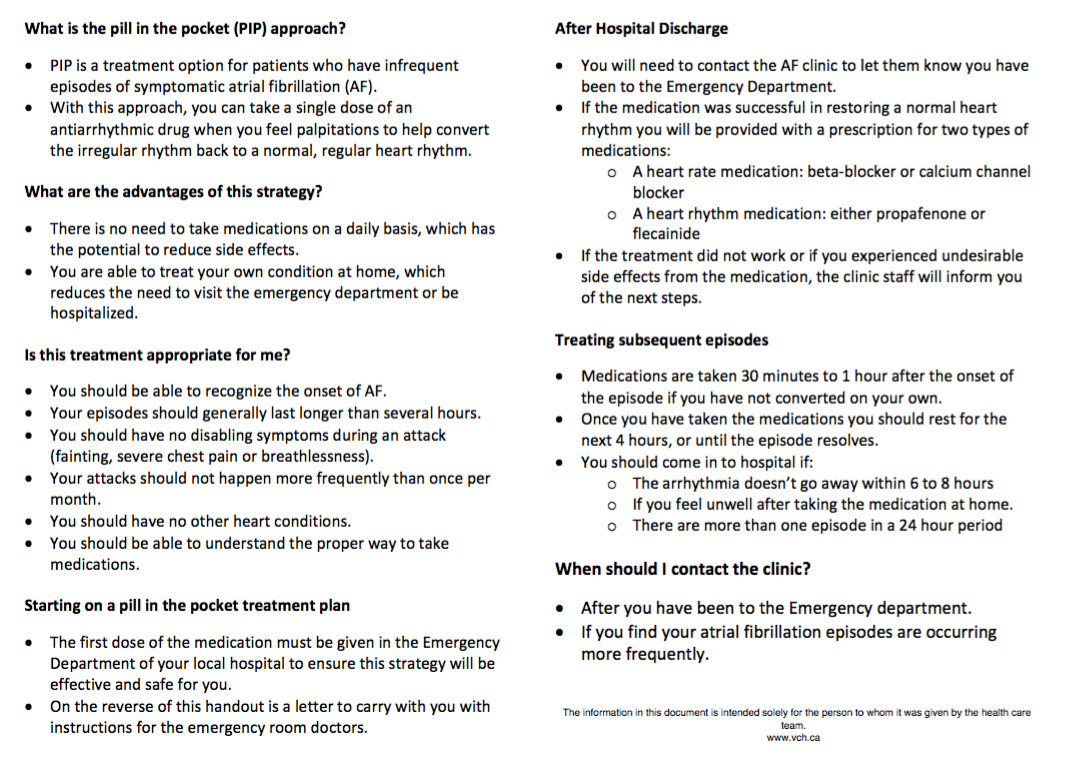 Adverse events (mostly low blood pressure but also 2 cases of conversion of  rhythm to a more rapid atrial flutter requiring cardio version) were noted in 16% of the initial PIP-AAD administrations and 19% failed to convert to NSR.
The Andrade PIP approach has patients receive a single dose of a rate-slowing drug 30 minutes prior to giving the AAD. This was done to prevent 1:1 conduction of atypical flutter. It’s not clear if this is beneficial and it could potentially contribute to episodes of bradycardia or hypotension.
In my practice I utilize flecainide over propafenone exclusively for both PIP therapy and chronic maintenance therapy. The generic version of flecainide for chronic therapy is twice daily versus thrice daily for propafenone and therefore preferred.  Dr. Andrade told me that when using the PIP approach:

In our clinic it’s probably 60:40 Propafenone to Flecainide.

Pill In The Pocket: Another Tool in The Toolkit For Enlightened Medical Management of Atrial Fibrillation

For the patient with PAF and relatively infrequent episodes of symptomatic afib the PIP approach can be very useful. Once established as safe and effective it allows the patient to avoid ER and hospital visits related to the PAF.

The ideal patient is less than 76 years of age and has a structurally normal heart.
PIP works really well for patients who are armed (pun intended) with a way to monitor their rhythm such as Apple Watch 4 or AliveCor’s Kardia Mobile ECG. Use of personal ECG monitoring in conjunction with a cardiologist practicing Enlightened Medical Management of afib is the optimal approach.
ProPIPically Yours,
-ACP

13 thoughts on “Enlightened Medical Management of Atrial Fibrillation, Part II: The Pill In The Pocket Approach”