In order to escape Hurricane Dorian’s imminent arrival at Wrightsville Beach, NC the skeptical cardiologist and the wife formerly known as the eternal fiancee’ (WFKATEF) fled to Asheville, North Carolina.
There we spent a delightful 48 hours before heading to Mt. Airy, NC to participate in my daughter’s wedding.
We had never been to Asheville but found it to be a cozy town full of great food, music, booze, art, architecture, and books-surrounded by beautiful mountains with intriguing hiking trails.
We were lucky enough to snag a room at the Cambria hotel which is perfectly centered in downtown Asheville.
While the WFKATEF napped I strolled across the street and
investigated a gorgeous old building. This former and current shopping arcade was built by EW Grove.

Grove created a tasteless quinine (which for 300 years was the only effective malaria treatment ) tonic and by 1890 according to the Grove arcade website:

The chill tonic was so popular the British army made it standard issue for every soldier going off to mosquito infested lands and, by 1890, more bottles of Grove’s Tasteless Chill Tonic were sold than bottles of Coca-Cola. 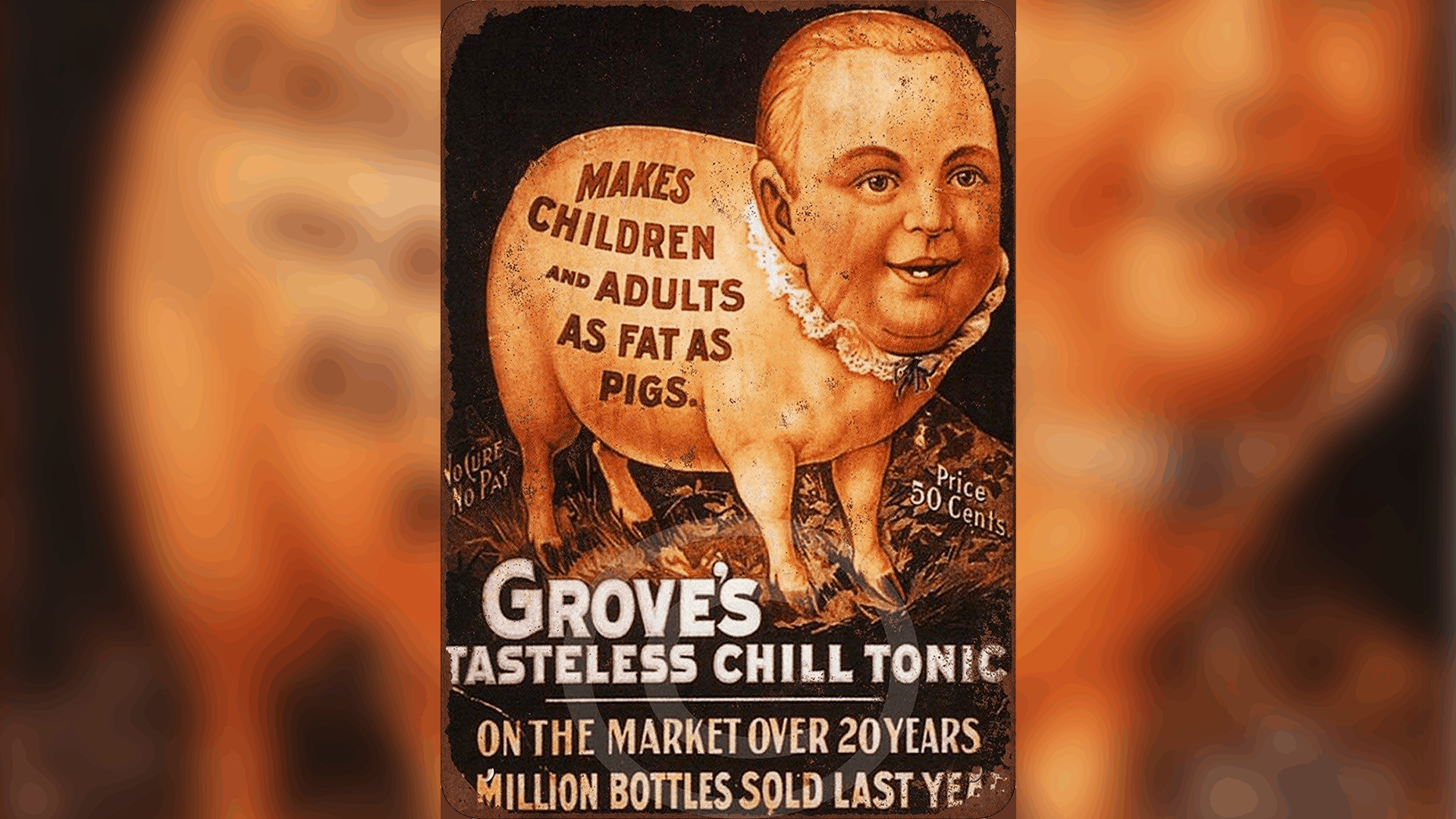 Grove moved his tonic operations from Paris, Tennessee to St. Louis in 1890 but “the heavy pollution of the factory district caused Grove to develop lifelong breathing issues”.  As a result, Grove visited Asheville for its climate, which he found was good for his health and relieved his bronchitis.
Lots of wealthy individuals with tuberculosis visited Asheville between the 1880s and the 1930s due to a widespread perception in that era that its climate was optimal for curing the disease.
When Grove Arcade held its Grand Opening in 1929, it quickly became home to a fine collection of local shops and services. Following a period as the home of the National Weather Records Center it reopened in 2002 in its current incarnation. 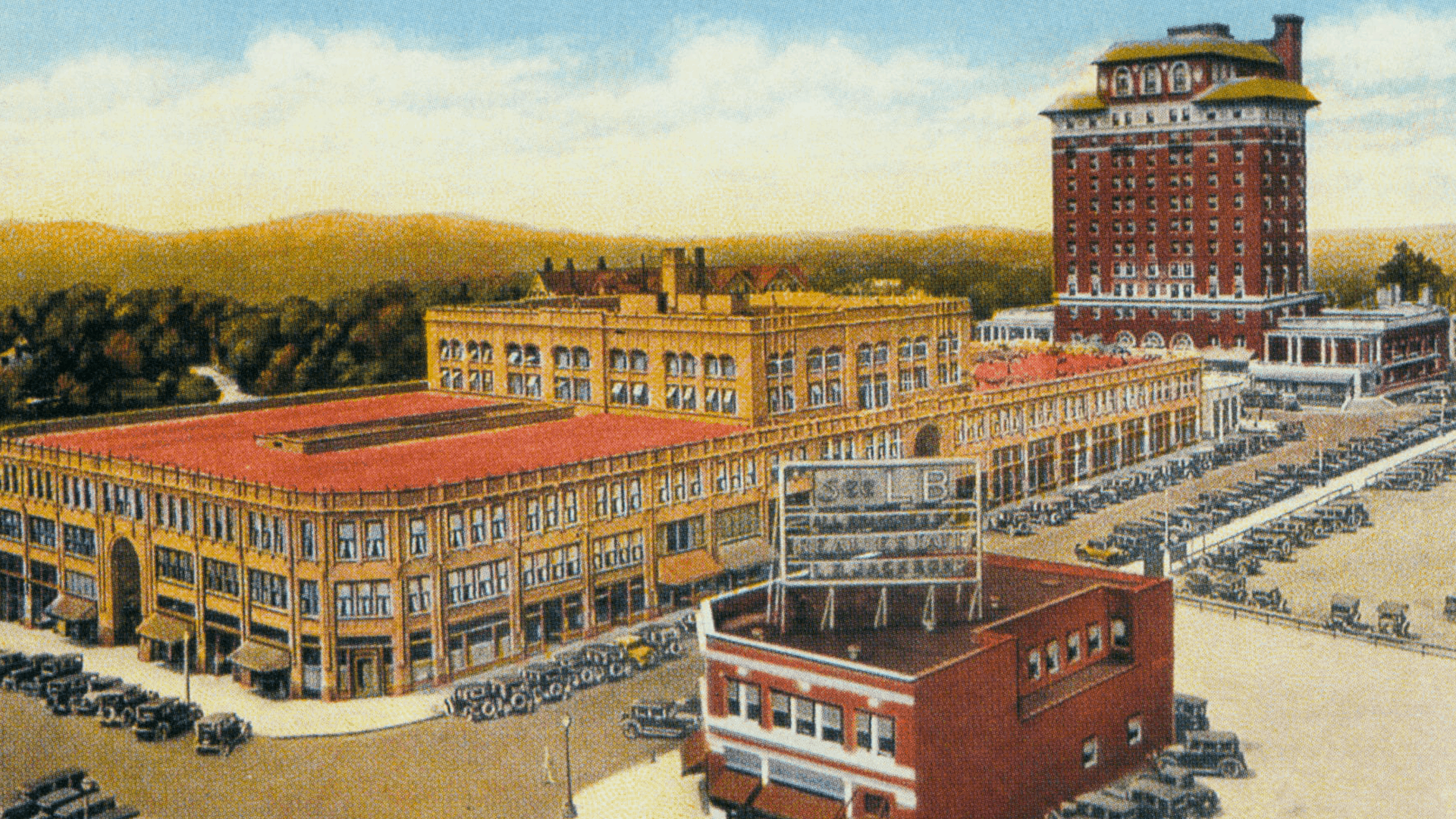 My first discovery at the Grove was  the Battery Park Book Exchange  and Champagne Bar. I was intrigued by the combination of fine wine and champaign and old books. 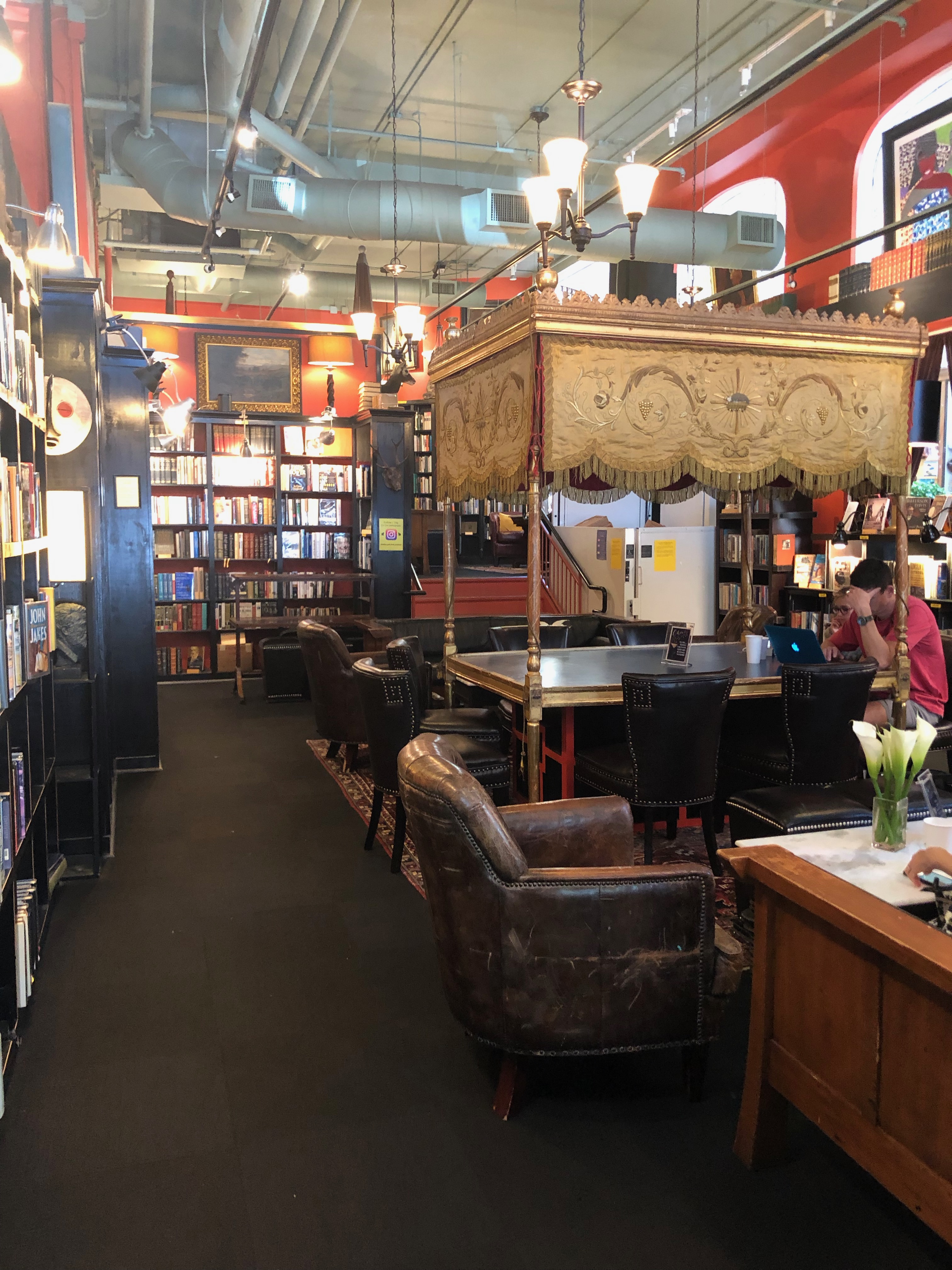 Wandering through the various nooks and crannies of the Book Exchange one encounters delightful tables and chairs where one can consume a beverage and peruse classic literature. In one nook (or perhaps it was a cranny) I came across two of my all-time favorite books in a wonderful leather-bound format. 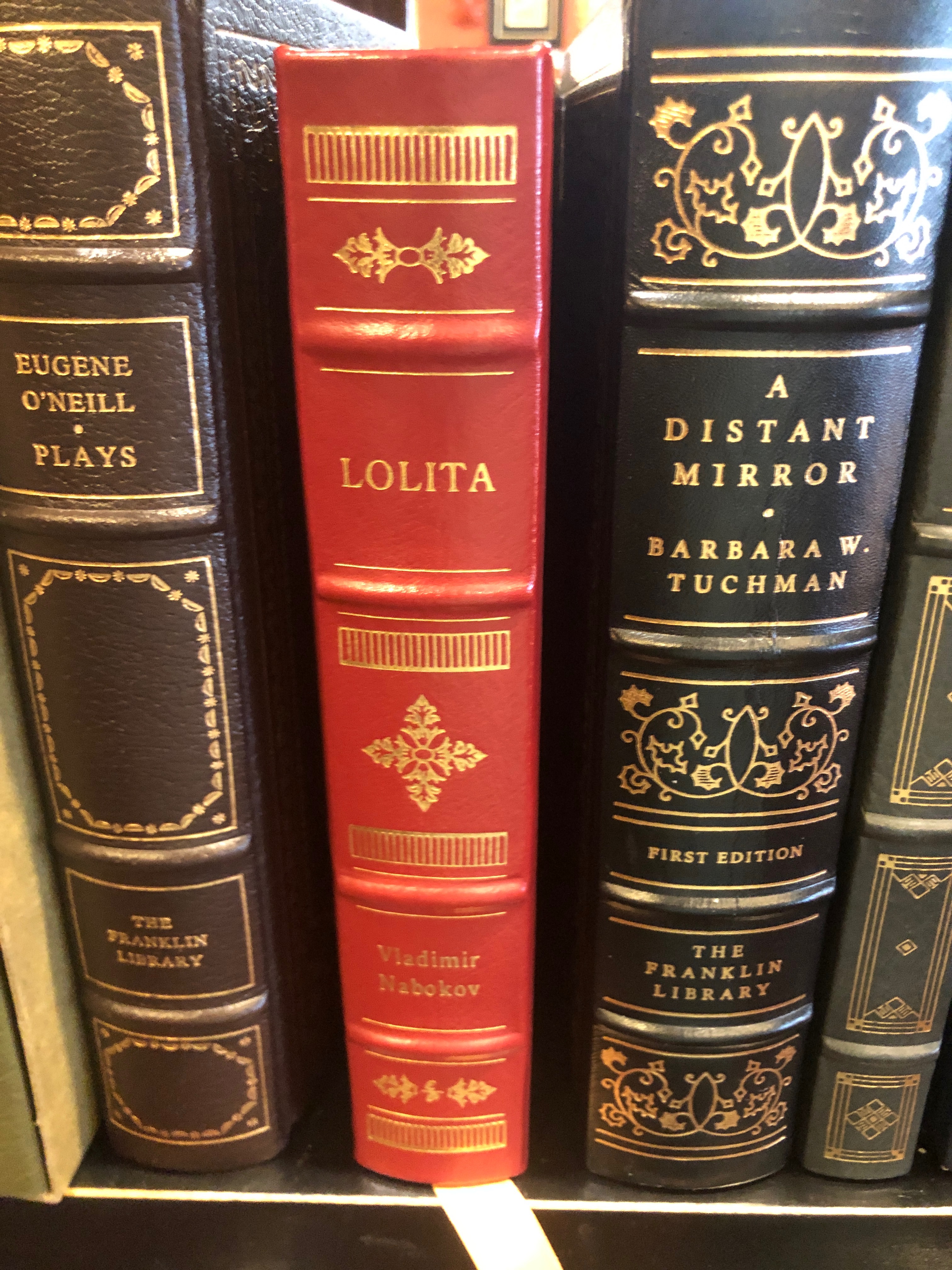 No, I’m not a Eugene O’Neill fan but I strongly considered buying this gorgeous Franklin Library First edition of Barbara Tuchman’s description of the calamitous 14th century to replace my dog-eared and coffee-stained paperback edition.

Wandering around downtown Asheville we encountered sseemingly  random cool art such as this ironwork arbor of medicinal herbs featuring a bust of Elizabeth Blackwell the first woman to be awarded a medical degree in the United States..

Elsewhere we encountered a giant iron.

In putting this post together I realized that these features are part of the Asheville Urban Trail which features various artistic references to” George Vanderbilt, E.W. Grove, Thomas Wolfe, F. Scott Fitzgerald, Douglas Ellington, and a short story writer calling himself O. Henry ~ just to name a few.”

Musical Jams At Jack of the Wood

As I rambled past an interesting looking Irish pub, Jack of the Wood, I noticed a flyer indicating that  old time music jam sessions occurred there every Wednesday night. We ended up there that night mesmerized by  a rotating group of locals playing banjos, guitars, fiddles, and a string bass. 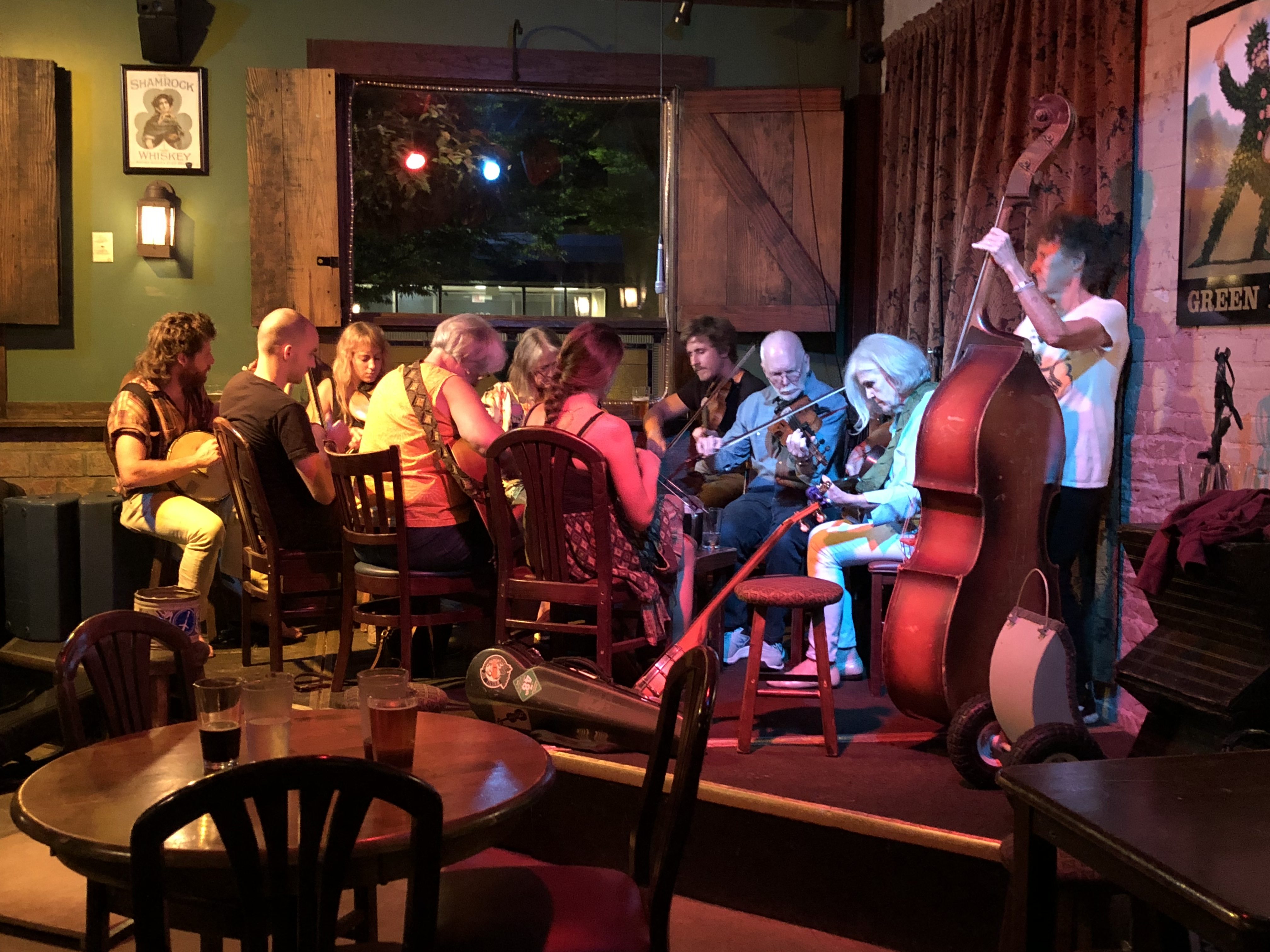 We liked Jack of the Wood so much we came back the next night for the bluegrass jam. 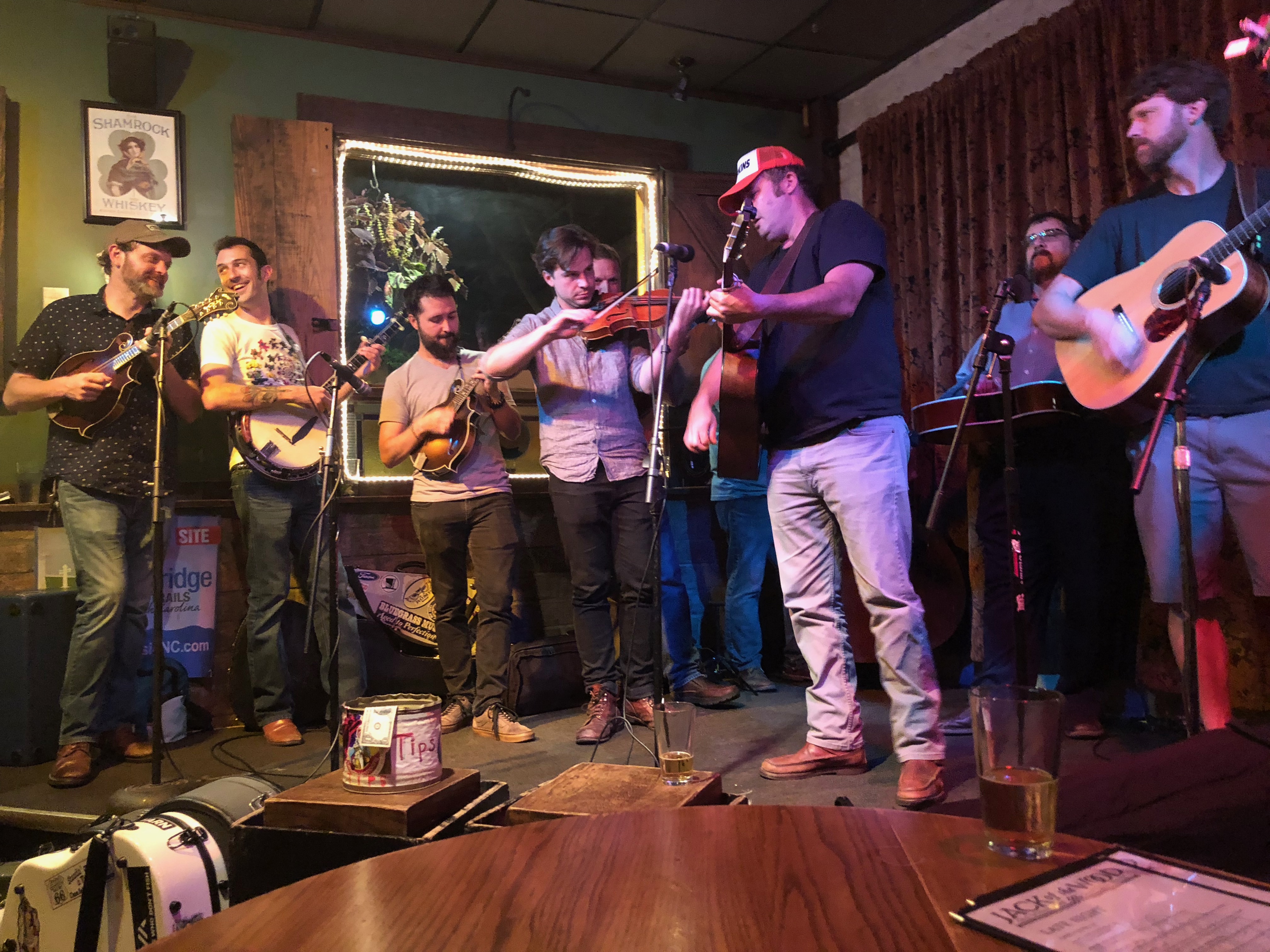 That night we Ubered to west Asheville and had a wonderful meal at Jargon. The WFKATEF ordered a cocktail named the Icebreaker 2.0 predominantly because it involved smashing a “hollow smoked ice ball” in our presence.

(Ice Breaker 2.0 – Knob Creek Bourbon, Carpano Antica vermouth, Ramazzotti Amaro, Angostura bitters, hollow smoked ice ball )
Asheville has a thriving craft beer scene but as I was in a keto frame of mind I didn’t partake extensively. It is also known for its excellent farm to table and foodie restaurants.
I won’t bore you with the details of a food and booze tour that we took or random rum tasting but if you are interested in such things Food and Wine has their own “48 hours in Asheville” which focuses on (shocker) food and booze in Asheville here.

Asheville is surrounded by the Blue Ridge Mountains which offer lots of great hiking opportunities. Our time was limited but we managed a short drive on the Blue Ridge Parkway to take a brief hike at Craggy Pinnacle 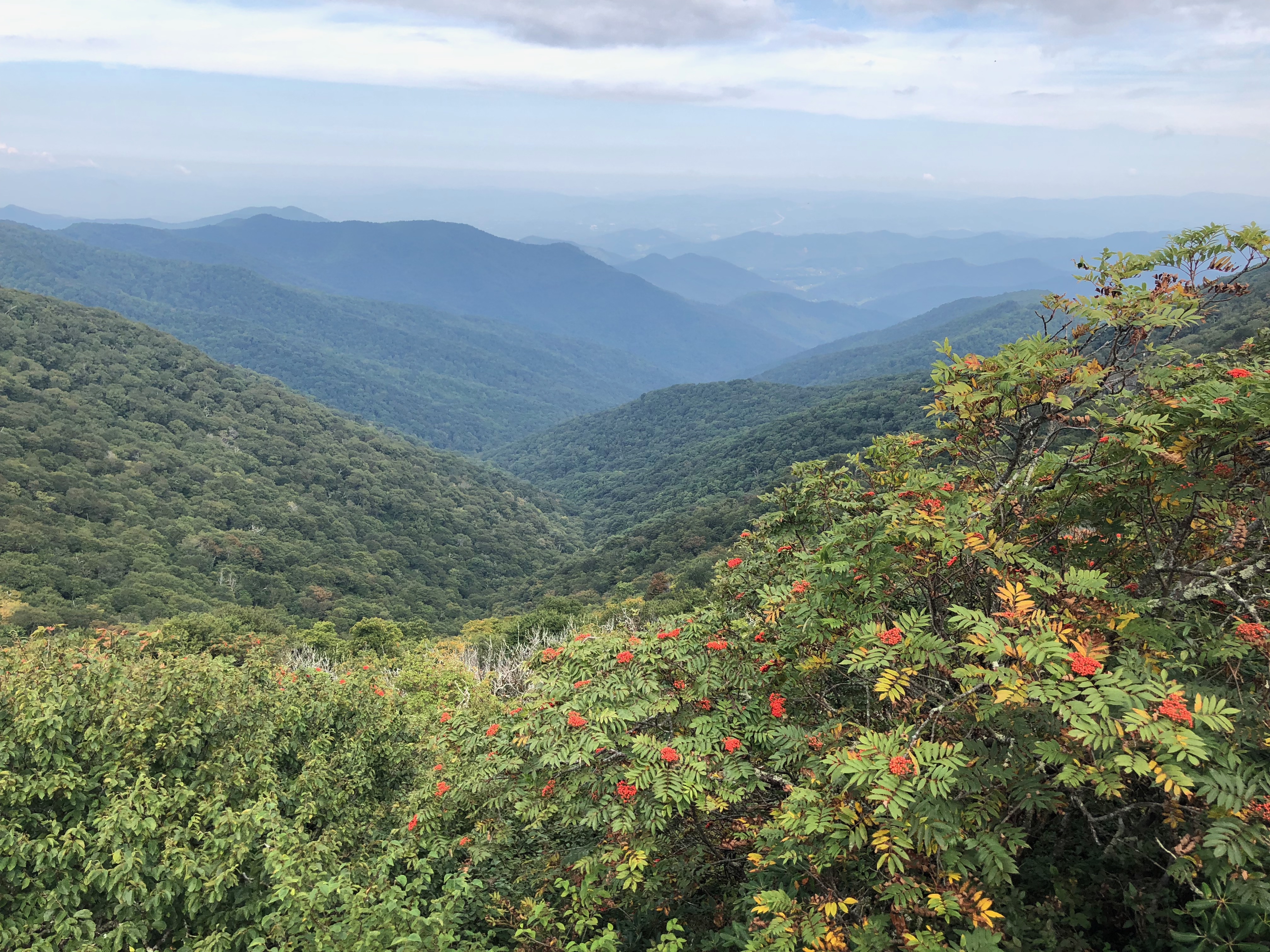 The Blue Ridge Parkway  is a 500 mile road stretching from Virginia to North Carolina and managed by the National Park Service. It is a “series of parks providing the visitor access to high mountain passes, a continuous series of panoramic views, the boundaries of its limited right-of-way rarely apparent and miles of the adjacent countryside seemingly a part of the protected scene.” 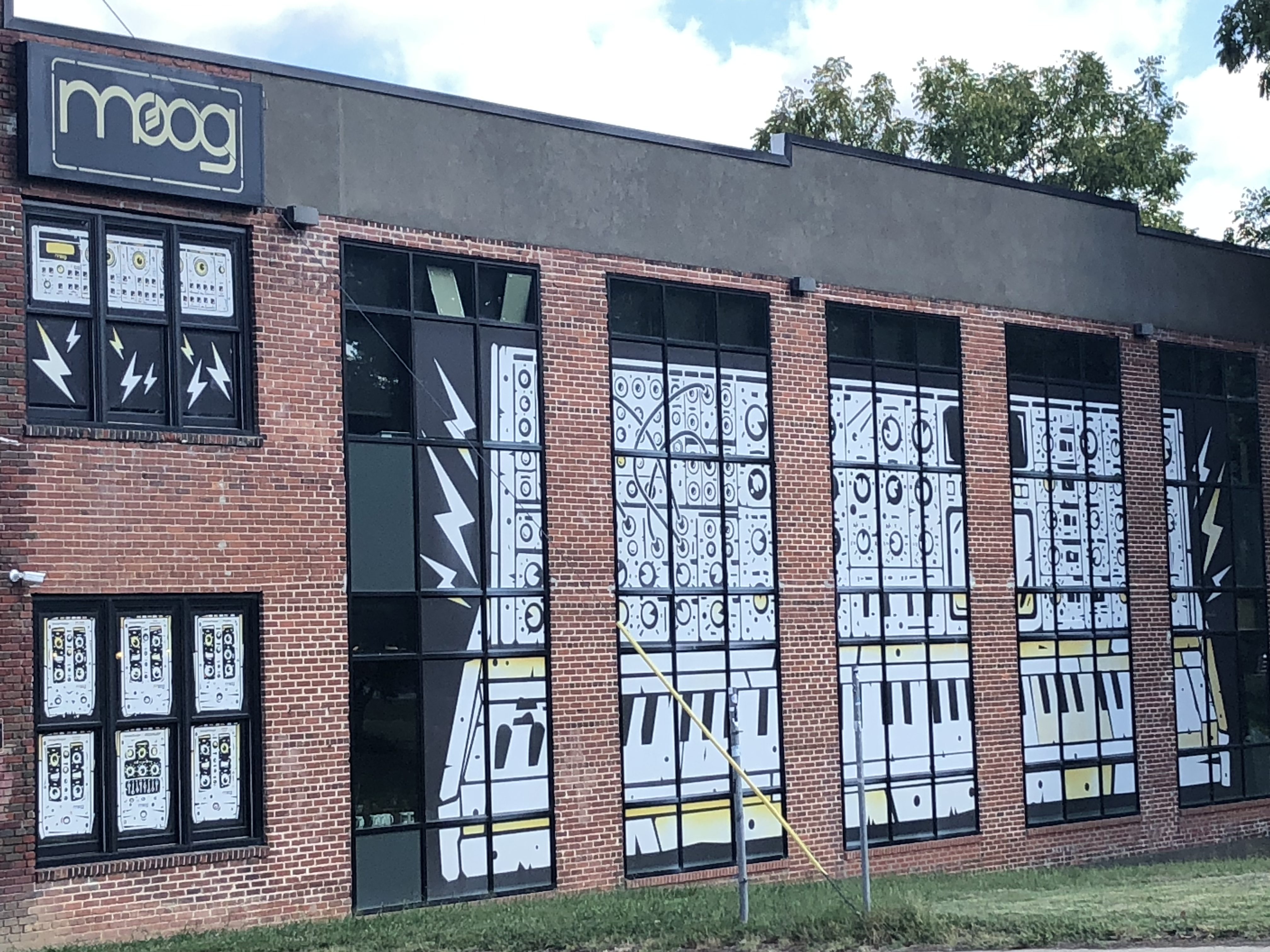 While waiting for the formal tour to begin you find yourself in a room containing a painstakingly recreated version of the Moog modular that Keith Emerson played on tours and on fantastic albums with Emerson, Lake and Palmer.. 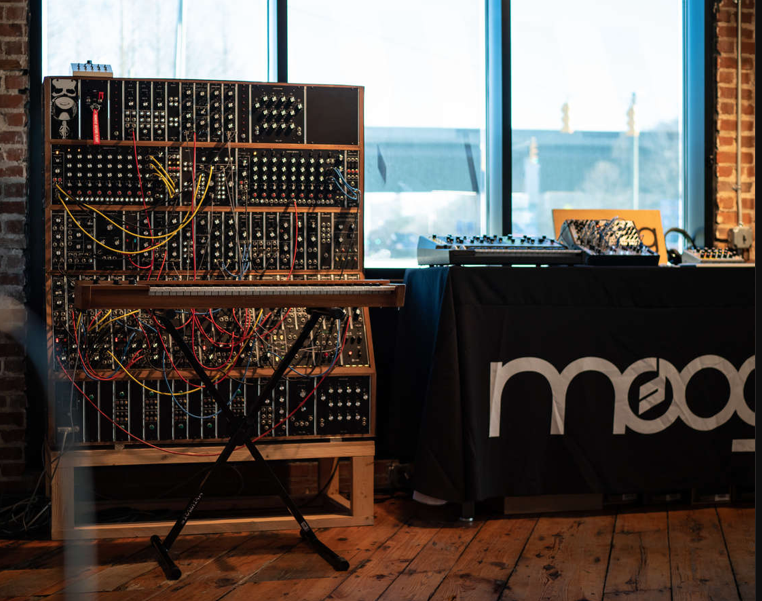 You are also surrounded by every Moog synthesizer and processor that Moog sells. Even more fun, if you get there early like I did you can play every single one.

I own several Moogs and I could talk forever about the history of Bob Moog and Keith Emerson but I will leave that for another post.

The leading tourist attraction in Asheville is the Biltmore estate. It is apparently the largest house in America but as I am a little burned out on fancy large palaces in Europe we decided not to go there.
I did want to wander through the gardens at Biltmore but you can’t purchase a ticket to do just that. You must purchase the $69 ticket and

Escape from everyday life to George Vanderbilt’s 8,000-acre estate in Asheville, NC. Your admission includes a self-guided visit of the breathtaking Biltmore House & Gardens, Antler Hill Village, and a complimentary wine tasting at our Winery.

All in all I would rate our visit to Asheville as one of the best 48 hours I’ve had in any American city.
Serendipitously Yours,
-ACP