The ISCHEMIA (International Study of Comparative Health Effectiveness With Medical And Invasive Approaches) study was first presented at the 2019 AHA meeting and provided further evidence that a conservative approach utilizing optimal medical therapy is an acceptable strategy for most patients with stable coronary disease (CAD).

Cardiologists have known since 2007  (since the landmark COURAGE study) that outside the setting of an acute heart attack (acute coronary syndrome or ACS), coronary stents don’t save lives and that they don’t prevent heart attacks.

Current guidelines reflect this knowledge, and indicate that stents in stable patients with coronary artery disease should be placed only after a failure of  “guideline-directed medical therapy.”  Despite these recommendations, published in 2012, half of the thousands of stents implanted annually in the US continued to be employed in patients with either no symptoms or an inadequate trial of medical therapy.

Yes, lots of stents are placed in asymptomatic patients.  And lots of patients who have stents placed outside the setting of ACS are convinced that their stents saved their lives, prevented future heart attacks, and “fixed” their coronary artery disease. It is very easy to make the case to the uneducated patient that a dramatic intervention to “cure” a blocked artery is going to be more beneficial than merely giving medications that stabilize atherosclerotic plaque, dilate the coronary artery or slow the heart’s pumping action to reduce myocardial oxygen demands.

Stent procedures are costly in the US (average charge around $30,000, range $11,000 to $40,000) and there are significant risks including death, stroke and heart attack. After placement, patients must take powerful antiplatelet drugs which increase their risk of bleeding. There should be compelling reasons to place stents if we are not saving lives.

What Did ISCHEMIA Prove?

Rates of all-cause death were nearly superimposable over the years studied, reaching 6.5% and 6.4% at 4 years for the invasive and conservative groups, 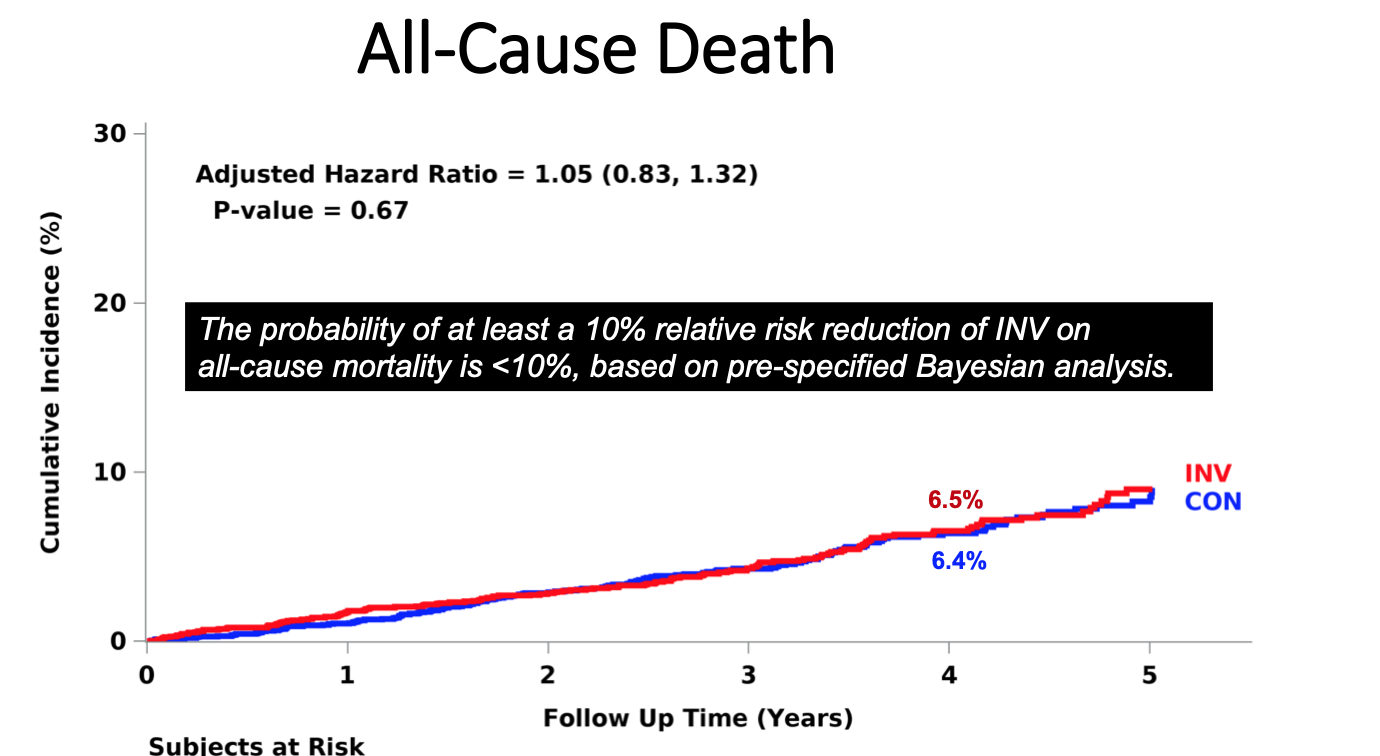 Inclusions and exclusion criteria are listed below. Patients with unacceptable angina despite optimal medical therapy were not included. These patients clearly benefit symptomatically from revascularization (as long as their chest pain is actually angina and not from another cause.)

All patients had stress imaging studies demonstrating moderate to severe amounts of ischemia. Such patients with very abnormal stress tests in the past have typically been sent immediately to the cath lab.

Based on ISCHEMIA we now know in these patients there is no need to do anything urgently other than institute OMT. 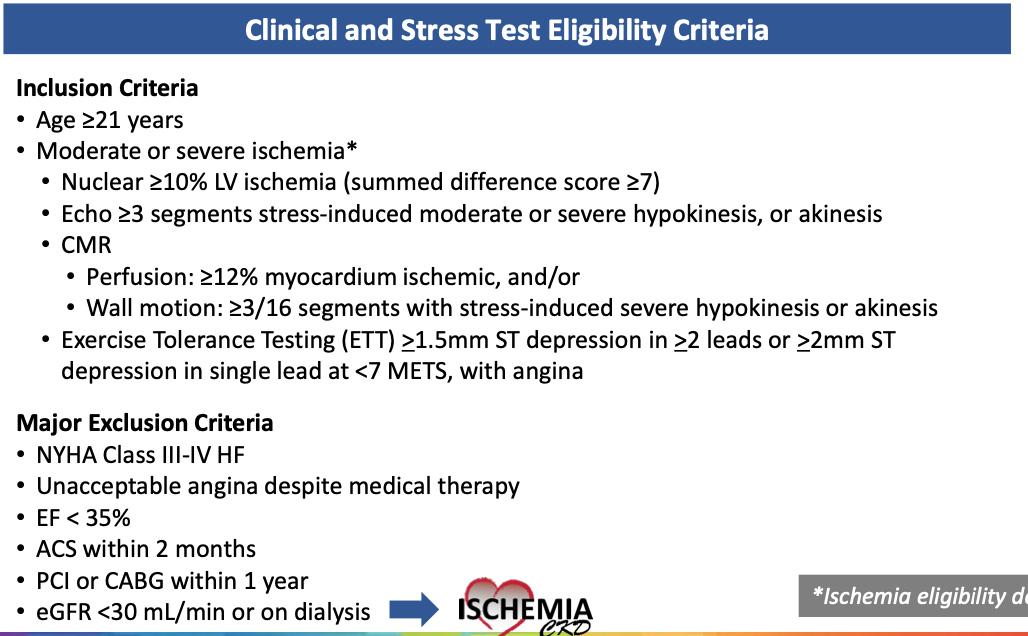 These patients were on good medical therapy which likely explains the very good outcomes in both conservative and invasive arms. The “high level of medical therapy optimization” is what cardiologists should be shooting for with LDL<70, on a statin with systolic blood pressure <140 mm Hg, on an antiplatelet drug, and not smoking. 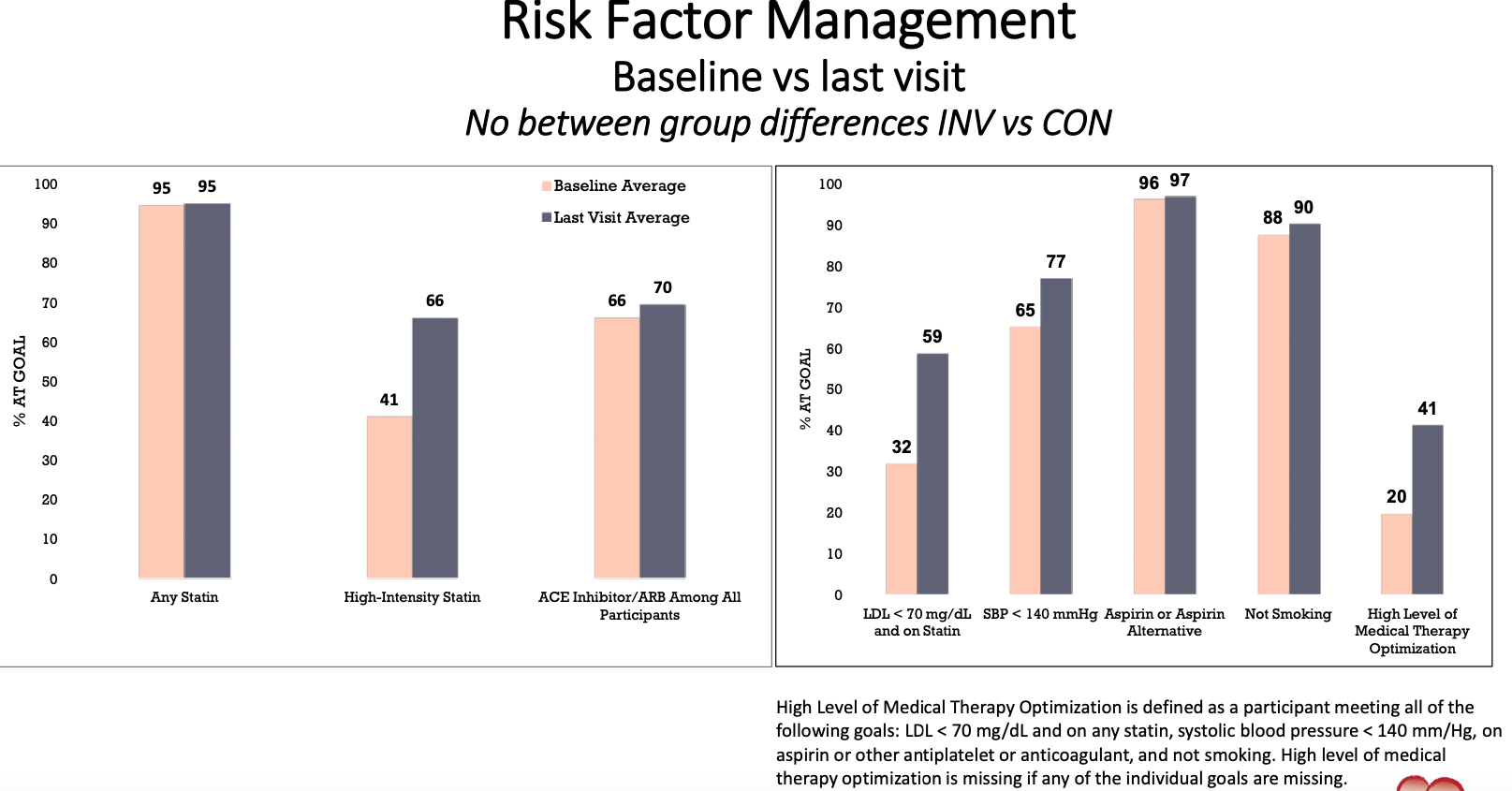 Interestingly coronary CT angiography (CCTA) was utilized prior to patients receiving catheterization. I’ve been utilizing this noninvasive method for visualizing the coronary arteries increasingly prior to committing to an invasive approach.

Finally, in a separate presentation the ISCHEMIA trial showed that the invasive strategy did improve symptoms and quality of life modestly. It did not improve quality of life in those without angina symptoms.

The ORBITA study (which I wrote about here) showed that a large amount of the symptomatic improvement in patients following stenting may be a placebo effect.

Hopefully, the results of ISCHEMIA will cut down on the number of unnecessary catheterizations, stents, and bypass operations performed. This, in turn, will save our health system millions of dollars and prevent unnecessary complications.

Outside the setting of an acute heart attack, the best approach to patients with blocked coronary arteries is a calm, thoughtful, and measured one which allows ample time for shared decision-making between informed patients and knowledgeable physicians. Such decisions should carefully consider the ISCHEMIA, COURAGE and ORBITA results.

N.B. Ischemia is a fantastic acronym for this study. Doctors use it a lot to describe the absence of sufficient blood flow to tissues.

N.B.2 Although I deplore the number of unnecessary caths and stents performed in the US, especially in patients without symptoms and those with noncardiac chest pain, I still utilize them in my patients with flow-limiting coronary stenoses and unacceptable anginal chest pain with symptoms despite optimal medical therapy and have noticed outstanding results. This angiogram shows a tight, eccentric LAD blockage in such a patient who now, post stent, has had complete resolution of the chest pain that limited him from even short walks. 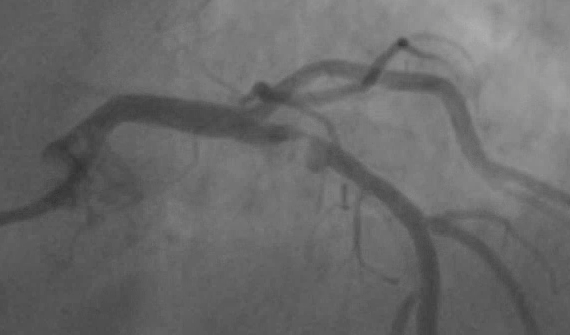