The Distortion of The Death of Dr. Robert Atkins Continues

Three years ago I carefully researched the details of the death of Robert Atkins and wrote about it on this blog. I was motivated by the grossly inaccurate portrayal of him promulgated on vegan and plant-based websites. Elsewhere on this website I have described in detail the death of Nathan Pritikin whose ultra-low fat diet stands in stark contrast to Atkins’ ultra-low carb diet.

The most important point I hoped to make was that we should not judge the benefits of any diet based on how the founder of that diet dies. There is far too much randomness in death and far too much genetic influence over our health to base dietary decisions on one man ( or woman’s) mode of departing existence.

Unfortunately my article did not end the misinformation rampant on the internet about Atkins so I’m reposting it today for all of you who may be feeling guilty about eating too much on Thanksgiving yesterday.

One of the characters in my story, Michael Bloomberg, has recently announced that he is running for President.

In the spring of 2003 at the age of 72 years, Robert Atkins, the cardiologist and  controversial promoter of high fat diets for weight loss, fell  on the sidewalk in front of his Atkins Center for Complementary Medicine in Manhattan.  He lost his footing on a patch of ice, slipped and banged his head on the pavement.  At the time of his fall his book ”Dr. Atkins’ New Diet Revolution” lead the NY times paper-back best seller list.

He was taken to nearby Cornell Medical Center where a clot was evacuated from his brain. Thereafter he lapsed into a coma and he spent 9 days in the ICU, expiring on April 17, 2003.

The cause of death was determined by the New York Medical Examiner to be “blunt injury of head with epidural hematoma.”

An epidural hematoma is a collection of blood between the skull and the tough outer lining of the brain (the dura) which can occur with blunt trauma to the head which results in laceration of the arteries in this area. It is a not  uncommon cause of death in trauma . Actress Natasha Richardson (skiing, see below)  died from this. Nothing about the manner in which Robert Atkins died would suggest that he was a victim of his own diet any more than  Natasha Richardson was.

However, within the year a campaign of misinformation and deception spear-headed by  evangelistic vegans would try to paint the picture that Atkins died as a direct result of what they perceived as a horribly dangerous diet.

Michael Bloomberg, then New York major,  was quoted as saying

“I don’t believe that bullshit that [Atkins] dropped dead slipping on the sidewalk.”

According to the Smoking Gun:

“The 61-year-old billionaire added that Atkins was “fat” and served “inedible” food at his Hamptons home when Bloomberg visited. The mayor’s inference, of course, was that Atkins was actually felled by his meat-heavy diet, that his arteries were clogged with beef drippings. “

Richard Fleming, a physician promoting prevention of cardiovascular disease through vegetarianism and with close ties to an organization  called Physicians Committe for Responsible Medicine (PCRM) sent a letter to the NY Medical Examiner requesting a copy of the full medical examination of Atkins. The NYME office  should have only issued copies of this report to physicians involved in the care of Atkins or next of kin but mistakenly complied with this request.  Fleming, who would subsequently publish his own low fat diet book, conveniently gave the report to PCRM which is directed by animal rights and vegan physicians.

Neal Barnard, the President of PCRM, in an incredibly unethical move sent the letter to the Wall Street Journal with the hope that the information would destroy the popularity of the Atkins diet, a diet he clearly despises..  Barnard said the group decided to publicize the report because Atkins’ “health history was used to promote his terribly unhealthy eating plan..” The WSJ subsequently published an article summarizing the findings.

To this day, advocates of vegetarianism and low fat diets, distort the findings of Atkins’ Medical Examination in order to depict high fat diets like his as dangerous and portray Atkins as a victim of his own diet.

To scientists and thoughtful, unbiased physicians it is manifestly apparent that you cannot base decisions on what diet plan is healthy or effective for weight loss on the outcome of one patient. It doesn’t matter how famous that one person is or whether he/she originated and meticulously followed the diet. It is a ludicrous concept.

Would you base your decision to engage in running  based on the death of Jim Fixx?  Fixx  did much to popularize the sport of running and the concept of jogging as a source of health benefit and weight loss. He died while jogging, in fact. An autopsy concluded that he died of a massive heart attack and found advanced atherosclerosis (blockage) of the arteries to his heart.

Fixx inherited his predisposition to heart disease and couldn’t run himself out of it. Multiple studies over the years have documented the benefit of regular aerobic exercise like running on longevity and cardiovascular risk.

Would you based your decision to engage in  a very low fat diet based on how Nathan Pritikin died?  Pritikin authored an extremely popular book emphasizing eliminating fat from the diet but developed leukemia and slashed his wrists,  committing suicide at the age of 69 years. Would vegetarians accept the premise that their preferred diet results in leukemia or suicidal depression based on Pritikin’s death?

The Distortion of Atkins Death

The NYME report lists Atkins weight at autopsy as 258 pounds. Low-fat zealots seized on this fact as indicating that Atkins was 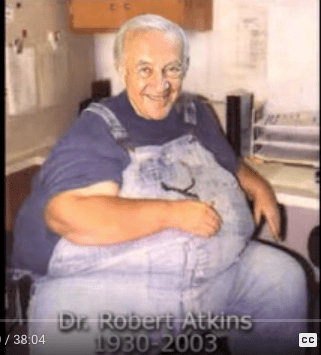 morbidly obese throughout his life.  For example, a  you-tube video of an audio interview of Atkinas online posted by “plant-based coach”  has this obviously photoshopped head of Atkins put on the body of a morbidly obese man. Atkins actually weight around 200 pounds through most of his life and a hospital note on admission showed him weighing 195 pounds. A substantial weight gain of 63 pounds occurred in the 9 days after his admission due to the accumulation of fluid volume and swelling which is not uncommon in the critically ill.

No autopsy was performed on Atkins but the NYME wrote on the document that he had “h/o of MI, CHF, HTN.”

MI is the acronym for a myocardial infarction or heart attack. As far as we can tell without access to full medical records, Atkins never had an MI. He did have a cardiac arrest in 2002. While most cardiac arrests are due to a cardiac arrhythmia secondary to an MI they can also occur in patients who have a cardiomyopathy or weakness in the heart muscle from causes other than MI.

In fact, USA Today reported that Stuart Trager, MD,  chairman of the Atkins Physicians Council in New York, indicated that Atkins was diagnosed with a cardiomyopathy at the time of his cardiac arrest and that it was not felt to be due to blocked coronary arteries/MI. Cardiomyopathy can be caused by viral infections or nonspecific inflammation of the heart muscle and would have nothing to do with diet.

Trager also stated that Atkins, as a result of the cardiomyopathy, had developed heart failure (CHF) and the pumping ability of his heart (ejection fraction) had dropped to 15% to 20%. While CHF can be due to heart attacks causing heart weakness in Atkins case it appears it was unrelated to fatty blockage of the coronary arteries causing MI and therefore likely not related  to his diet.

What Does Atkins Death Tell Us About His Diet

The information about Atkins death tells us nothing about the effectiveness or dangers of his diet.  In one individual it is entirely likely that a genetic predisposition to cancer or heart disease overwhelms whatever beneficial effects the individual’s lifestyle may have had. Thus, we should never rely on the appearance or the longevity of  the primary promoter of a diet for the diet’s effectiveness.

The evangelists of low-fat, vegan or vegetarian diets like PCRM have shamelessly promoted misinformation about Atkins death to dismiss high fat diets and promote their own agenda. If their diets are truly superior it should be possible to utilize facts and science to promote them rather than a sensationalistic, distorted focus on the body of one man who slipped on the ice and fell to his death.

24 thoughts on “The Distortion of The Death of Dr. Robert Atkins Continues”