Premature Atrial Contractions: Are They Benign Or Malignant?

In the last few weeks the skeptical cardiologist has had a run on patients with premature atrial contractions (PACs).

I’ve discussed in detail premature ventricular contractions (PVCs) here and here. They are the most common cause of an individual feeling that their heart is skipping a beat or fluttering briefly, something we term palpitations.

Premature beats, which can be either PVCS or PACs, in addition to causing palpitations, are the most common cause of an irregular pulse detected by a blood pressure device or a health care worker,

Like PVCs, PACs occur when electrically active tissue in the heart decides to fire off (or depolarize) before it has received the signal from the normal pacemaker of the heart, the sinus node. In the case of PACs, the rogue tissue is in one of the atria, the upper chambers of the heart.

In the ECG recording below, the PAC (labeled APC) occurs earlier than expected (prematurely). The normal (sinus) beats occur at regular intervals and are all preceded by p waves of normal configuration which are the normal electrical signature of atrial contraction. The larger spike that follows the p wave (the QRS complex) represents ventricular depolarization and is unchanged from the normal sinus beats because activation of the ventricle is normal with PACs. 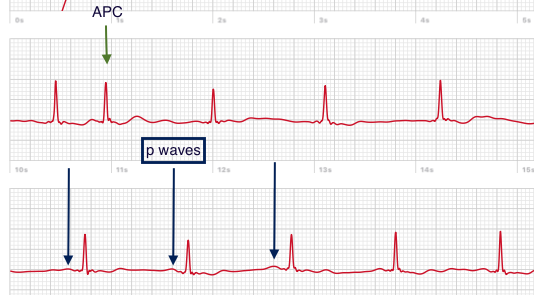 These early beats, in and of themselves, are felt to be benign.

They are extremely common when we monitor ECG rhythm for an extended period, even in young, totally normal individuals. More common, in fact, than PVCs.

For example, in a select group of male aviators

Thus, the majority of the time we will see some PACs in normal subjects who we monitor for 24 hours by ECG.

It was also common to see two PACs in a row (an atrial couplet or pair). Atrial couplets occurred in 14.5% of these aviators.

The highlighted box from the 3 lead Holter monitor recording below shows an atrial couplet.

When 3 or more  premature atrial beats occur in a row, we start calling this nonsustained supraventricular tachycardia.

PACs Are More Common As We Age

One study found that in normal individuals over age 50 years , 99% had at least 1 PAC during 24 -hour Holter monitoring. The PAC prevalence strongly increased with age from about one per hour in those aged 50 to 55 years to 2.6 per hour among those aged ≥70 years.

Another study analyzed 24 hour holter recordings at 5 year intervals and found the frequency of PACs (and PVCs) increased significantly in all age groups over that time span.

Not uncommonly, when a patient has PACs, especially if they are frequent, computer ECG interpretations mistakenly diagnose atrial fibrillation. This happens regularly even with a full, medical-grade 12-lead ECG. Fortunately, such ECGS are still over-read by cardiologists who usually make the correct diagnosis.

The computerized algorithms that single lead mobile ECG devices like Apple Watch 4 and AliveCor’s Kardia similarly are frequently confused by premature beats, especially APCs. I wrote about this in detail in my post on PVCS and PACs here.

Sometimes the devices will diagnose “possible atrial fibrillation” in a patient with frequent PACs in sinus rhythm and sometimes “unclassified.”

In addition, patients with very frequent APCs show a higher tendency to develop atrial fibrillation and a higher risk of cardiovascular complications.

The Various Names Of The Extra Beats

Whereas a consensus has been achieved (for the most part) on the term for early beats from the ventricles (premature ventricular contractions or PVCs ) the term for PACS varies from one cardiologist to another and one paper to another.

If I enter in

into my EMR problem list search, multiple naming options appear (all with the same ICD code of I49.1)

In addition, you  may also encounter the terms atrial ectopy, premature atrial beats or various combinations of “supraventricular” with either contraction, beats or ectopy.

The two most popular acronyms are APCs or PACs and I am guilty of using these interchangeably and seemingly randomly.

Through most of my cardiology life I had considered PACs to be totally benign. And certainly, in and of themselves they cause no problems other than occasional palpitations. However, studies in the last decade have shown consistent associations between frequent PACs and stroke, death and atrial fibrillation.

Some researchers have suggested the concept of “atrial cardiomyopathy” to explain this association. A diseased atrium could be the reason for PACs and atrial fibrillation as well as stroke and death as opposed to atrial fibrillation being the primary cause of increased cardiovascular events.

Clearly, PACS, stroke and CV disease share common risk factors such as age and obstructive sleep apnea making cause and effect difficult to sort out. Could PACs and atrial fibrillation represent different phenotypes of atrial cardiomyopathy?

These data on frequent PACs raise a whole host of questions which remain unanswered.

Is there a frequency of PACS ( say >100 per 24 hours) which is useful in predicting adverse outcomes?

Are there clinically measurable predictors of which  patients with frequent PACs are most likely to have to poor outcomes?

Does treatment of PACs (say with anticoagulation therapy or suppression) in the absence reduce risk of CV events?

The Bottom Line On PACs

39 thoughts on “Premature Atrial Contractions: Are They Benign Or Malignant?”