A Septuagenarian Hockey Player With Subclavian Stenosis Hangs Up His Skates

Three years ago I asked “Is There A Difference in Blood Pressure Between Your Right and Left Arms.?”

In that post I stressed the importance of measuring at least once the “interarm BP difference” (IAD) and I promised to give a second post which would “give my recommendations on how to reliably measure IAD and ….tell the story of a 75 year old competitive ice hockey player with a totally blocked subclavian artery to his right arm.”

I saw that remarkable patient, Alan Gerrard, in follow up recently and the visit reminded me of my promise. After 25 years of playing competitive hockey he had finally decided to hang up his skates and retire from the sport he loves.

Here’s what I initially wrote:

The skeptical cardiologist started thinking about IAD because of Alan Gerrard, a most remarkable 77 year old who is still playing competitive ice hockey. Last year an errant hockey puck shattered his shin bone but after 6 months of recovery he is back on the ice, older by 11 years than his nearest competitor.

Alan has noted since his time in the military that the blood pressure in his right arm is significantly lower than that in the left. In fact, he would routinely ask that his BP be taken in the left arm to avoid being diagnosed with hypertension.

The pulse in his right wrist is much weaker than that in his left.

A few years ago, after identifying this IAD, I had him get an MRA of the arteries coming off his aorta and it  blockage of the right subclavian artery which supplies blood to the right arm.

Since identifying this IAD we exclusively utilize the left arm BP to guide treatment of his hypertension.

At home he keeps a meticulous journal of his right and left arm BPs and brings them in for me to review at office visits.

In the first column he records his left arm BP 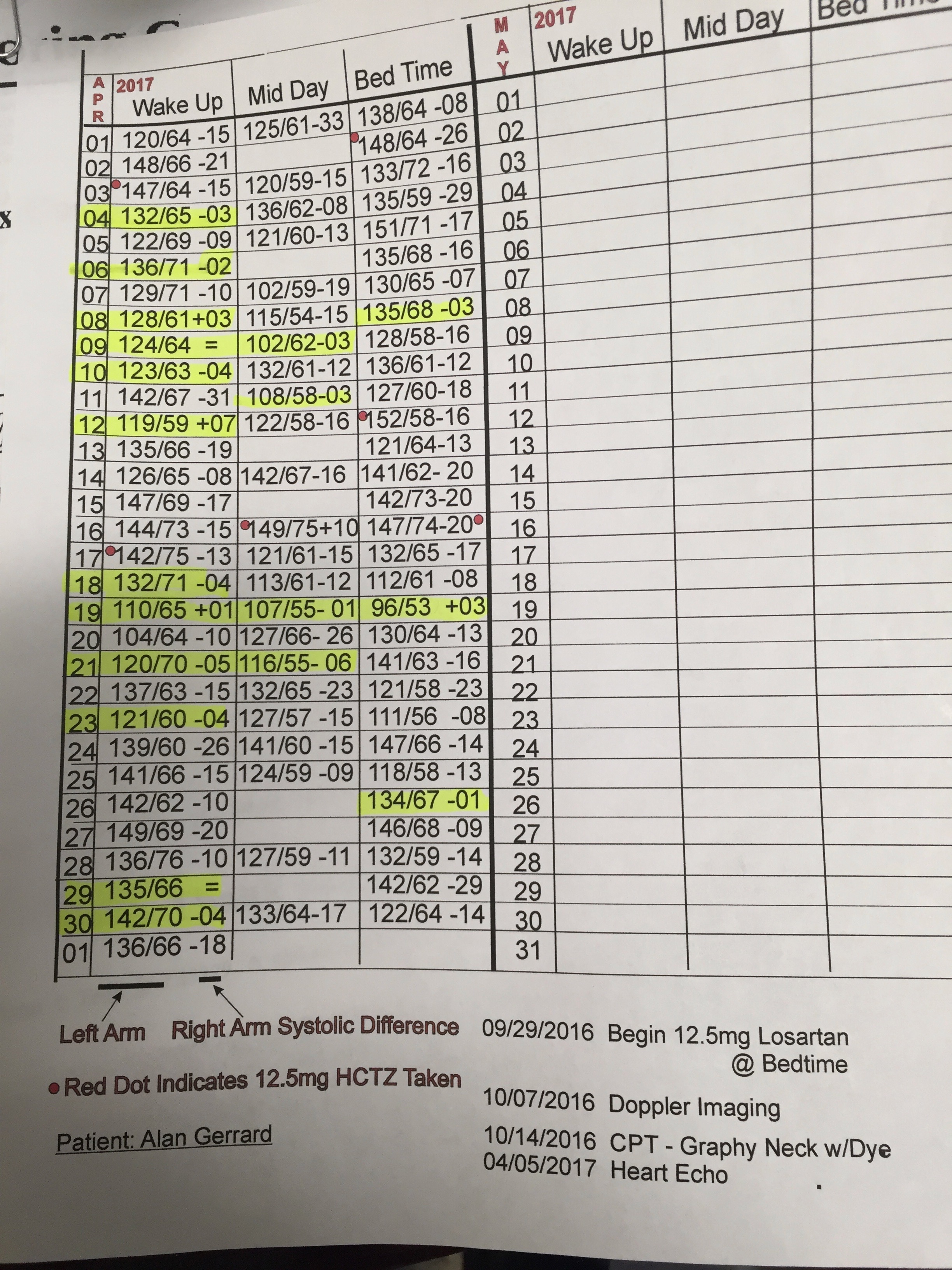 Interestingly, there is a marked variation in the IAD, as it ranges from  +7 to minus 31 (averaging 10 mmHg)

The average systolic blood pressure in both the right and left arms was identical at 139.

Alan, also shares with me at our office visits a beautiful color-coded graph of his right and left arm BPs which are recorded daily without fail.

At our most recent visit he pointed out that when he was in Colorado at high altitude his blood pressure significantly increased (which, according to a recent European Society of Cardiology report is common.)

Providing Alan’s story was the easy part of my promise. Providing the best method for determining IAD turns out to be much more complicated and likely explains why I never wrote the follow-up post.

It also likely explains why 71% of patients in my poll have never had the IAD checked by a doctor (see below.)

A 2014 study found 8.6% of diabetics had an IAD >10 mm Hg. These patients were 3.5 times more likely to die from cardiovascular disease. An IAD>15 mm Hg conferred a nine-fold increased risk of cardiovascular mortality.

This is how IAD was assessed in this British study:

They utilized two automatic Omron BP devices. The authors recognized the difficulty of this technique in routine clinical practice:

Here’s what I will be asking my MAs to do to assess IAD:

Simultaneously measure BP with automatic cuff on one arm and manual cuff on the other. Switch arms and repeat measurements.

This should be done at least once on all patients with hypertension or diabetes.

For those wishing to test at home who only have one cuff I would suggest the following protocol:

Rest for 5 minutes in a chair. Check left arm BP. Switch cuff to right arm and measure twice. Switch cuff to left arm and measure. Perform this set of measurements one first thing in the morning and once after dinner. If a significant IAD difference (>10 mmg Hg) is noted on the averaged readings repeat the whole process two more times and if it persists report this to your doctor.

If you note a significant IAD always utilize the arm with the higher BP for measurement. 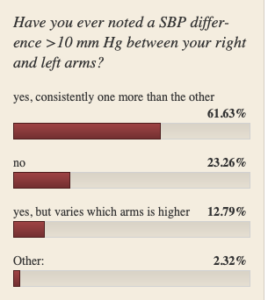 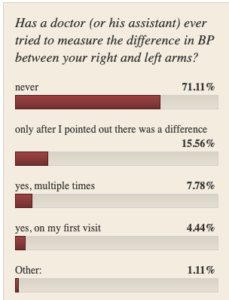