The Full Omron HeartGuide Review: Is This Wearable Wristwatch Blood Pressure Monitor Right For You?

The Omron HeartGuide (OHG) is a digital wristwatch that takes oscillometric measurements of blood pressure. Named to TIME Magazine’s Best Inventions of 2019 list, the promise of this device was succinctly summarized by an Omron executive: “Integrating a blood-­pressure monitor into a sleek watch that also measures sleep and activity makes staying on top of cardiovascular health easy and provides a fuller picture of overall wellness.”

Previously on the skeptical cardiologist, I described my excitement at the HeartGuide’s ability to “serve as an accurate and unobtrusive daytime ambulatory blood pressure monitor.” After wearing the HeartGuide for a week and using it in a variety of situations to measure my blood pressure I had begun rethinking my usual recommendation against wrist blood pressure cuffs.

For me, the great attraction of the OHG was and still is the ability to measure your BP “anytime, anywhere.”

Despite my unabashed enthusiasm for the Heart Guide’s ability to provide facile daytime BP monitoring, certain limitations need to be recognized.

Herein is my more detailed, objective and pragmatic review of the device.

What Is In The Cube?

The OHG  is available on the Omron website for $499 but upon checkout currently, Omron is providing a 10% discount along with free economy shipping. The device is available in medium and large wrist sizes. I sized my wrist as a medium using the measuring tool on their website.

The OHG ships in a black cube.

Inside the cube you will discover:

The OHG is large but stylish in appearance. It weighs 115 grams and the watch dial has a diameter  of 1.9 inches.

I found it took about 2 hours to fully charge the battery and that the device remained charged for about 48 hours.

For accurate BP measurement, it is important to follow very closely the directions Omron provides.  The band should be positioned about 1 inch (2 fingers) below “the base of the hand.” The fit should be “snug.” Your index finger should not easily slide between the band the wrist.
The instructions ask you to sit in a chair for measurement and “position at heart level.” However, as I discussed in my previous post I found that I could make BP measurements under a variety of circumstances beyond chair sitting.
The OHG is fairly finicky about stability and positioning.  The directions for positioning state “position HeartGuide at heart level with 2 inches space between wrist and chest.” To ensure accuracy “do not bend your wrist or look at the display during measurement.”
Here’s what Omron says about its “Heart Zone Indicator”:

It’s not clear to me how the OHG knows that it is at heart level. I experimented with various positions including lying on my back and standing with my wrist definitely at heart level. Sometimes the OHG agreed, others not.

It is clear, however, that it does not like significant movement. It would not make a measurement if I was walking at any speed or while exercising on an elliptical or stationary bicycle.

The entire process takes over a minute and is significantly slower than the upper arm BP cuffs I have been using.

When completed, the cuff deflates and the systolic and diastolic blood pressure along with pulse rate are displayed. 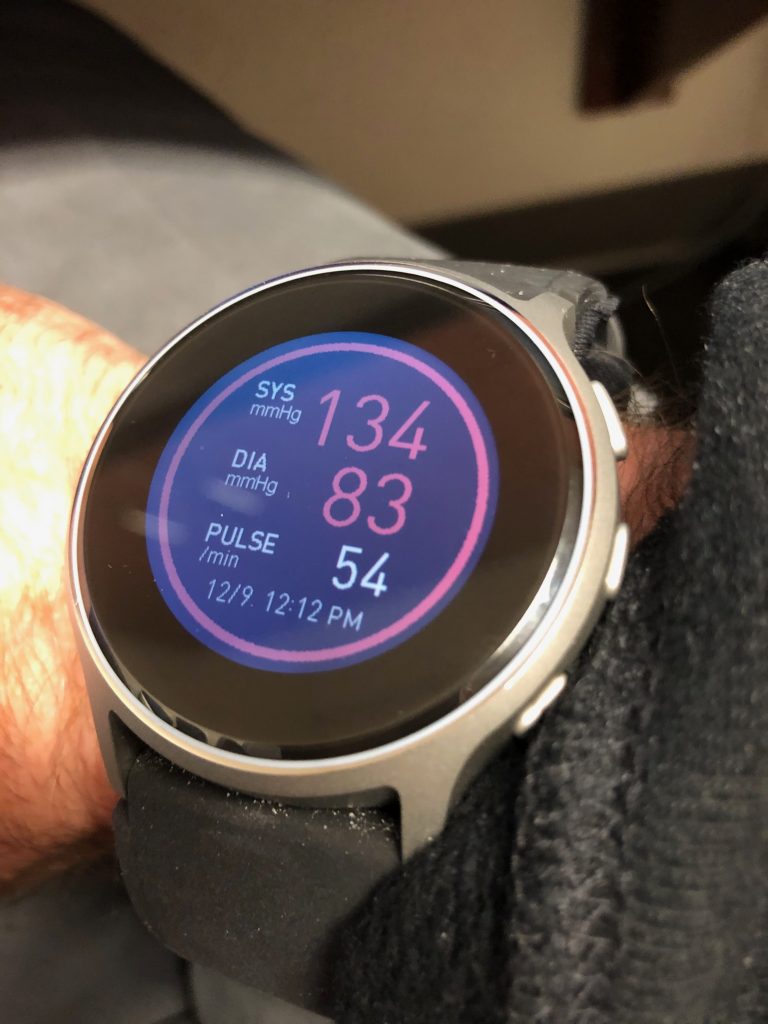 Not infrequently after triggering the device  I received an error message. Most commonly I encountered  Errors 4 or 5 which indicates excessive movement or talking

Before I could recommend the OHG in particular or wrist BP cuff devices, in general, I needed to know how they compared to the gold standard brachial artery, upper arm BP cuff.

I asked Omron for data supporting the accuracy of the OHG and they provided me with a copy of a 2019 paper entitled “Validation of two watch‐type wearable blood pressure monitors according to the ANSI/AAMI/ISO81060‐2:2013 guidelines: Omron HEM‐6410T‐ZM and HEM‐6410T‐ZL”

The lead author of this study is an MD, PhD working at the Jichi School of Medicine in Japan and his 3 co-authors all work for Omron Healthcare, Kyoto, Japan, which provided funding for the research so this skeptical cardiologist takes this information with a grain of salt.

The researchers concluded that both the large and medium wrist HeartGuide devices were accurate and fulfilled criteria set by the American National Standards Institute, Inc/Association for the Advancement of Medical Instrumentation/International Organization for Standardization.

Here are the Bland-Altman plots from that study 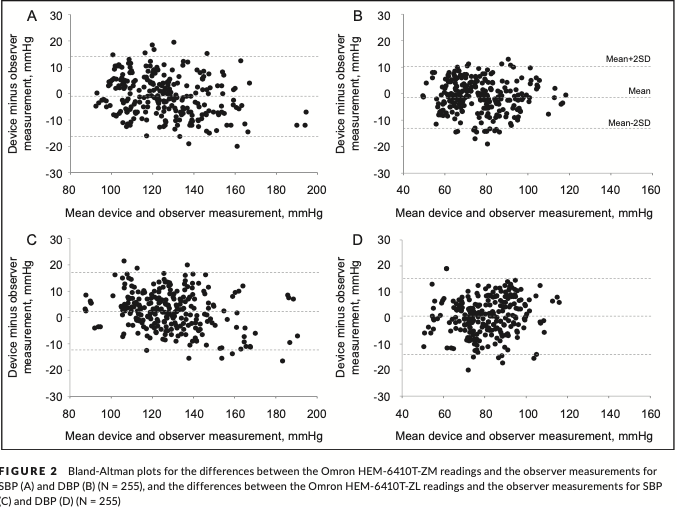 Note that although the average difference between the reference BP and the HeartGuide systolic BP is close to zero there is a significant variation from zero for individual measurements with some 20 mm Hg higher and some 20 mm Hg lower.

My experience confirms this significant individual variation. I took a number of simultaneous measurements using the HeartGuide on one wrist and a brachial BP cuff on the contralateral arm. I did this over multiple days under differing circumstances and with the devices on different arms.

I made similar measurements on other volunteers and found some had consistently identical wrist and brachial SBP whereas others had consistently higher blood pressures by wrist compared to brachial techniques.

Because of this individual variation I highly recommend users calibrate the OHG (or any wrist-based BP cuff) versus a standard BP cuff over a series of days with multiple measurements to see how the two measurements compare. If you find a consistent over or underestimate then the device can be used with this known adjustment.

The OHG is big. and it is bulky. The fastening strap is made of thick rubber and underneath that is the inflatable microcuff which works like the larger cuffs designed for brachial/upper arm measurement.

I was always aware of something on my wrist when I was wearing it. The OHG cannot be accessed if you are wearing a coat or any garment with thickish sleeves. Getting most upper garments on and off while wearing the OHG is a chore.

In the picture below you get a feel for how the OHG interacts with long sleeve garments. My shirt sleeve would not slip over it. When I was wearing a coat or sweatshirt I could not access or view the OHG as its large size prevented pulling back the sleeve. 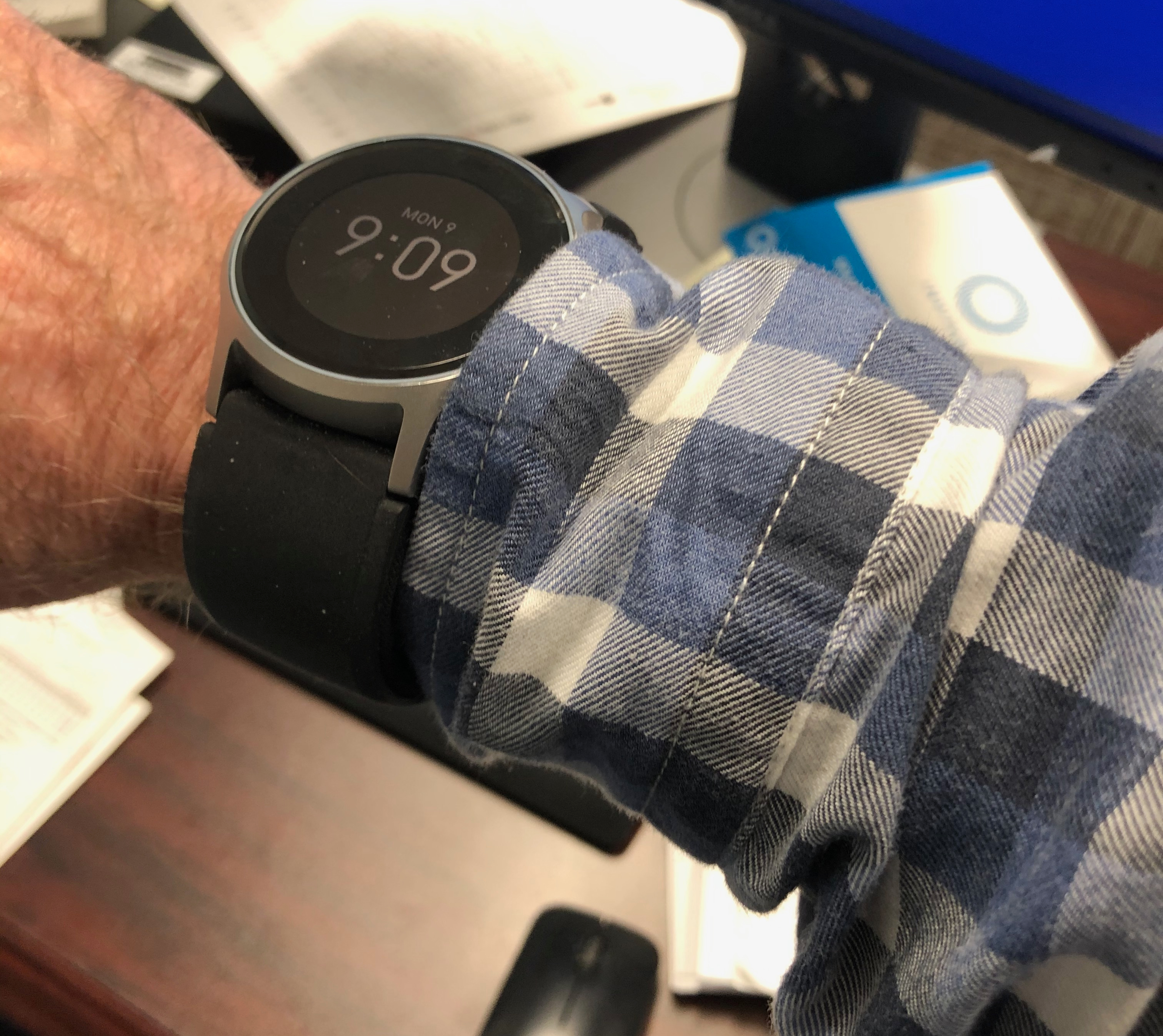 Some Other Things the OHG Does

The OHG measures steps and it tells time. Omron also indicates it can be used to measure sleep quality. Frankly, I  did not test this feature because I felt I would not be able to sleep comfortably with the device on my wrist. Data can be exported from the Heart Advisor app by email in either an Excel or PDF file. This feature would allow the user to conveniently send recorded BPs to their physician.

I am still a fan of the OHG despite the limitations I have indicated above.

I don’t see most people using the OHG as their every day smartwatch The inconvenience and discomfort factors for most will outweigh the benefits.

However, I do see a very beneficial role in wearing the OHG periodically for targeted purposes. For example, it could be worn to work once per week to determine how one’s blood pressure is reacting to stressful situations or to the gym to assess one’s blood pressure before and after a workout. At least one study suggests that BP obtained at work is superior to 24 hour or sleep BP in predicting end-organ damage (manifested by echocardiographic left ventricular hypertrophy) from hypertension

If Omron can develop a method for the device to automatically trigger during sleep and provide accurate nocturnal BP measurements this would be a huge advance in the management of hypertension.

N.B.Technical Specifications for the OHG

13 thoughts on “The Full Omron HeartGuide Review: Is This Wearable Wristwatch Blood Pressure Monitor Right For You?”