Today’s post comes from the Wally, the life coach of the skeptical cardiologist,  who (ultimately) relates what happened when he agreed to do a blood pressure experiment in exchange for medical advice.

I used to work for a company that, for a short time, rewarded healthy employees with lower insurance premiums. They based your score on body-mass-index (BMI), cholesterol, and blood pressure (BP). At the time, I was riding a bike a lot so my BMI was acceptable. My cholesterol was also within range since I take a low dose of a statin. But, my blood pressure? I’ve been doing battle with my blood pressure since the 1980s. So, on the morning of the screening, I took precautions: no alcohol the night before and no coffee before the test. Let’s talk about coffee for a moment: I’m an engineer and we use coffee for fuel. Never hire an engineer who doesn’t drink coffee. In fact, here’s how I interview a new engineering candidate:

Back to the morning of the screening: I had no coffee and I may have had low blood sugar. I got in my car and started backing out. It’s 6:30AM and dark outside – backing, backing, backing, CRUNCH. In spite of having a backup camera I still somehow managed to hit my daughter’s car. I’m sure that sent my BP up. Fortunately, I had calmed down enough to pass all of my tests by the time I got to the screening center 30 minutes later.

On another morning I had to go to the dentist – I always go early so that I don’t miss any work. So, with three cups of coffee in me I hit the road. Of course, I didn’t take traffic into consideration and  I was 10 minutes late. The staff at the dentist’s office didn’t mind but I was a little anxious because 1) I hate to be late and 2) I was at the dentist’s office.

They have me sit in the adjustable padded chair and ask me the usual questions about changes in the meds I’m taking. While that’s going on, I’m trying to remember if this is the visit where they take X-rays or the visit where they use a needle to evaluate the pliability and travel of my gumline. Trust me, the gumline eval is not fun and as I start to think it’s going to happen, the hygienist puts a small integrated blood pressure cuff on my wrist. Really? You’re about to poke sharp things into my mouth and you’re measuring my BP? Of course, it’s terrible. They measure again: not so terrible. And on the 3rd measurement? Back to terrible.

Ever hear anybody say, “The dentist sure was fun today!” No, you haven’t. That sentence has never been spoken – unless the valve on the nitrous tank was leaking. This guy though, he liked to visit his dentist: 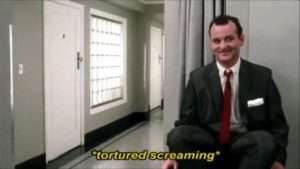 I had a semiannual physical coming up and I realized I better follow my doctor’s advice from my last visit and measure my BP first thing in the morning – before the coffee. Now, I have an old blood pressure cuff that I bought at a garage sale about 20 years ago and it still worked. But I started wondering how accurate it was given its age. So I went shopping on Amazon and decided to buy the same wrist cuff that they use at the demented dentist office. The morning after it came, I measured my BP and… well it wasn’t very good. So, I called my good friend The Skeptical Cardiologist and asked for his advice. And he graciously agreed to help – for a price. We made a deal: he would guide me on my journey to a lower BP. In exchange I would collect some data and provide an opinion on the different cuffs.

In other words: I volunteered to be the SC’s Lab Rat. At first I was proud that he was considering me to provide invaluable data. But, as time went on, I started thinking this might have been his revenge for a laboratory mishap that I caused when we were undergrads. Anyway, on to the experiment! 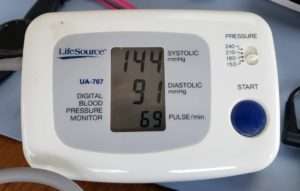 Your basic brachial BP cuff purchased at a garage sale. 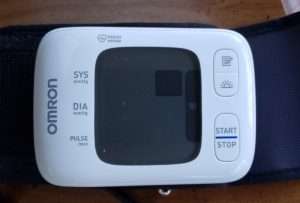 New. Can save data to your phone via bluetooth. Small.

First thing in the morning:

I’m a lousy scientist. I started off with good intentions but pretty soon, I started forgetting the evening measurements. And then, when I saw that there wasn’t too much deviation between the measurements on my left and right arms, I only made left arm measurements.

Here are the first two days of data:

The BP measured on my right side was lower in the morning and higher with the wrist cuff in the evening.

On the 2nd day, left and right were more consistent but the wrist cuff was higher in the evening. About this time, I was already getting annoyed with the wrist cuff and decided to return it. My reasons for this are detailed below.

I continued to measure my BP in the mornings using just the LifeSource cuff:

Other than the data from 1/5/20, there appears to be reasonably good correlation between the left and right arms.

Note the 12 day gap between the last two data sets. That’s because:

On the morning of January 8th, the LifeSource UA-767 blood pressure cuff crashed and burned on my kitchen table. The root cause of the failure was a small molded rubber doohickey that acted as an attachment point for the air system in the meter. I now had no means of measuring my BP. The experiment was over.

Review and Wrap Up

First of all this was not a very scientific experiment. By changing my meds I was able to get my BP down but I failed to collect all the data that the SC asked for. The reasons for this were 1) I returned the Omron wrist cuff early, 2) I kept forgetting to take my BP in the evening (it was a little crazy at my house over the holidays), and 3) the LifeSource died.  But I had used both instruments long enough to form an opinion:

I had high hopes for the Omron wrist cuff – it was new, and it was small with none of the awkwardness of the more traditional brachial style cuff. But I quickly started finding flaws:

On the plus side the Omron did come with a small plastic case and didn’t take up too much space. And it had Bluetooth which allowed me to save my measurements on my phone using their app.

The LifeSource was a boring old fashioned BP Meter that got the job done – until it died. My only complaint about these devices is that they’re awkward to store. There’s the cuff, the base, and the rubber tube connecting the two. Combined these things always get tangled up with other stuff.

The old fashioned arm cuff is the way to go based on my experience. Yes, they’re awkward but they are solid and less prone to error. Because of this, I replaced the LifeSource with an Omron arm cuff monitor. And for storage I also bought a small enclosure for it.  And as for my BP, I was able to get it down in time for my doctor’s appointment.

We met our freshman year at Oklahoma University and Jerry claims my first words to him were “Are you ready for the country?”